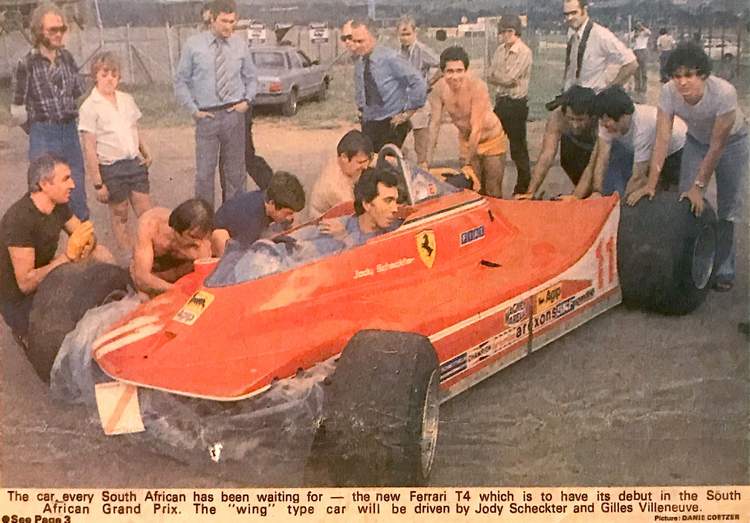 Taken on Tuesday 20 February 1979 on the first afternoon of that year’s Kyalami Formula 1 test, this image appeared on page 3 of the next morning’s Rand Daily Mail.

This was the first time anyone had ever seen the 312 T4, seconds after it rolled out of a closed trailer after being flown straight from Rome to Johannesburg on an Alitalia 747 en route to Kyalami.

This photo was taken behind the pits (that’s the concrete wall adjoining the Dunlop bridge) before we pushed it up to the box under the control tower. They had been running a T3 that morning while they waited for this car to arrive – Jody then tested this car from the Wednesday, while Gilles carried on with the T3 before his T4 arrived over the weekend.

This picture captures the essence of those days so brilliantly — the team lads are protecting the skirt on the right of the car and that’s me on the left rear tyre (far right of the pic). Behind the car looking on from left to right, some proper South African Legends, are Ben Morgenrood in the check-shirt and George Fouche is the school kid, then behind the roll hoop in the blue shirt and dark tie is Jack Nucci and the dude behind him in the short pants, hands on hips is John Love and the guy next right (tan shirt, dark pants, arms folded) is Wayne Taylor!

When I got back to technikon on the Monday two weeks anon and presented my doctor’s note, the lecturer took this edition of the newspaper out, turned to the photo and asked me what the fuck!