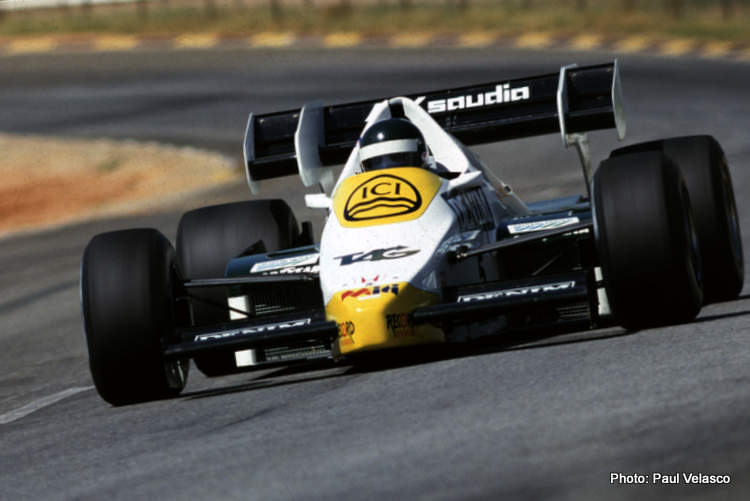 Not long ago I was reminded about the first cover photo I had published in Autosport back in 1984 as a 22-year-old photographer based in Johannesburg, living within 20-minutes drive from Kyalami.

I had been going to the South African Grand Prix venue since I was a kid, where I watched Mario Andretti win the 1971 edition of the race courtesy of my Grandfather, whose racing blood I inherited. 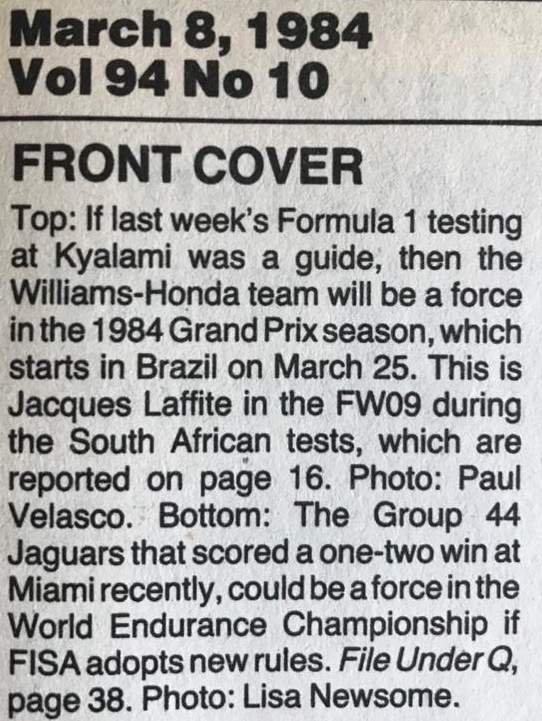 Thereafter, once or twice a month (on national race days, Grands Prix and 9-Hours races) we were there. Sat on a four-step concrete stand (seating about 20 people nice and cosy) at our usual spot on the outside of Barbecue Bend, with a view of them rushing out of Crowthorne, dashing past us up the hill to Jukskei and disappear as they dip into Sunset.

Lunchtime we would scoff our packed lunches, and stroll through the pits where we would hang out for half an hour before returning to our spot for the rest of the event. We did that for almost a decade.

Growing up as a lanky teen, there was never a chance I was going to be a race driver, tall guys (over six foot or 183 cms) rarely raced in those days. It was a sport for short-shits in my time which, in retrospect, might be a good thing in terms of my personal longevity.

Instead, I became a photographer with motorsport my pride and passion, Kyalami my playground, my school, my temple, my track and as a result, I photographed just about everything that happened there through the eighties and into the early nineties.

In March 1984, Formula 1 teams were in Johannesburg – drivers and team crews staying at the famous Kyalami Ranch hotel, walking distance from the circuit – for a week of testing. While Europe was freezing, our spot was sizzling thus no surprise that substantial preseason testing took place down in southern Africa.

From day one I was there starting 8am in the morning and fully pumped for the days ahead. I recall the balmy hot days, as they tend to be in the height of summer in the area. Flicking on my mind’s eye, I can still feel the heat, smell the smells of those days in the company of my heroes.

Testing at the time was amazing for a photographer. No massive media accreditation hassles, no influencers, no bullshit artists, no crap. Pure motorsport. Top drivers, out in the sun, testing the machinery they would be using for the 1984 Formula 1 world championship season.

In days long before WhatsApp, digital photos and mobile phones, I was approached by Jeff Hutchinson (Autosport correspondent covering the test at the track) to shoot some pictures whereby we did a deal for him to take the films back to Europe, get them processed – use what they needed – and return the slides and negatives for an agreed fee.

For me it was surreal, I was commissioned by Autosport!

Four days of bliss, shooting F1 testing and getting paid by my bible of motorsport – that magazine was my university, not just F1 but motorsport in general – I gobbled them up cover-to-cover every Thursday for decades.

Now I was going to have pictures in that very magazine! For a motorsport-mad kid my age, it was the greatest honour. Only disappointment was that Ferrari decided to stay in Europe with Tyrrell and McLaren joining them at Paul Ricard.

But most of the other heavy hitters were there in what was the final preseason test that year.

It was an intriguing test as F1, at the time, tried to limit the fuel feeding those thirsty first era turbos that were pumping out north of 1300 bhp when fully dialled up for qualy. But that just made engine builders seek more fuel economy without sacrificing the horses, and that only works if you throw tons of money at it.

Thus the regs supposed to limit spending actually made teams spend a great deal more as they collectively pushed the envelope to win races on Sundays. Sound familiar?

Nevertheless, it was a relaxed but intriguing week which included several lunches at Kyalami Ranch with drivers and team personnel, before a return for an afternoon of testing that ended around 5pm local time or when the traditional highveld evening rains came to stop play. Sunday to Thursday that year.

Recalling the time, there was not a PR pumpkin or spin doctor in sight, only a handful of journos, hardly any snappers and no TV cameras. Drivers would catch some rays, sitting on fold-up chairs, in the pitlane, as mechanics toiled in the heat on the nearby cars. The banter never ceasing and hilarious.

It was a different world, yet the megastars drivers of the time were as mega as they are today, thankfully for photographers of my generation, the access was infinitely more casual and unstressed. No security beefcake barking orders, no aggressive space invasion, while the pollution of selfie sticks and microphones in drivers’ noses were unthinkable.

It was serene, calm and truly blissful, turned heavenly by the screech of those turbos at full tilt, constantly seeking to spit their occupants into oblivion.

The blokes in the cockpit worked up a proper sweat, granted it was sweltering at the time in Joburg, but the look in their eyes as they whipped off drenched balaclava’s told you the real story.

The taming of those beasts was a sight to behold, through Sunset flat-out took the hugest of ball, then onto big brakes into Clubhouse, followed by the cry for traction on the exit to get a good squirt towards the dipping Esses with everything writhing venomously.

And then the wind-up of those turbos, out of Leeukop, as the foot stomped flat, a cacophony of sounds – that shrieked absolute power – had those cars clocking over 325 kph on that incredible main straight.

Coupled to the high altitude of the place, which the most powerful F1 engines ever relished, it was a sight I doubt we will ever witness again.

The necessary violence required by drivers to keep those horses restrained still sends shivers up my spine. It was jaw-dropping to behold and I do recall watching instead of taking pictures (more than once) so bewildering was the spectacle each time they powered by.

Keke Rosberg in the Williams-Honda ended the five days fastest of all, with Nelson Piquet in the Brabham-BMW second best and Nigel Mansell third in the Lotus-Renault; a tad over three-tenths separating the trio.

Also of note that week was rookie Ayrton Senna’s performance in the Toleman-Hart who was seventh quickest, ahead of a season that was to launch the great Brazilian legend’s F1 legacy.

My ‘cover boy’ Jacques Lafitte was ninth fastest, 2.5 seconds down on teammate Keke at the top of the timesheets.

For many years I had the image of the Autosport cover in my mind. Along my journeys, that magazine and many others including negs/slides went AWOL, never to be seen again.

Fast forward to a month ago, revving on full nostalgia, I somehow found the cover in a Google image search and then went on to eBay – found it and bought it immediately and it was delivered shortly after.

Obviously, this tale popped then into my head… 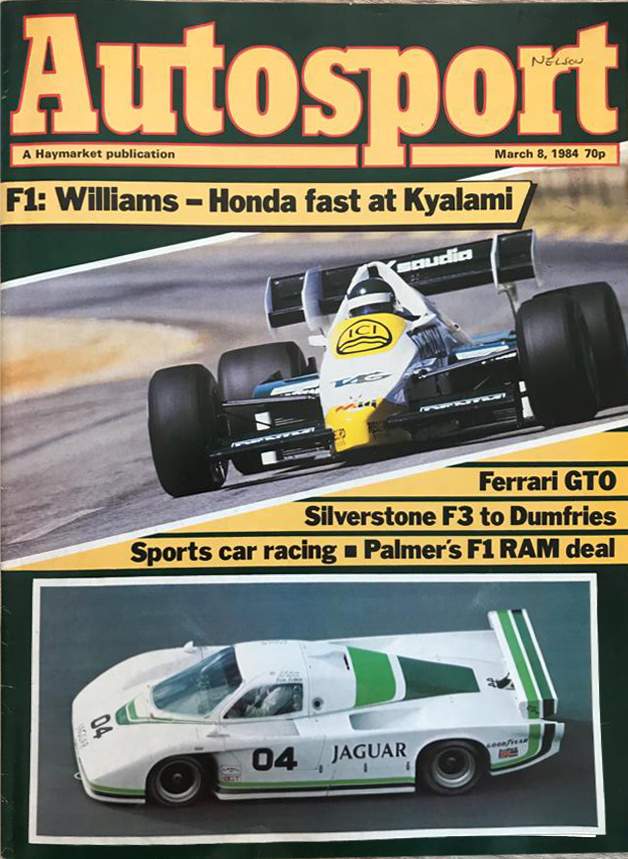 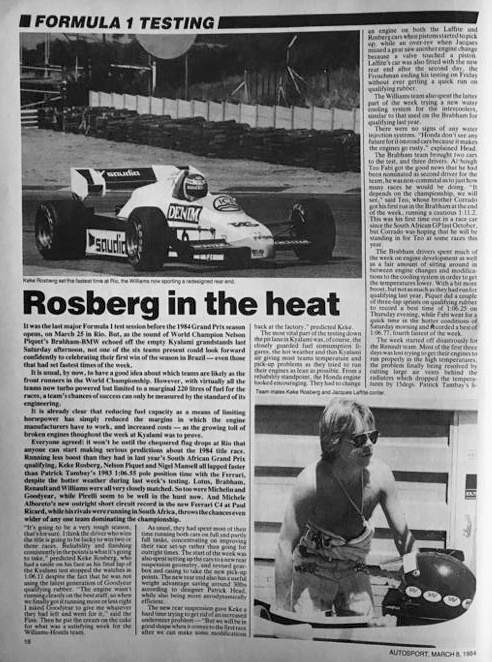 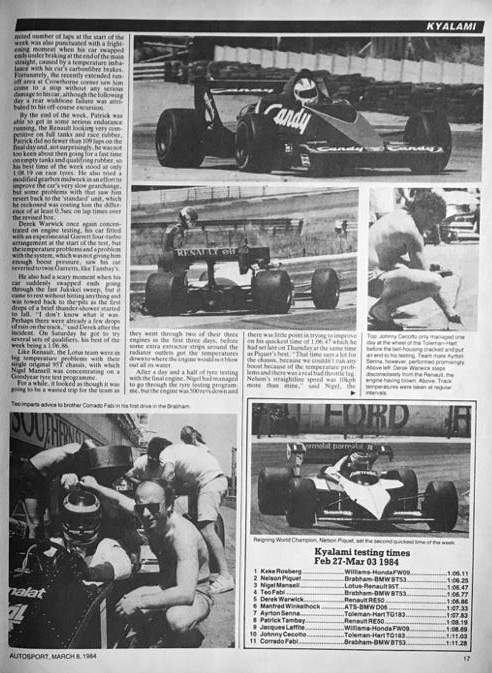 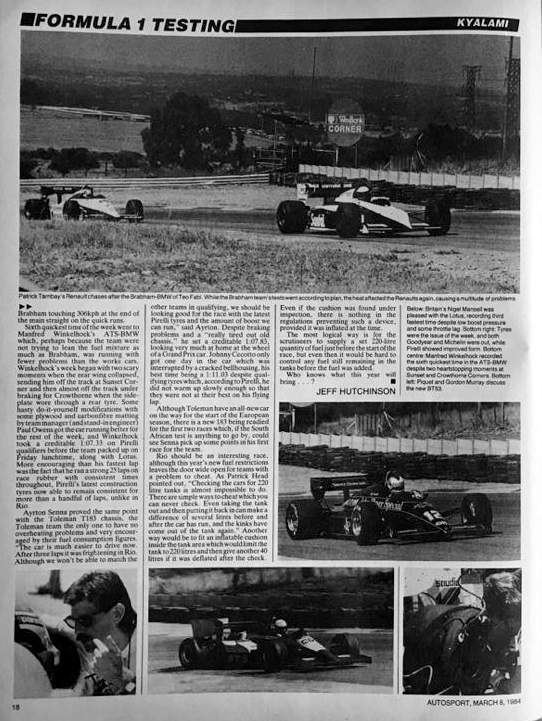