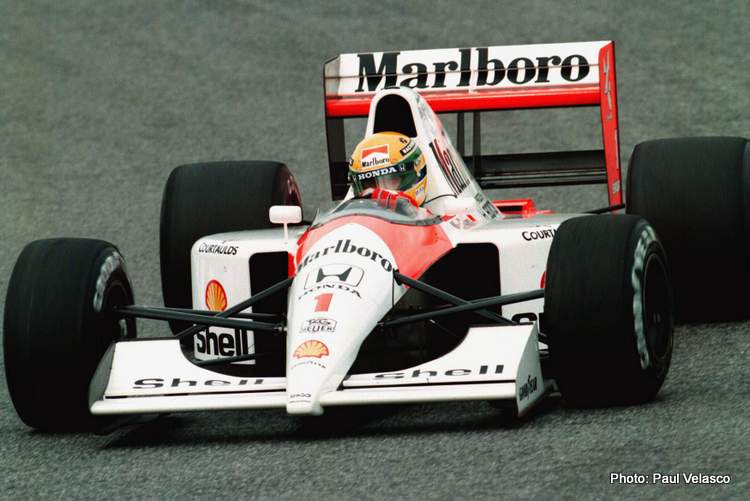 Niki Lauda took his first world championship win driving a Ferrari 312B3 at the 1974 Spanish Grand Prix on 28 April 1974.

In 1996 it was the European GP at the Nürburgring, where Jacques Villeneuve’s Williams FW18 Renault beat Michael Schumacher’s Ferrari by just seven-tenths of a second ,with David Coulthard third in his McLaren-Mercedes on a day where both an underweight Mika Salo and Ukyo Katayama’s push-started Tyrrells were excluded for those different reasons!

Michael Schumacher’s Ferrari F2002 V10 stormed to Spanish Grand Prix victory over Juan Pablo Montoya’s Williams and David Coulthard in a McLaren at Barcelona in 2002, despite Montoya running over his jack man in his stop. Valtteri Bottas won a 2019 Azerbaijan Grand Prix from Mercedes teammate Lewis Hamilton with
Sebastian Vettel’s Ferrari third on a day where Ferrari faltered.

Post WWII, Bob Gerard drove his ERA B-Type to win the 1949 The Jersey Road Race, Luigi Villoresi won the 1951 Mille Miglia in his Ferrari 340 and Michael Andretti won in Indy racing in 1996. In sportscars, Mark Donohue drove Roger Penske’s McLaren 6A-Chevrolet to victory at Riverside, US in 1968 and 1982 Marc Surer and Manfred Winkelhock won the ‘85 Monza 1000 in a Porsche 962.

There were two World Rally Championship rounds on this day over the years – Carlos Sainz steered his Toyota Celica GT to win Rally Corsica in 1991 and Thierry Neuville won driving a Hyundai i20 in 2019.

In other notable motorsport marks on this day, JG Parry Thomas broke his day-old land speed record with a 170 mph run in his Thomas Babs Special at the Pendine Sands, Wales in 1926, while Nick Heidfeld was the first driver in to tackle the Nürburgring Nordschleife in a contemporary Formula 1 BMW Sauber in over 30 years in 2007. Former F1 driver and coachbuilder Piero Drogo died in a car accident aged 46 in 1973.