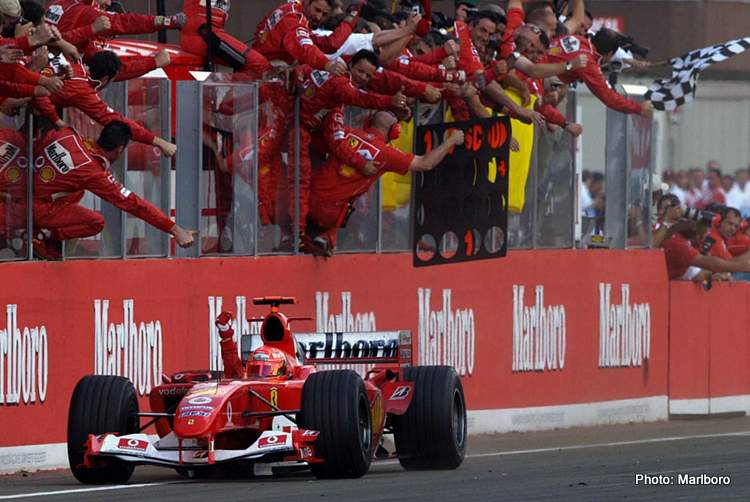 Emerson Fittipaldi drove a great race to climb from seventh on the grid to win the Spanish Grand Prix in his Lotus 72E Cosworth on this day 1973.

He won by 42 seconds from Francois Cevert’s Tyrrell and George Folmer, who started 14th in his Shadow after pole man Ronnie Peterson’s gearbox broke.

Patrick Depailler’s Ligier JS11 Cosworth won the 1979 Spanish GP from Mario Andretti’s Lotus and Gilles Villeneuve in a Ferrari at Jarama. Michele Alboretto was then the first Italian to for Ferrari since Ludovico Scarfiotti in ’66 when he converted his first pole position into a race win in his 126C4 in the 1984 Belgian GP ahead of Derek Warwick in his best ever F1 finish in a Renault RE50.

Michael Schumacher won a lucky 2001 Spanish Grand Prix in his Ferrari F2001 ahead of Juan Pablo Montoya’s Williams-BMW and Jacques Villeneuve in a BAR Honda. Mika Häkkinen was leading by 40 seconds when his McLaren Mercedes suffered hydraulic failure on the final lap.

In the fifth Grand Prix on this day, Lewis Hamilton’s Mercedes won in Azerbaijan from Kimi Räikkönen’s Ferrari and Sergio Pérez in a Force India-Mercedes in a 2018 race most remembered for Red Bull teammates Max Verstappen and Daniel Ricciardo eliminating one another.

Nico Hulkenberg won the 2007 British A1 Grand Prix of Nations Feature race for Germany, while Robbie Kerr took a home win for Team Great Britain in the Sprint, ten years before Simon Pagenaud won the 2017 Phoenix Indycar Grand Prix back in the ‘States.

In Sportscar racing, Mauro Baldi and Jean-Louis Schlesser’s Sauber-Mercedes C11 took a notable win in the 1988 Monza 1000, while across the pond, Jan Magnussen, Wayne Taylor and Max Angelelli won the 2007 Virginia Grand-Am race. Sebastien Loeb won two World Rally Championship rounds for Citroen on this day, driving a Xsara in Sardinia in 2005 and in Argentina in a DS3 in 2012, where Ott Tanak also won driving a Toyota Yaris in 2018.

In other racing happenings on the day NASCAR legend Dale Earnhardt was born, Camille Jenatzy became the first man to drive faster than 100 km/h in his electric La Jamais Contente near Paris in 1899, 35 years before
George Eyston managed 255km/h aboard his diesel-powered Flying Spray at the Bonneville Salt Flats, Utah in 1934. German former F1 racer and Le Mans runner-up Theo Helfrich passed aged 64 in 1978.