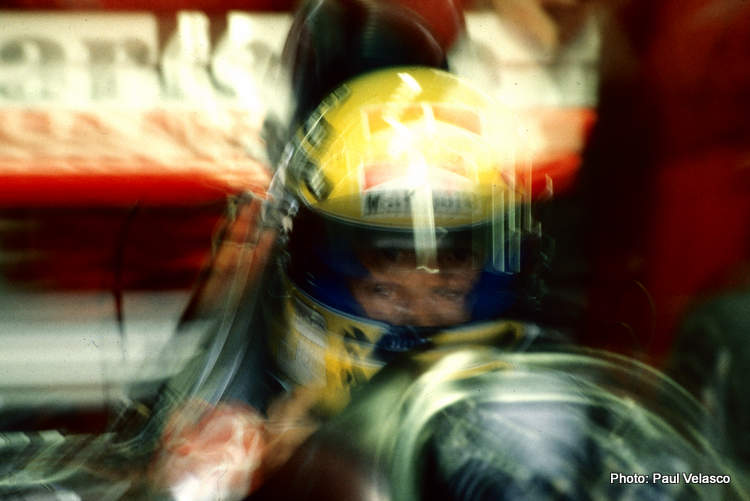 A black day in the middle of a tragic week in race history, 1 May is the day in 1994 three-time Formula 1 world champion Ayrton Senna died aged 34 during the 1994 San Marino Grand Prix in Imola.

Mayday also claimed the first recorded deaths in motor racing when the Marquis de Montignac and two riding mechanics were killed at a race in Périgueux, France in 1898.

1 May however has many racing positives too, not least of all Stirling Moss and Denis Jenkinson’s incredible 1955 Mille Miglia win in their Mercedes 300SLR. Aided by Jenkinson’s pioneering scrolling navigation notes, the pair’s 10 hour 7 minute 48 second victory was by some margin the fastest-ever in that great race.

In other 1 May World Sportscar races, Denny Hulme drove a Brabham BT8-Climax to win at Oulton Park in 1965, Jacky Ickx and Richard Thompson’s Mirage Mk1-Ford won the ’67 Spa 1000 and Danny Ongais took ‘77 Laguna Seca honours in his Porsche 934.

Back to F1, Emerson Fittipaldi won the 1972 Spanish Grand Prix at Jarama in a Lotus 72D from Ferrari teammates Jacky Ickx and Clay Regazzoni. Patrick Tambay dedicated his 1983 San Marino Grand Prix win to his late Ferrari teammate Gilles Villeneuve, who died almost a year before after he led Renault’s Alain Prost and René Arnoux in the second Ferrari 126C2B home after Arnoux spun with three laps to run at Imola.

Ironically, Ayrton Senna was the class of the field as he beat his McLaren Honda teammate Alain Prost and Nelson Piquet‘s Williams Honda to win the 1988 San Marino Grand Prix at Imola. Senna. Michael Schumacher’s Benetton Ford won the tragic 1994 race that claimed Senna’s life from Nicola Larini’s Ferrari and Mika Häkkinen in a McLaren-Peugeot.

In the other grand prix on this day, Nico Rosberg led every lap of the race and set the fastest lap off pole position to take his first grand slam win in Russia, from Mercedes teammate Lewis Hamilton and Kimi Räikkönen’s Ferrari.

Going all the way back to the nineteenth century, Georges Leys’ Panhard-Levassor won at Perigueux in France in 1898, while early 20th-century action saw Harry Hartz’s Miller win on the boards in the US AAA Atlantic City 300 and Ferdinand De Viscay’s Bugatti the Sitges to Terramar, both of those races being in 1926.

Carlos Sainz won one of two World Rally Championship rounds run on 1 May over the years driving a Toyota Celica GT-4 in Corsica in 1991, while Sebastien Loeb won the other in a Citroen Xsara in 2005.

On the day that ‘30s racer Lord Howe and F1 driver Geoff Lees were born, Indianapolis opened for practice for the first Indy 500 in 1911, 91 years before the Speedway unveiled its groundbreaking SAFER Barrier at all four of its corners for.

Staying with Indy, Graham Hill passed his 500 rookie test on this day 1963, the same day that Stirling Moss drove a race car in the year since a huge crash and decided to retire from racing. 1 May was also the day that the great Porsche 917 was approved for competition.