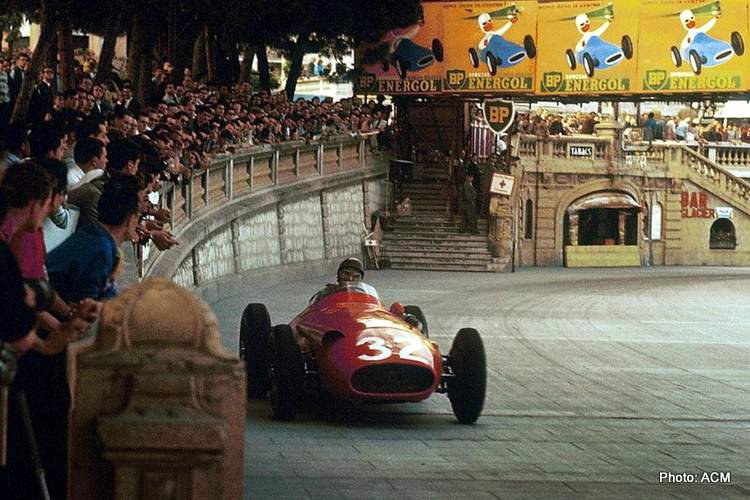 Juan Manuel Fangio’s Maserati kept out of trouble to win a chaotic 1957 Monaco Grand Prix from Tony Brooks’ Vanwall and Masten Gregory in another Maserati.

Stirling Moss’ Maserati was leading Peter Collins’ Ferrari, Fangio, and Mike Hawthorn in another Ferrari, when Moss crashed through the chicane, littering the track with debris as Collins went off in avoidance and Hawthorn hit the slowed Brooks to leave Fangio to grab the lead from Brooks’ damaged car and hold it to the flag.

There was even more Monte Carlo drama in 1985, when Nelson Piquet and Riccardo Patrese crashed out, Niki Lauda spun, stalled and retired in avoidance and Michele Alboreto’s Ferrari went off to hand the lead to Alain Prost’s McLaren TAG Porsche. Alboreto fought back into the lead, only to be slowed by a puncture to drop to fourth, before fighting back to pass Elio de Angelis’ Lotus Renault for second, behind Prost.

And in one of the bigger F1 upsets over the years, Olivier Panis benefited a perfectly timed tyre stop from wet to dry rubber to win his only Grand Prix in Ligier’s last-ever and engine supplier Mugen’s first win after starting 14th at Monaco in 1996. David Coulthard’s McLaren-Mercedes and Johnny Herbert’s Sauber-Ford were the only other drivers to go the distance, setting a new record for the least ever finishers in a F1 GP.

There was only one world rally round where Carlos Sainz’ Ford Focus won in Argentina in 2003, but it was a busy day in sportscar racing. John Surtees and Willy Mairesse’s Ferrari 250P won the ‘63 Nurburgring ADAC 1000, a race Vic Elford and Jo Siffert’s Porsche 908 also won in ’68, as did Jean-Pierre Beltoise and Jean-Pierre Jarier driving a Matra-Simca MS670C in ’74, while Teo Fabi and Derek Warwick won the ’91 Silverstone 1000 in a Jaguar XJR-14

Jacky Ickx won the 1979 Charlotte Can Am in a Lola T333CS-Chevrolet, where Derek Bell and Al Holbert’s Porsche 962 won in IMSA in ’85, while David Brabham and Jan Magnussen’s Audi took the 2002 Grand Prix of Sonoma. Mauro Baldi, Freddy Lienhard and Didier Theys Ferrari 333SP was first home at Watkins Glen in 2003 and Ryan Briscoe and Sascha Maassen’s Porsche RS Spyder took the 2007 Utah Grand Prix.

Team owners Colin Chapman and Willi Kauhsen and F1 and Indy star Dario Franchitti share birthdays on this day. Grand prix winner Otto Merz did aged 33 after an accident at Avus in Germany in 1933, Archie Scott Brown (31), who overcame severe physical disabilities to race with great success, was mortally injured following an accident at Spa and Troy Ruttman the youngest winner of the Indianapolis 500 at 22 years old, passed away at 67 in 1997.