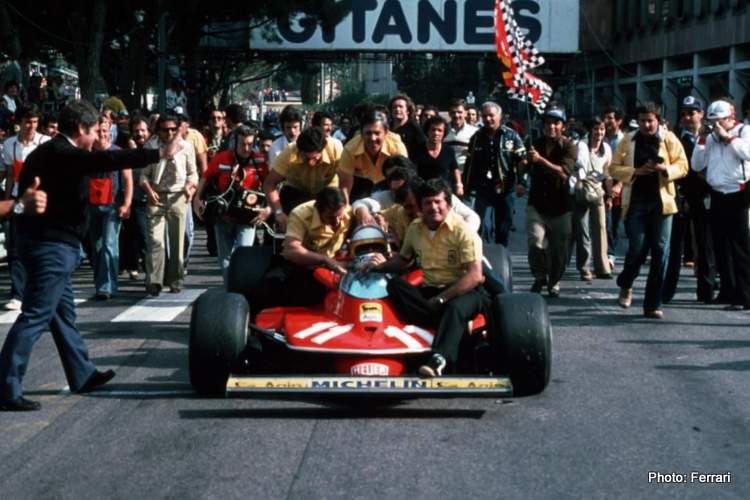 27 May was a busy day both in Formula 1 and at the Indy 500 over the years, starting with Juan Manuel Fangio’s Alfa Romeo won the 1951 Swiss Grand Prix at Bremgarten from Piero Taruffi’s Ferrari and Nino Farina in another Alfa Romeo, while Stirling Moss ended eighth on his GP debut.

The rest of the F1 races on this day were in Monte Carlo, where Jody Scheckter took his second Monaco win in 1979 for Ferrari, from former Ferrari men Clay Regazzoni’s Williams-Cosworth and Carlos Reutemann in a Lotus Cosworth in a race of attrition. Retirements included 1976 World Champion James Hunt from his final F1 race.

Ayrton Senna’s McLaren-Honda started the 1990 race on pole position, led every lap and set the fastest race lap, en route to his second Monaco win to the trot and third in all from Jean Alesi’s Tyrrell Cosworth and Gerhard Berger in the other McLaren.

The other two Monaco wins on this day resulted in Australian Red Bull Renault drivers taking a fully clad swim on the team’s yacht after winning the race – Mark Webber became the record sixth different GP winner of the opening six races of 2012 from Nico Rosberg’s Mercedes and ‘s Fernando Alonso in a Ferrari. Daniel Ricciardo followed his compatriot into the pool with a 2018 win over Sebastian Vettel’s Ferrari and Lewis Hamilton’s Mercedes.

Over in the ‘States meanwhile, Elliott Forbes-Robinson’s Spyder NF10-Chevrolet won the ’78 Charlotte Can Am and in IMSA, Drake Olson’s Porsche 962 took the ’85 win and Gianpiero Moretti and Max Papis’ Ferrari 333SP ’96, both at Lime Rock.

The four-day East African Coronation Safari in Kenya, Uganda and Tanganyika began, as a celebration of Queen Elizabeth II’s coronation in 1953 before becoming the it was renamed the East African Safari Rally in 1960 and the World Championship Safari Rally from the ‘7os.