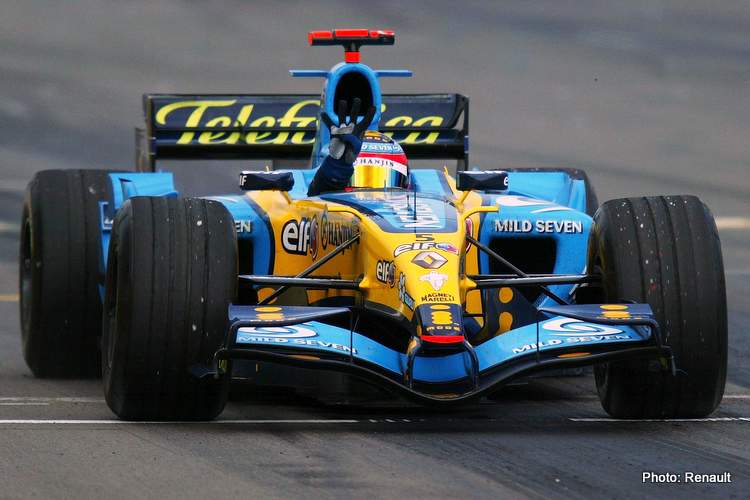 Over the years 29 May has been another busy day of racing on both sides of the pond, with F1 races literally across the globe and several Indy 500s over the years.

It was back to Europe for the 1994 Spanish Grand Prix, where Damon Hill ‘s victory and a Barcelona circuit urgently revised in the interests of safety, was small comfort to a Williams Renault team still reeling from Ayton Senna’s tragic accident. Michael Schumacher overcoming his Benetton Renault stuck in fifth gear for most of the race to end second from Mark Blundell’s Tyrrell Yamaha was however a significant achievement.

Fernando Alonso’s 2005 European Grand Prix win over Nick Heidfeld’s BMW Williams and Rubens Barrichello in a Ferrari, will be remembered as the one that got away from Kimi Räikkönen who crashed out of the lead on the final lap after a suspension failure on his McLaren’s. Räikkönen kept on despite a major vibration caused by a flat-spotted front tyre.

Back to Monte Carlo for 2011, Sebastian Vettel and his Red Bull Renault continued on their merry championship way with another win over Ferrari’s Fernando Alonso and Jenson Button in a McLaren Mercedes.

Lewis Hamilton took his second of three Monaco wins in a Mercedes in 2016 from Daniel Ricciardo, whose Red Bull Renault team cost him victory when they were not ready for a tyre stop. Sergio Pérez was third for Force India.

Over in the US meanwhile, there were several editions of Indianapolis 500 on this day – Bob Sweikert won in a ’55 race marred by the legendary Bill Vukovich’s death in an accident while leading the way to what could have been a record third consecutive win.

Racing was already going strong back in 1901, where not only did Léonce Girardot take his Panhard-Levassor to Gordon Bennett Cup glory, but Henri Fournier sped to Paris-Bordeaux victory aboard his 60 HP 10-litre JAW too. Seven years anon, GP Mills took his Beeston Humber to victory in the splendidly named 1907 Manx Heavy Car Race.

After World War 1, Count Giulio Masetti took the 1921 Targa Florio in a Fiat 801-402 and
Emilio Materassi won the 1927 Coppa della Perugina in his Itala Hispano-Suiza. There were two major races in 1932 – Rudolf Caracciola’s Alfa-Romeo 8C-2300 Monza blasted to victory at the Nürburgring Eifelrennen and Robert Gauthier’s Bugatti T35C won the GP de Troyes in Brazil.

The Nürburgring was also the venue for more recent 1000km World Sportscar races, won by Toine Hezemans, Tim Schenken and Rolf Stommelen’s Porsche 935 in 1977 and Jacky Ickx Jochen Mass in a Porsche 956 in ’83. Vittorio Brambilla also won the 1977 Vallelunga 4-hour on this day in an Alfa Romeo T33.

US sportscar racing was in Lime Rock over the years today, where Bob Bailey and Jim Locke’s Porsche 911 took IMSA honours in 1972, Peter Gregg’s Porsche 935 won in ’78 and Geoff Brabham’s Nissan ZX-T in ’89. Wayne Taylor won in a Ferrari 333SP in ’95 and Butch Leitzinger and James Weaver’s Grand Am Dyson Riley & Scott Ford won in 2000.

There were four World Championship Acropolis Rallies over the years on this day Walter Rohrl won in 1978 driving a Fiat 131 in ‘78, Ari Vatanen a Ford Escort RS1800 in ‘80, Miki Biasion a Lancia Delta Integrale in ‘88 and Sebastien Loeb in a Citroen C4 WRC in 2008. Loeb also won Argentina 2011 in a Citroen DS3, while Mattias Ekstrom won the 2016 British World Rallycross round at Lydden in his Audi S1.