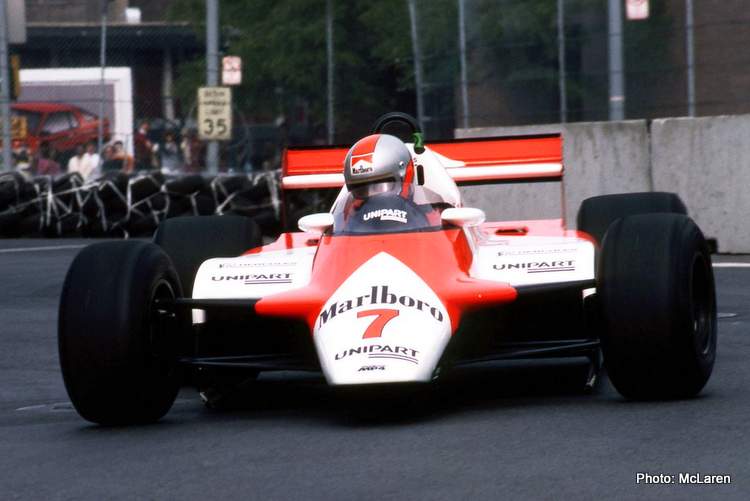 Another quiet but significant day in racing early in June, the sixth is still notable in several respects.

Several teams withdrawing in protest over appearance money, failed to deter a strong grid from assembling at Zandvoort for 1960 Dutch Grand Prix, which Jack Brabham’s Cooper-Climax went on to win from Innes Ireland’s Lotus Climax and Graham Hill in a BRM.

John Watson’s McLaren MP4/1B Cosworth meanwhile climbed from seventeenth on the starting grid to beat the turbos and win the 1982 United States Detroit Grand Prix from Eddie Cheever’s Ligier-Matra and Didier Pironi in a Ferrari.

In other major racing on 6 June over the years, Ferreol Jenatsy’s Pipe won at Namur 1911, Antonio Ascari the ’23 Circuito di Cremona in an Alfa Romeo RLTF and Marcel Lehoux the ’28 GP d’Algerie in a Bugatti 35C. There were two Brooklands International Trophy races on this day won by Brian Lewis in 1933 and Louis Fontes in ’35, both driving Alfa Romeos, while Achille Varzi won the ‘34 Gran Premio di Tripoli in an Alfa-Romeo Tipo-B P3.

In sports cars, Albert Divo won the 1928 Targa Florio in a Bugatti 35B and more recently in the US, Al Unser Jr took the ‘82 Mosport Park Can Am win driving a Frissbee Chevrolet. Also, in the US, Scott Pruett Memo Rojas’s Riley-BMW took the ’09 Hours of the Glen.

There were two world championship Acropolis Rallies in Greece on this day over the years — Carlos Sainz won driving a Toyota Celica GT-4 in 1990 and Petter Solberg took the 2004 win in a Subaru Impreza.

In two other notable moments on this day, Stirling Moss drove a Formula Junior Cooper to his first ever race win at Stanmer Park in ‘48 and Jim Clark made his F1 debut for Lotus in the 1960 Dutch Grand Prix, running as high as second before retiring. Also on this day, Bruce McLaren won on his first McLaren race car’s debut at Mosport Park, Canada in ‘64 .

Off the racetrack, the Swiss Parliament voted to lift the ban of circuit racing imposed after the 1955 Le Mans disaster in 2007 and successful race driver and engineer who founded the eponymous car brand, Swiss-born American Louis Chevrolet passed away aged 62 in 1941.