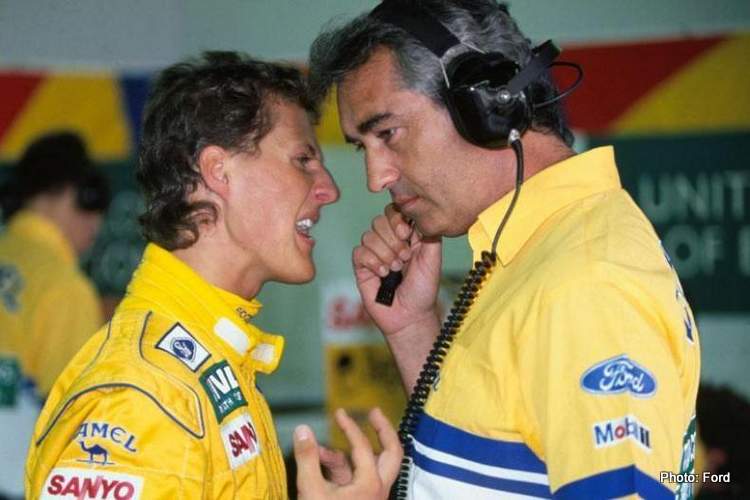 Ross Brawn has poured cold water on a couple of myths about Michael Schumacher, one of them was that Flavio Briatore ‘discovered’ the German legend when the Italian hardly knew who the upstart was until he made the headline-grabbing Formula 1 debut at the Belgian Grand Prix in 1991.

Speaking on Beyond the Grid F1 podcast Brawn revealed how he came across Schumi in his years with Tom Walkinshaw Racing, “The year we had the championship-winning Jaguar [in 1991], the only other opposition we truly had, quite frankly, was Michael in the Mercedes, because the other drivers weren’t anywhere near as good.”

“Sportscars were about going quick but also driving to fuel – driving semi-economy runs during the race. But he was doing lap times on less fuel than the others, and beating them by a mile.”

“We were saved a little bit by the fact that the Mercedes management gave each of their drivers an equal stint in the car, so Michael would go out and give us all sorts of grief and then the other two would give us some comfort.”

This destroys the long-standing perception that Karl Wendlinger and Heinz-Harald Frentzen were as quick as Schumi when they were teammates at the Sauber run Silver Arrows sportscar team of that era.

At the time Mercedes kept the lap times a closely guarded secret and deliberately kept the times set by the junior drivers murky, avoiding comparisons by sending them out with different setup configurations in an attempt to keep the data within the team.

However their rivals at Jaguar were also doing the maths on the German drivers, the fact that Brawn confirmed Mercedes had a hand in funding Schumacher’s debut closes the speculation on that matter. It also suggests they knew who was best of the trio and hence put their money on the driver from Kerpen to step up to the big time with Jordan.

In the early nineties, Brawn became aware of Schumacher during their respective sportscar careers, “That’s where I first met him, and clearly he was incredibly quick and what impressed me was his ability to do the fuel mileage with lap time. And very competitive in those days.”

Asked if he spotted potential F1 greatness in Schumacher at that time, Brawn explained, “You don’t know when you make that transition, he was exceptional in sportscars.”

“When the talk came of him coming into Formula 1, Tom and I were already engaged at Benetton and we were desperate to get him in the car because we knew how good he was.”

Brawn added how they knew before Schumacher’s ‘arrival’ at Spa that the German, 22 at the time, was special and they were keen to unload underperforming Roberto Moreno and pair the rookie with veteran Nelson Piquet.

“The problem is we had two drivers in the car [Moreno and Piquet] and Jordan had a spare seat and we were trying to convince Flavio that we should be fairly drastic in the change, but he wasn’t convinced because he knew nothing about Michael Schumacher.”

“Of course when Michael appeared in Spa, and put in the performance he did, so I think the ‘Flavio discovering Michael Schumacher’ story is a little bit exaggerated. Tom and I were desperate to get him in the car.”

“And Flavio was convinced once he saw him at Spa, so then ensued a sort of a fairly testy battle to pull him out of the Jordan and stick him in the Benetton,” which dispels the dubious myth precipitated by Briatore that he unearthed the sport’s greatest driver.

Biggest losers at the time were actually Mercedes who were prepping Schumacher along with Wendlinger (and Frentzen) for a return to Formula 1 with Sauber in 1993. In the end, with Schumacher ensconced at Benetton, they settled for Wendlinger and JJ Lehto to spearhead their return to the top flight.

Brawn recalled, “In fact, Mercedes were helping fund his Formula 1 introduction so I remember some of the Mercedes guys were involved in the discussions, but quite frankly that was something Tom and Flavio did and I watched, entertained from a distance as my role was engineering the car.”

As for Schumacher’s early impact on arriving at Benetton, he added, “He was pretty well balanced with enough confidence to make you feel he could do the job but not overconfident. Very inquisitive and very keen to learn. He came across immediately as a very professional.”