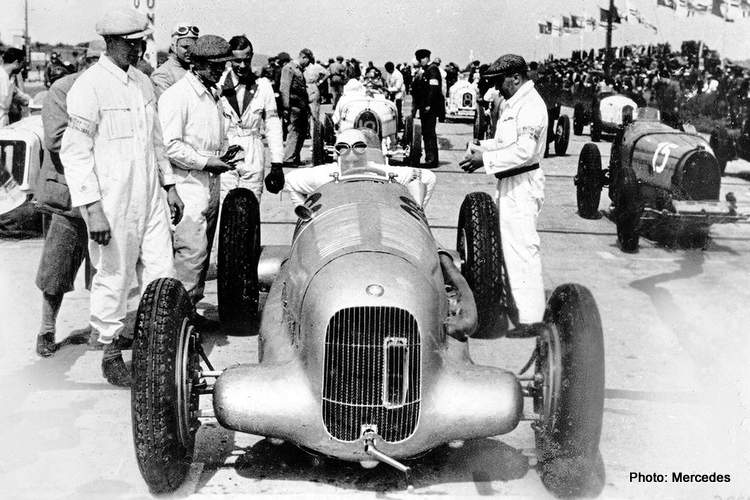 The International Eifel Race of 3 June 1934 marked both the first start and the first victory of the new Mercedes-Benz Silver Arrow with the designation W 25.

It was a debut in sparkling silver, and it ended with shining gold! The International Eifel Race, held on 3 June 1934 at the Nürburgring, was dominated by the all-new Mercedes-Benz W 25 developed from 1933 for the 750-kilogram formula introduced for 1934. With Manfred von Brauchitsch at the wheel, the victory was sealed with an average speed of 122.5 km/h – a new track record.

However, the victory was almost outshone by the revelation of the new Mercedes-Benz racing cars taking to the track with their aluminium bodies in bare silver rather than the classic racing white paint finish. According to the legend, the metallic silver skin was only exposed during the night before the race, by grinding off the white paint to bring the starting weight of the W 25 down to the limit prescribed by the race rules.

This first appearance by a Mercedes-Benz ‘Silver Arrow’ began an unrivalled series of successes achieved by the W 25 and subsequent Mercedes-Benz Silver Arrows in the years up to 1939. Mercedes-Benz followed up on these outstanding successes, initially in the 1952 season with racing sports cars and then with two Formula One World Championship titles in succession from 1954. 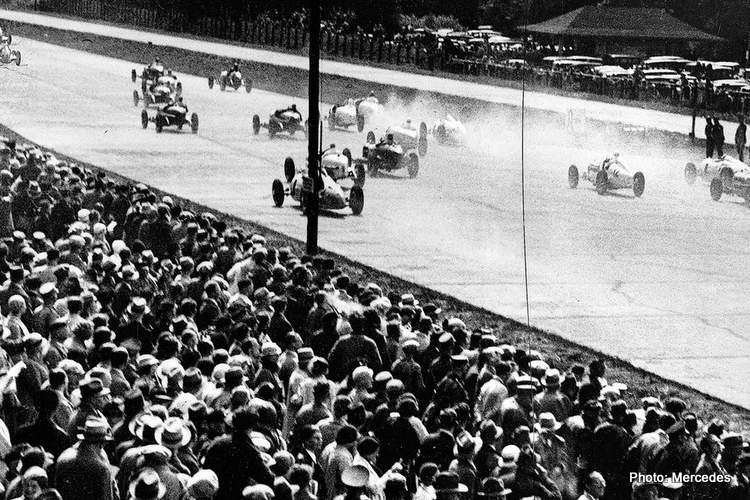 Triumph in the Eifel

The International Eifel Race at the Nürburgring was one of the greatest motor sport events of the 1934 season. In his memoirs, published in 1964, Manfred von Brauchitsch remembers the flood of spectators that made the pilgrimage to the Nürburgring: “Numerous special trains brought the crowds to the small Eifel town of Adenau.

Thousands of motorcycles, buses and trucks wound their way along the country roads to the Nürburgring. They came to the Eifel from Frankfurt, Düsseldorf, and Cologne, from the entire Ruhr region, from Munich, Hamburg, and Berlin, in excited expectation of a titanic battle between engines. 200,000 spectators lined the track. Many had already put up tents during the night at the Hatzenbach bend, the ‘Carousel’, the ‘Fox tube’, the Wehrseifen valley stretch, and at the ‘Swallow’s tail’, to secure a good vantage point.”

The start had actually been planned for 13:00, after two motorcycle races, however bad weather delayed the start for the racing cars until 15:00. Mercedes-Benz was represented by two vehicles: von Brauchitsch in car No. 20 and Fagioli at the wheel of No. 22. 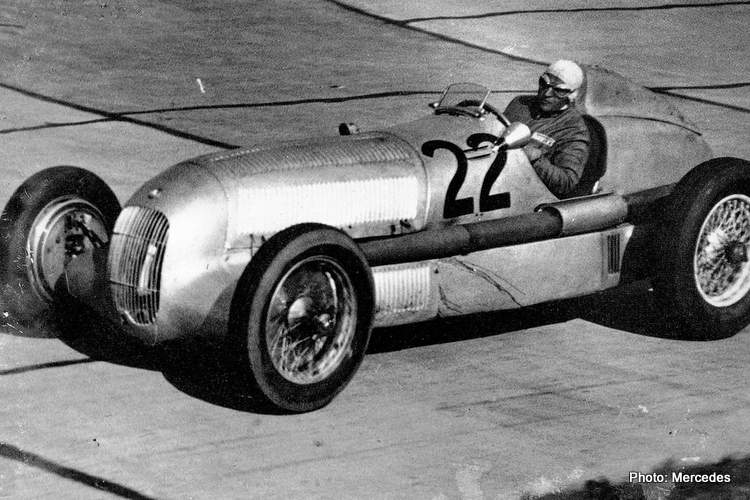 The Rise of the Silver Arrows

For Manfred von Brauchitsch, victory in the Eifel Race was the only win of 1934. The success of the W 25, which competed in Grand Prix races until 1936, was instead dominated by Rudolf Caracciola. In the 1935 season, Caracciola won a total of six Grand Prix races, with Fagioli achieving a further three victories.