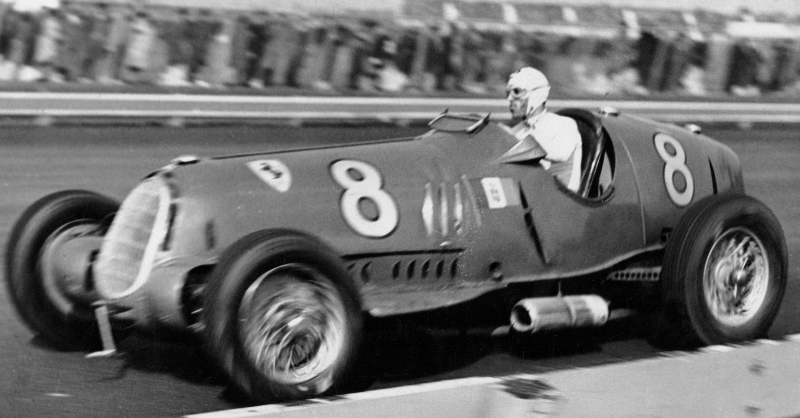 Tazio Nuvolari is famous for his victories at the limit of the impossible, fearless races, and serious accidents from which he always managed to get out alive.

Tazio Nuvolari’s agonistic life is punctuated by amazing victories, sometimes at the limit of the impossible… but also by fearless races, ended with technical inconveniences or serious accidents from which the “Flying Mantuan” had always come out miraculously alive. Succeeding, among other things, to drive in a race without a steering wheel.

One of his first accidents occurred in 1925, during a test drive for Alfa Romeo. After having flown through the first five laps, on the sixth, he disastrously ran off the track caused by totally worn out tires and a disengaged gear, he would later state. Twelve days later, despite fresh wounds and bandages, he returned to his Bianchi 350 and won the Grand Prix of Nations.

The following year, he had three more accidents, all on board of his Bianchi 350. In one of these, he went off the road because of fog and had a concussion where his life was at stake. Yet, just a few days later, he was already on his feet. His tenacity was almost out of the ordinary. In 1934, he continued to race for almost the entire season, despite one of his legs being almost totally immobilized by a bandage due to another serious accident. Although he had to retire from 9 races out of 23, at the end of the season, he triumphed in Modena and in Naples.

Another unlucky year was 1937. Not only did Nuvolari lose his first son, but during a race, his Alpha caught fire and he was able to save himself by jumping out of the cockpit while in motion. A few years later, touched by another misfortune – the loss of his second son – there were those who saw in his reckless racing a way to cling to life or, on the contrary, test his fate at the most, seeking his death on the race track.

History, however, will only award him legendary endeavours, even late in life. One was the Mille Miglia of 1948, in which Nuvolari competed at 56 years of age on a Ferrari 166 SC. During the race, the car lost a fender and, as a result of the drifts, other parts began to crack and break. Since Nuvolari did not want to stop and repair the pieces, Enzo Ferrari himself ordered him to retire from the race when he reached Reggio Emilia.

Even more well-known was the Brezzi Cup of Turin two years earlier, the famous race without a steering wheel. Nuvolari was immediately at the head of the race but, at the second lap, he zoomed by, waving the steering wheel of his Cisitalia in the air. It had come off! The driver continued driving using the stubs of the staff, until replacing the steering wheel could not be postponed. The race, menaced by malfunctions of every kind, saw Nuvolari cut the finish line in thirteenth place, with the bonnet of his car torn off. (Source: Motorweb Museum)