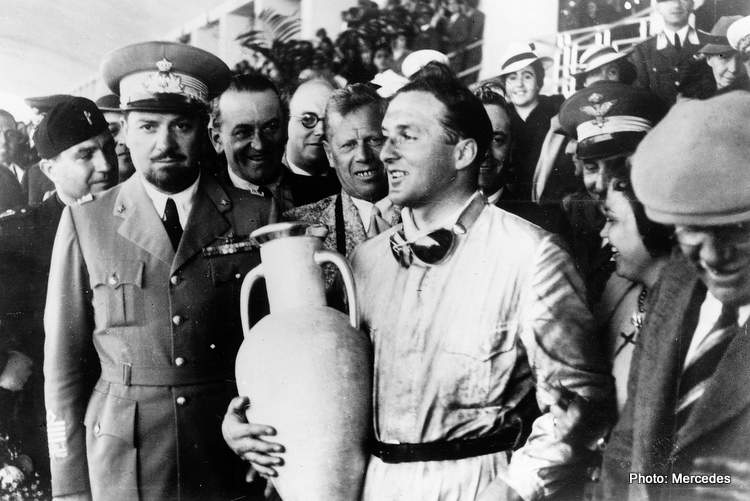 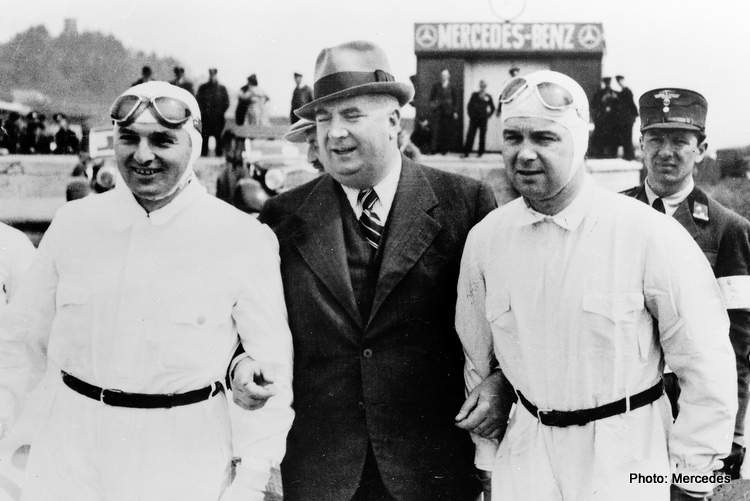 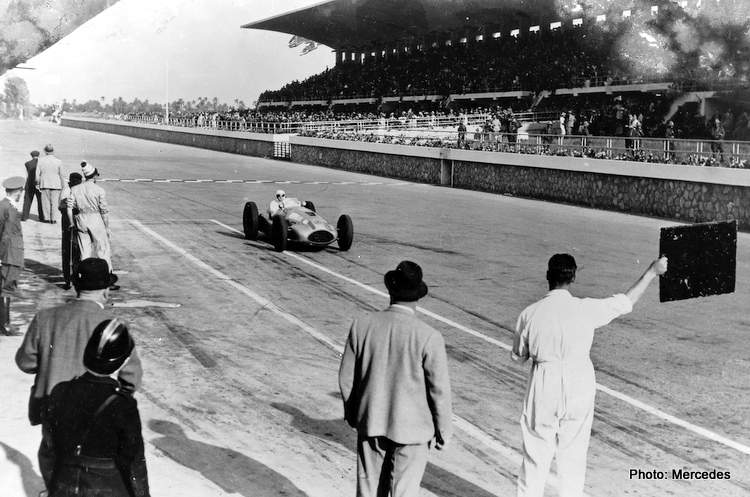 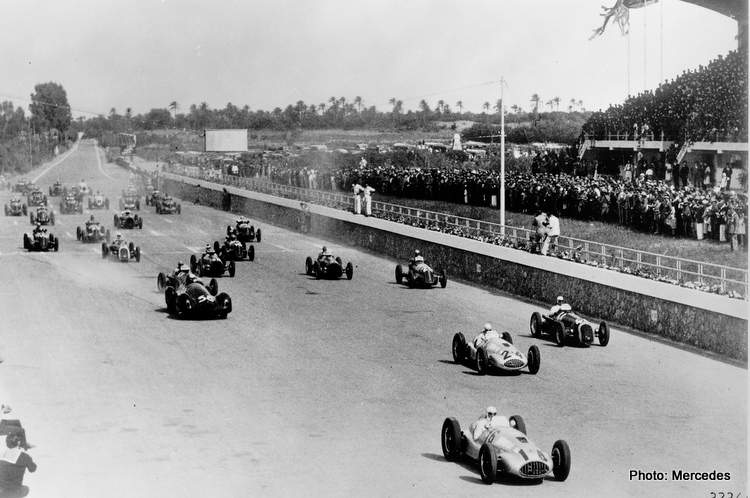 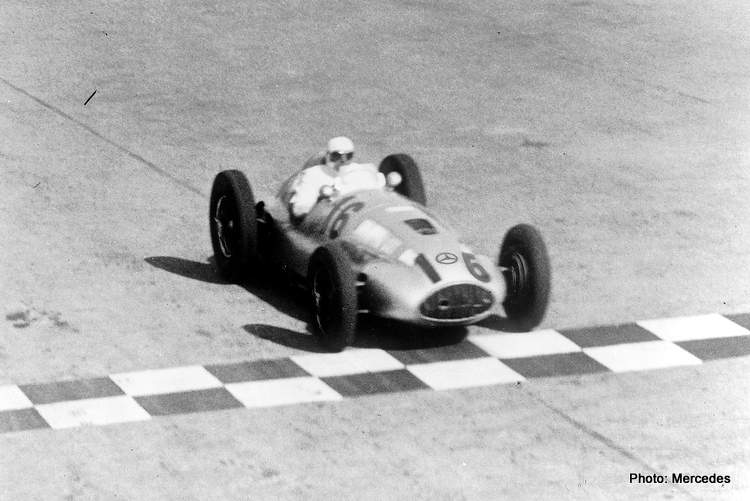 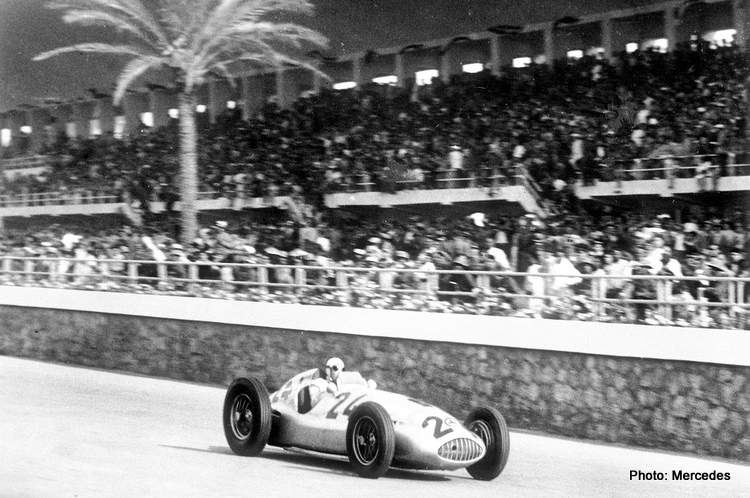 Silver Arrows drivers Hermann Lang and Rudolf Caracciola outclassed the competition with a double victory in the then completely new Mercedes-Benz W165 1.5-litre racing car at the Tripoli Grand Prix on the Mellaha circuit in 1939.

The triumph in Libya was particularly significant because the Italian motorsports association, who were organising the Grand Prix, had intended to impede the successful German formula racing cars by changing the rules.

Following three victories by the Mercedes-Benz Silver Arrows (Caracciola 1935, Lang 1937 and 1938) and a race won by the Auto Union (Achille Varzi 1936), they announced that the 1939 season Tripoli Grand Prix would be for the voiturette class of 1.5-litre racing cars only.

When he sat in the new Mercedes-Benz W165 Silver Arrow for the first time in April 1939 at the Hockenheimring, Hermann Lang was completely thrilled as he recalls in his autobiography “From racing mechanic to master driver: “Goodness me, the little athlete could go! You’d hardly got into one gear before you were switching to the next.”

The engineers of the Stuttgart brand developed the vehicle in the record time of just eight months for a single race, the 1939 season Tripoli Grand Prix (Gran Premio di Tripoli), which took place on 7 May on the Mellaha circuit.

Rudolf Caracciola, for whom Lang had become strong competition during the 1939 season, highlighted the racing and development division’s outstanding achievement in his 1958 memoirs, “My World”: “Engineers, mechanics, the entire technical staff, they all applied themselves enthusiastically to the challenge posed, and they rendered the seemingly impossible possible: within the space of eight months, they created a 1,500 cubic centimetre [powered] racing car!”

The Stuttgart brand’s announcement that two Mercedes-Benz 1.5-litre racing cars would start at the Tripoli Grand Prix came as a complete surprise to the international public – and particularly to the event organisers and other competing racing teams. Even the racing world had not considered such an achievement possible.

Hermann Lang was considered a Tripoli specialist by Mercedes-Benz: in 1937 he started the race, the debut for the newly developed W125, in 5th position and went on to win the Grand Prix ahead of Bernd Rosemeyer (Auto Union). Following the end of the 750-kilogram formula, Mercedes-Benz developed the W154 Grand Prix racing car, with a mechanically supercharged 3-litre V12 engine, for the 1938 season.

Lang started the race in pole position in this vehicle and went on to lead the Mercedes-Benz triple victory ahead of his teammates Manfred von Brauchitsch and Rudolf Caracciola.

In 1939, Lang was again on the first row of the starting grid, although Luigi Villoresi, driving a Maserati, was the fastest in training. After a perfect start, the former racing mechanic from Stuttgart in the W 165 positioned himself at the front of the field.

Halfway through the race he was already 1.5 minutes ahead of Caracciola in 2nd position, and the Mercedes-Benz racing drivers would go on to cross the finishing line in that order. Emilio Villoresi, driving an Alfa Romeo, attained third place, finishing almost 10 minutes behind the victor.

The double victory of rivals Lang and Caracciola marked the culmination of two strings of success: Lang had won the Tripoli Grand Prix three times in three different Mercedes-Benz racing cars, and Mercedes-Benz had won the race with each of the four Silver Arrows, which dominated racing in Europe from 1934-1939.

This series of successes was started by Caracciola in 1935, when he won the race in Libya, a former Italian province, in the Mercedes-Benz W 25. (Source: Mercedes Archives)