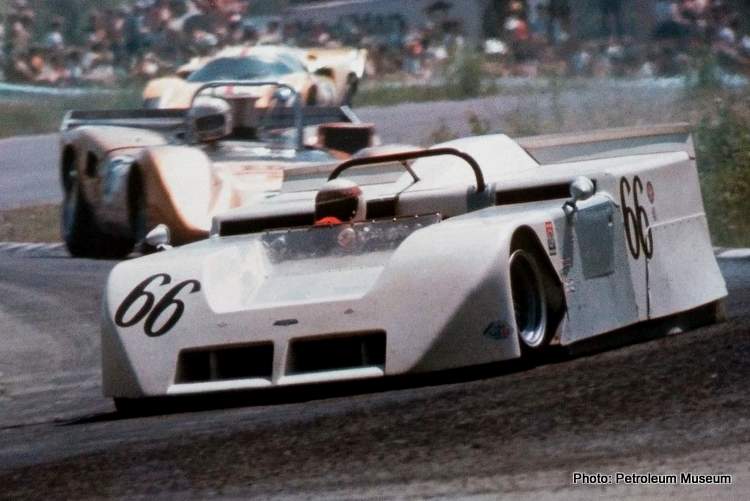 The Chaparral 2J ‘fan-car’ with the trend-setting vacuum-assisted aerodynamics made its racing debut in the Cam-Am Challenge race in Watkins Glen, New York, on 12 July1970 with Jackie Stewart on cockpit duty – he retired with a technical issue in that race.

As different as it appears, this angular, boxy car built for the 1970 Can-Am series was designed to create immense downforce independent of speed. With two 17-inch fans driven by a 2nd engine at the rear of the car, the 2J earned the nickname “sucker-car” before Gordon Murray made it famous in F1 with the “fan-car” Brabham BT46B that won one Grand Prix with Niki Lauda in 1978.

The Chaparral literally sucked the air from under the car and forced it out the back, thus creating a vacuum that provided substantially increased grip for the 2J on the track surface.

This downforce increased grip to the tires independently of the car’s forward motion and allowed the car to corner faster in both slow and high speed turns. To create a seal between the car and the road, sliding polycarbonate skirts were placed around the bottom edge of the car and maintained a constant gap to the ground.

In its first race, the 2J recorded the fastest lap at Watkins Glen, New York and then earned the pole position in all its other races. In fact, it was so fast that the FIA officials banned the 2J at the end of the 1970 Can-Am season because the sliding polycarbonate skirts were said to have violated the “movable aerodynamic device” ban; thus ending the car’s career at its Dawn of Victory.

As momentum gathered to ban the innovative car, it’s designer Jim Hall said, in October 1970, “If I can come up with a better mousetrap that is within the regulations, I ought to be allowed to use it.”