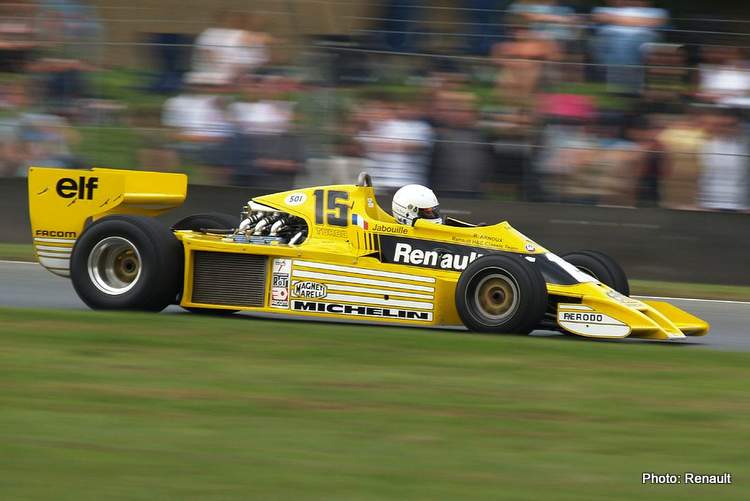 While Renault were late in coming to the sport compared to Ferrari and Mercedes, when they did in the late seventies, they made some big waves adding to the proud legacy which began when Amédée Gordini, who had created Grand Prix cars under his own name.

A new factory was founded at Viry-Châtillon, on the edge of the motorway leading from Paris to the south of France. It was inaugurated on 6 February 1969, and it was to be the launchpad for motor sporting success over the following decades.

The initial focus was on a new 2-litre V6 engine, which was officially launched in January 1973. The engine soon proved to be competitive in the prestigious European 2-litre sportscar series. That was followed by a move into the FIA World Sportscar Championship with a turbocharged version of the engine.

Renault Sport was founded in 1976, and that year saw the birth of a parallel single-seater programme with the V6 engine in European F2.

In sportscars the turbocharged Renaults proved to be incredibly fast, securing a string of poles and fastest laps, but bad luck robbed the team of good results. Everything came together in 1978 when Didier Pironi and Jean-Pierre Jaussaud scored a historic victory, with another Renault coming home fourth. With Le Mans success finally secured, Renault could now focus on its other goal – Formula 1.

The option to run a turbocharged engine had been in the rules for many years, but nobody had dared to pursue it until Renault. It had quietly begun track testing with a 1.5-litre version of the turbo engine in 1976, and a short programme of races was scheduled for the following year.

The V6 turbocharged RS01 made its debut in the 1977 British GP in the hands of Jean-Pierre Jabouille. Nicknamed the ‘Yellow Teapot,’ the car retired from its first race, but not before it had made a big impression. Four further outings at the end of the year provided more valuable experience.

‘It was a very special decision to build the turbo,’ recalls Bernard Dudot, who headed the technical programme. “We were a group of young engineers at Viry-Châtillon, all very enthusiastic but having a rare understanding of the future. We were so enthusiastic that we convinced the President of Renault, Bernard Hanon, that we should do F1.”

“It was a really crazy idea at the time. Fortunately, he was very enthusiastic as well, particularly about the benefit of ‘la compétition’ and F1.”

Jean-Pierre Jabouille gave the prototype F1 car its first run at the Michelin test track at Clermont-Ferrand on 23 March 1976. It was just the start of a long journey as the team prepared to enter the sport.

“We needed to have the right level of power to fight the atmospheric engines,” says Dudot. “But on the turbo, we had the lag of a couple of seconds, and we never knew what to expect on the different types of track.”

“The main problem was assembling the engine and packaging in the small car. It was heavy as well, and the weight balance was not ideal – that was one of our greatest problems at the start.”

Jean-Pierre Menrath, one of the young engineers working on the project at the time recalled the depth of the challenge. “The most recurrent problem we had was to do with lag. The drivers absolutely had to change their driving style.”

“And, of course, the heat dissipation of the turbo engines was the most restrictive aspect in terms of designing a fast race car. The radiators had to be bigger, which made the turbo engines more difficult to fit into single-seaters than the normally-aspirated engines.”

The debut for the RS01 was set for Silverstone. Jabouille started 21st, although retired from the race in a cloud of engine smoke. He also took part in the Dutch, Italian and US GPs, qualifying as high as 10th in Zandvoort.

The education process continued through 1978. In the first part of the year, Renault concentrated on preparations for Le Mans, which paid dividends as Didier Pironi and Jean-Pierre Jaussaud scored a memorable victory. With the target achieved, the focus now turned fully to F1.

The team missed the first two Grands Prix of the year, but thereafter Jabouille completed a full season with the RS01. He qualified an encouraging third in both Austria and Italy, and scored the marque’s first points with fourth place in the USA. It was the first points for Renault, but also the first for any turbo engine – a real landmark for the sport.

“I have to say that we took some time to achieve the right level of reliability,” says Dudot. “At first, we needed to put the suppliers at the right level of service, for example, the guys supplying the pistons, valves and so on. We needed to improve quality control. Progressively we achieved it, and over the years we were more reliable and able to challenge a lot more.”

A move to a twin-turbo set-up for the 1979 Monaco GP proved to be one of the big breakthroughs. The team had finally begun to conquer the critical problem of turbo lag, and Jabouille duly scored the marque’s historical first win on home ground in Dijon, having started from pole. Further poles followed at Hockenheim and Monza while Arnoux earned two poles and three podium finishes.

It was a watershed moment as Menrath recalls: “People started looking at us differently when we won our first race, the French Grand Prix. It was both a radical change and a revelation: suddenly, the turbo-powered cars posed a real threat. It made others realize that they had to start thinking about abandoning normally-aspirated engines and switching to turbo.”

The team ran a second car for the first time in 1980 as Rene Arnoux joined Jabouille. Again, the team covered new ground and achieved progressive success, with Jabouille earning Renault’s first pole position in South Africa with the RS01. An updated car, the RS10 ground effect car, was introduced mid-season.

Meanwhile, the engineers continued to experiment, including changes to the radiators and cooling. Progress was rapid. The team went from 520/530bhp in 1979 to over 1,000bhp in the space of five years.

When Alain Prost joined in 1981 the Renault team had developed into a regular pacesetter and a World Championship contender. Indeed Prost only just missed out on the title in 1983.

His methodology, precision and absolute sense of competition so nearly brought his first world crown and he recalls, “We saw turbo engines develop every year, but the driving style was very different.”

“You had to find the right moment to accelerate – and anticipate when the power would come through. Getting the timing right depended on a lot of factors: the type of corner, speed, grip, the type of tyres, how worn they were and how much the turbo had been used.”

“For the drivers, there were corners where you definitely had to brake a bit earlier, so you could accelerate earlier, and therefore be able to have the required power at the right moment. That’s why there could be such big gaps between the cars, as well as drivers becoming tired towards the end of the race. Your brain had to process things differently.”

Meanwhile, one-by-one other teams followed the turbo route, in effect acknowledging that Renault had got its sums right.

In 1983 the company became a supplier for the first time, joining forces with Lotus. Supply deals were also extended to the Ligier and Tyrrell teams in subsequent seasons. In Portugal 1985 Ayrton Senna scored his first-ever GP victory with Renault power, and the Brazilian proved to be one of the stars of the season.

The Renault management decided to close the works outfit at the end of 1985 and focus instead on supplying engines to other teams. Indeed in 1986, the Senna/Lotus/Renault combination proved to the fastest on the grid, as the Brazilian took eight poles – although frustration on race days meant that he scored only two wins.

In 1986 the entire field used turbo engines, and power figures were boosted to way beyond 1,000bhp, a figure even the Renault engineers could not have foreseen just a few years earlier.

‘At the end of 1986, we even had a test engine that was capable of developing up to 1,200bhp thanks to the use of new turbochargers, with a new design,’ Menrath now reveals. ‘At the outset, they were intended to be used at altitude and in the end, at sea level, they produced exceptional performances.’

However, a new challenge was on the horizon. The FIA had decided that turbos were simply now too powerful and thus had to go, and a new formula for 3.5-litre normally aspirated engines were drawn up. Turbos were to be gradually reined in and phased out over the 1987 and ’88 seasons, before being outlawed completely by 1989.

Renault’s first turbocharged Formula 1 adventure lasted for 10 memorable seasons from 1977 to 1986, but its legacy has endured for much longer and now they are back with ambitions to reclaim the glory years that have etched the marque in the sport’s history.