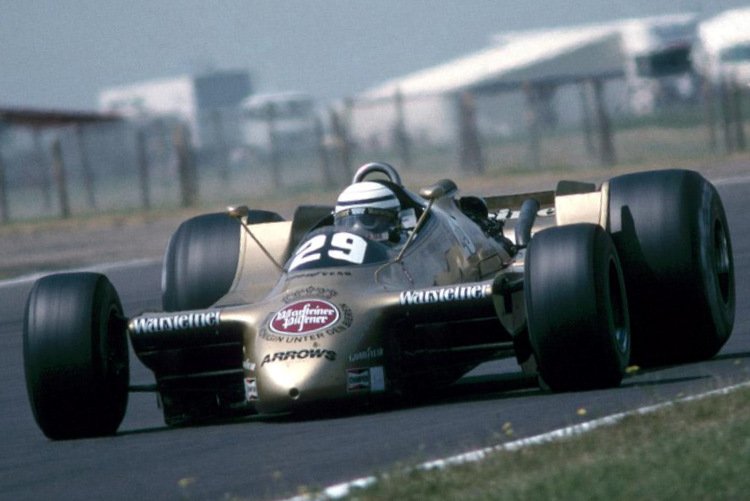 Among the long list of Formula 1 teams that are now consigned to history are many that can boast an illustrious history, with wins – and sometimes even F1 championships – to their credit, there is also one that can be considered the team that nearly did.

The one that touched the edge of greatness yet never quite got the breaks: Arrows!

A name that fans of eighties F1 will know only too well, after all they were on the grid for a quarter of a century! In fact, their trailer was at no fewer than 291 Grand Prix weekends from 1978 until 2003.

Perhaps the founders of the team, an experienced quartet consisting of Alan Rees, Jackie Oliver, Dave Wass and renowned designer Tony Southgate – plus an Italian businessman named Franco Ambrosio providing much of the finance – should have taken note of the ill-omens that came with the foundation of Arrows in 1978, for when they unveiled their very neat and tidy first chassis – the FA1 – rival team Shadow immediately sued for copyright infringement. 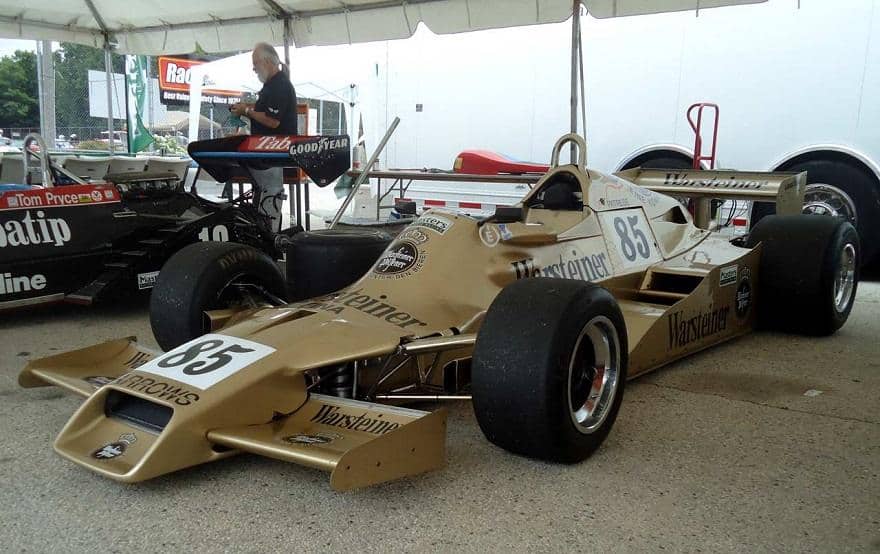 The four named founders had left Shadow the previous year to form their own team, and even the casual fan could see that the FA1 was a direct copy of the Shadow DN9, the car they had left behind.

The High Court upheld the claim, and the new team was unceremoniously banned from racing, unless they could produce a new car. This they did, in an astonishing 52 days.Notably, it was named the Arrows A1, as Ambrosio had by this time been indicted for financial irregularities and would soon be jailed. Not a great start, then, but the new team was there at the second round in Brazil, ready to flex its muscles and show that a new team could be a contender. 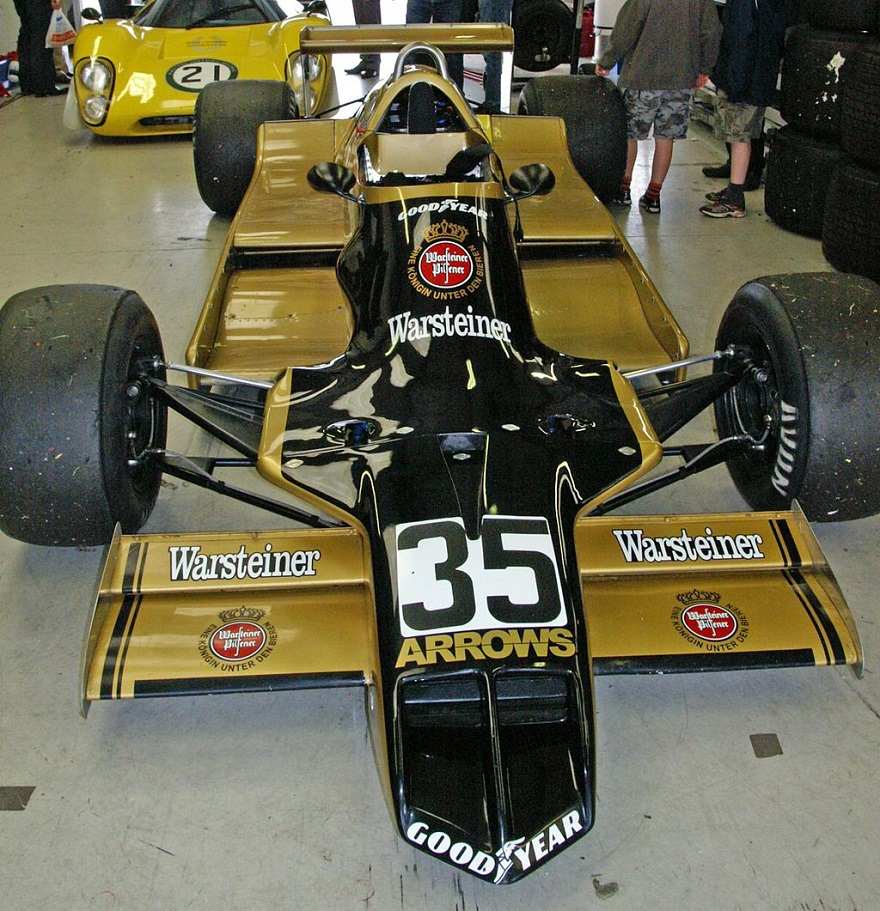 It could possibly be said that no team in the history of the sport had got off to such a problematic start.

They had signed the promising and likeable young Swede, Gunnar Nilsson, to lead the team. Tragically, Nilsson was diagnosed with testicular cancer, and never got to drive the car. He would succumb to his illness later in the year.

His replacement was the young Italian Riccardo Patrese, who was about to begin a career in the sport that began with him as the most controversial ‘wild child’ on the grid, and would close many years later with him regarded as the ultimate elder statesman and highly regarded ‘number 2’ driver. 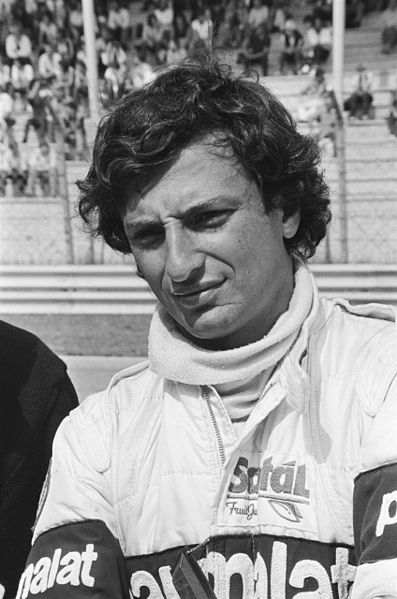 So far, then, not so good, but despite the many hurdles that had been put in their way, this gallant team of driven and determined men set about making a name for themselves. These were the days, of course, when a new team could buy an off-the-shelf Cosworth V8 and be competitive.They only had the one car ready for Brazil – where Patrese duly qualified and finished in 10th place – albeit four laps down. For the next race, in South Africa, Patrese qualified an excellent 7th, only to be let down by an engine failure.

What is often forgotten is that the engine let go when Patrese was in the lead – in only the second race for the team – and quite comfortably so. The fact that, during its entire existence, Arrows would never win a Grand Prix makes this result historically even more galling for those involved.

All in all, then, the new Arrows team had made quite an impact in a short time, and certainly raised eyebrows during the ’78 season. Patrese would score points in a number of races – among them a fine 2nd place in the Swedish Grand Prix, a race famous for the debut, and finale, of the legendary Brabham BT46B ‘fan car’ which used a loophole in the rules so advantageous, that the team-owner Bernie Ecclestone would agree to never run the car again as he knew everybody would simply copy it, and the advantage would be eroded.

Patrese had gained a reputation as something of a loose cannon among his peers, and was involved in a number of incidents where the blame was squarely laid at his door. The culmination of this was that fingers of blame were pointed at the young Italian as the cause of the start line accident that resulted in grave injuries to Ronnie Peterson at Monza in 1978.

The teams grouped together and barred Patrese from the next race at Watkins Glen. He – and the team – were incensed, as they believed (quite rightly, as is now accepted) that he in fact had nothing to do with the accident. It was an unsavoury moment that smacked of a witch-hunt, and had a profound effect on the young man at the time.

1979 saw practically every team copying the Lotus’s game-changing ‘ground-effect’ design from the previous year. Because the process involved was not yet fully understood, some teams got it right, and others got it wrong (Lotus, curiously, were one of the teams who went the wrong way). 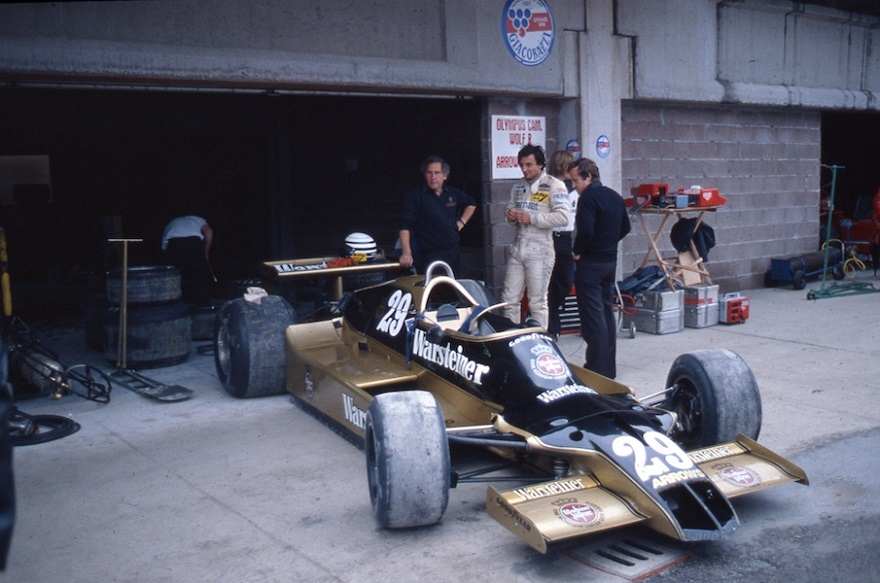 Arrows began the season with a ‘b’ version of the A1, but when the new A2 was introduced at the French Grand Prix, half-way through the season, it was clearly the most radical design F1 had seen in a long time. Low-slung, with a sharp nose and no front wings, long sidepods and a low rear wing, it really looked the part. 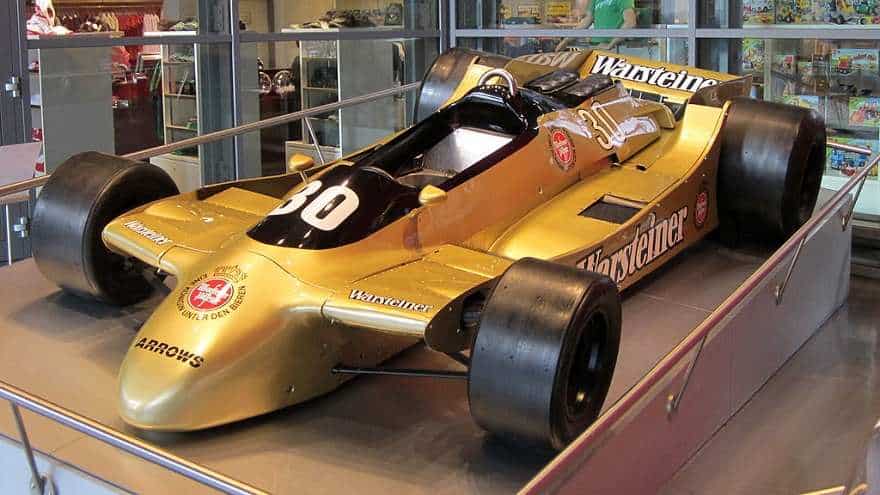 Unfortunately, it was a step too far, and was desperately unsuccessful in the hands of Patrese and new signing Jochen Mass. The problem was that it worked ‘too well’; the amount of downforce generated was simply colossal, and this meant the car handled very badly. Too much, then, of a good thing.

The A2 was replaced by the conventional A3 – essentially a copy of the Williams FW07 – for 1980, and this car would provide some fine performances. The best was a second place for Patrese at Long Beach. A revised A3 ran in 1981, and Patrese took pole position in the opening race and led until his engine began misfiring. Another potential victory for this popular team lost.

The End in Sight

Post 1981, the Arrows story is a curious mix of almost-there success and odd direction changes, including a strange link-up with a very dodgy Nigerian ‘Prince’, a brief dalliance with Tom Walkinshaw’s TWR organisation, a disastrous partnership with Porsche and another ‘nearly-win’ for none other than World Champion Damon Hill.