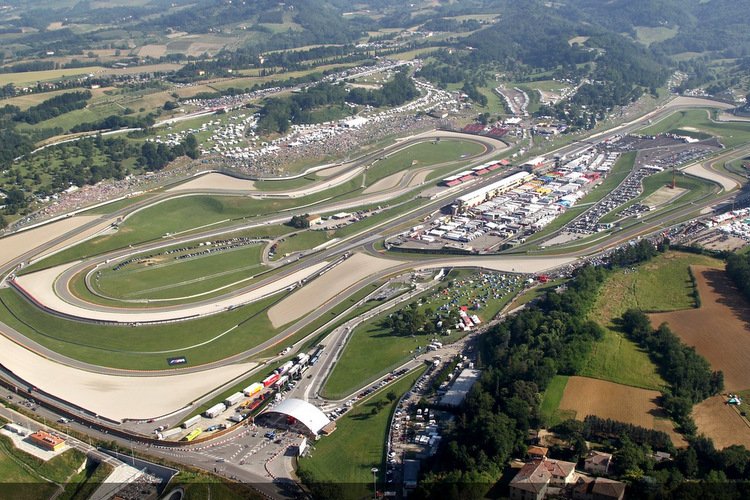 Mugello is more than a race track, it’s also an absolutely stunning location in the Tuscany hills and will be in the world spotlight, like never before, when it hosts the Gran Premio deal Tuscana on the weekend of 11-13 September.

Ferrari said of the announcement:

“For the first time in its history, the Mugello Circuit will play host to a race that counts towards the FIA Formula 1 World Championship.

“As part of a season calendar that has been shaken up following the pandemic caused by the Covid-19 virus, an opportunity has arisen to bring motorsport’s leading competition to a circuit that leads the way in terms of standards for safety and sustainability. It is also a track that is as spectacular as it is demanding for drivers and cars.

“The official name of the event pays homage to the region that will host the race and to the historic anniversary that will be celebrated that day by Scuderia Ferrari – the only team to have taken part in all of the 70 Formula 1 seasons so far. The Mugello Circuit is located just 35 kilometres from Florence, one of the world’s richest cities for history and artistic masterpieces which is visited by millions of people from all over the globe.

Now the ninth round of the 2020 season will take place at Mugello, Italy will return to hosting two Formula 1 Grands Prix for the first time since 2006.

That year the calendar featured both the traditional Italian Grand Prix at Monza and the last edition held to date of the San Marino Grand Prix, which took place at Imola’s Autodromo Enzo e Dino Ferrari. Both these races were won by Michael Schumacher, in his final season as a Scuderia Ferrari driver.

The name Mugello seems to just flow off the tongue.

An iconic venue brings to mind past battles. A circuit where legends have asserted their authority and superiority has been enforced. It is definitely worth the effort to attend a race at this famous circuit.

I took the fast train from Paris across to Milan, I think it was, and from there, a quick change to the local connection to Firenze, or Florence as this city is known in English.

The fast train was a good experience, similar to the one for the connection to Le Mans from Paris. The digital readout, from the small screen in the carriage, indicating the train’s speed hovered around 295kph.

We followed a super expressway along the way, and passing cars and all vehicles seemed effortless. Only one low slung exotic sports car actually passed us and just crawled away.

Florence is very crowded and space for anything is at a premium. I stayed at a very small private Hotel, within 20 minutes of the main train station and found this area to have all the necessary for that casual traveler. 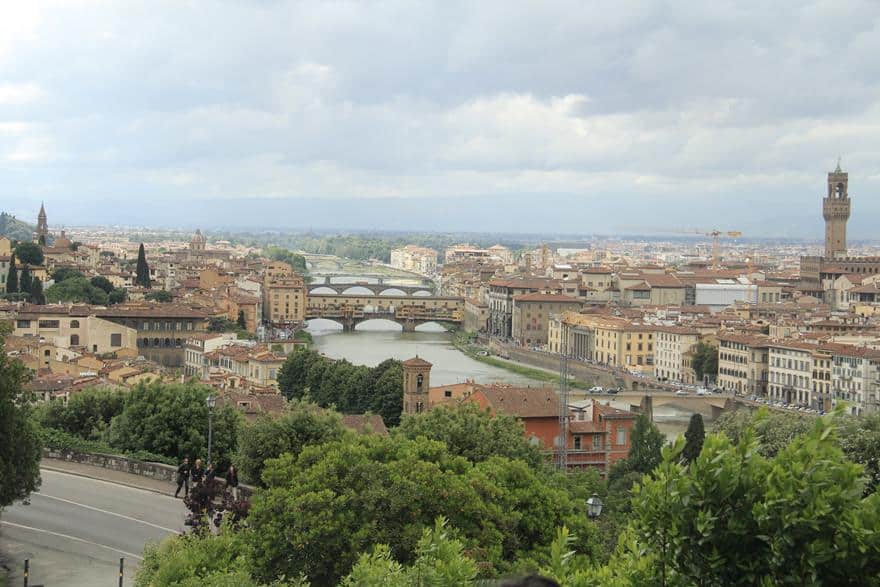 Florence is famous for leather wear apparel, and some of the more elegant and casual leather wear was of the highest quality. The range, colour and styles were amazing. There’s many markets in town, any type of food, the Hard Rock Café is very good and tourists are well catered for.

Very similar to Paris, Florence is on both sides of a river and bridges cross this river almost everywhere. I took a day tour by the open top tourist bus and enjoyed the driver’s maneuvers around the city. The bus driver would have had a competition licence for sure and was in practice mode for his next event.

To get to Mugello wasn’t easy but not horribly so.

The most important fact is this township of Borgo San Lorenzo as your destination.

The main street area of this small town has cafes and bars all decked out with varying memorabilia of past races and photos of our heroes hung proudly around the venues.

Tourism would be very important to this town during Moto GP weekends and any other event.

The ticket allocation pick up point, for those who needed to pick up previously ordered tickets, was about 30 mins or so from the train/bus station drop off point and needed a taxi for the journey.

The MotoGP website and ticket receipts supply all information as to the whereabouts of their allocation points for that specific event. Similar to Assen, there were Bus Ferry services out to the Track.

An English couple I met, travelling to and from Mugello, John and Lillian, commented that next year they would stay closer to Mugello, rather than coming up from Florence.

The circuit is excellent in its presence and presentation.

The magnificent rolling hills of Tuscany combined with the actual beauty of the area, is an attraction within itself.

Camping is very popular and by my photos, you’ll see just how close to the circuit you can spend the night and day. 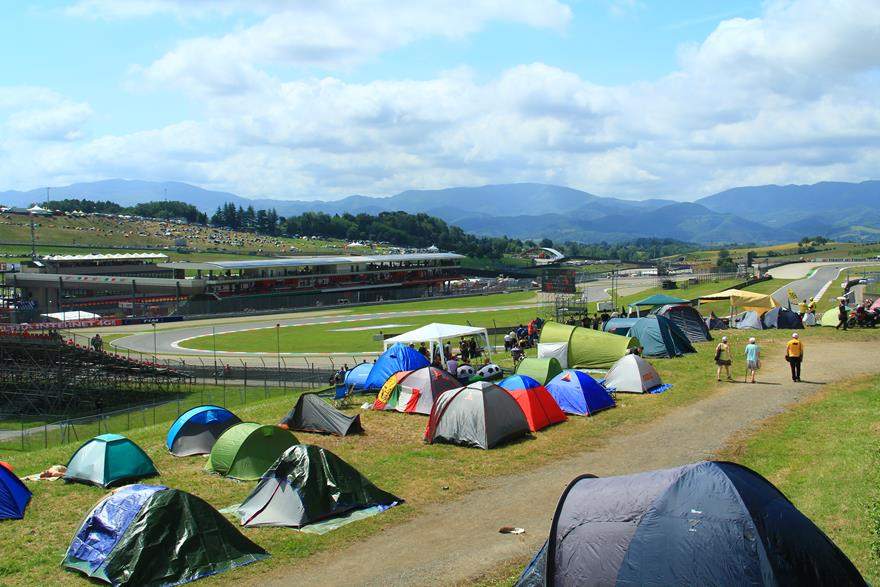 Track viewing was excellent from my side of the track and looking across to the main straight area, especially on race day, it was packed completely.

Large big screen TVs are situated for every major grandstand.

My seated position was an open stand and as usual, a good cap, sunscreen and an umbrella in case of rain, were in my day sack. 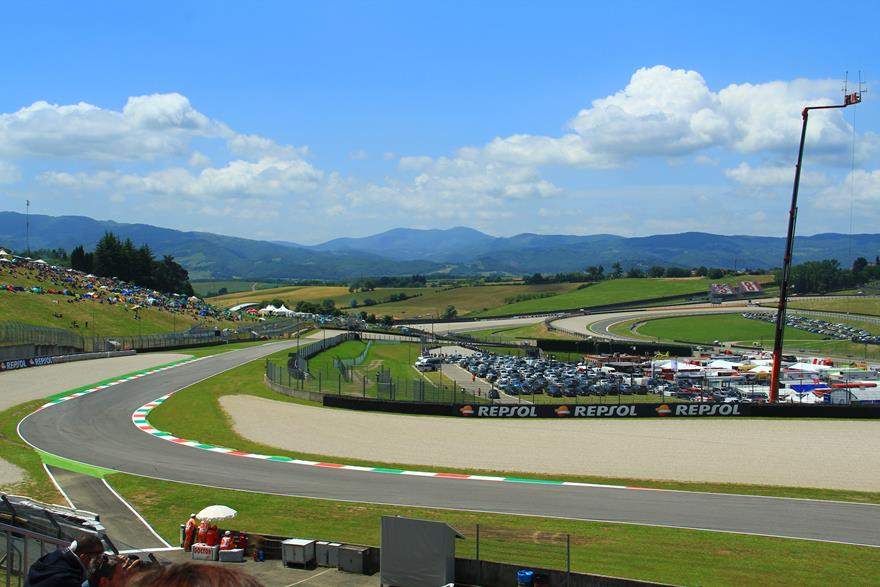 To get to my side of the track, there was a large grassy hill to be climbed. I found it far safer and easier, after the night’s light rain shower, to remove my Nikes and walk up in bare feet.

All the necessary amenities are at the track and with so many camping out to enjoy the race weekend, anything needed is there. 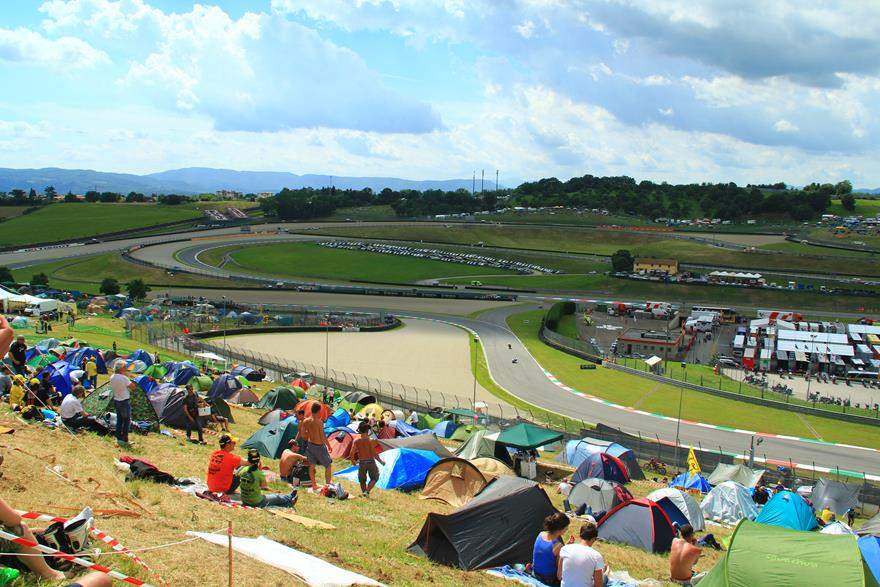 The good time vibes and party atmosphere help make Mugello a race weekend not to be missed.

They had a few major transport troubles in my year, 2013.

Marc 93 crashed that year, at the end of the main straight during practice and they say he came off at around 290k’s.

He also crashed out while leading the race on the last lap.

The main transport trouble they had, that particular year, was the bus service AFTER the last race, to ferry us all back to Borgo San Lorenzo for our connections elsewhere.

Somehow, something went amiss and believe it or not, only ONE bus turned up on my side of the track, to ferry the race spectators. It was far easier and much quicker to walk about 7 K’s or maybe a bit more to a train station and make your connection back to Florence.

I found some of the transport systems at Misano, from the race track to the bus connection service, also needed a good tune up. A major overhaul would probably be closer.

However, part of the fun is the experience.

While I enjoyed my days at the race track, there were 2 other places of interest in this area that I needed to visit.

The Ducati factory is within easy reach of Florence as were both of the Ferrari Museums. 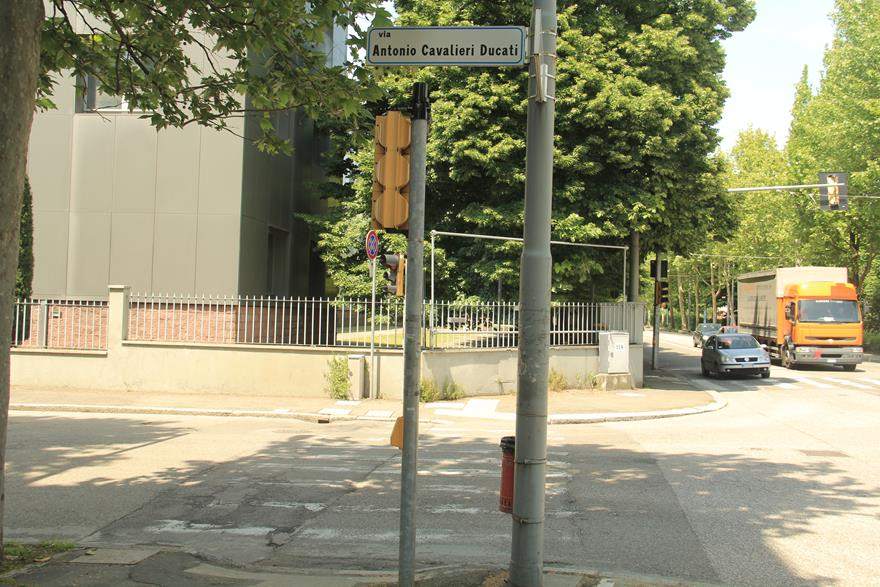 The Ducati factory is extra special and is tied so closely into the Moto GP and Superbike events, it is worthy to mention my visit.

Should you attend a meeting at Mugello, stay an extra day and enjoy what the factory has to offer. 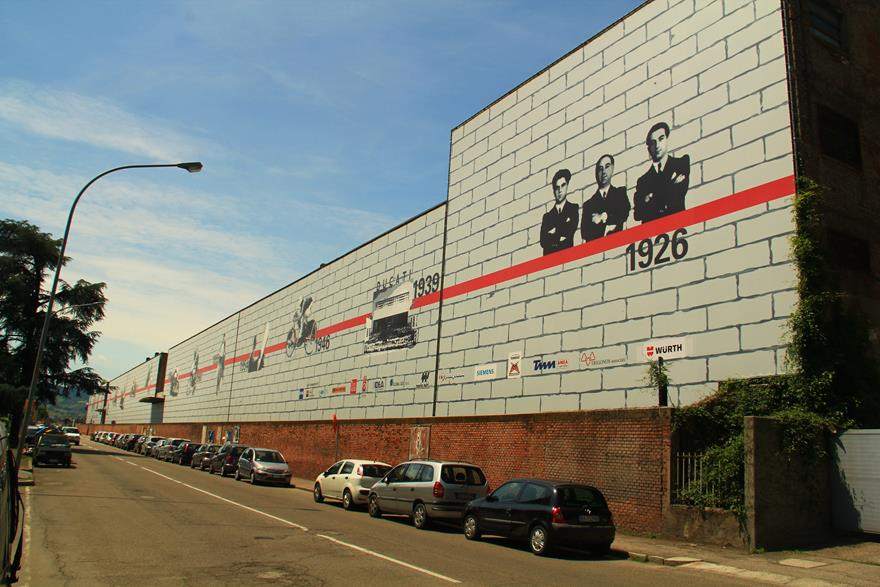 For the 10 euros, there’s a complete factory tour. My day they were assembling Multi Stradas and it is enlightening to see a pair of engine cases at one end of the production line, come out the other end as a completed bike. The guy who tested each bike on the dyno after assembly, had a smile on his work face. 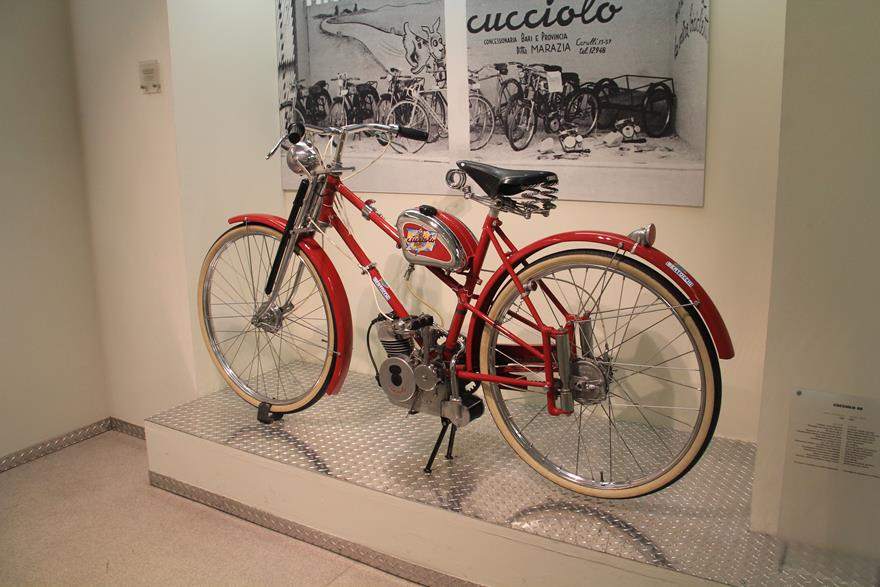 The Ferrari car museums were also part of my plan and are part of Italian history, for me. They are well presented but you don’t get to visit their assembly plant.