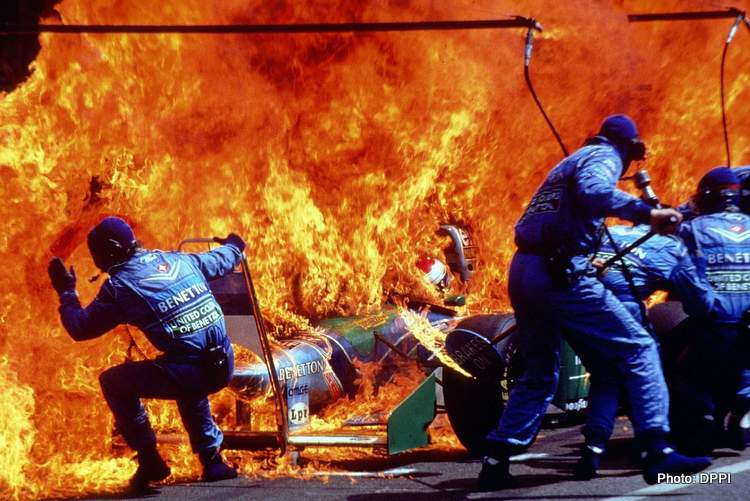 The German Grand Prix, held 26 years ago – almost to the day – was another horrid chapter in the controversial 1994 Formula 1 World Championship season.

In the days leading up to the race, on 31 July, fans heading to the Hockenheimring were shocked to learn the participation of home hero and championship leader Michael Schumacher was in doubt as he and his Benetton team’s FIA appeal was rejected.

Although the German did race, his team came away from the race weekend pointless and counting the cost of a horrendous fire during Jos Verstappen’s pit stop [thanks to the team fiddling with the fueling hose to speed up pitstops.]

And with a massive crash eliminating ten of the 26 car field on the first lap, it almost escaped notice that, when the chequered flag fell, Ferrari had ended their longest-ever victory drought.

Race day was a chance of opportunities for Schumacher’s rivals to fight back. Ferrari had their best chance yet to claim their first victory in almost four years after both 412T1’s claimed the front row of the grid due to the power and straight-line advantage of the V12 engines. And Hill, armed with Williams’ revised FW16B chassis, knew he had to capitalise on his starting advantage over his title rival.

But owing to his shock earlier in the weekend the Briton had other things on his mind during the pre-race rituals. “I followed the usual obligatory procedure of taking part in the drivers’ parade and, as I sat on the back of an open-topped car with my teammate David Coulthard, the constant firing of rockets and firecrackers in the banked grandstands, something of a tradition inside the massive arena at Hockenheim did little for my peace of mind.”

For half of the field which included Hill, the outcome of the race was already decided in the first lap. Indeed for most of them it was decided within the first few metres. The chaos was triggered just seconds after the lights went green: Andrea De Cesaris tangled with Michele Alboreto, sent the Sauber C13 left onto the grass and Alboreto’s Minardi-Ford into the pit wall and pinned against Alessandro Zanardi’s Lotus.

As the rest of the field approached the first corner Mika Hakkinen, who was almost ahead of David Coulthard on the inside, squeezed the Williams driver too far and the two collided. Hakkinen’s McLaren skidded in front of the field, and several of the Finn’s rivals were taken out as they braked to avoid him, including Heinz-Harold Frentzen, Pierluigi Martini, Mark Blundell and both Jordan’s of Eddie Irvine and Rubens Barrichello.

The decimation of the field didn’t end there. Jean Alesi’s new Ferrari 043 V12 engine blew as the remaining cars headed into the forest for the first time.

That briefly put Ukyo Katayama into second place. The Tyrrell driver had a brilliant start, squeezing past Schumacher and Hill, who were now trying to find a way past. Schumacher made it through halfway around the first lap, and Hill went down the inside as they approached the Senna Kurve. But the pair tangled and Hill dropped back with a bent steering column.

As he limped on he was overtaken by the rest of the field including Coulthard, whose front wing had been damaged in the contact with Hakkinen. Both headed for the pits, where many were surprised to see the race continue.

As Berger led Schumacher onto the main straight yellow flags were flying everywhere and several course cars were parked on and next to the track while battered machinery was still being removed.

After the race, some drivers criticised the decision not to stop the race and allow the marshals to clear the track of debris. In ordinary circumstances, the Safety Car might have been deployed, but questions remained over whether its use had contributed to the crash which had killed Ayrton Senna, and it hadn’t been used in a race since then.

It took several laps to clear the start/finish straight. During that time Hill rejoined the race a lap down. Meanwhile, Schumacher had caught Berger and was forcing defensive moves from the Ferrari, the Benetton making up for its lack of straight-line speed thanks to a tiny rear wing piece.

Schumacher was also running light on fuel, and on the 13th lap of the 45 lap race, he headed to the Benetton garage for his first pit stop of the race. He rejoined the track behind teammate Jos Verstappen, who let him by as they entered the stadium section. Two laps later the Benetton crew prepared themselves for Verstappen’s pit stop.

It was the ninth race of the season and the teams were now well used to the standard-issue refuelling rigs which had been introduced at the start of the season. But Simon Morley, the team’s sub-assembly mechanic who had taken on the job of handling the fuel hose, found he couldn’t attach the nozzle properly.

As he tried to attach it again, fuel sprayed from the end of the hose. The shock of what happened had only a few seconds to sink in until the heat of the car’s exhaust and front-right brake disc caused an explosion. A firestorm engulfed the B194, Verstappen and most of the mechanics.

Fast-thinking crewmen discharged their fire extinguishers immediately, which had been flared by up to six litres of fuel, and within seconds the worst of it was out. Some mechanics had jumped clear of the car, their uniforms ablaze, and were aided by members of other teams.

The worst injuries were to Morley and Verstappen, as burning fuel had sneaked inside their protective headgear, but the consequences could easily have been worse.

Most drivers became aware of the incident as they headed towards the grandstand section and saw a column of thick black smoke rising from the pit lane. Among them was Schumacher, who still had another stop to make, but with six members of Benetton’s pit crew receiving treatment for injuries the German’s car could not be serviced but that became irrelevant on lap 21 when his Ford V8 engine blew, and he came to a stop at his team’s devastated pit box.

This left the field down to just eight runners, and Berger took an untroubled win with the two Ligier-Renault drivers promoted to second and third places respectively. The remaining points were taken by Footwork duo of Christian Fittipaldi and Gianni Morbidelli, followed by Erik Comas’s Larrousse. His teammate Olivier Beretta and Hill were the only others still running at the end.

Berger’s win was Ferrari’s first since Alain Prost’s victory at the 1990 Spanish Grand Prix in Jerez almost four years earlier. It had been a long and painful spell for F1’s most prestigious team. This was their 104th win and put them level once again with McLaren who had overtaken them as F1’s most successful team in terms of race wins the previous year.

It was a relief for Berger too, though his last win had been more recent, at the end of 1992 in Adelaide. He had been hit hard by the loss of his fellow countryman Roland Ratzenberger and friend Senna, and after another tough day for the sport it had at least produced a popular winner in the Austrian. (Report: Michael Terminello)