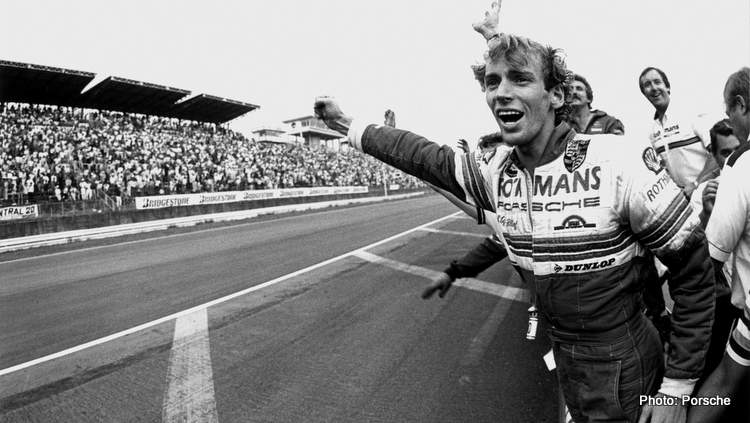 It was May 28 1983, a beautiful day at the daunting Nurburgring where the best sportscar drivers and teams were competing in the World Sportscar Championship, the 1000 km at the Nordschleife.

Practice was in full swing, with 26-year-old up-and-coming driver Stefan Bellof in the cockpit of the Porsche 956 (Chassis No.07), maximsing the conditions in practice, and blast around the legendary track, of never-ending corners, in a remarkable time of 6:11.13 – 202.073 kilometres per hour (125.562 miles per hour).

A time that on that day was nearly six seconds quicker than his veteran teammate Jochen Mass in the sister Porsche. And has, for the past 27 years, remained the benchmark lap for all time at the world’s most challenging and treacherous racing venue.

That weekend Bellof was clearly at his peak as he set the fastest lap during the race, with 6:25.91 seconds, which remains the official Nordschleife lap record for all cars.

Porsche had unearthed a diamond in the driver from Giessen who, a year later, won the 1984 World Sports Championship and was destined for big things in Formula 1 where he made his mark early on. But tragically Bellof was killed in an accident during the 1985 Spa-Francorchamps 1000 km and his true potential would never be realised.

However that iconic time of – 6:11.13 – a number that will forever be the memorial to his incredible feat, which the Nurburgring has immortalised by naming a section of the track the ‘Stefan Bellof-S’ in the German’s honour.

Drive writer Stuart Gallagher wrote of him: “Bellof’s lap time and unquestionable brilliance will never be forgotten. He was one of the greats taken all too soon, and the record books lack the championship-winning entries to match his ability behind the wheel.”

Paddock Legends have the honour of stocking the Stefan Bellof Collection online, as well as the latest Porsche leisurewear/ racewear and Nurburgring 24 Hours official merchandise.