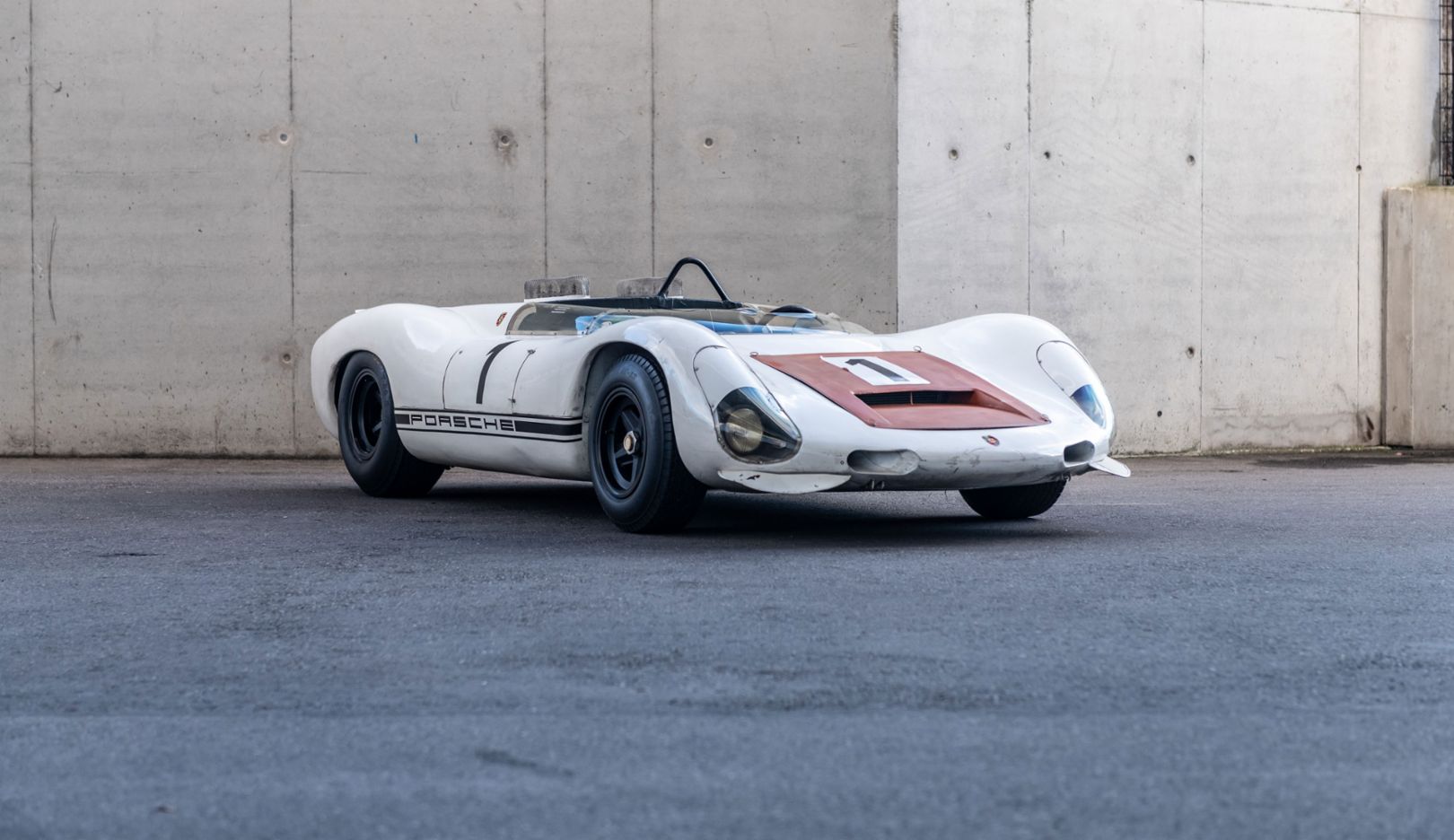 There’s not much chance of driving this 910/8 Bergspyder – one of the forefathers of Porsche’s incredible motorsport legacy – the racing car has remained unchanged for 52 years.

This will remain the case, right down to the rusted front bonnet, where now-weathered paint once shone in primary colours, scuffed seats, on which the faintest traces of flocking remain, and the toothless timing belt, stretched ineffectively across the injection pump drive – it will all be preserved for the sake of authenticity. That is just what this 910/8 Bergspyder conveys: authenticity, originality, a stopped moment in time.

“We do nothing to alter the condition,” says Alexander Klein, Head of Vehicle Management at the Porsche Museum. “Any tinkering would destroy its unique originality.”

That applies to all of its functions too: the engine must never run again, the racing car will not be driven anywhere. “We have no intention of returning it to a ready-to-drive state,” explains Alexander Klein. “The Bergspyder has fulfilled its mission – it has already proven that it can drive and win.”

Preservation instead of restoration

Preservation instead of restoration. Anything but an everyday undertaking: this is the first time that the Porsche Museum has decided to exhibit a classic car that survived its entire racing career, and has been completely unaltered ever since.

This is a rare thing, as only three racing cars of around 640 Porsche vehicles from the museum’s treasure trove have gone untouched since decommissioning.

“Attitudes towards classic cars and what to do with them have changed markedly in the past ten years,” explains Achim Stejskal, Director of the Porsche Museum. “The focus is no longer just on restoring them to their original pristine condition.”

Automotive historians are increasingly turning towards a classical approach, of maintaining cultural artefacts in their authentic condition, in line with the philosophy set out in the Charter of Turin – an international agreement that has created guidelines on the preservation and restoration of vehicles since 2012.

To put it more precisely: “Conservation includes all acts serving to secure and stabilise the vehicle or object that do not alter the historic substance, parts and materials. Conservation treatment will not put at risk the object’s historical or material documentary value in any way” it elaborates. “It serves exclusively to prevent or at least delay continued deterioration.”

Alexander Klein explains: “We’ve been considering a project like this for a very long time.” Now, the time is right, and the 910/8 Bergspyder is the ideal subject. The car last raced in 1967, after which its brake fluid, fuel, and oil were drained, the battery was removed, and ultimately the car was added to the archive.

The racing car has languished there ever since, occasionally being moved to a new spot, but never losing its original glory. The 910 031 was the favourite factory car of Gerhard Mitter, who won the then-popular European Hill Climb Championship in 1967, and to this day, the Bergspyder persists as a prime example of the synthesis between power output and lightweight construction. Still distinctively Porsche.

The racing archives note Saturday 13 May 1967 as the car’s completion date. Its eight-cylinder boxer engine with fuel injection and power output of 202 kW (275 PS) sits in front of the rear axle; the car was built with lightweight titanium, magnesium, aluminium, and plastic replacing conventional materials.

The 26-litre fuel tank contains electrum, though race engineers later switched to an aluminium tank. Without an alternator, the power for the transistor-controlled ignition was supplied by a silver-oxide battery, which also powered the horn and turn signals – in consideration of potential registration of the car for public highways.

Under the glass-fibre shell exists a steel space frame, and the chassis was designed in line with Formula 1 standards of the time, featuring extremely light 13-inch magnesium wheels for short hill sprints. Two coil springs reduce the weight on the front axle.

Trim, bonnet and floor pans were made from wafer-thin glass-fibre-reinforced plastic, while an integrated spoiler covering almost the entire width of the tail was attached with hinges and held by three perforated plates, so it could be adjusted to suit the race track; getting aerodynamics and contact pressure right can shave crucial tenths of a second off times. The 910/8 Bergspyder weighed in at less than 450 kg, and accelerated from 0-100 km/h in around three seconds.

One week after its completion, the 910 031 lined up at Montseny, Spain, for its first start, piloted by Gerhard Mitter with starting number 86. It left the rest of the international field in its dust – a first victory for the brand-new Bergspyder after just 200 km. Three more wins and further podium finishes in all eight races resulted in overall victory at the 1967 European Hill Climb Championships.

Keeping signs of ageing in check without changing the basic substance

The 910 031 was retired at the peak of its career, on 3 October 1967, after competing in the Gaisberg Race in Austria with starting number 1. The car was put into hibernation with no damage but some signs of ageing – the task now is to keep these in check as far as possible, without any changes to its basic substance.

This job requires a specialist, which is where Dr Gundula Tutt comes in: a preservationist and renowned expert on materials and paints. “She’s exactly the right person for the job,” enthuses Kuno Werner, Head of the Museum Workshop. This is where, in full view of museum visitors, Gundula Tutt inspects and preserves the Bergspyder, both inside and out – the job is neither easy nor quick.

Cleaning alone takes a full week to start with, and is a scientific undertaking in its own right. Dust and dirt need be removed to prevent corrosion underneath, though the substance of the car itself must not be compromised. And the task is quite multi-faceted, when you consider the mix of materials in this vehicle.

“We use a moist air jet and a soft brush,” the expert explains. The water evaporates quickly and none of the materials react with it. Engine and chassis, body and interior, are cleaned inch by inch.

The Porsche crest attached to the front of the car has peeled away slightly. Dr. Gundula Tutt uses heat, a steady hand, and a reversible adhesive to unobtrusively reattach the crest, in a rare moment of restoration work.

The tape that finishes the rear of the seat cover is also coming loose; this is put back in place with a little advanced, reversible adhesive. Areas of peeling paint are heated with a converted soldering iron and carefully pressed back into place on the body.

No one is more knowledgeable than this specialist restorer when it comes to the subject of old paint and finishes – her doctorate was about surface finishes of classic cars.

It included a two-year research project on repairing and restoring nitrocellulose lacquers and similar finishes based on synthetic resins, following which she was awarded a doctorate from ABK Stuttgart (Stuttgart State Academy of Art and Design). “This process, too, is caring for a cultural artefact,” says the co-author of the Charter of Turin.

Not meant to last forever

When everything is clean, the mechanical parts are treated with gun oil. A wax coating preserves the paint and plastic bodywork. Nothing on a race car from 1967 is intended to last forever. “Any substance I use can be removed again,” which is an important consideration for Gundula Tutt, because the aim today is to preserve the 910 031 in the condition it was in when it was loaded into the transporter in 1967.

“But who knows, maybe sometime in the future, someone may want to drive this car again,” she says. Maybe the urge to drive it will overwhelm that someone when they see the Bergspyder in its first appearance in 52 years at the Stuttgart Retro Classic. Museum Director Achim Stejskal promises that the car will probably be displayed in the museum one day. But not just yet. Right now the 910/8 is being preserved for posterity.