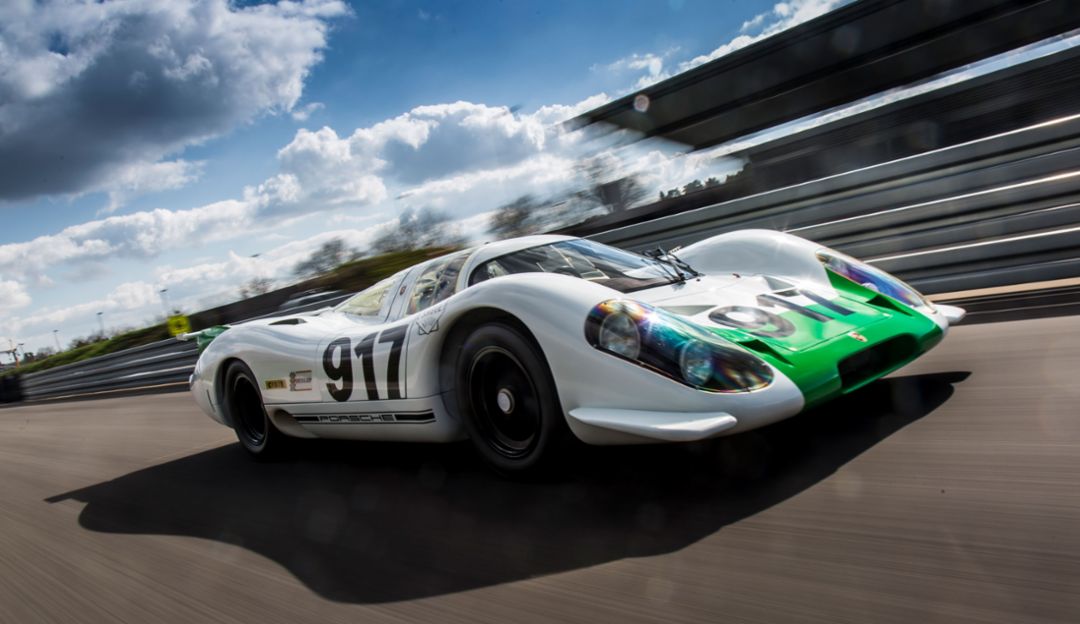 The first Porsche 917, from 1969, is being restored to its original condition using state-of-the-art technology and old-fashioned elbow grease.

On the evening of 10 March 1969, mere months after Hans Mezger’s initial ideas and design sketches, the first Porsche 917 with chassis number 001 is completed – with just two days to go before the official press event showcasing the new Porsche Group 4 sports cars at the Geneva Auto Show, scheduled for 3 p.m. on 12 March 1969.

Not long afterwards, on 21 April 1969, the 25 units necessary to meet regulations are finally completed; the 917 receives homologation certification from the official motorsport bodies, and is thereby approved for racing.

The first 917 remains a vehicle for tests and exhibitions

However, the 917-001 never competes in a race, instead serving as a test and presentation vehicle. In this role, with Rolf Stommelen behind the wheel, it completes test drives on the Nürburgring’s South Loop on 14 May 1969, before taking an endurance run on the Weissach skid pad a little later, to test the wheel bearing.

Porsche exhibits this 917 model at the German International Motor Show (IAA) in Frankfurt in September 1969, specially repainting the white vehicle with green front in an orange and white scheme for the show.

During a press conference at the London Motor Show shortly thereafter, on 30 September 1969, Porsche announces that it will no longer use its own works race team and will instead partner with J.W. Automotive Engineering, the race team of two-time Le Mans winner John Wyer.

Painted in light blue and orange – the colours of the sponsors, US oil company Gulf – the 917-001 is deployed as an exhibition vehicle again; the 917-001 in this form goes on to repeat the same role at various motor shows. Still sporting the 1969 long tail and Gulf colours, the car’s last official appearance takes place in June 1970, in a parade of old Porsche race cars in the grounds of a château near Le Mans.

In September 1970, after the long-awaited first overall win at the 24 hours of Le Mans race, the 917-001 is converted into the winning 1970s short-tail version as driven by Hans Herrmann and Richard Attwood. This version sees various modifications to the 917-001, including an altered rear frame, a new front and rear body, and modified exhaust system that extends the exhaust pipes from the front six cylinders of the V12 engine towards the back instead of the side.

Painted in the colours of Porsche Salzburg’s winning Le Mans car, and emblazoned with starting number 23, the 917-001 is handed over to the Porsche press department on 6 October and exhibited at the Paris Motor Show later that month. The car eventually becomes a permanent feature of the museum’s collection.

Restoration of the 917-001 to its original condition

In preparation for the forthcoming “50 years of the 917” anniversary event, the Porsche Museum decides in 2017 to restore the 917-001 to its original appearance as on the first outing in Geneva in 1969.

The first technical assessment is conducted in January 2018. A great deal of work is required to restore the 917-001, though the fundamentals are encouraging: although the conversion to a short-tail version involved shortening the rear, the car is still equipped with its original aluminium frame.

The modifications necessitate construction of a new rear frame, and a body with a detachable long-tail section made from fibreglass polyester laminate is manufactured. The rear-axle kinematic lever system for both rear air flaps also requires restoration for use as in 1969. The roof section with windscreen, window frames, doors and door frames is still in its original condition so does not need to be changed.

Even the twin fuel tanks are still usable, as they feature the recess necessary to accommodate the exhaust system and are still in the same condition as in 1969 (apart from the modified tank filler neck) – as is the distinctive moulding on the front of the door sills for the filler tubes.

Another feature that makes the 917-001 easily recognisable as the 1969 original is the lack of a diagonal brace in front of the pedals in the front section of the frame.

Experts from the Porsche Museum completely dismantle the 917-001 in February 2018. During disassembly, another clue is uncovered that proves just how authentic the 917-001 is: on the right sill, you can clearly see that the original recess for the 1969 exhaust system was later sealed with fibreglass laminate.

As far as possible, original materials and parts must be preserved when restoring the 917-001 to its original condition as in March 1969. That’s why the car’s assembled body frame is scanned using 3D technology.

New CAD data is calculated by reverse engineering this scanned data (surface reconstruction), which is created from the original drawings, and eventually helps cut the negative moulds to construct the new body parts with absolute precision. Because only a single piece of any body part is required at a time, the negative moulds are machined directly out of the material Ureol, saving valuable time and money. The new body parts are ultimately created from a similar polyester laminate to ensure that they are as authentic as possible.

The project makes major advances in September 2018. The reconstructed front section of the 1969 version turns out to be a precise fit, and can be attached to the frame and the remaining centre section of the body. The rear frame is adjusted while both fuel tanks are adapted to fit the inner mechanics.

Manufacturing air flaps and their mounts in accordance with original drawings

In the weeks that follow, the rear hood, attachable long-tail section (the “backpack”) and front and rear air flaps are manufactured. The original construction drawings from the Porsche Museum’s archive can be used as a reference for almost all of the parts that need to be reproduced, and this is no exception. The rear air flaps have a particularly intricate design, as is evident from their close similarities to aircraft construction: they require two parts, moulded from fibreglass-reinforced plastic, to make up the outer skin of the flap’s upper and lower surface. In the front section, an aluminium tube acts as a shaft to which two stiffening ribs and a sheet of aluminium are welded, much like an aircraft wing. At the rear, these flaps continue the kinematic element for linkage with the rear axle’s wheel knuckles, while the front remains static. This latter part is being recreated because the 917-001 featured exactly this configuration when it was exhibited at the 1969 Geneva Motor Show. Hans Mezger, Chief Engineer of the 917, is also consulted about this feature, and his conclusion could not be more positive: “It makes me very happy to see that this project is in such capable hands. I’m so impressed.”

Working against the clock – reminiscent of Geneva 1969

All of the body parts and the assembled frame are carefully sanded, smoothed out with filler and painted white in January 2019. Finally, the front of the vehicle is adorned with the green “Geneva nose”; the Porsche emblem is placed in the middle, over the air intake for the oil cooler; and the striking 917 logo is affixed in black, just as it was back then.

Only four weeks now remain to reassemble the 917-001 and restore it to roadworthy condition, complete with newly cast magnesium wheels as per the original design. Specialist mechanics are working to complete the restoration of the very first Porsche 917 on time, under almost the same time pressure as 50 years ago. Same as back in the days, the car needs to be finalized for its presentation. This time it is not Geneva, but the Retro Classics in Stuttgart.