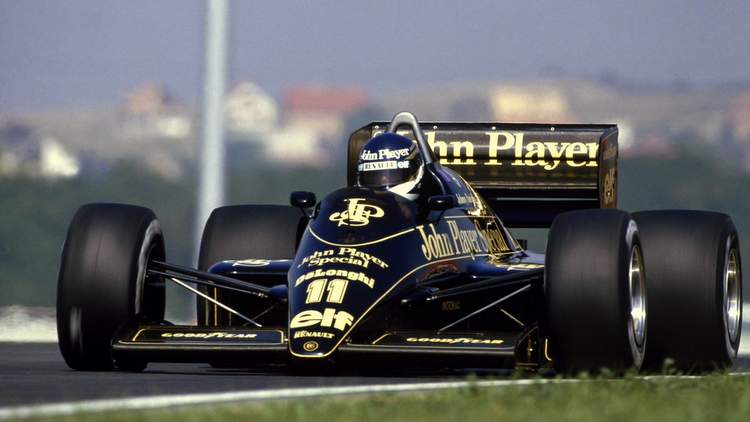 Others may, however, know Dumfries by his other name – John Colum Crichton-Stuart, 7th Marquess of Bute or perhaps the comparatively colloquial Earl of Dumfries.

For those unfamiliar with the United Kingdom’s medieval peerage and class system, a marquess is the second-highest rank of nobleman. The term is hereditary, so passed down through a family’s lineage.

John was born into Crichton-Stuart family in April 1958, one of the eldest Scottish noble families whose family tree includes the likes of King of Scotland, Robert II, while Johnny is a distant cousin to Queen Elizabeth II. Although family tradition was a five-year education at the elite Ampleforth College in Yorkshire, Dumfries, as we will hereby refer to him, would buck the trend and rather set about pursuing a career in motorsport.

Despite his substantial wealth and likely as a result of family pressure against his chosen path, Dumfries offered his services as a painter-decorator and van driver, among which his clients was Frank Williams, to gather funds to go racing. With the money he pocketed from odd-jobs, he was able to go-karting in 1980 and soon moved up to Formula Ford for 1981 and ’82, where his efforts were enough to secure a drive in Formula 3 with Dave Morgan for 1983.

Dumfries made his first dent on the main stage when he battled Ayrton Senna at Silverstone in the European series that year, an effort that garnered the attention of British Petroleum, which would back him in a 1984 Dave Price Racing British Formula 3 drive.

That proved a hugely successful season as Johnny Dumfries set the British F3 scene on fire with dominant performances week in, week out across the 17-round championship racing everywhere from to Spa, Zolder and Zandvoort to all the UK’s top circuits. Dumfries racked up ten wins to easily see him to the British title with three rounds to spare, his dominance rounded off by a 103-point title win over Allen Berg’s 67-point runner-up tally for Eddie Jordan Racing.

Dumfries used his spare time in ’84 to rack up a little more F3 experience, competing in ten of that year’s thirteen Euro series rounds, of which he won four, with two-second places to claim the runner up slot in that championship to Ivan Capelli and ahead of third-placed Gerhard Berger too.

Given the magnitude of the Scot’s F3 successes, Dumfries was taken on by Ferrari as test driver, while he also earned seats at Onyx and Lola for the ‘85 Formula 3000 season. He struggled with both those cars, scoring only a single point with the March at Vallelunga.

Today, for a driver to go from hero-to-zero in similar style as Dumfries did in his 1985 jump from F3 to F3000, one may expect a slump in his career, until the results are back on track before progressing further, as is the case right now with Mick Schumacher. That slump would however prove the key to Dumfries’ rise to the top as he unexpectedly found himself in Formula 1 alongside Ayrton Senna at Lotus for 1986.

Derek Warwick had originally been the bookies’ hot pick to partner Senna in the 98T; a partnership allegedly vetoed by Senna to instead have Dumfries in that role. They say that Senna was concerned that the team would struggle to field two competitive cars and thus damage Warwick’s reputation (never mind risk Ayrton being upstaged by Warwick…), so he suggested Johnny as a safer choice….

Despite his shock move, Dumfries, had already garnered handy F1 experience, not only in his ’85 Ferrari test driver role, but also in a Lotus 95T prize test for winning the British F3 championship in ‘84. Dumfries had also previously tested with McLaren, Brabham and Williams in 1985, but his priorities at that point remained with Ferrari.

In the hands of Ayrton Senna, the 98T proved impressive, but indeed only when reliability played along. Powered by Renault’s monstrous but thirsty and oft-temperamental turbo V6, Senna took the car to 2 wins in Spain and Detroit and also took 8 pole positions in the 16-race season, that of course with the little help of a mesmerising 1000bhp in qualifying trim.

Dumfries’ F1 career commenced at Brazil’s Jacarepaguá, where he piloted the sister Lotus to 11th in qualifying before a decent effort to ninth in the race in spite of a three-stop pitlane fiasco to sort an engine misfire. Brazil’s promise was followed by a string of five retirements, while Johnny failed to qualify at Monaco following an accident early in the session.

Bluntly put, 1986 proved another disappointing year for the Formula 1 aristocrat, who only finished five of the fifteen F1 races he started. Johnny only managed two points-paying finishes with fifth in Hungary and sixth Australia. Admittedly, many of Dumfries’ retirements can be attributed to reliability in a car that he often drove as a development test mule for Lotus’ new six-speed transmission while Senna exclusively opted for the trusty old five-speed unit.

The curtain came down on Johnny Dumfries’ Grand Prix career when Lotus swapped to Honda power at the end of 1986 and it was compelled to sign the Japanese carmaker’s official test driver Satoru Nakajima to drive the new yellow Camel-branded 99T alongside Senna in 1987. That car in that will be part of the Paddock Legends display at this week’s Retro Classic show in Stuttgart.

Dumfries then turned his attention to sportscars as he focussed on Le Mans, where his first 24-hour effort alongside Chip Ganassi and Mike Thackwell would come to an end after just 37 laps due to their Mercedes C9 suffering early transmission woes in 1987.

The following year would however prove a highlight of Johnny’s career, when he, Jan Lammers and Andy Wallace drove Jaguar Jaguar’s esteemed works Silk Cut XJR-9LM to win the 1988 24-hour. The trio completed 394 laps of the Circuit de la Sarthe, despite Lammers prolonging use of 4th gear to combat gearbox teething problems to still take the win.

Ironically, Dumfries’ 1988 win proved his only Le Mans finish as he failed to break 65 laps. In any of his other attempts and Johnny called quits on his racing career after his Courage Cougar once again expired early in the 1991 edition of Le Mans.

He indeed made another appearance when he was famously reunited with his XJR-9LM at the 2000 Goodwood Festival of Speed, but he crashed the car on his way up the hill and fortunately, the car came off less bruised than Dumfries’ pride. The Marquess later hosted the Mount Stuart Motorsport Classic at his family home on the Isle of Bute, Scotland, before the event outgrew its facilities.

Motorsport was heavily rooted as an elitist hobby in its earliest form because, well, why not? The demographic of the sport has changed vastly over the years yet those of a wealthy background continue to be rewarded by the opportunity to pay to compete.

John Crichton-Stuart may very well be ‘Racing Royalty’ but no matter what the views on his background may be, Dumfries distanced himself from his ‘gentleman driver’ peers in that he did not rely on his ample family riches.

Johnny Bute, as he is known today, instead earned his own money to go racing and he let his on-track performances do the talking to rather earn him a place at the top of the racing ladder through pure driving talent and grit.

No, Dumfries’ Formula 1 performance was nothing to write home about in the end, but he certainly earned his drive through exceptional performances in the junior formulae, which very much earned the Earl his place in a Lotus team heavily influenced by Ayrton Senna’s wan.

What could have been…