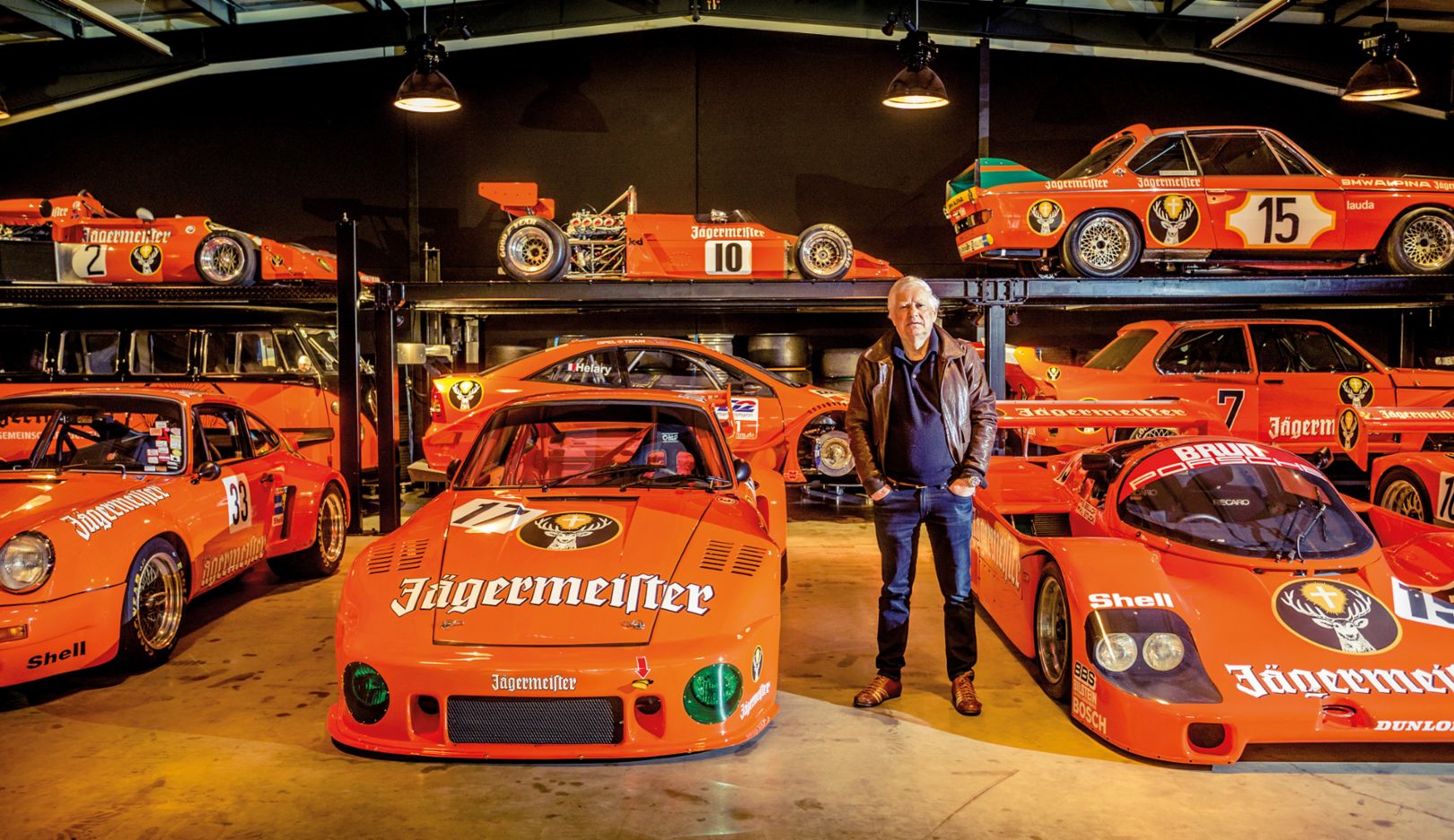 Eckhard Schimpf’s car collection is something of journey through time. It not only features the vehicles he has raced but a number of cars bearing the orange livery he helped to make famous.

Every collection tells its own story – and no two are the same. Rarely will you find a collector who can say that the items they have assembled over the years have been fully planned in advance.

For Eckhard Schimpf – the man behind the now legendary Jägermeister racing cars – his obsession with Porsche began at an early age. Although he has also owned and owns other cars, the creations from Zuffenhausen still form the nucleus of his collection.

Another rarity, is discovering that the thing that first sparked a collector’s desire still exists. For Schimpf it was a 914/6. But his is no ordinary 914/6, of course: it is the car he purchased from the Reutlingen car dealership Max Moritz in 1972 – and that he raced for two years.

It wasn’t the first Porsche to catch his eye, however: “I had seen the first Porsche 356 back in 1951 at the Prinzenpark Race, then Kurt Ahrens Sr drove his white 550 Spyder through Braunschweig. And when I accompanied Bobby Wittmann – he also drove the Nürburgring 1,000 km – as a co-driver in two reliability tests in his 1500 Super, Porsche fever had definitely struck,” he explains.

Up to that point, his had been an interesting, though not unusual career. However, in January 1971, it took an unexpected turn: “I wanted to drive in the Monte Carlo Rally, and Porsche had brought the 914/6 onto the market, which I liked on account of its mid-engine design and compact dimensions. So, in 1970 I bought myself a 914/6 and drove it in several rallies, slalom events and races.

I decided to compete with the practically standard 914/6 in the Monte Carlo Rally in January 1971 – which ended with a crash in the Maritime Alps. A year later I started once again in Frankfurt and ended the rally in a roadside ditch in the Maritime Alps – the mid-mounted engine and snow were a dangerous combination”.

In order to finance his participation in the rally, Schimpf reached out to his cousin Günter Mast – the CEO of Jägermeister – and asked him for a 500 mark contribution towards his adventure. “In return, the Jägermeister lettering was to be applied to the car,” says Schimpf. Günter replied: “500 marks is such a measly sum. You’ll get 1,000. And when you’re back from Monte Carlo, get in touch”.

This conversation launched the Jägermeister Racing Team, which would go on to finance many top-class racing cars and drivers over the coming decades. To this day, the orange racing cars with their stag logo remain among the most popular in the world.

While Schimpf moved over to racing cars built by a brand from Munich, the Jägermeister team remained faithful to Porsche: various 934 and 935 cars were used by Max Moritz and later by the Kremer team – then came the racers, the 956 and 962, which were driven by professionals including Keke Rosberg, Jan Lammers, Hans-Joachim Stuck, Gerhard Berger, Thierry Boutsen, Roland Ratzenberger and Oscar Larrauri.

All of these cars, in addition to hundreds of Porsche posters and magazines – not to mention thousands of photographs – today make up Schimpf’s collection, together with walls full of books, laurel wreaths, trophies and crash helmets.