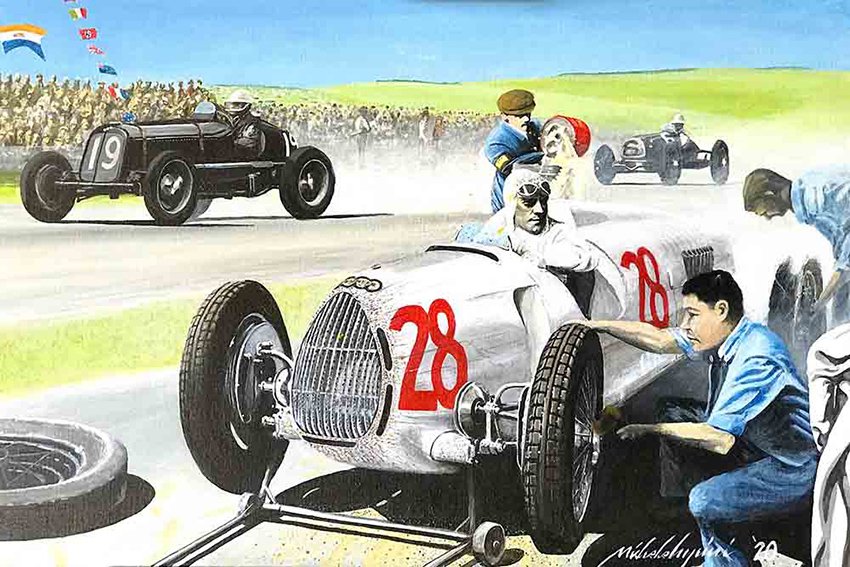 Following two years of pioneering South African Grands Prix late in 1934 and early in 1936, East London’s staggering success as a motor racing hub saw that country hosting three internationals that attracted the cream of the racing crop to commence the 1937 Grand Prix season.

Motor sport in South Africa had quickly risen from a rudimentary dirt track activity to a fully-fledged international spectacle under the spell of the swashbuckling American Brud Bishop. The Daily Dispatch motoring editor had been looking for ways to fill his pages, when the sleepy town opened a tarred 15-mile pleasure drive for visitors down the coast and back a little inland.

Bishop was quick to realise the potential of the new road as a racetrack and against all odds, organised the first two South African Grands Prix, won by Whitney Straight’s Maserati late in ’34 and local hero Mario Massacurrati, who defeated the visiting French legend’s more modern car with his Bugatti early in 1936.

The success of those races made rival Union centres sit up and take notice. In fact, the huge crowds attracted by the Grand Prix had shown it to be a form of sport that could hardly be overlooked and in 1937, the three-race Springbok Series saw light of day, stating with the South African grand Prix on New Year’s Day. This is how it happened, direct from Brud Bishop’s memoirs…

“Early in 1936, an announcement was made from Cape Town that Mr. A.O. Edward’s organisation intended on building a paved track at Pollsmoor, an historic farm site at the foot of the Steenberg mountains. Work was started on a most ambitious undertaking. A circuit of 4 and five eighths miles long, 31 feet wide, was designed by Mr. Dave McKnight, the well-known Cape roads engineer and huge grandstands and ramps were built for spectators. It is reported that £70 000 was spent on the Grosvenor Grand Prix track. Everything was done on a huge scale.

“Later in 1936, my friend James Clarke of Johannesburg, who had competed in both races at East London and had seen the tremendous crowds attracted, persuaded business associates to put up capital for a motor racing company on the Rand.

I was seduced from my newspaper job at East London to take charge of the Johannesburg company and we built the Lord Howe circuit of 2.4 miles adjoining the Pretoria road, eleven miles from Johannesburg. My company also aimed high and our grounds and buildings cost £40 000.

Thus, the scene had changed with a vengeance. Instead of a country offering one Grand Prix race run over public roads, South Africa, at one stroke, became the home of three international events with a total prize list of more than £4 000.

“The highlight of the 1937 races was the appearance of the Auto Unions. The fastest and most fantastic looking road racing machines ever built. These cars were of the highest flight of Grand Prix machines and it was almost too much to hope that we would see them perform out here. Fortunately, Baron von Oertzen, a man of vision was resident-director in Johannesburg for the Auto Union organisation at that time. I was soon able to make him see the publicity value of bringing these wonderful cars.

“South Africans assembled for this series were: Mario Massacurrati in his Maserati, Lionel Meyer and M.E. Bothner’s Bugatts, H.F. Hooper in a Talbot and and Alfa Romeo for W.H. Roderick. There were Rileys in the hands of Tom Scheckter, Frank Chiappini and J.T. Clarke, while MGs were entered for Les Miller, Roy Hesketh, E.R. Nesbit and D.R. Woodhead and H.F. Wiggill and J.H. Case were in their Ford Specials. 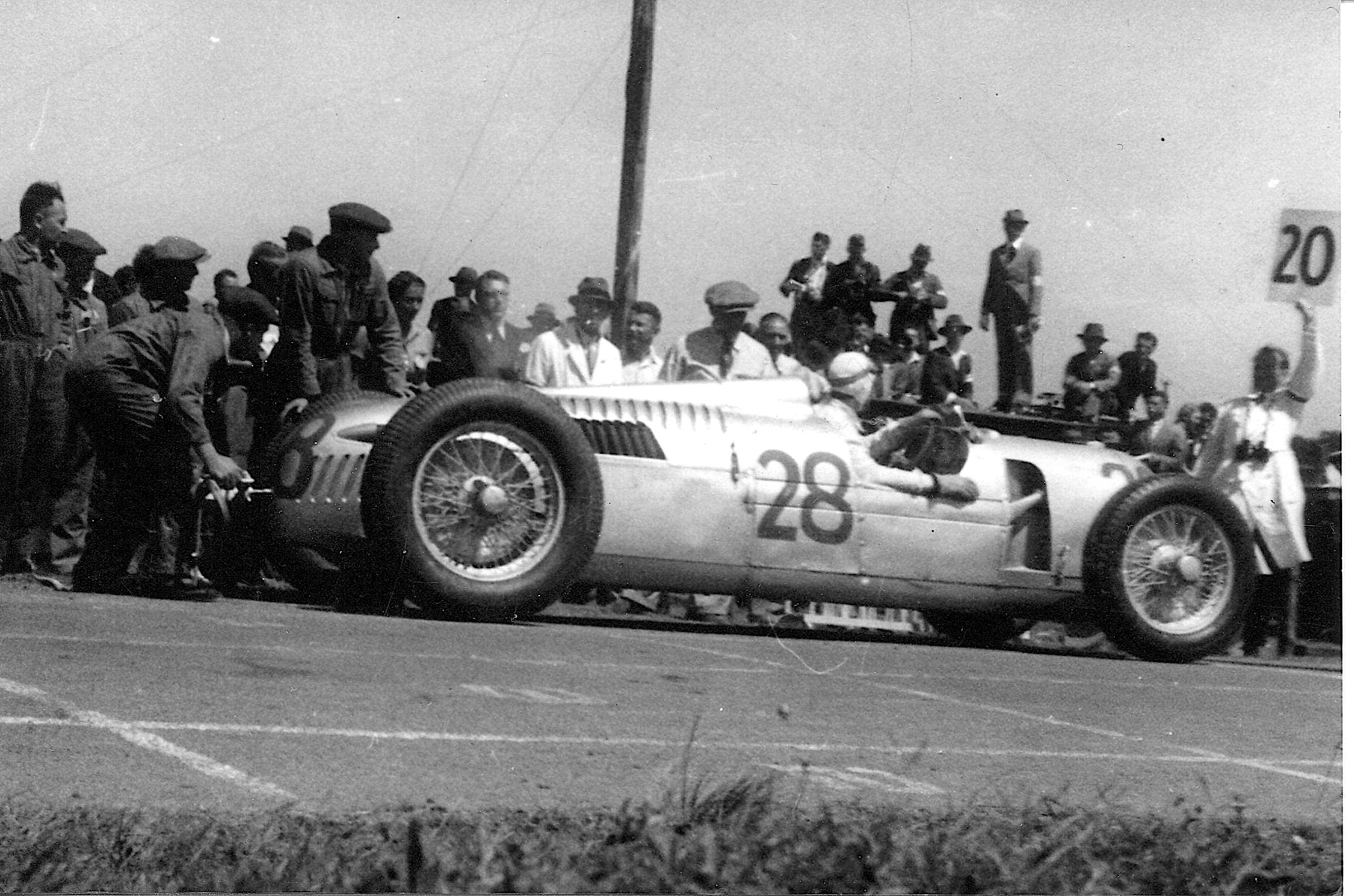 Rosemeyer fires up the Auto Union

“But one has to hand it to the Germans for showmanship. When all these competitors gathered at East London for the third S.A. Grand Prix, ‘Auto Union’ was on everyone’s lips from the first day of practise.

“The brilliant Rosemeyer was lapping at 105 mph as soon as he had tried the Prince George Circuit. Those German Grand Prix cars were the most remarkable examples of engineering I have ever seen. Built, regardless of cost, as propaganda cars, they were powered by 16-cylinder engines (two banks of eight) housed behind the driver in the machine’s streamlined tail.

“Developing 580 brake horsepower, these cars weighed no more than an 8 h.p. ‘Baby’ sedan! Suspension was independent, by torsion bar, both front and rear. The driver sat in a cockpit, only a foot behind the front wheels.

“Such a position needed a particular technique in driving these juggernauts at the phenomenal speeds of which they were capable. The driver sat so snugly in the Auto Union cockpit that the steering wheel had to be detached before he could enter and clipped on again when he was seated.

“To see Rosemeyer snaking down the three-mile-long Orange Grove straight of the East London track, with the independently sprung wheels flapping and smoke spirting from the 16 exhaust pipes like a pre-historic dragon, was a sight for the gods. The greatest combination of car and man we had seen.

“The Auto Union pit team were a show in itself, drilled like soldiers. I timed them to change all four wheels and refuel one of their cars in 38 seconds! Their record for such a feat is 31 seconds!

“The next entry to draw the most attention was Richard Seaman in his 10 years old Delage. This amazing supercharged chassis had been re-built and was the most successful 1500 c.c. racing car of 1936 in Europe. Seaman was now the leading driver in that category and his driving was a joy to watch.

“This big British boy is so neat and unobtrusive on corners, going around as if on rails, that he does not appear to be doing much – until you see his lap times. That year Seaman took the old Delage around the Prince George Circuit at an average of 104. That it was not until 1939 that a modern “1500” touched that figure again. 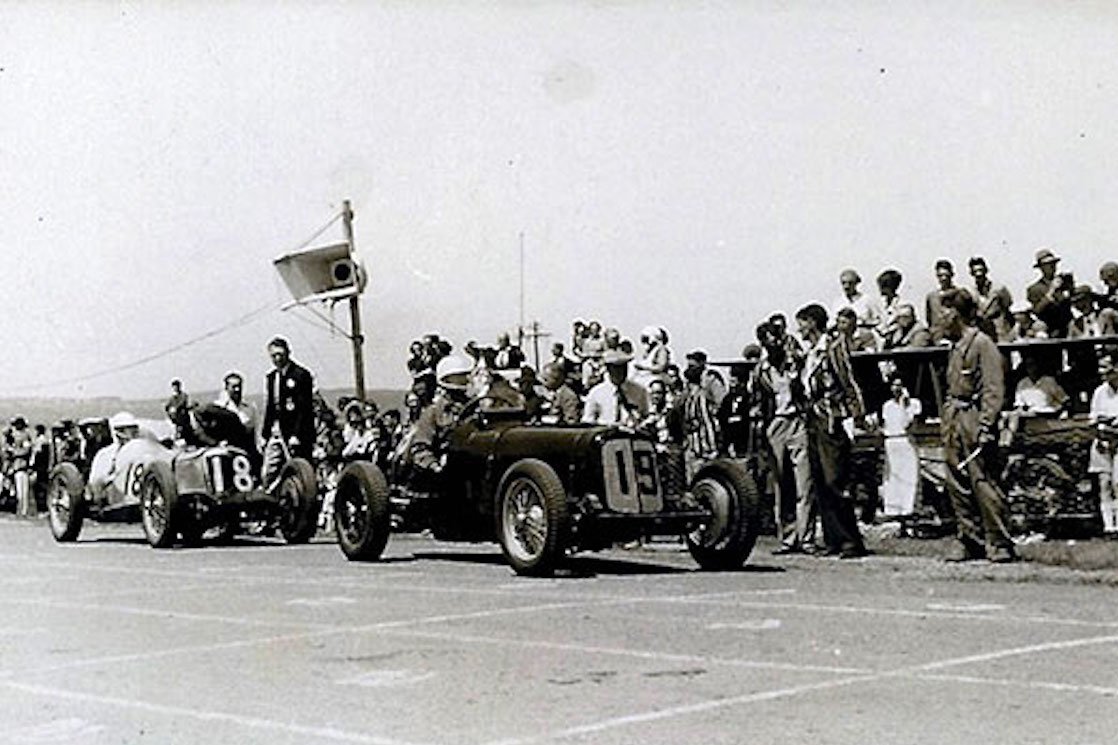 Pat Fairfield impressed in his ERA

“Once more, Pat Fairfield compelled attention. Third the year before, his 1100 c.c. ERA had a new engine, and he was driving better than ever. On handicap he was set an average of 86 In practise he had several laps at nearly 90. Baron von Oertzen, in charge of the Auto Union team shook his head and said, before the race, that his rear engine monsters would never catch Fairfield or Seaman. Auto Unions were set to average 108 for the 200 miles!

“And so, it proved. Fairfield was too good for the handicapper on this occasion and brought his 1100 c.c. car in at the wonderful average of 89 – three miles an hour better than his set figure. South Africans did well this time by coming in second and third: these being Buller Meyer and Chiappini, both in Rileys.

“Revsch, the Swiss driver, brought his roaring scarlet Alfa Romeo into fourth place. With a breathless last burst of speed, Rosemeyer claimed fifth place after averaging 108.56 for the race – a stupendous performance, after three pit stops for tyres and making at least 150 passing movements.

Rosemeyer and von Delius however had to deal with tyre issues – Auto Union in fact retired the latter to ensure that Rosemeyer could make the finish after several stops to change hios rubber, one indeed after suffering a blow-out at 200 mph as he rounded Potters Pass. Somehow he controlled the car and dived into the pits for service. 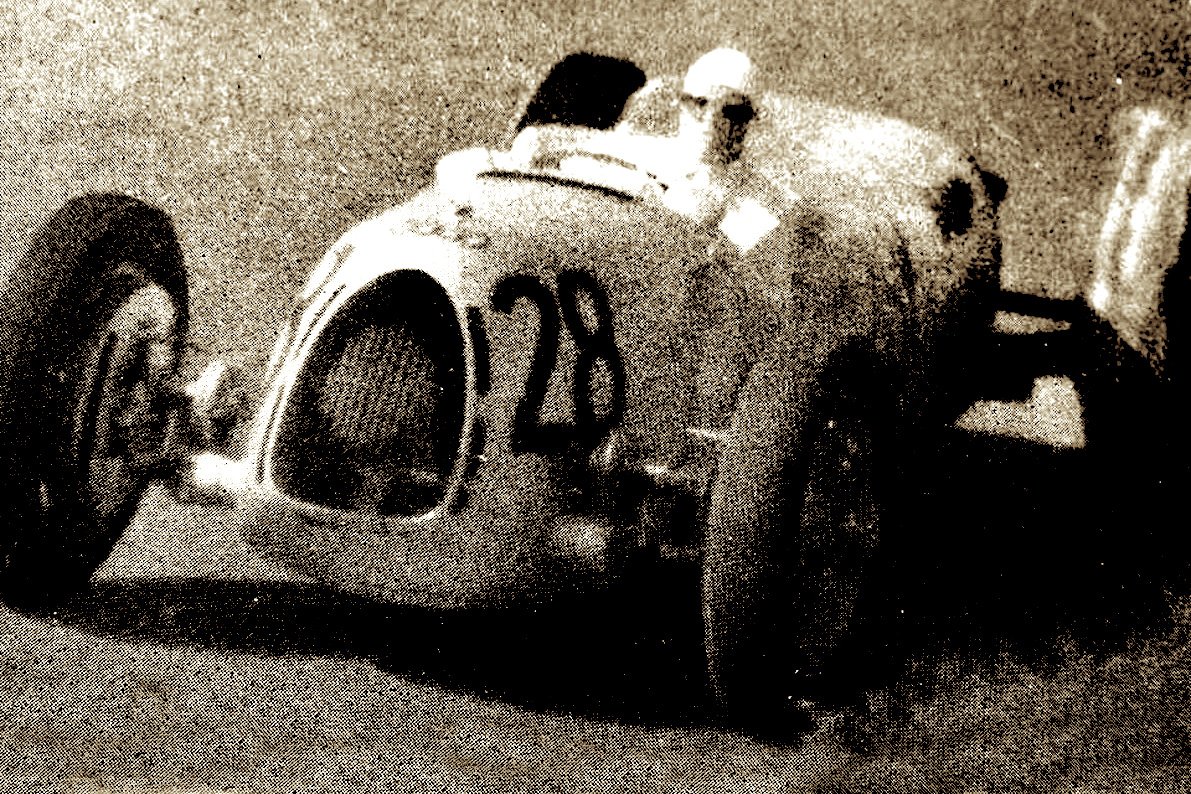 Rosemeyer suffers a blowout at over 300 km/h

‘Mario’ the volatile Italian driver domiciled in South Africa, winning the second South African Grand Prix on January 01, 1936, in a 2.3 Bugatti at an average speed of 87 miles per hour. He won by a minute from J.P. Wimille, the French ace, who averaged 94.

“The eyes of South African motor racing enthusiasts were now turned on Cape Town, which centre was feverishly preparing to present the first Grand Prix race over the Polls moor track on January 16th.

“Practically the same field of drivers was engaged for the first Grosvenor Grand Prix. The rumour ran at first that Auto Union had had enough and were going home. After all, one could not blame the Germans for feeling disappointed. The East London race had been the first time that their propaganda cars had ever been risked in a handicap event. They had exceeded their required average and yet had been able to do no better than fifth place.

“But the practises for the Cape race showed that the Germans were getting nearer to their set average than any of the other competitors and they ended up red hot favourites for the race.

“In a blinding sandstorm the big Auto Union cars had it all their own way in the first Grosvenor Grand Prix. Von Delius took the lead from Lord Howe five laps from the finish. Rosemeyer came into second place on the penultimate lap. Lord Howe in his 1500 c.c. E.R.A. was the strongest challenger to the Germans. Up to a late stage it looked as though he might hold them but a pitstop for plugs to-wards the end lost him his advantage. 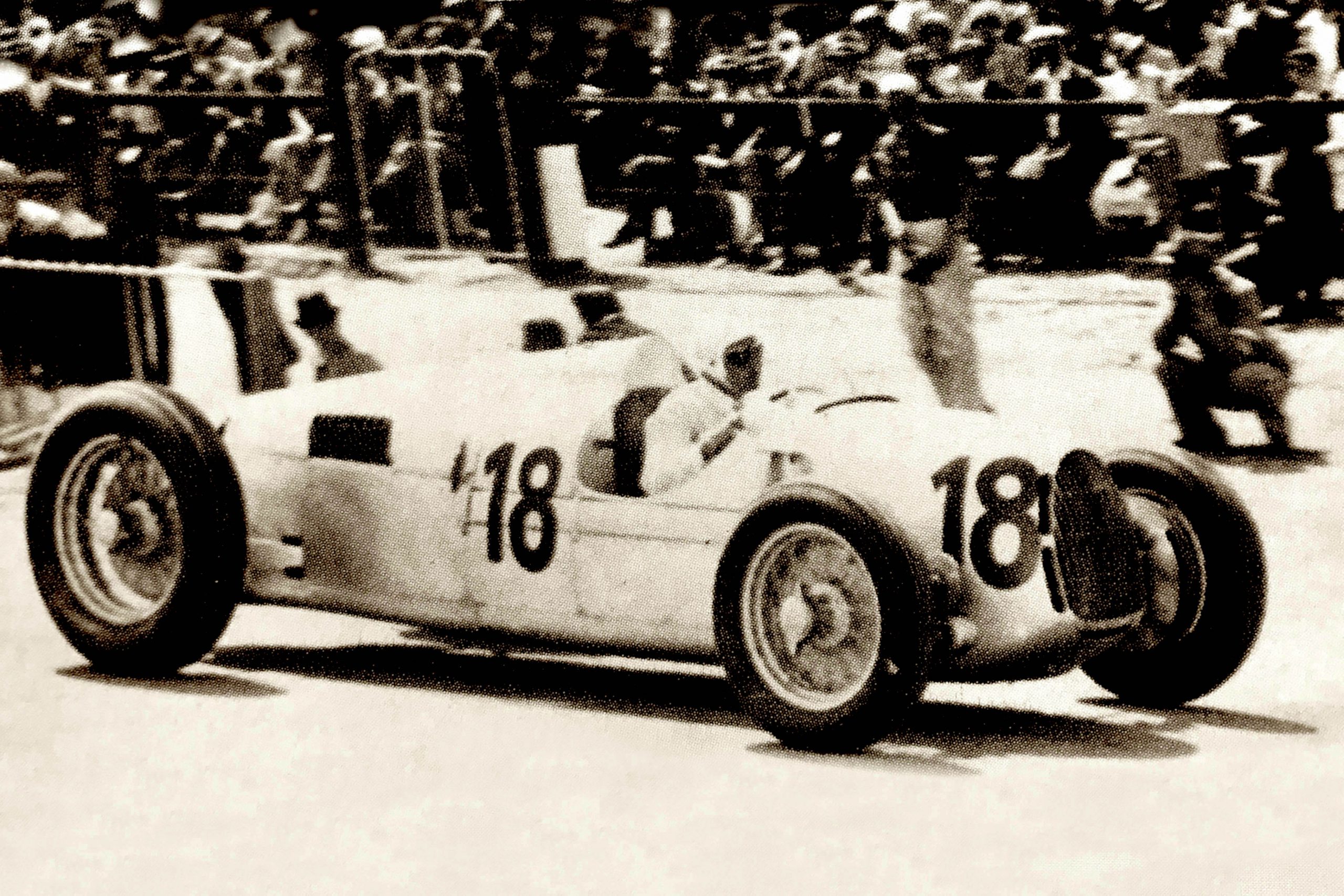 “The Germans having gained their one-two victory they were accustomed to and having no tyres left, sailed for home. This left Revsch’s 3.8 Alfa Romeo the biggest car for the first Rand Grand Prix over the Lord Howe Circuit on January 31st , at Johannesburg.

“Thirteen cars were left for the first race over this sinuous, difficult track, which had been built in a terrific rush in four months and was really scarcely ready to race on. Once more, Pat Fairfield obviously had a big chance in his E.R.A. He was driving beautifully that season and his car’s performance was far beyond what could be expected from so small an engine.

“That first Rand Grand Prix was a killer for drivers. It was 75 laps of 2.3 miles – 172 miles which sounds harmless enough. But that incorporated some really vicious curves in the Lord Howe Circuit and the competitors had to work the whole time.

“Fairfield drove a methodical and clever race to win from Lord Howe. McNicol was the most dangerous South African challenger and was not passed until late in the race. Revsch should have beaten him for third place but miscounted his laps and made a stop on the 74th!

*Prints of the painting ‘African Propaganda’ on top of this page will be available to order on Legends 247 soon.