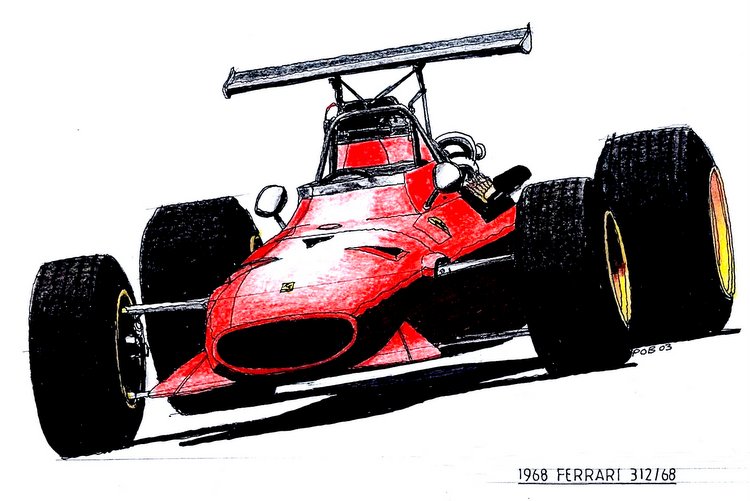 Jacky Ickx made it fly, but Forgheiri’s winged masterpiece deserved so much more

Formula 1 stood on the threshold of an incredible decade in 1968. With rear-engined cars already the norm it was also a sad time as the world mourned the death of Jim Clark amid continued media hype around Chapman’s fabled Lotus 49 and its Cosworth engine, the rise of Jackie Stewart and the Tyrrell-run Matra-Cosworth.

But was the fastest, most innovative and most trendsetting car of the year always been overlooked?

Ferrari’s 312/68 was legendary Mauro Forghieri’s latest Maranello Formula 1 creation, although many believe that 3-litre V12 powered Ferrari’s prowess was masked by Enzo Ferrari hiring the services of two young guns, rather than opting for an established star.

Jacky Ickx and Chris Amon were both quite brilliant, talented and fast drivers, but they still lacked the experience to take on the likes of Graham Hill, Jack Brabham and Jackie Stewart on mano-a-mano.

There was another drawback — the Scuderia was not quite up to the cohesive standard of the top British teams of the time, Tyrrell and Lotus (sound familiar?) and of course as you may have seen in the Ford vs. Ferrari flick, Enzo was still fighting off severe financial difficulties at Maranello leading up to Fiat’s impending ’69 takeover…

The new 312 first appeared at Kyalami early in 1968 with three cars entered for Amon, lckx and Andrea de Adamich. De Adamich’s Ferrari experience was to prove unfortunate — the quiet and under-acknowledged yet talented young Italian test and development driver was also quick enough to out-qualify both of his highly rated teammates on his debut in South Africa.

De Adamich lined up behind Clark, Hill, Stewart, Jochen Rindt, Brabham and Ferrari refugee John Surtees, now in a Honda, but he and lckx retired while Kiwi Amon went on to finish up fourth at Kyalami, a race that would tragically prove to be the late, great Jim Clark’s final grand prix victory.

Then immediately after the South African race, Enzo Ferrari controversially dropped de Adamich from the team in another of his often rather odd decisions that he would go on to regret, in a move that many would consider a mistake…

Ickx was still a rookie in ’68 and the experienced, quick but totally luckless Amon was generally the faster of the duo — he had been in Formula 1 since 1964, but would never win a Grand Prix. The rest of the season only yielded a single win, a second and three third places for the 312/68 in Ickx and Amon’s hands.

The Ferraris, however, shared four pole positions between them over the season’s twelve races, but there was one race that really showed the 312/68’s, incredible class.

At the time, Ickx had established himself as both the rain and Ringmeister when he put it on pole by — wait for it — ten seconds ahead of Amon, with Rindt’s Brabham-Repco a full 15 seconds back in third around the treacherous 21km Nordscheife. Unfortunately, heavy rain and a chaotic race saw the Ferraris fail to deliver on that potential. 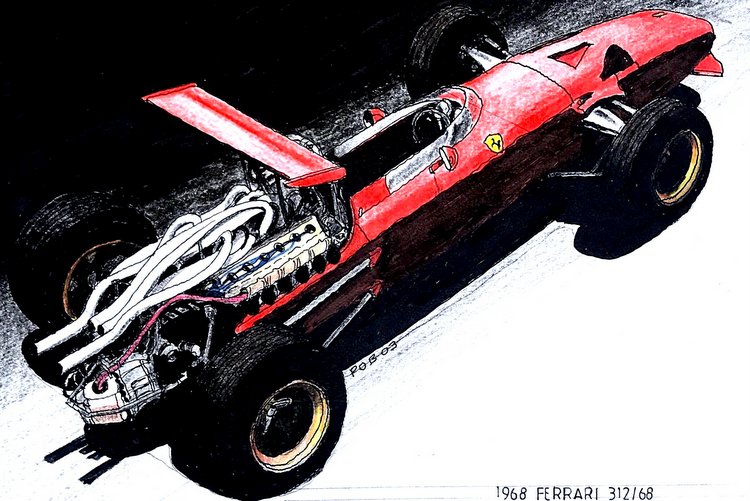 Nevertheless, the Ferrari 312/68 will always be remembered for another world-leading achievement — it was the first-ever Formula 1 car to benefit the aerodynamic advantage of a downforce inducing wing. The genius ingegnere Forghieri attached a pioneering high-mounted rear aerofoil via a pair of long struts to the gearbox behind the engine for the Belgian Grand Prix.

The result proved astounding as downforce generated by the wing produced so much extra grip in the corners that Amon took pole by almost four seconds from Stewart’s Matra at Spa-Francorchamps. Sadly both Amon and Ickx both suffered issues in the race, the New Zealander retiring while leading when a stone pierced the radiator with the home hero finishing third despite a race-long misfire.

Ickx bounced back to score a great maiden win in the rain at the French Grand Prix in Rouen to further reinforce his claim as the king-of-the-rain. Jacky was always quick in the wet and several of his later wins — most of them epic — were to come in similar conditions.

Ickx was however sidelined when he broke a leg in a sports car crash and Derek Bell was drafted in alongside Amon while the Belgian recuperated. Back then, a driver was expected to race Formula 1, Formula 2, sports cars and even saloons to earn his keep, but accidents like his and those that claimed the likes of Clark, Siffert, Giunti and others outside of Formula 1 over the years soon put an end to multi-disciplined careers.

Reliability was to prove Ferrari’s 1968 bugbear as the team failed to finish any of the final three races — was Maranello paying the penalty for sacking John Surtees early in ’66?

The 1968 season might have been a walkover for the super-quick ‘Il Grande John’ in Forghieri’s magnificent 312/68, never mind that the team would no doubt also have benefited from the only man to ever have won Moto GP and Formula 1 titles. His insight into set-up and development expertise is a fable of that era.

Despite carrying up to 70kg more fuel than its more frugal Cosworth powered rivals, the extra downforce from its groundbreaking rear airfoil – which has since become a critical Formula 1 aspect ever since.

All-in-all, the package as they say today, which was Ferrari’s marvellous 48-valve V12 (with its contorted ‘bunch of snakes’ exhausts emanating from the engine’s centre-vee) was a match for any car on the 1968 Formula 1 grid.

So, yes, 1968 could very well have been another double F1 championship for Maranello — especially considering the tragic and untimely loss of Jim Clark in a Formula 2 race at Hockenheim after the Kyalami season opener.

Many believe that Surtees would have won with Ferrari that year

Could Surtees would have beaten ’68 world champion Graham Hill in the Lotus-Cosworth 49? Many certainly believe so.

Instead, the red cars’ potential technical superiority was absorbed by young Amon’s 0.2 to 0.8% driving speed deficit compared with the experienced Hill, Rindt and Stewart, while the then even less experienced Ickx was on average 0.5% slower still than Amon.

Retaining de Adamich may have allowed his technical ability and pace to make a difference alongside Amon, who was similarly noted as a development driver. Ickx was however not so mechanically inclined, relying more on intuitive driving talent and especially his incredible pace in the wet.

All of which was indeed a pity and most probably a waste of technology, for the Ferrari 312 proved statistically 0.6% faster than the now legendary championship winning Lotus 49, so who knows what could have been…? (Input & illustration in conjunction with Patrick O’Brein)