What gives the Dakar its rugged reputation? We take a look at the incredible history of an epic race

The Dakar Rally is usually a challenge to finish. This year, it’s proven a challenge to start as competitors and officials fought through lockdown, red tape and travel restrictions to even get to Jeddah for Sunday’s start.

But what gives this epic challenge its rugged reputation? We take a look at the Dakar’s incredible history on the eve of the 43rd running of the ultimate race.

The Dakar started off as more of an adventure race that set off in Paris and raced against all odds into Africa and on to Dakar in Senegal. Those early, carefree years were quite different to the professional flat out race the race has become. Always catering for cars, bikes and trucks, the first race left midwinter Paris in December 1978.

Two weeks later, it was Alain Génestier’s Range Rover (above) that crossed the finish line first in Senegal. Cyril Neveu’s Yamaha took the famous first bike win and Jean-François Dunac set the truck precedent aboard a Pinzgauer. Yamaha is still at it in 2021, but will Land Rover be back? Its presence as a support vehicle supplier for the first time in many years has raised eyebrows… 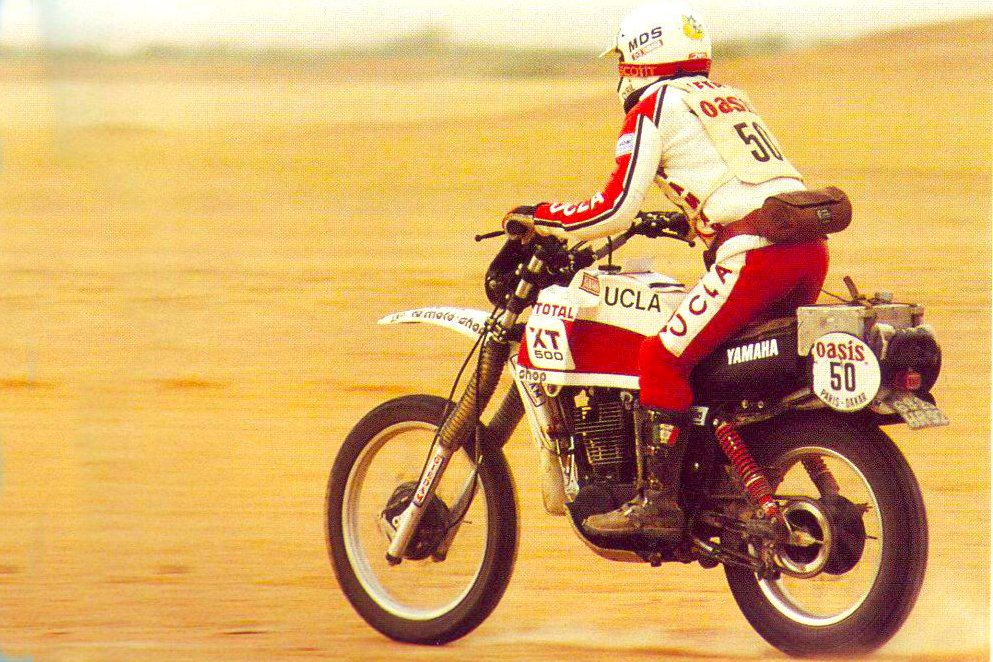 The multitalented Freddy Kottulinsky powered his Volkswagen Iltis to the 1980 win as Neveu did the double for Yamaha, while Miloud Altaunat took truck honours in a Sonacome. Dakar legends René Metge’s Range Rover and Hubert Auriol on a BMW took two and four-wheeled victory in ’81 while Henri Gabrelle took truck honours in an ALM-Acmat.

Claude Marreau winning the car race in a Renault, Neveu taking his third and Honda’s first bike win and Georges Groine taking the truck win in a Mercedes-Benz were however dwarfed by British prime minister Mrs. Thatcher’s son Mark and his Peugeot crew getting lost for two weeks in the desert. Perhaps that was also the trigger for bigger things at the Dakar… 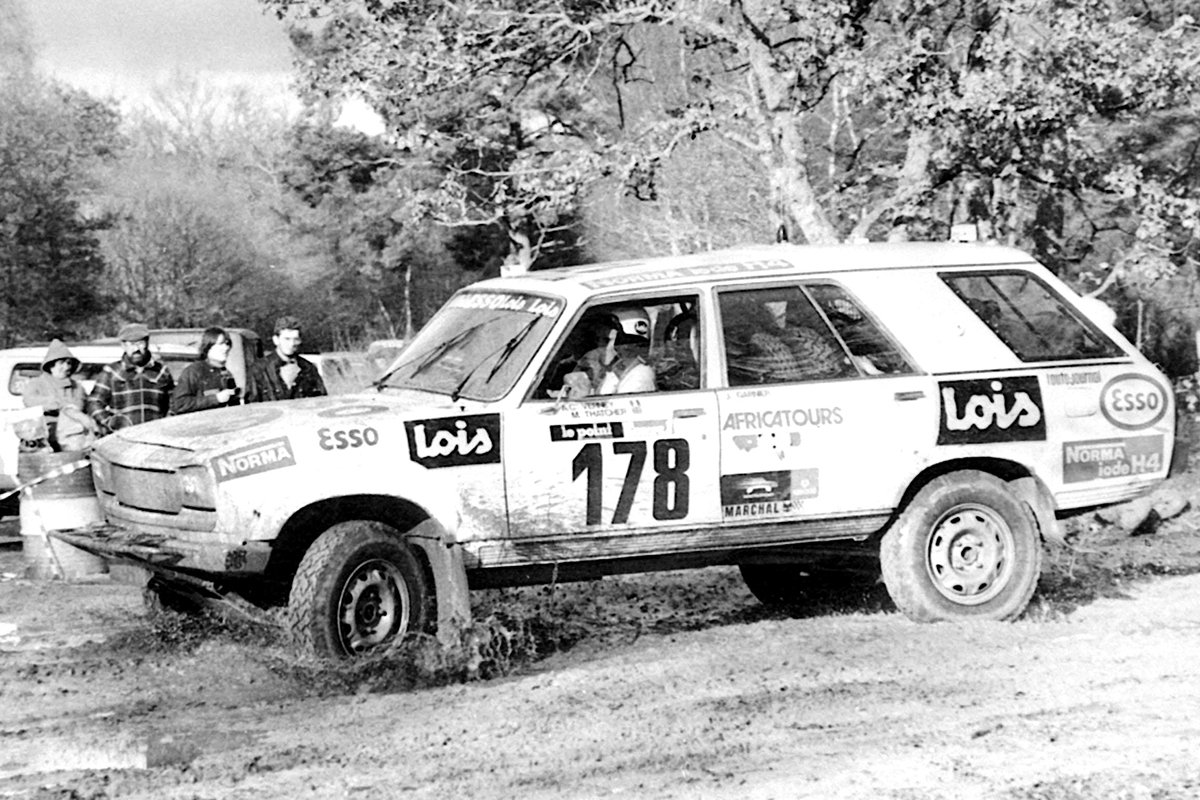 1983 saw a more professional Dakar as Jacky Ickx stormed to the car win in his Mercedes 280 GE, while Auriol took a second BMW bike win and Georges Groine made it a double with another Mercedes-Benz truck win. René Metge then took a second car win aboard a Porsche 911 the following year as Gaston Rahier raced to his first bike win for BMW and Daniel Durce took truck honours for Mercedes-Benz. 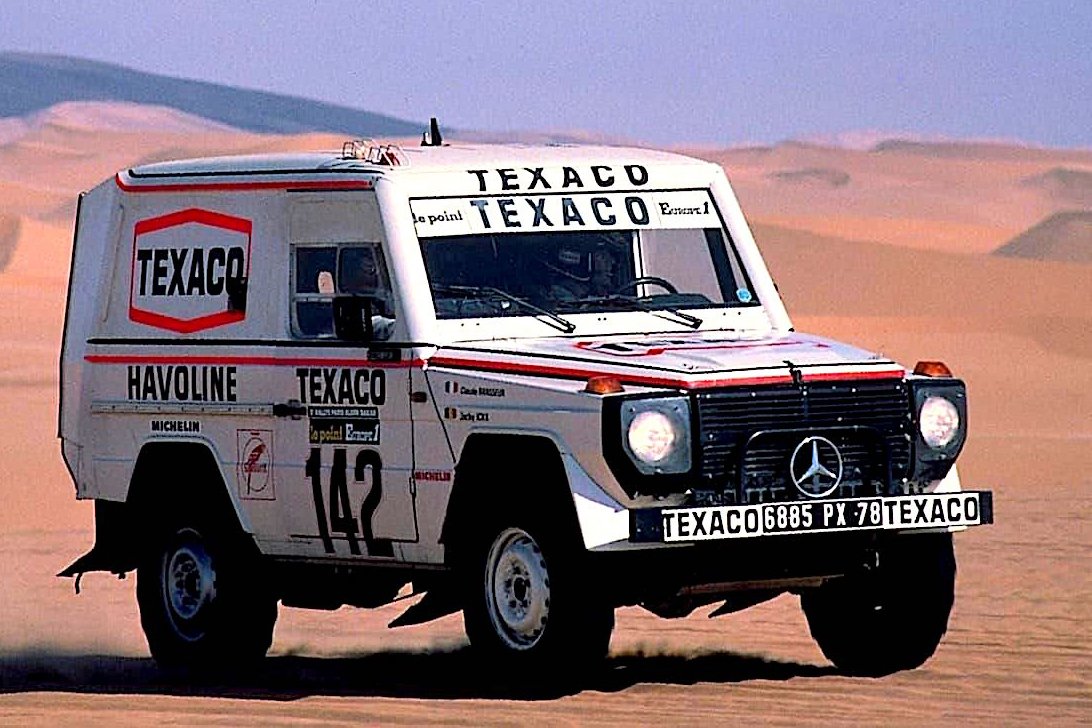 Dakar 1985 was a tragic year as the driving force behind the race, Thierru Sabine and five others died in a helicopter crash. The race went on and Patrick Zaniroli took Mitsubishi’s first Dakar win, Gaston Rahier did it again and BMW Karl-Friedrich and Jost Capito delivered a Mercedes-Benz truck hat trick.

Dakar was far more professional by 1986 when René Metge won the cars in a factory Porsche 959, Cyril Neveu took his fourth bike win for Honda and Giacomo Vismara toon Mercedes-Benz’s fourth truck win on the trot. 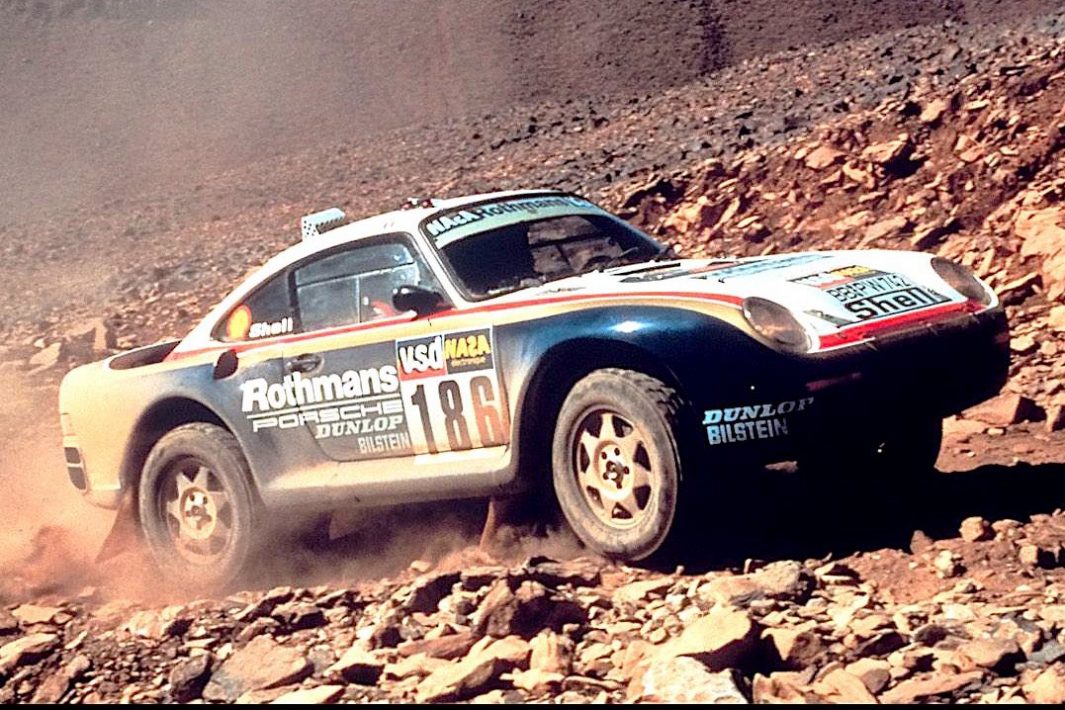 Peugeot exited the World Rally Championship and arrived in force at Dakar ’87. Ari Vatanen promptly took his maiden win on debut, while Cyril Neveu took his fifth win on a Honda and Jan de Rooy took truck honours for DAF. Vatanen was set for a second straight win in 1988 when an aspect that would over time shape the future of the race, raised its ugly head.

They kidnapped a Peugeot

Bandits ‘kidnapped’ Ari’s Peugeot and held it ransom. That allowed teammate Juha Kankkunen to race is 205 T16 as Edi Orioli took his maiden win for Honda and Karel Loprais took his first truck victory in a Tatra 815. 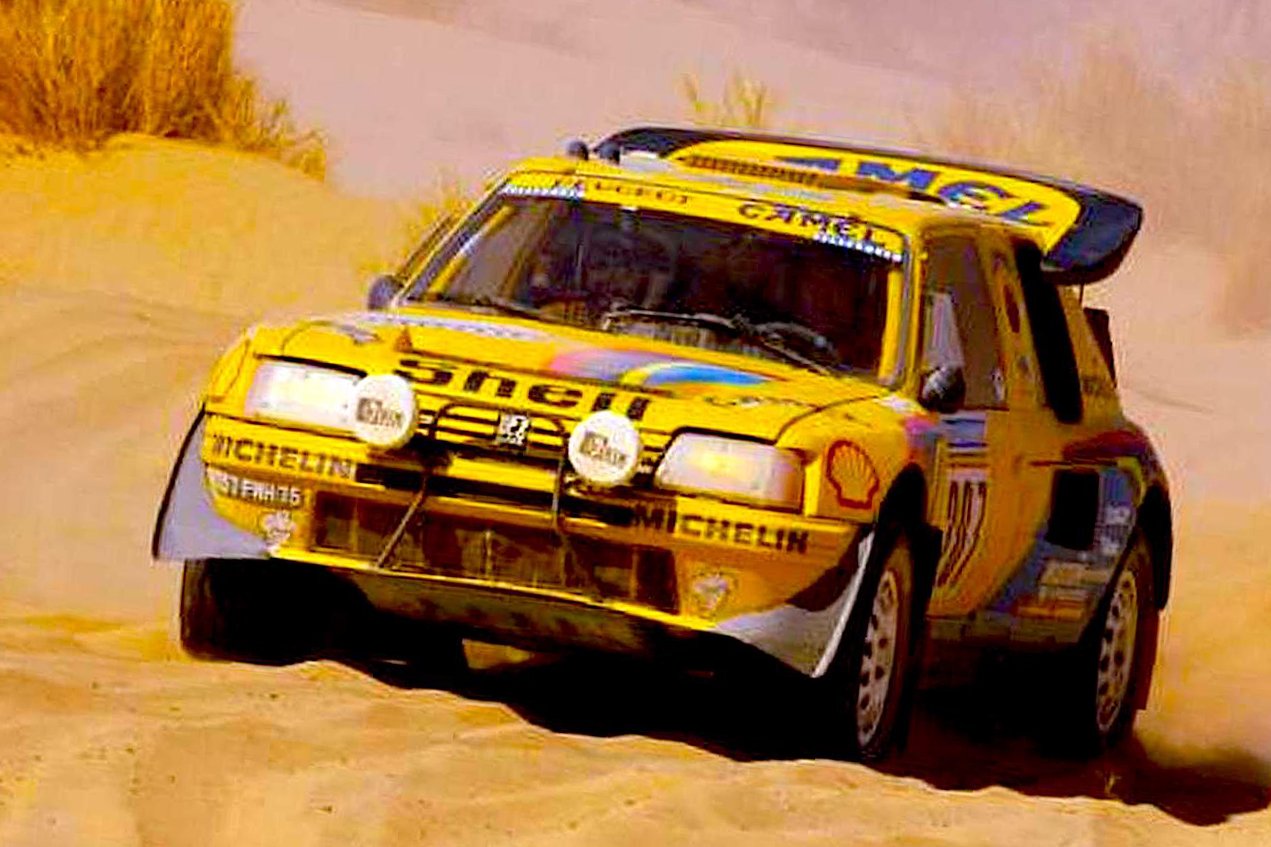 There was a different kind of Peugeot controversy in 1989 when team boss Jean Todt tossed coin to decide which of his cars would win. Ari Vatanen scored that luck. Gilles Lalay took another bike win for Honda. Vatanen won again for Peugeot in 1990, when Edi Orioli gave Cagiva a blke win and Giorgio Villa won truck maker Perlini’s first Dakar too.

Peugeot pulled out, but sister brand Citroen rebranded the cars ZX and sprayed them red as Ari Vatanen stormed to victory number four. A young Frenchman, Stéphane Peterhansel turned the bike race on its head as he rode his Yamaha to victory and Jacques Houssat added Perlini ‘s second truck win.

It was all change in 1992 as the race finished in Cape Town, rather than Dakar. Hubert Auriol took his third and Mitsubishi’s second Dakar win, Peterhansel won the bikes again for Yamaha and Francesco Perlini took his eponymous 105F to its hat trick of truck wins. Bruno Saby took another car victory for Mitsubishi back in Dakar in ’93 as Peterhansel and Perlini won again.

Pierre Lartigue then delivered a hat trick of car wins aboard his Citroën ZX between 1994 and ’96. Edi Orioli won twice on a Cagiva in ’94 and on a Yamaha in ’96, while Peterhansel took his Yamaha to his third bike win in’95. Karel Loprais won two more truck Dakars for Tatra in 1994 and ’95 before Viktor Moskovskikh took Kamaz’ first win in ’96.

1998 attack Jean Pierre Fontenay’s 1998 win for Mitsubishi was overshadowed by a terrorist attack in 1998. Stéphane Peterhansel won the bikes again for Yamaha, while Wicus van Deventer drove his to the start before going on to the quad win and Loprais wnd the Tatra also won the trucks again.

There was more drama in 1999 as 50 competitors were held up and robbed, while the 2000 race to Cairo had four stages cancelled to terror threats. Jean-Louis Schlesser took his Schlesser Buggy to both those wins, while Richard Sainct did the bike double for BMW and Karel Loprais’ Tatra and Vladimir Chagin’s Kamaz shared the truck wins.

There was more drama in the final race between the original points from Paris to Dakar in 2001, but this time in the race. Schlesser was penalised for unsportsmanlike behaviour, handing an historic win to lady driver Jutta Kleinschmidt’s Mitsubish. Fabrizio Meoni took his and KTM’s first win while Karel Loprais took his sixth win for Tatra 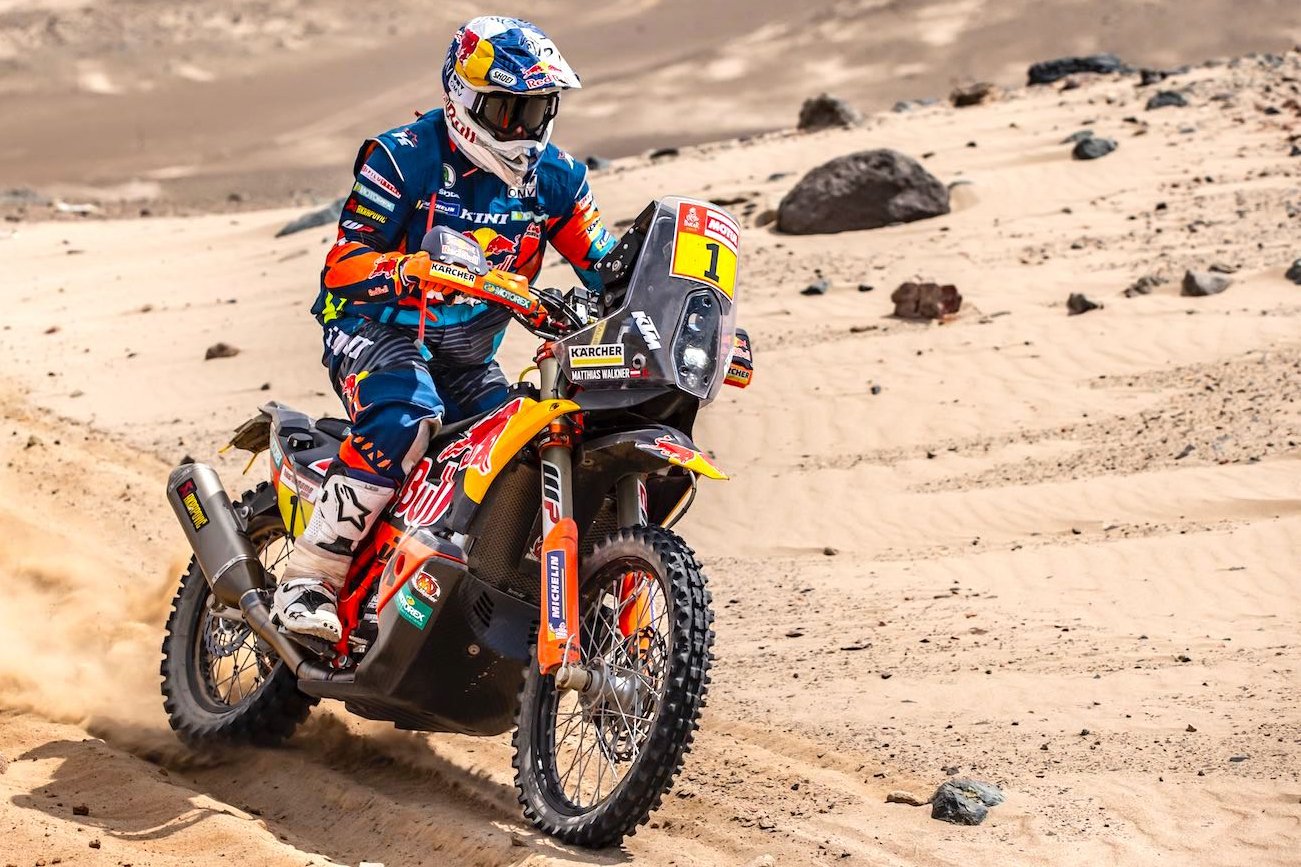 KTM made Dakar its own

Hiroshi Masuoka took the 2003 and 2004 car wins for Mitsubishi, while KTM men Fabrizio Meoni and Richard Sainct shared the bike wins and Vladimir Chagin took both truck wins for Kamaz. Stéphane Peterhansel had moved on to four wheels by 2004, when he promptly won the car races for Mitsubishi. 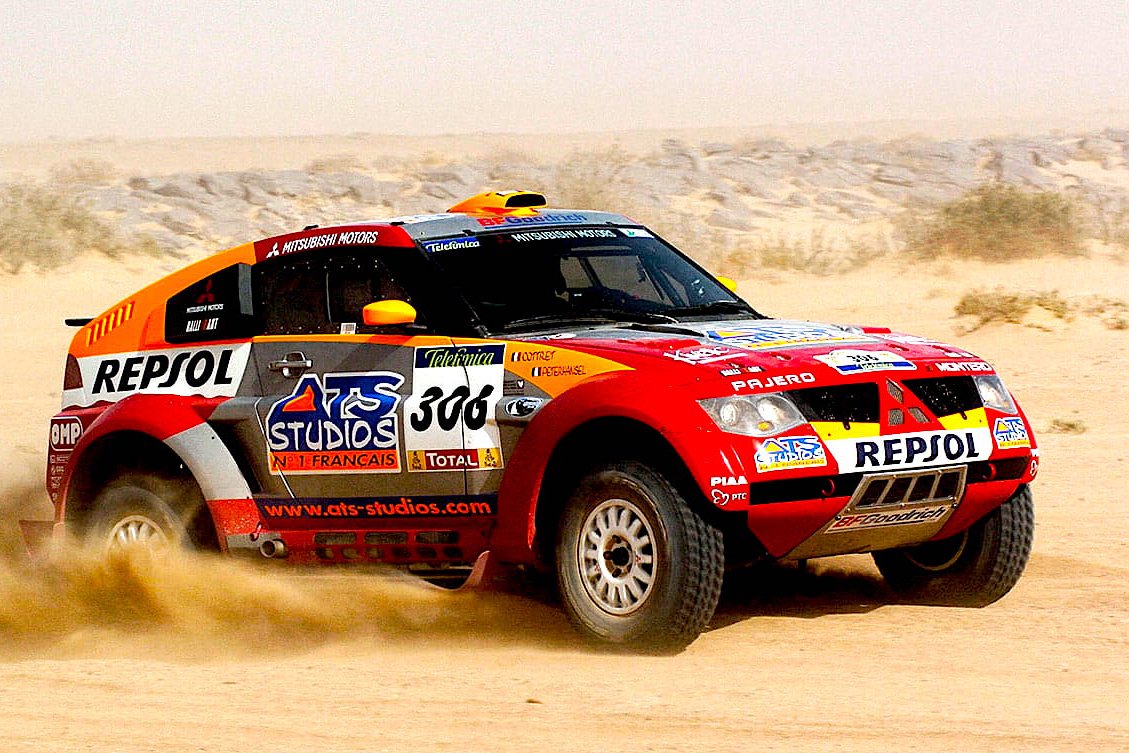 End of the road for Africa

It all changed for the Dakar when the 2008 race was cancelled on the eve of the face due to terrorism concerns. The organisers turned their back on Africa but retained their race’s iconic name as they set their sights on South America. It was a very different race in 2009 as the Dakar traversed the altitude of the Andes as Giniel de Villiers took the win in his Dakar Volkswagen Touareg. 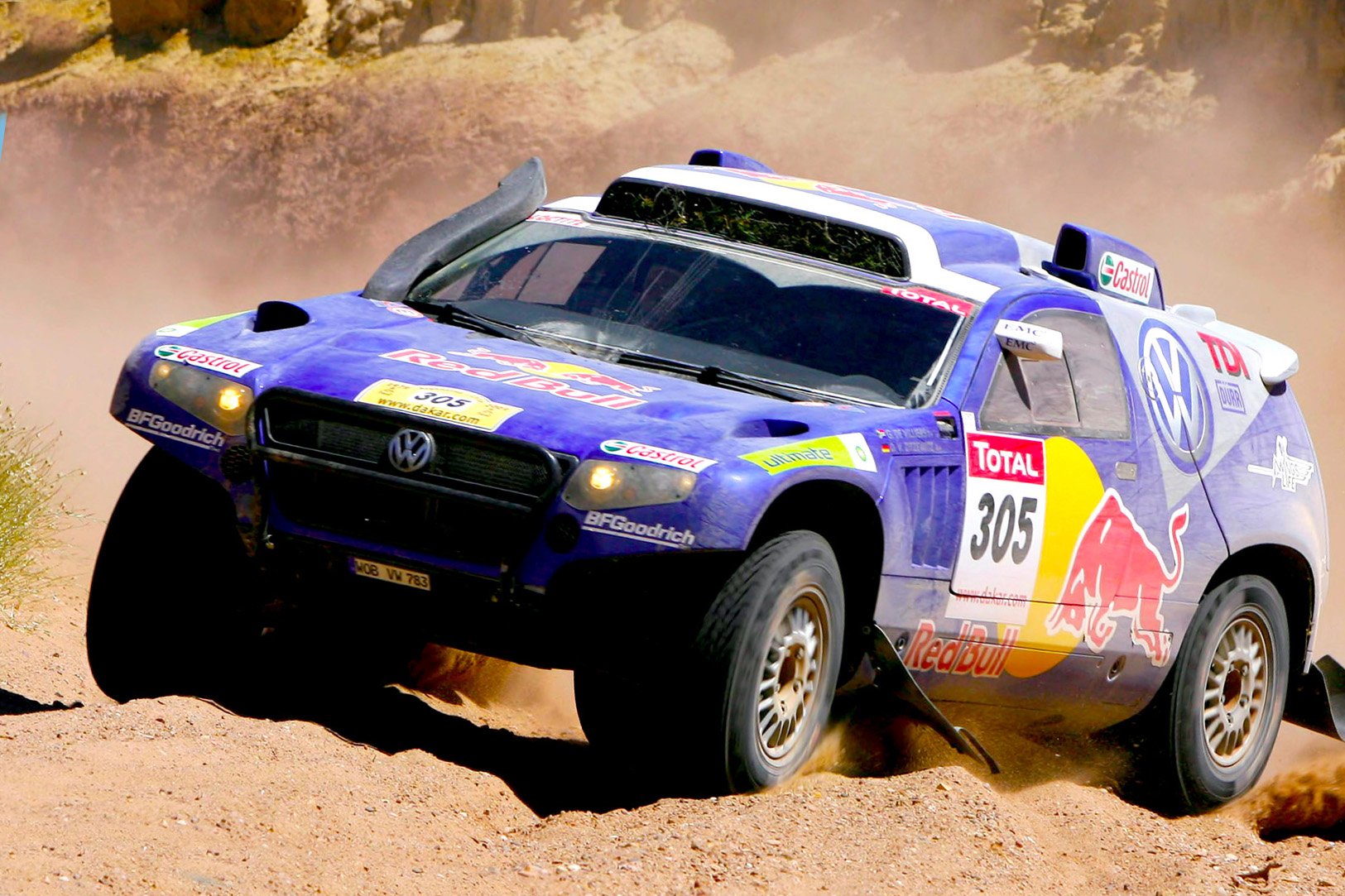 Stéphane Peterhansel then added two more car wins for Mini in 2012 and ’13 while Cyril Despres added a couple more wins for KTM, the Patronelli brothers shared out the quad wins again and Gerard de Rooy’s Iveco and Eduard Nikolaev’s Kamaz won the trucks. Nani Roma added the 2014 car win for Mini to his bike win a decade prior, Marc Coma won for KTM, Ignacio Casale took quad honours as Andrey Karginov took the trucks for Kamaz.

Nasser Al-Attiyah took his second win for Mini in 2015 as Coma won again for KTM, Rafał Sonik ook the quad win and Ayrat Mardeev won again for Kamaz. Peugeot returned to the Dakar in 2016 and despite a Min protest on a refuelling irregularity, Stéphane Peterhansel stormed to victory and repeated the feat in 2017. 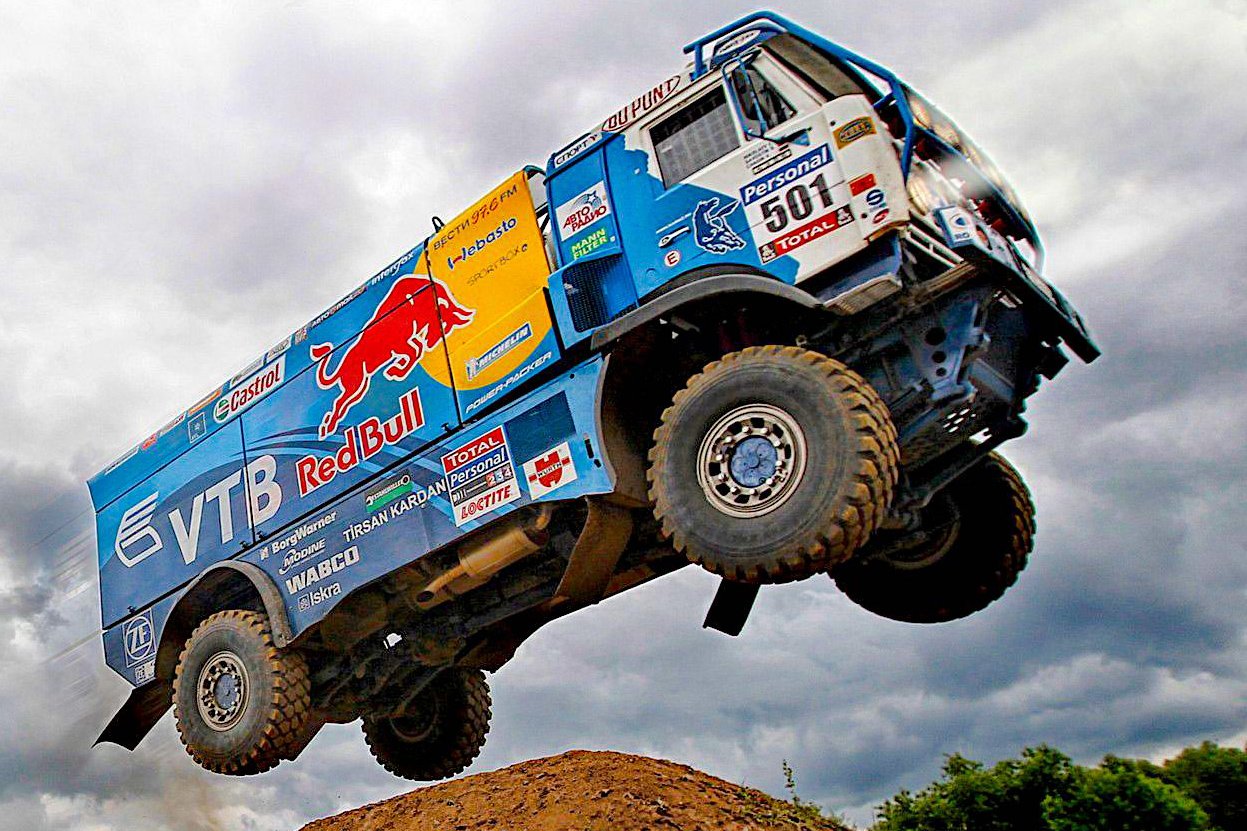 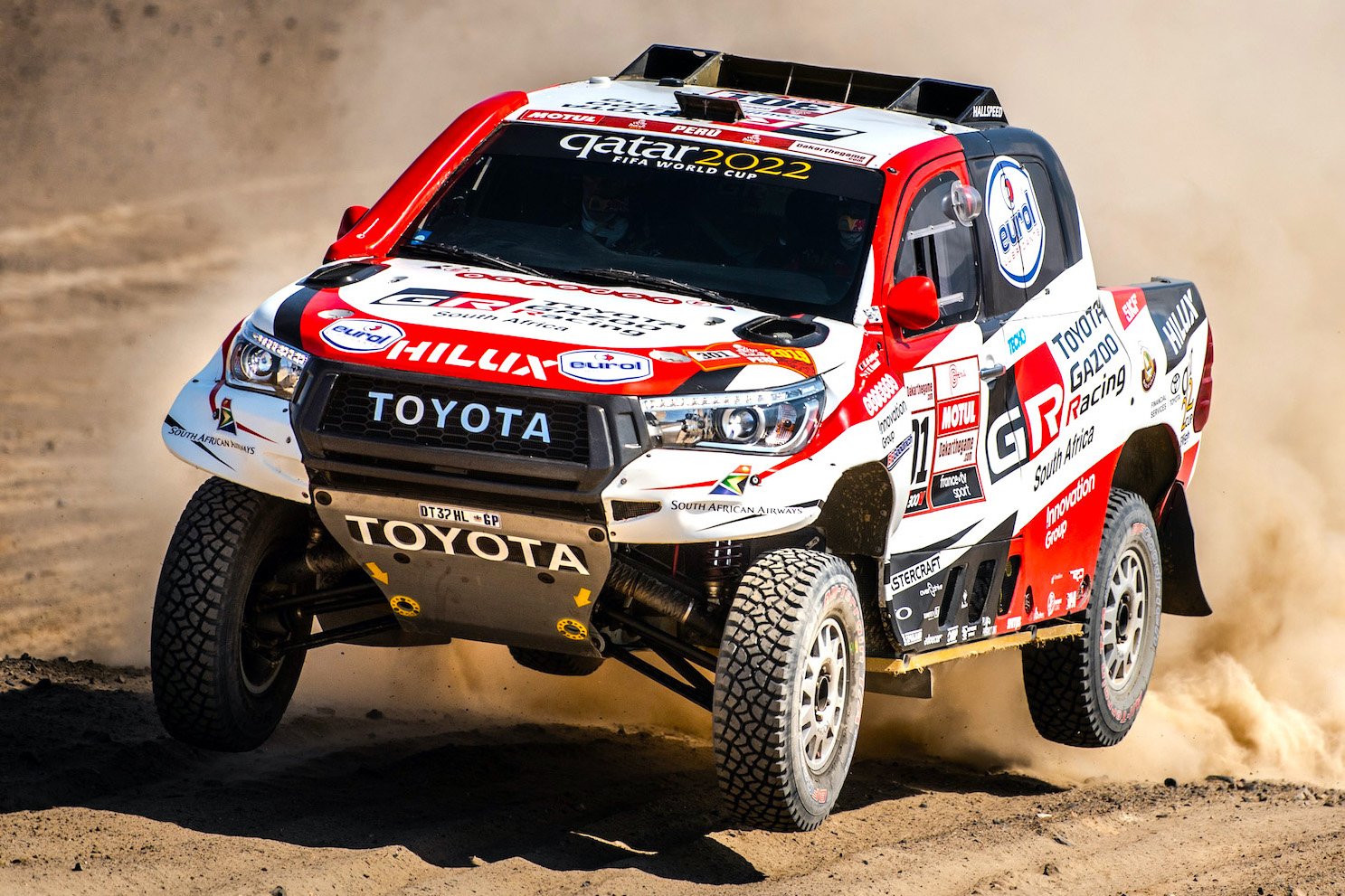 With little prospect left in South America, the Dakar moved to Saudi Arabia in 2020. Carlos Sainz won the car race in his Mini Buggy to make it here wins for three carmakers as Attiyah had done the previous year, while Ricky Brabec finally broke the KTM stranglehold for Honda in a race marred by the death of Paulo Gonçalves. 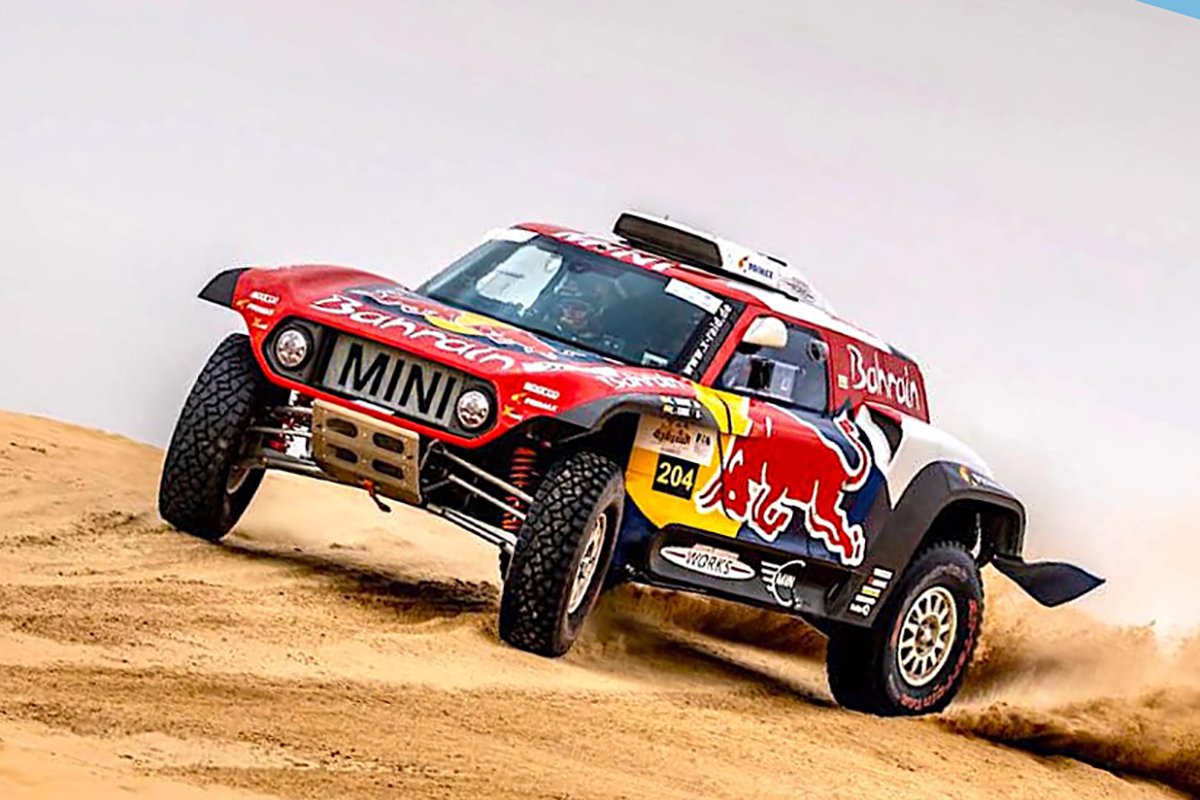 And that’s just the start for the Dakar…

The 43rd Dakar starts at Jeddah on Sunday 3 January 2021. It will have a little more history to add by the time it is done on the fifteenth. The Dakar is also on the verge of bigger things, with Audi recently confirming its arrival in 2022 on the cusp of a new challenge for alternative fuels in the toughest race on earth. So it seems Dakar history has only just begun…