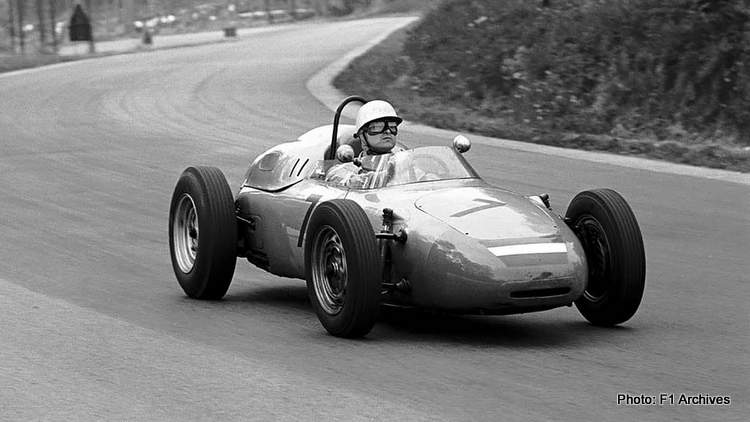 Jonkheer Karel Pieter Antoni Jan Hubertus Godin de Beaufort was born into a Dutch noble family with close ties to the Dutch royal family in 1934. Carel loved cars from a very early age – an affliction he would carry for the rest of his life.

De Beaufort enrolled in a grammar school but dropped out as his father pushed for him to become a cavalry officer and he was soon in command of a 49-ton tank. Carel’s mind was however always drifted to cars and before too long, he became bored with his military role when he by chance net met Eindhoven car dealer Thieu Hezemans.

Hezemans convinced the young nobleman that a career in motorsport was what he really wanted, in what was to prove a brilliant sales pitch to see Carel acquire his first Porsche from Hezemans. When His father passed away when Carel was 16 and the youngster read his misfortune as a signal that he should become a racing driver.

Beaufort’s first competition came in the 1955 Tulip Rally, but he remained intrigued by circuit racing and in 1956, Hezemans, introduced Carel to Porsche competitions director Fritz Huscke von Hanstein who took the young Dutchman on and entered de Beaufort in the Nürburgring 1000kms and the Le Mans 24h Hour, among other races.

De Beaufort took second at the Nürburgring but failed to finish at la Sarthe, but a year later, he was part of the E. Hugus team Porsche 550A RS that won its class and ended eighth overall over at Le Mans in ’58. He returned to Le Mans alongside Herbert Linge in a Porsche 550 RS under the catchy ‘Jonkheer Carel Godin de Beaufort’ team name and Carel beat his previous years lap tally, good enough for second in class and fifth overall, but his further Porsche Le Mans quest saw him retire at each new attempt.

In 1957, de Beaufort entered a Formula 2 Porsche in the German Grand Prix under his own Ecurie Maarsbergen team, back in the days when F1 and F2 cars would race often race together. Thayt proved to be Juan Manuel Fangio’s greatest drives when the Argentine maestro mounted an unforgettable fight back after a botched pitstop, smashing the Nurburgring lap record nine times in ten laps.

Only fifteen F1 drivers raced that day with the field beefed up by nine F2 drivers including de Beaufort, whose debut Grand Prix outing would result in a third place finish in the F2 category on the most grueling circuit in the championship – a true testament to de Beaufort’s natural talent behind the wheel.

De Beaufort went on to race several sporadic Grands Prix racing F1 machinery until 1961, when he settled into a full time F1 seat in his own Porsche 718. His best result would be seventh in the tragic Italian GP, one place off the old-school points paying positions following a season where he consistently races in the F1 midfield,

Carel’s 1962 season went better with a couple of points-paying sixth place finishes – one at his first race of the season at his home Dutch Grand Prix home race at Zandvoort and again at Watkins Glen in the United States to earn de Beaufort a 16th place finish in the championship. Two more sixth place finishes followed in Belgium and again in the ‘States in a far more consistent ’63 season where his lowest finishes were two tenth places, although Carel retired in Germany and failed to qualify in Italy.

Beaufort skipped the ‘64 the Monaco GP and retired in Holland before skipping the next three races to arrive for round six in Germany. But Carel crashed in qualifying in the dense forest at the Bergwick corner, his Porsche 718 somersaulted twice and de Beaufort was thrown from the car.

He was rushed to hospital in nearby Koblenz where initial thoughts were that he had broken a leg, but a shattered breastbone consequently lead to spinal injuries and paralysis and Carel Godin de Beaufort tragically succumbed to his injuries at just 30 years old on Sunday 2 August 1964.

Ironically, de Beaufort had mastered the Nurburgring Nordschleife early in his career a track with a rollercoaster nature enough for Fangio to admit he couldn’t sleep for days after racing there as he could still feel the leaping of his Maserati every time he closed his eyes.

Carel Godin de Beaufort’s extraordinary race career has led to him becoming known as the last real amateur Grand Prix driver, due en large to his lack of experience in cars beforehand. Despite his lack of experience, de Beaufort was still able to compete against some of the sport’s greats in a career that saw him score F1 World Championship points and claim among the sport’s highest accolades in that ‘57 Le Mans class win.

His performance in the 1963 F1 season is one any current driver would be proud of with 14th place in the old points system, but his tragic death aged just 30 put an end to a career thas was only just starting to develop.

A nobleman who may have bought his way into the sport, his natural ability behind the wheel set Carel de Beaufort apart as a handy and talented driver.