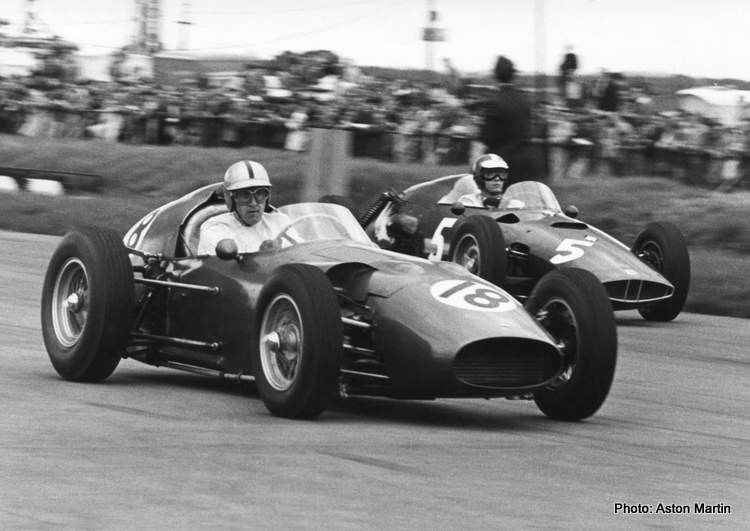 Aston Martin is known worldwide for its high-profile successes in sports car racing.

Multiple class wins at Le Mans stretch from 1931 to this year’s multi-class victory which secured the GT Manufacturers’ World Endurance Championship. Numerous race and class victories over the years have cemented the brand as one of the great names in endurance racing.

Less well-known though, perhaps, are Aston Martin’s European Grand Prix and, later, Formula 1TM exploits. These may not be as famous, but they are equally notable. Indeed, from the very beginning of the Aston Martin business 107 years ago, founded by Lionel Martin and Robert Bamford in 1913 in a small London workshop, top-flight motorsport participation was integral to the company’s very ethos and identity.

Now, as the British luxury brand prepares to return to the F1TM grid for the first time in more than 60 years, it is the ideal moment to look back on the brand’s previous endeavours in the world’s most competitive and challenging motorsport class. 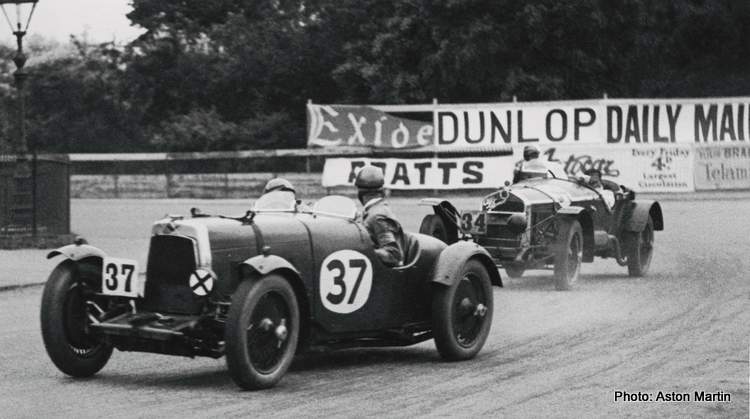 From his earliest days at the helm of the fledgling sports car firm, Aston Martin co-founder Lionel Martin dreamt of putting the name of the business he had created with partner Robert Bamford into the headline-grabbing arena of Grand Prix racing.

The Aston Martin name had been established on the hillclimb courses of Great Britain and Lionel himself had notable success at the wheel of his own car, but he knew competitive Grand Prix racing around Europe would bring the wider fame he craved for his company.

At the start of the ‘Roaring 20s’ that dream moved toward reality when Martin was introduced to a young racing driver, Count Louis Zborowski. This fabulously wealthy son of a Polish Count and an American heiress had an unquenchable thirst for speed, and a strong hankering for motorsport.

With a fortune that in today’s money would comfortably class him as a billionaire, Zborowski had ample resources at his disposal which, allied to his existing knowledge of Aston Martin as a driver of some the brand’s earliest side-valve open wheel racers, gave him the confidence to commission not one but two race cars from the business.

Working with Lionel Martin and his team they hit on a plan to build two cars to compete in the 1922 Isle of Man TT (Tourist Trophy) event. Zborowski supplied around £10,000 for the project – a small fortune at the time – with the money going toward not only the cars but also the creation of an entirely new 16-valve twin overhead cam four-cylinder race engine.

The first Aston Martin Grand Prix car, featuring this 1,486cc unit, was good for around 55bhp at 4,200 rpm. The car weighed in at 750kg, had a top speed of 85mph and carried two seats – one off-set, as per the Grand Prix regulations of the time, to accommodate the riding mechanic who was an essential member of the team not least because part of his job was to pressurise the fuel tank via a hand pump.

Incredibly, by today’s standards at least, the car was driven by road to the race meetings it competed in.

As ever with Aston Martin, the engine itself has a story behind it. While 16-valve race engines had been successfully developed for a few years by 1922 – Peugeot, Bugatti and A.L.F.A. had all developed large capacity 16-valve units for racing and speed record activities – the genesis of the Aston Martin powerplant is believed to be considerably more colourful.

Count Zborowski’s close friend and fellow racer, Clive Gallop, had an acquaintance with Peugeot engineer Marcel Gremillion. The talented Frenchman had been a pupil of the great engine designer Ernest Henry, now at Ballot.

Gremillion persuaded Henry to let him have details of the 3.0-litre Ballot engine. Henry did no more than tear his drawings in half which Gremillion then adapted into the Bamford & Martin single cam, 16-valve, lower-half in return for what was described as a substantial bag of gold coins! 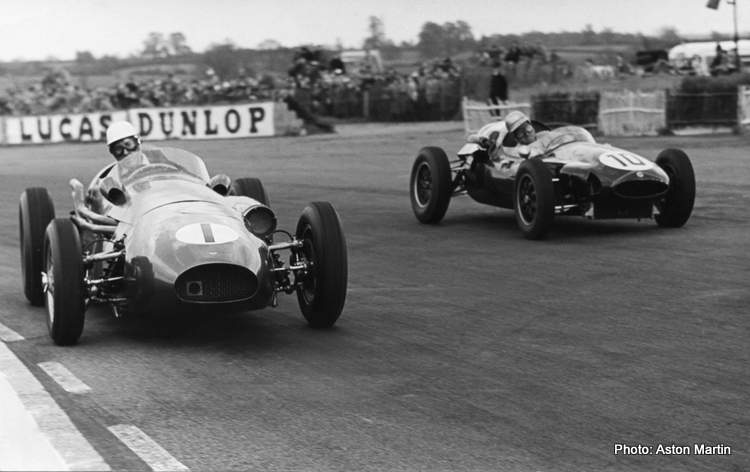 While chassis TT1 and TT2 were intended to race in the Tourist Trophy event on 22 June 1922, time was against the team and they could not be made ready. Instead, it was decided to give the cars their first outing at the 2.0-litre French Grand Prix on 15 July at Strasbourg – thereby marking Aston Martin’s debut in Grand Prix competition.

Zborowski was at the helm of TT1, with Len Martin (no relation) as his mechanic, while Clive Gallop piloted TT2 assisted by mechanic H.J. Bentley (also no relation).

Perhaps unavoidably as a result of a lack of power due to the engine’s smaller-than-race-required capacity, alongside their hurried development and a regulated need to carry ballast, both cars retired with engine problems. But the experience was sufficiently exhilarating for the fledgling team, based at Abingdon Road, Kensington, to continue Grand Prix adventure.

Having been hastily constructed initially, the TT cars were developed over time and in the months and years that followed they secured several podium finishes including a second place at the 1922 Grand Prix de Penya Rhin, staged on the Villafranca circuit. The team repeated the result at the same event the following year; and took third at the Grand Prix de Boulogne, also in 1923.

The untimely death of Zborowski in 1924, almost inevitably at the wheel of a racing car, signalled the beginning of the end of Aston Martin’s first foray into top flight motorsport and, many successful privateer appearances notwithstanding, it would be another 20 years before the brand made another serious impression in Grand Prix racing. 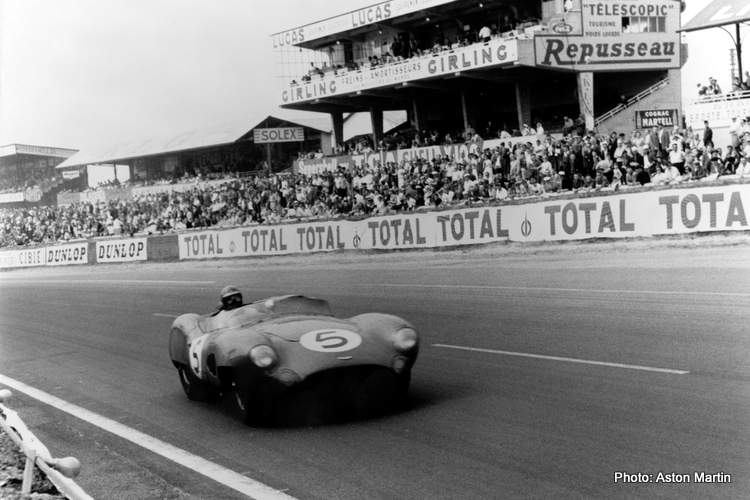 While perhaps technically not a ‘top-flight’ event, the 1946 Belgian Sports Car Grand Prix is worthy of note in the context of Aston Martin’s racing ambitions.

Early post-war motorsport across Europe was a somewhat organic affair by today’s standards of leading-edge technology and relentless development. Many of the cars competing for honours less than a year after World War Two ended were, unsurprisingly, not entirely new.

Pre-war Aston Martin ‘Speed Model’ racers were still competitive, and so it was not a shock to see a now-famous 1936 Aston Martin 2.0-litre sports car compete in the 1946 Sports Car Grand Prix Automobile de Belgique, which took place on 16 June at the temporary road course adjacent to the Bois De La Cambre, Brussels.

At the wheel for this event was one of the most colourful characters ever to be associated with the brand: St John Ratcliffe Stewart Horsfall – or ‘Jock’ as he was widely known.

Born to a well-to-do family and one of six boys, Jock took to the automotive world early and acquired his first Aston Martin in 1934, aged just 24. A successful stockbroker, Horsfall quickly became part of the Aston Martin ‘family’ and helped the brand significantly with development and testing.

During the war he served with MI5 and among his varied duties was the task of driving MI5 officers and agents, double agents, and captured enemy spies from one place to another, very fast. This was all the more remarkable since Horsfall was astigmatic and severely short-sighted, but was averse to wearing glasses to correct his vision.

He was also involved in testing the security of naval sites and airfields and was privy to a good deal of highly classified information. Certainly, his most famous ‘secret’ activity was his role as a driver in Operation Mincemeat – a successful deception of the Axis powers’ forces to disguise the Allied invasion of Sicily in 1943.

Interestingly, it is believed that this secret operation was inspired by a memo detailing enemy deception tactics written in 1939 by Rear Admiral John Godfrey, the Director of the Royal Navy’s Intelligence Division, and his personal assistant, one Lieutenant Commander Ian Fleming.

In the Belgian post-war Sports Car Grand Prix event, Jock’s own vehicle took the chequered flag ahead of a cluster of Frazer Nash, BMW and Alvis competitors. A notable win for a ‘vintage’ machine.

The race car was powered by a four cylinder 1,950cc overhead cam engine that produced around 125bhp, and weighed around 800kg. With an ‘Ulster Style’ open body, two seats, and separate wings it could hit 120mph.

But even the victory in Belgium was perhaps not Horsfall’s crowning glory. That came three years later when he took second in class, and fourth overall, in the 1949 Spa 24-hour race as a privateer at the wheel of an Aston Martin Speed Model. What makes this achievement so remarkable is that while he had Paul Frère available as a co-driver, Horsfall chose to drive the car for the entire 24 hours single-handed.

Sadly, Horsfall was killed a little over four weeks later in a racing incident at the 1949 BRDC Trophy race, staged at Silverstone in the UK. His standing within the ranks on Aston Martin owners and enthusiasts can be measured, though, not least by the fact that the Aston Martin Owners’ Club organises an annual race event in his memory: the St. John Horsfall Memorial Trophy. 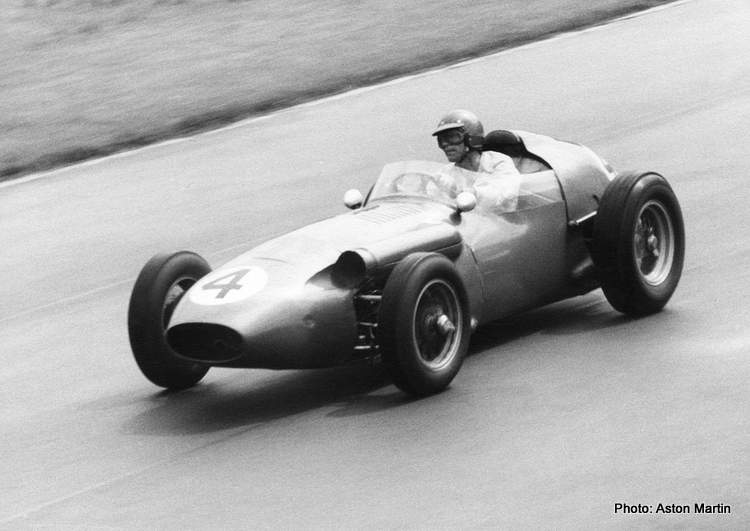 The 1950s were an exciting time for Aston Martin. Company owner Sir David Brown, who had acquired the business in 1947 before adding the Lagonda brand later that same year, was steadily creating finely styled British sports cars of growing appeal.

Sir David recognised the importance of motorsport to the brand’s commercial success and, in 1955, hatched an audacious plan to create cars that would take on the best competition in both the World Sportscar Championship and the still relatively new Formula 1 World Championship.

The history books focus on the famous achievements of the Le Mans-winning DBR1, and the DB3S that preceded it, but the initial venture into single seaters, DP155, could be seen as a valuable learning exercise for the brand, and was the precursor to the later 1950s Grand Prix cars. Alongside this project, Sir David initiated work on a new engine, and a new road car design that would become the DB4.

So it was, then, that the Aston Martin DBR4 came into being. Tested as early as 1957, it was not until 1959 that the car made its competition debut at the BRDC International Trophy event, run to Formula 1 rules, at Silverstone in May of that year.

Two cars competed and car no. 1, driven by 24 Hours of Le Mans winner Roy Salvadori, came in a creditable second behind Jack Brabham in a Cooper-Climax T51. Powered by a 2,493cc, dry sump, six-cylinder RB 250 engine, from the same basic design as the DBR1 sports car engine, the DBR4/250 was a 256bhp spaceframe single-seater which weighed in at 575kg.

Despite being driven by some of the star names of the era, Salvadori and Carroll Shelby among them, the front-engined DBR4 was out of step with the new mid-engined competition and failed to mirror in Formula 1 what it’s DBR1 cousin famously achieved in the sports car arena. After a disappointing debut for its successor, the DBR5, Aston Martin withdrew from top-flight single-seater motorsport in 1960. 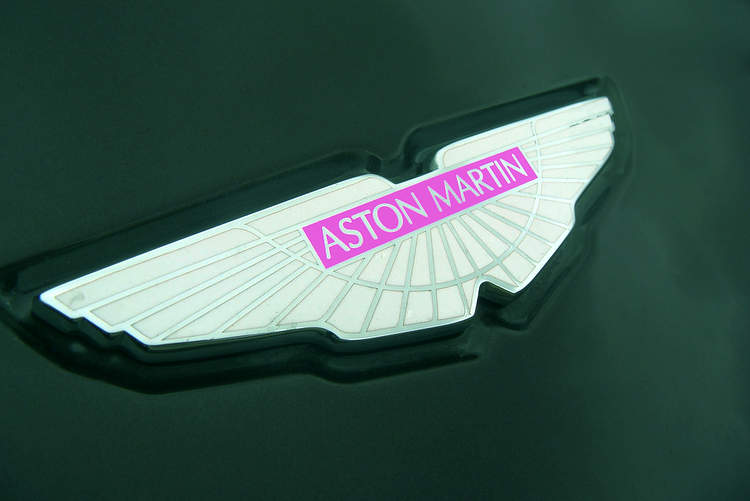 In more recent years, and after a break of nigh on half a century, the Aston Martin wings returned to Formula 1 paddocks around the world as the company became title sponsor and technical partner of Red Bull Racing, a relationship that has also spawned the extraordinary Aston Martin Valkyrie hypercar which is due to enter production in 2021.

The luxury brand is busy preparing a return to the grid in 2021 with the Aston Martin F1TM Team, which will see Aston Martin compete in a competitive F1TM race for the first time in over 60 years and continue the legacy created by founders Lionel Martin and Robert Bamford.

Lawrence Stroll, executive chairman of Aston Martin, said: “The return of the Aston Martin name to Formula 1TM, set against such a colourful and dynamic history in the sport, is a genuinely exciting time for all of us involved with this great British sports car brand.

“Formula. It’s where this brand should be, and I know this next chapter of our racing history will be incredibly exciting for fans of Aston Martin, and the sport of F1TM, all over the world.”