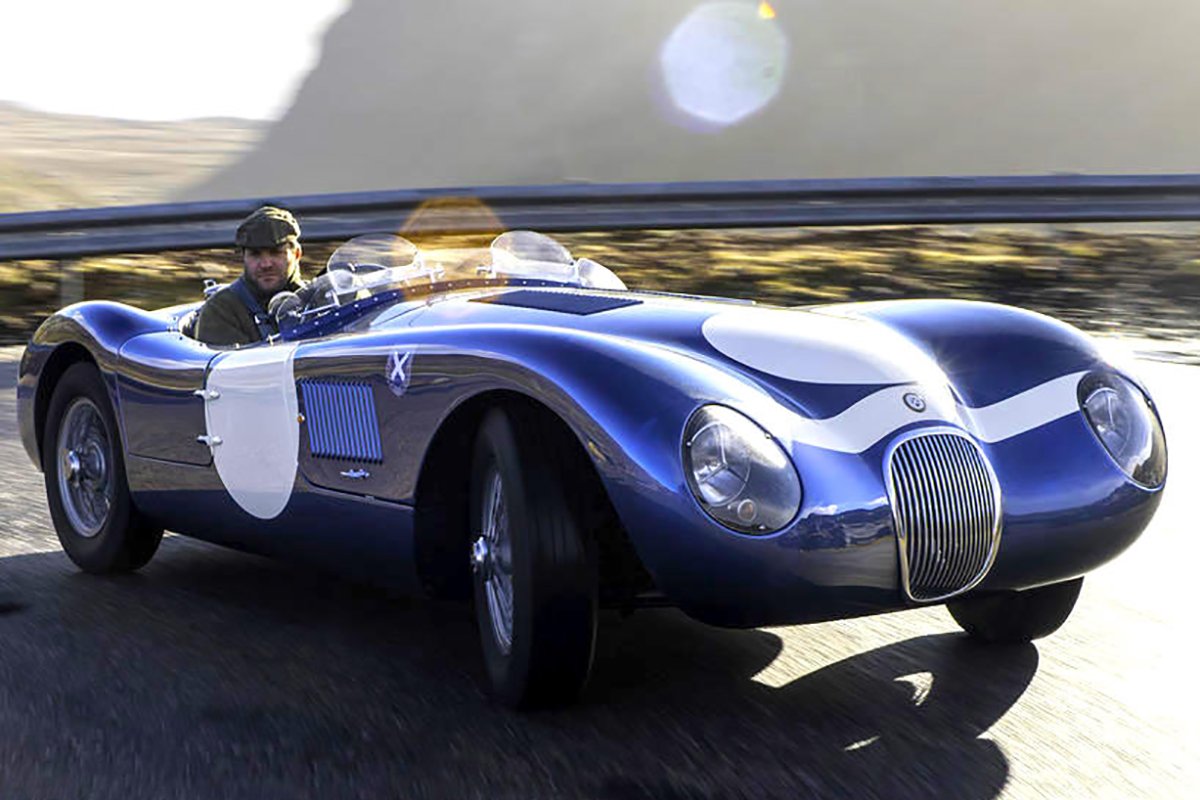 In 1952, pioneer young Ecurie Ecosse team driver Ian Stewart visited Jaguar Cars in Coventry to collect his brand-new C-type. He drove the car direct to its first race on Jersey, where he took on stiff competition from Aston Martin and Frazer Nash. He won at a gallop to open the first chapter the Ecurie Ecosse C-type story.

The team soon enjoyed considerable success on track as its trophy cabinet burst at the seams to contain the silverware of 59 podiums. The team’s seven C-type chassis dominated on track.
Ecurie Ecosse, or Team Scotland’s success was bolstered by team manager Wilkie Wilkinson’s tuning wizardry and founder David Murray’s meticulous planning, all of which contributed to the team’s famous metallic flag blue Jaguar C-types with the white stripe across their noses’ prowess on track.

The the Scottish national team’s crowning glory would course come at La Sarthe, where the team won the 1956 and ’57 Le Mans 21 Hours. But it was its efforts that proved the Jaguar C-type to be the  technological masterpiece it was, that set it apart. It was the first race car ever to be honed in the wind tunnel, the first to use aviation spec bag tanks and famously the first car ever to feature  disc brakes as the test bet for Dunlop’s revolutionary new system. 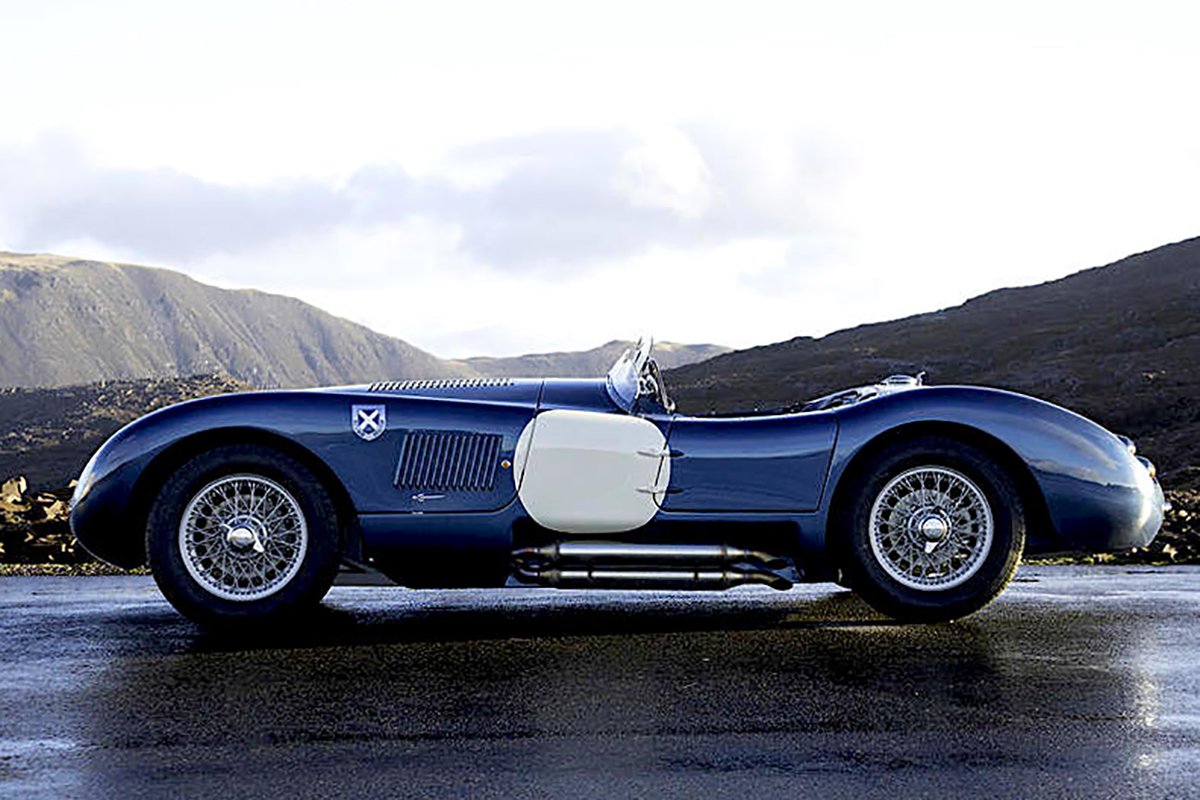 With a steel spaceframe chassis for a rigid backbone, lightweight, thin-gauge, streamlined aluminium bodywork designed by Malcolm Sayer and powered by Jaguar silky smooth twin overhead cam straight-six engine, Stirling Moss always rated the C-type –as far better car than even the D that replaced it.

Now Ecurie Ecosse has created a new continuation to pay homage to its halcyon C-tyle success. “What better to way to celebrate the historic success of the Ecurie Ecosse C-types than to manufacture a batch of cars in their honour?” Ecurie Ecosse boss Alasdair McCaig asked as he introduced the prototype.

“All seven priceless original Ecosse C-types still exist today and now we are paying homage to these cars by creating a numbered sister car to each one. Meticulous in their detail, like their forebears, hand-crafted in Coventry and tuned by Ecurie Ecosse technicians.”

Ecurie Ecosse has retained all the key elements of the 1950s Jaguar racers while also applying a few  considered improvements in team co-founder Wilkinson’s true spirit. The aerodynamic shape remains, still crafted from thin-gauge aluminium alloy and mounted to a steel spaceframe chassis. But it’s now wider and stiffer than before. And laser-cut for accuracy. 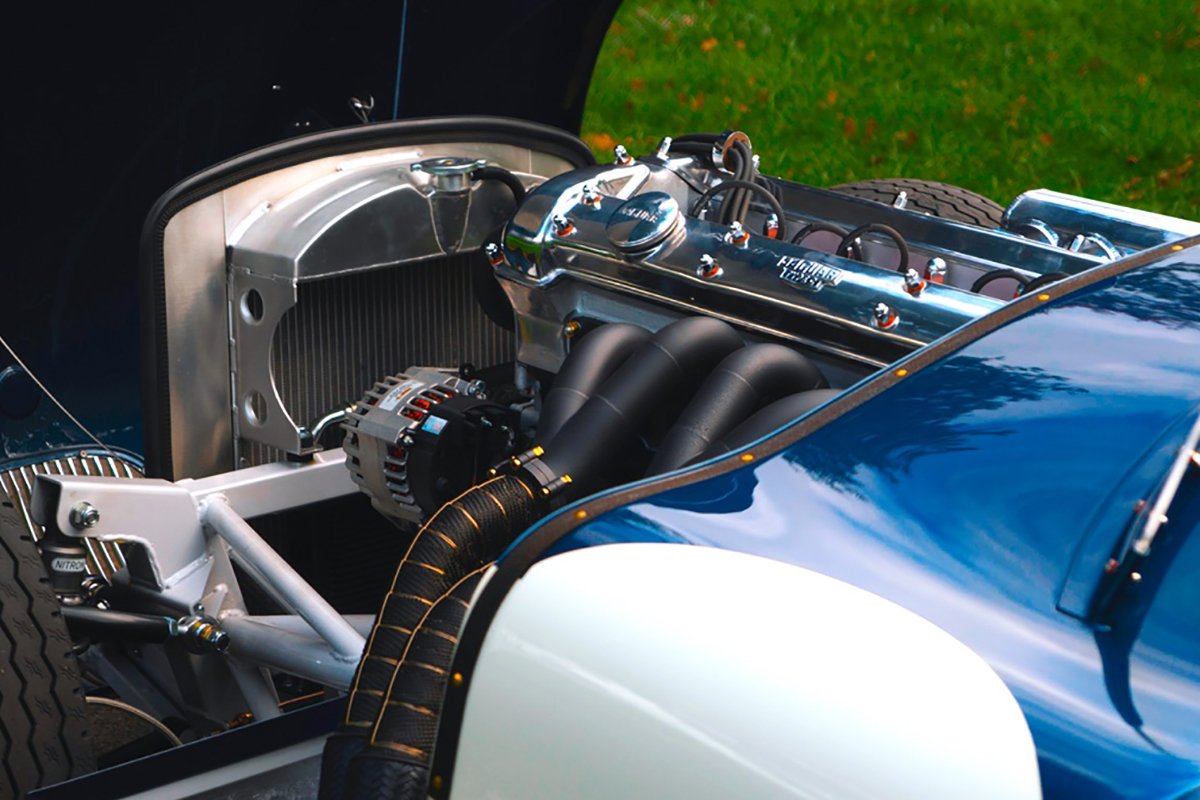 The sonorous Jaguar straight-six XK engine remains too, although capacity is up to 4.2 litres and it is now fuel injected fitted to raise power to 300bhp. Original Jaguar independent suspension and disc brakes have been uprated too, to cope with the additional performance and a five-speed gearbox added to maximise acceleration and top speed, versus the original four-cog ‘box.

The first car is complete and available for viewing and test drive at the firm’s Hofmann’s Henley-on-Thames dealership. It won’t be cheap, but the Ecosse Continuation C-type is guaranteed to be eternally unique.