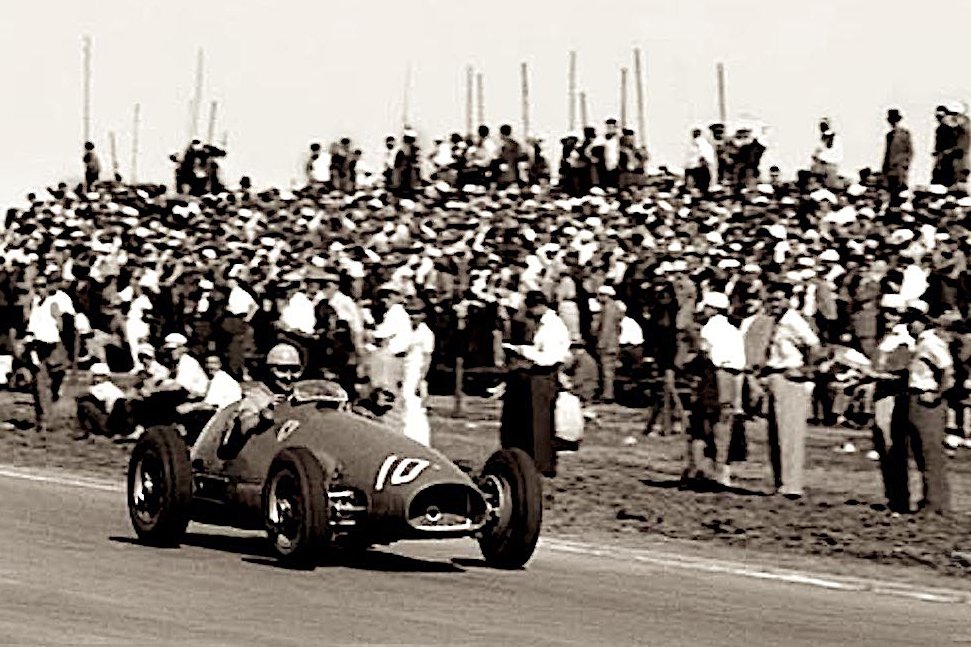 Ascari dominated the Argentine Grand Prix for Ferrari today in 1953. But an out of control crowd spelled disaster

The inaugural 1953 Gran Premio de la Republica Argentina was supposed to be the country’s finest hour.

Maserati, Ferrari, Cooper and Gordini entered their latest Formula 1 machinery for the opening round of the third World Championship. Former champion Juan Manuel Fangio,was back for the first time since clinching the 51 title. He was to race alongside fellow Argentinians José Froilán González (in car with Fangio below) and Oscar Alfredo Gálvez, and Italian Felice Bonetto in a quartet of in a Maseratis. 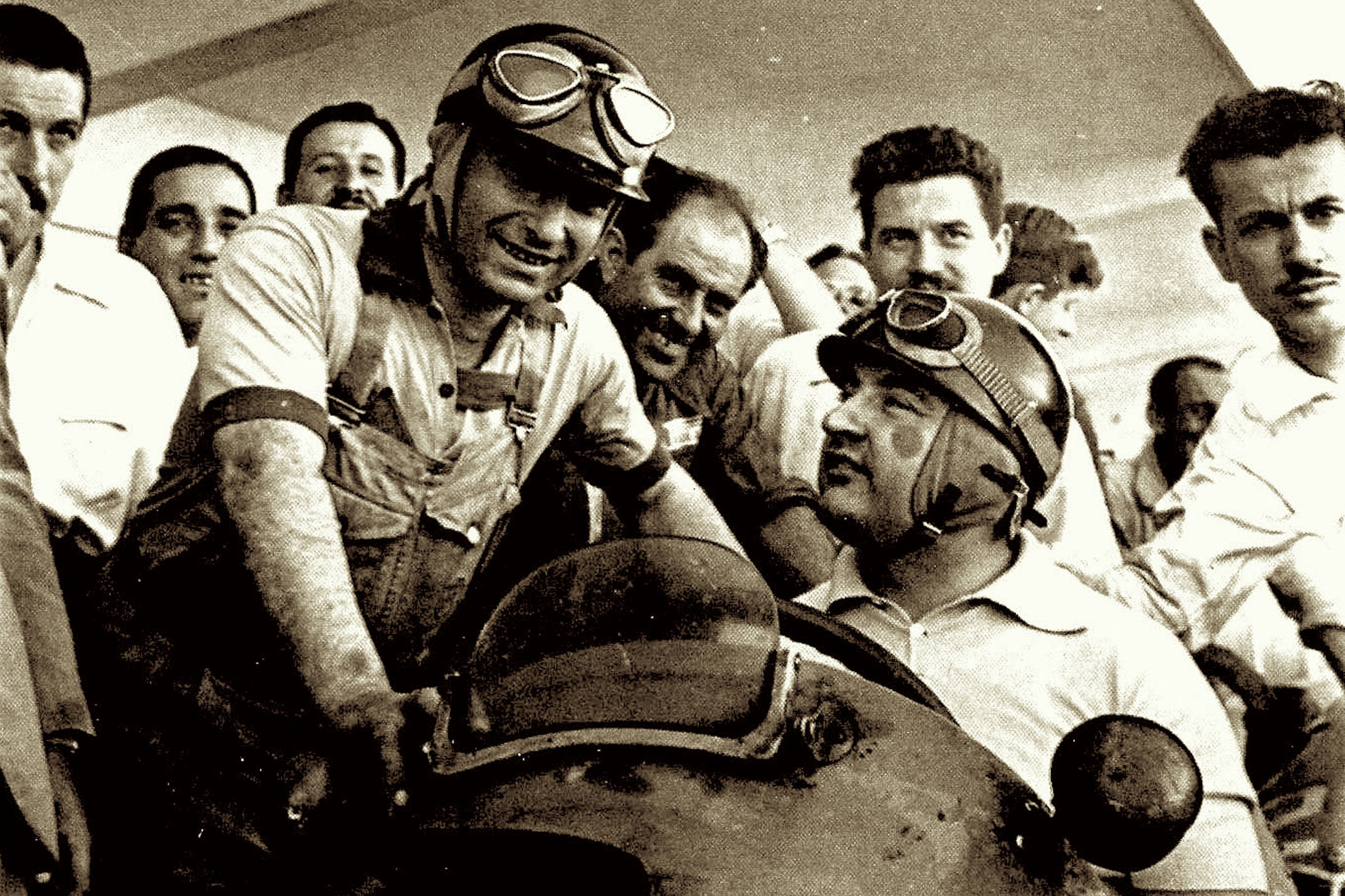 Ascari put his 500 on his fourth consecutive F1 pole position as local hero Fangio prevented a Ferrari front row lockout, qualifying his Maserati second ahead of Villoresi and Farina. And President Juan Perón had decreed free access to the circuit. This was going to be a day to remember… 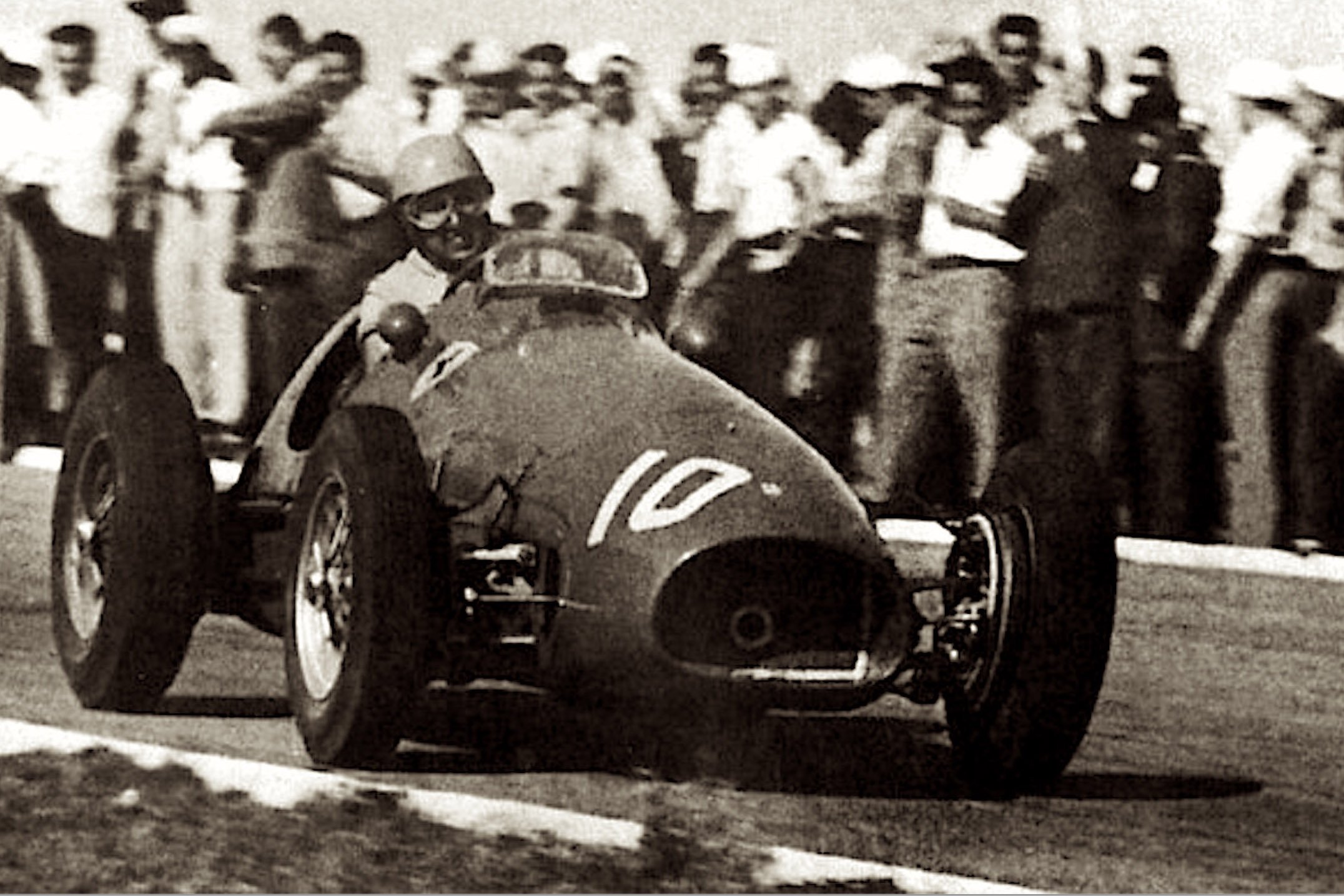 Sadly it turned out to be remembered for all the wrong reasons. Public response was enormous as an excessive and unexpected crowd turned up to take advantage of the free Formula 1 show. Sources vary as to how many spectators actually attended the race. Some suggested between three and four-hundred thousand people. Others hinted that over half a million. Whatever it was, the crowd was out of control.

Then with the stands already packed beyond capacity in blazling in 37C heat, police were unable to contain a growing crowd outside the circuit as tens of thousands more found their way through holes in the fences. A throng had gathered at the edge of the track and on the grass verges as the 4pm start approached.

The drivers and teams became edgy as some suggested postponing or abandoning the race as they pondered the literal wall of people lined along each side of the circuit. They had little alternative but to race. Or face the even more frightening prospect of a riot. 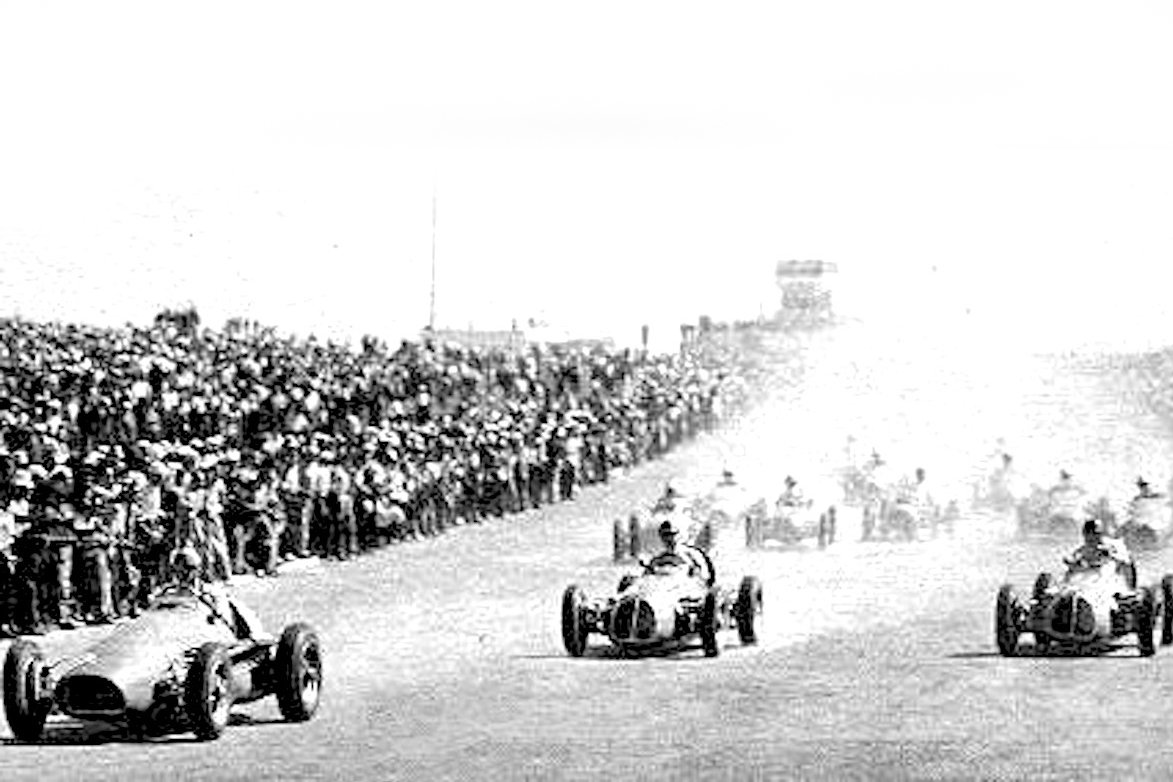 Ascari made off as the start flag dropped and disappeared into the distance. Fangio gave vain chase until his Maserati broke a gearbox to transmission to allow Manzon into second as the home hero retired.

The crowd became restless and ever more frenzied as the race progressed, pressing forward and encroaching onto the track. “Time after time I waved at them to get out of the way, but this only made them worse,” Mike Hawthorn reported after the race. “They began standing in the roadway holding shirts and pullovers, which they snatched away at the last moment like a toreador playing a bull”. 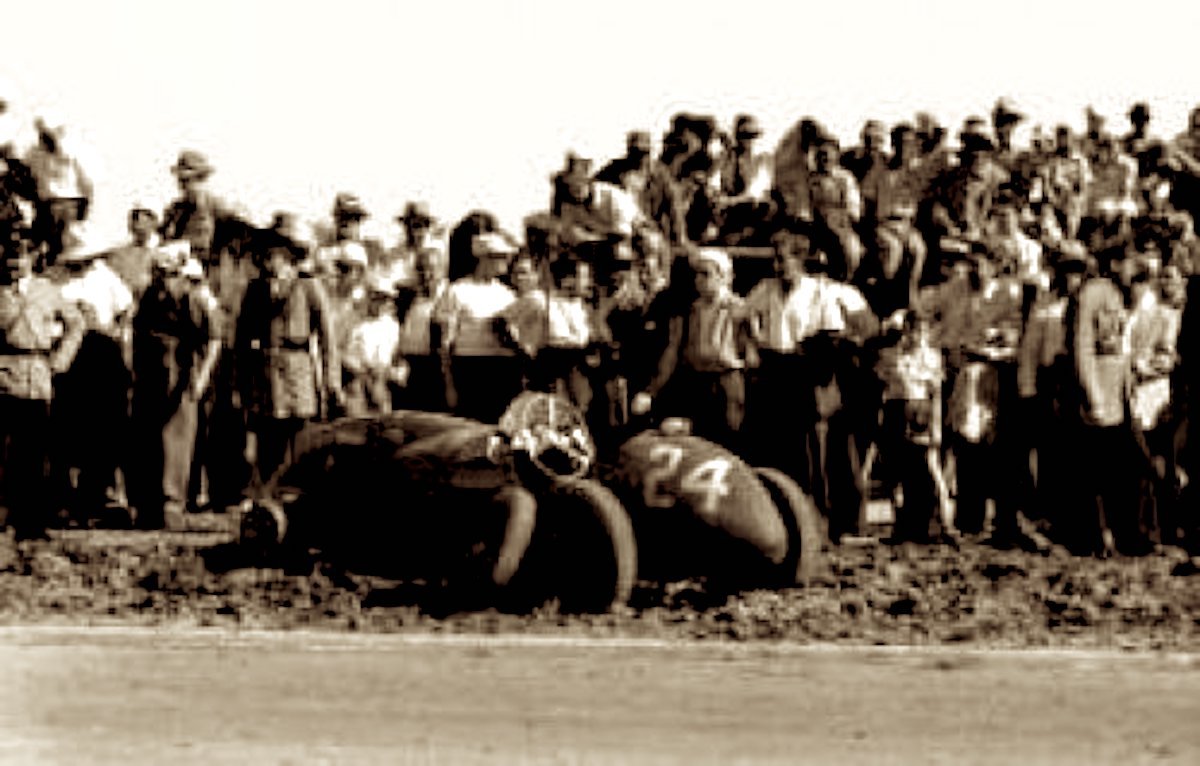 First Adolfo Schwelm-Cruz’s Cooper broke a stub axle and lost a wheel, which wreaked havoc as it bounced into the crowd. Soon after, one of the ’toreadors’ went too far and Farina was forced to avoid a man he encountered at the very last moment on the actual racing line. He managed to avoid the errant idiot, but he lost control and the Ferrari (above) spun off the road, felling hapless bodies as it tore into the crowd.

News of death in the crowd spread swiftly as mass panic ensued. A boy ran in front of Alan Brown’s Cooper and was struck down and killed. Ambulances sent to tend to the injured were also involved in crashes. But the race went on. Until the chequered flag finally brought an end to the chaos three hours later.

Almost academically in the end, Ascari survived the horror as he went on to set the fastest lap and lap the entire field on his way to a hollow seventh consecutive Grand Prix victory. He beat Villoresi and Gonzalez, the first Argentinian driver home in third from Hawthorn and Galvez. Brown pressed on to finish after his deadly accident. His Cooper’s nose bent and after three stops to replenish its leaking radiator water. 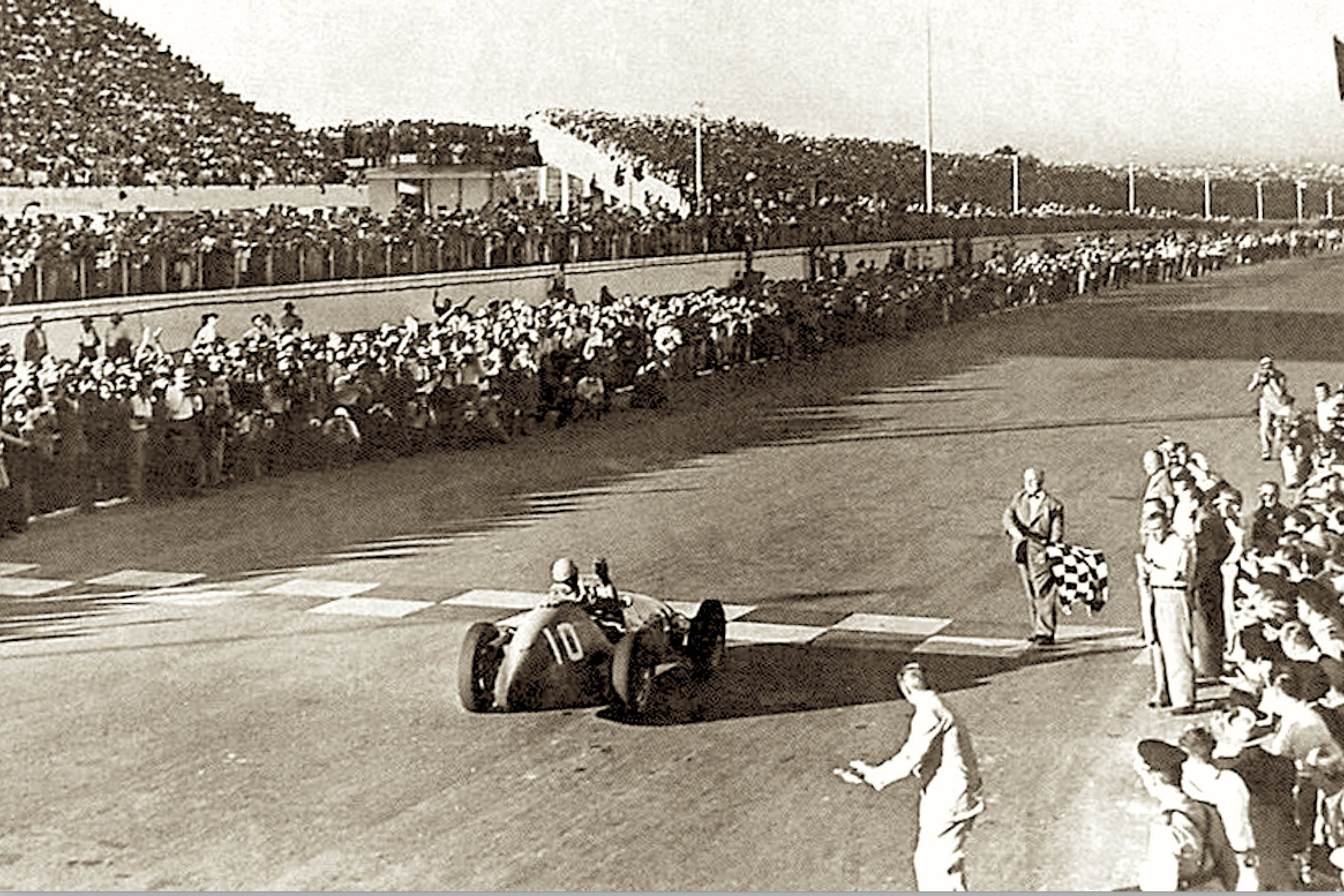 Reports vary on to how many souls actually perished that day. Officials claimed ten people died and 30 more were injured. Some sources however argue that over 30 lives were lost.

Whatever that number really was, the 18 January 1953 Gran Premio de la Republica Argentina was clearly Formula 1’s darkest day. Amd remembered for all the wrong reasons…