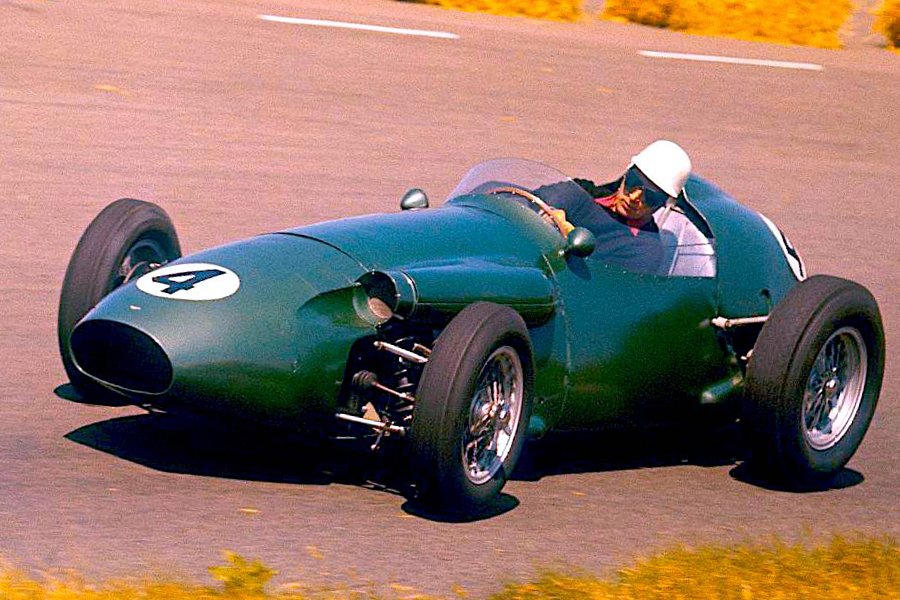 The new team is making a fuss about Aston Martin’s imminent Formula 1 return. Maybe it shouldn’t!

Aston Martin’s much-vaunted return is among the more interesting talking points of the coming 2021 Formula 1 season. Team boss Lawrence Stroll is on the front foot as the Silverstone team once again morphs into a new era, this time bringing a hue of green back for Sebastian Vettel and Stroll’s lad to compete at the top level.

Stroll senior has made several references to Aston Martin’s Formula 1 heritage in presenting his his racing case. But unlike its brilliant sportscar racing history, Aston Martin rarely mentioned its first F1 foray in its many dispatches over the 60 odd years since it left the sport.

And for good reason too. Aston’s first F1 project was an unqualified disaster…

Following notable successes in sportscar racing, the all-new DBR4 single-seater was intended to carry the David Brown Racing Department’s success over into Formula 1. Aston Martin had considered a Formula 1 program as early as 1955. A prototype was built and Reg Parnell sent to race it in Australian and New Zealand races early in ’56. That Tasman experiment proved a success and it was decided to press on with the F1 project.

Designed by Ted Cutting the new F1 machine was based on Aston’s 1956 DB1 sports racer and developed alongside the DB3S sportscar. Its spaceframe chassis was skinned in an aluminium body with ancillaries tighter packed into the single-seater body. It had double wishbone suspension with coil springs and telescopic dampers up front and a de Dion tube and torsion bar set-up at the rear. And advanced Girling disc brakes all round.

The DBR4’s twin-overhead camshaft straight-6 engine was borrowed from the sports racer too, but sleeved down from 3.7 to 2.5-litres. It turned the rear wheels via a David Brown gearbox. Aston claimed its sonorous six made 210 kW, well up on Lotus and Cooper’s contemporary Coventry Climax FPF four-pot. 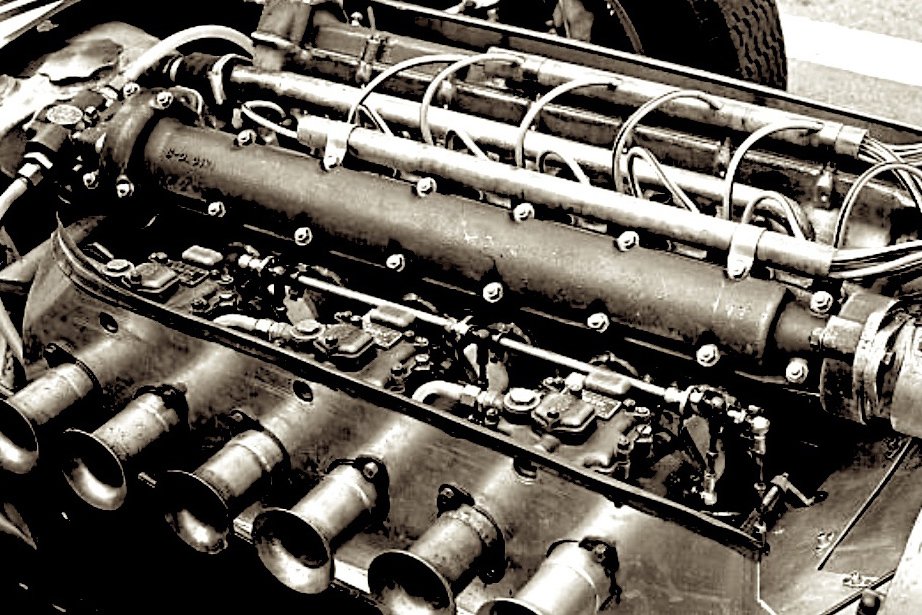 The Aston Martin DBR4/250 was finally unveiled in April 1959 as the team entered a pair of them for Roy Salvadori and Carroll Shelby to drive in the non-Championship Silverstone BRDC International Trophy. Salvadori qualified third behind Stirling Moss’ BRM and Tony Brooks in a Ferrari, with Shelby sixth.

The Ferrari and BRM retired, leaving Salvadori to fight Jack Brabham’s works Cooper-Climax for the win (below). He finished a promising second. Shelby was slowed by a late oil pump failure to place sixth.

So, buoyed by a positive first run, there was much anticipation ahead of the Aston Martin’s DBR4’s actual 1959 Dutch Grand Prix World Championship debut. That weekend would however bring the David Brown team straight back down to earth. 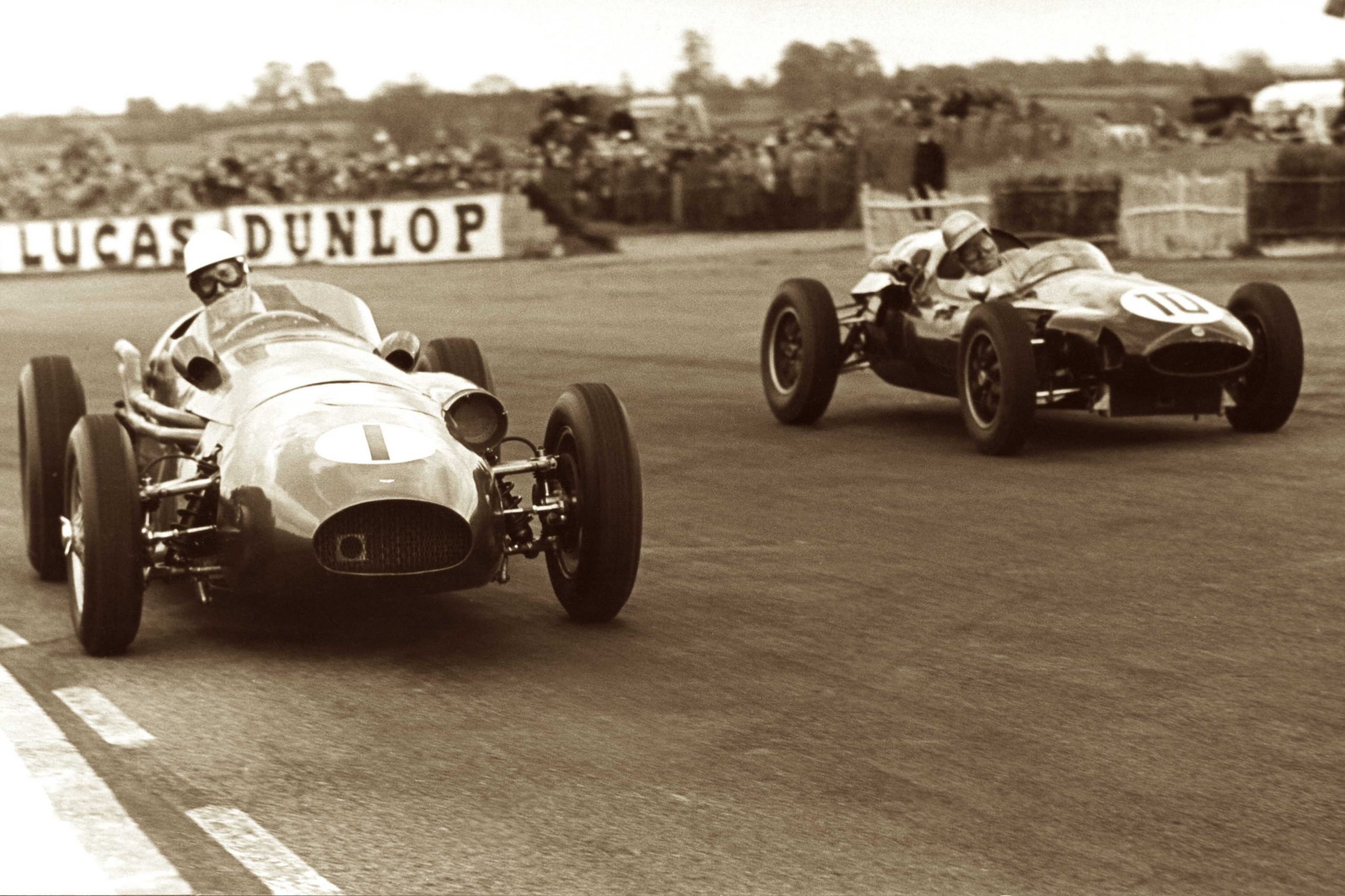 Shelby qualified a disappointing tenth, Salvadori 13th and both cars soon ran into engine troubles as both drivers took early showers. On the back foot and challenged by its sportscar priorities, Aston Martin only turned up at three more races that year. Worse still, the DBR4s failed to score a single championship point with Salvadori’s two sixth places at the British and Portuguese Grands Prix being the team’s best results.

Aston Martin had good reason for the team’ lack of Formula 1 attention that year though. Not only did Shelby and Salvadori win the Le Mans 24 Hour, but they also took the 1959 World Sportscar Championship aboard the F1 car’s non-identical DBR3S sports racing twin.

The DBR4’s debut performance flattered to deceive. In spite of its designer’s name, Aston Martin’s first Formula 1 car was anything but cutting edge. Although sleek, the DBR4’s generous proportions and challenged aerodynamics — an art still in its infancy in the mid-1950s — soon become apparent. It was heavy too and its F1 rivals had already progressed to fully independent suspension by the time it was finally ready to race. 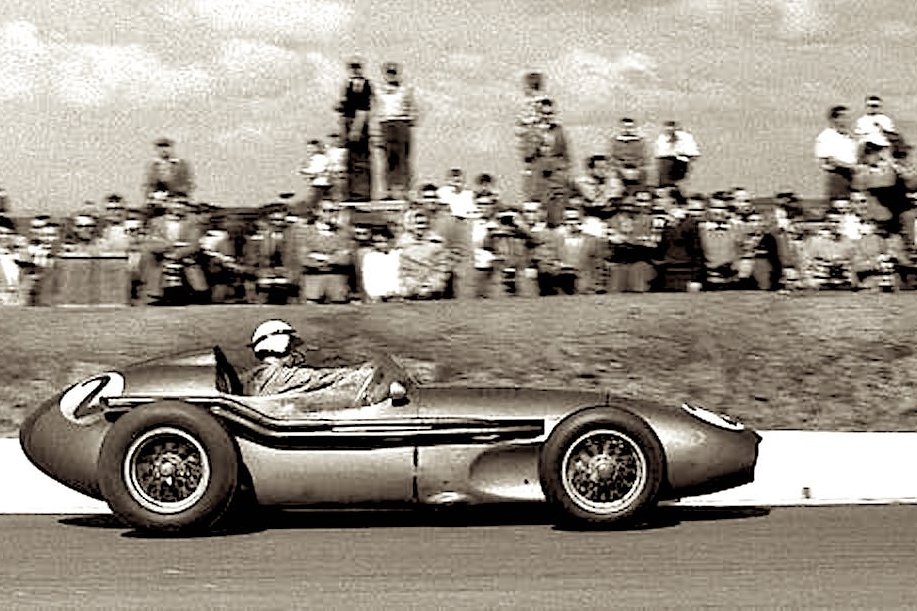 The F1 Aston’s severely de-sleeved sports race car engine weighed appreciably more than any of its rivals did and the lump proved hard-pressed to cope with the car’s heft and poor aerodynamics when driven in anger. Frequent engine failures blighted progress.

Faced with the first car’s failure, the David Brown Race Shop rushed to rework the DBR4 into the DBR5 (below) for 1960. Smaller, lighter and more powerful, it also had all-independent suspension. But it was a case of too little, too late. There wasn’t even a false dawn to cheer the team on as Salvadori’s engine broke early as Maurice Trintignant struggled to tenth in the BRDC International Trophy.

Only Salvadori appeared in practice for the 1960 Dutch Grand Prix in a DBR4 as the DBR5 was not ready. And then a row over starting money saw the team pack up and leave before the start. Rendering the DBR5 a complete white elephant as it would never even race in a grand prix. 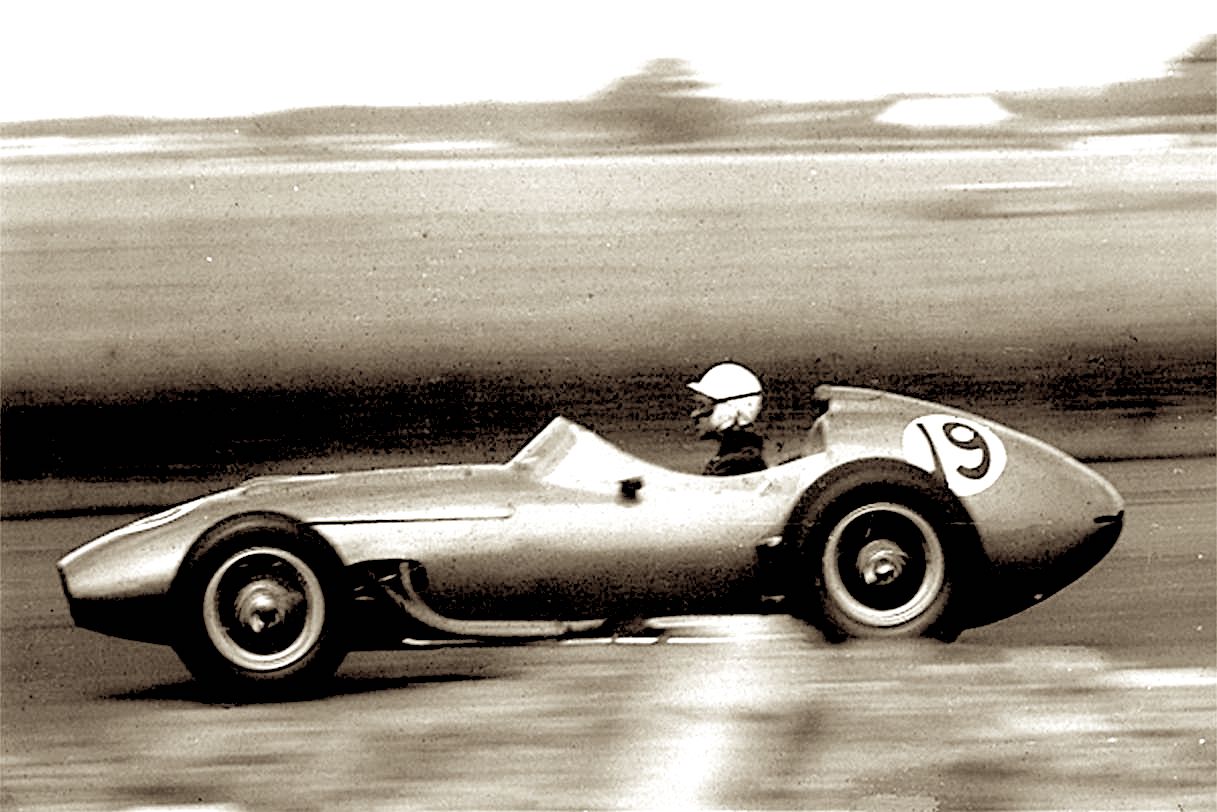 An old chassis designated DBR4/300 due to it being fitted with a 3-litre straight six, was shipped to Australasia for Lex Davison and Bib Stillwell to race in the local series. Its increased engine capacity seemed to make a difference as Davison raced to second in the 1960 Australian Grand Prix. hat chassis chassis raced regularly down under for a few years.

All in all, Aston Martin’s first Formula 1 foray was not something to write home about. But the second coming may well be very different. Likely to be based on the all-conquering Mercedes F1 machine as its Racing Point predecessor was, rather than an old sports racer, the new car should be competitive. As Vettel seeks to redeem himself and young Stroll is out to prove he’s more than just a lucky boy.

And everyone at Aston Martin will probably all be praying that this time around, history does not repeat…