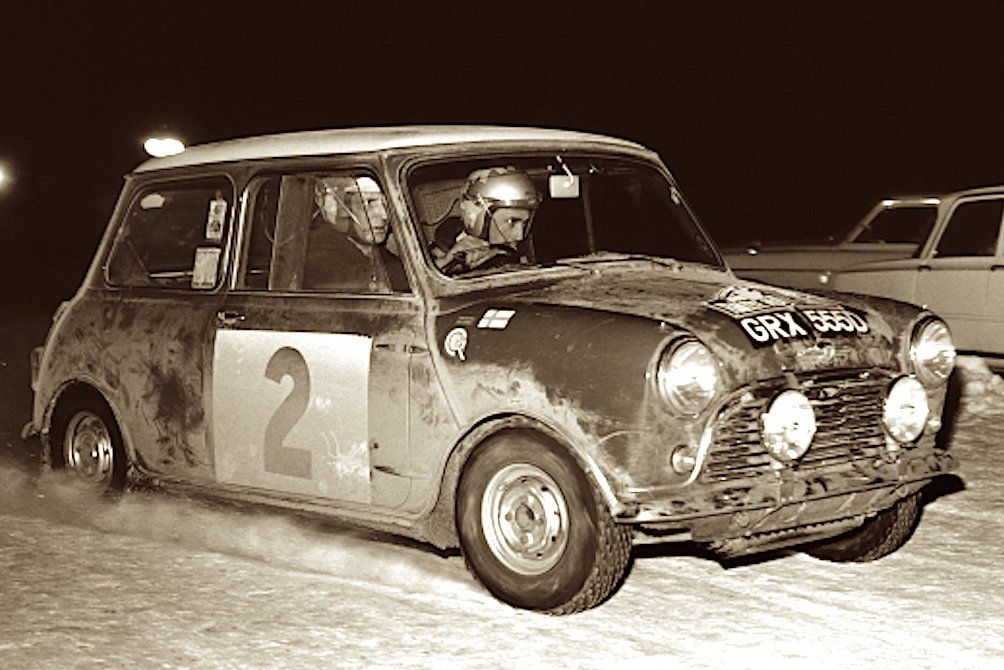 Something ugly was up, down Automobile Club de Monaco way 55 years ago today

International rallying has a proud heritage that stretches far further back than the arrival of the World Rally Championship this week in 1973. In fact the Monte Carlo Rally that kicked the WRC off, goes back to 110 years ago this week. But today will be remembered as one of the less savoury in the history of the stage sport, as the 89th edition actually comes under starter’s orders this evening.

Looking back at the Monte over the years on this day, Sebastien Loeb took the 2007 rally in a Citroen C4 WRC six years after Tommi Makinen won in a Mitsubishi Lancer Evo 6.5. Before that, Carlos Sainz won aboard a Toyota Corolla WRC in ’98 and Bruno Saby took the ’88 win in a Lancia Delta HF. Scratching a little further back, you will find that Paddy Hopkirk and Henry Liddon took a famous Monte victory in their Mini Cooper S in 1964 (below). 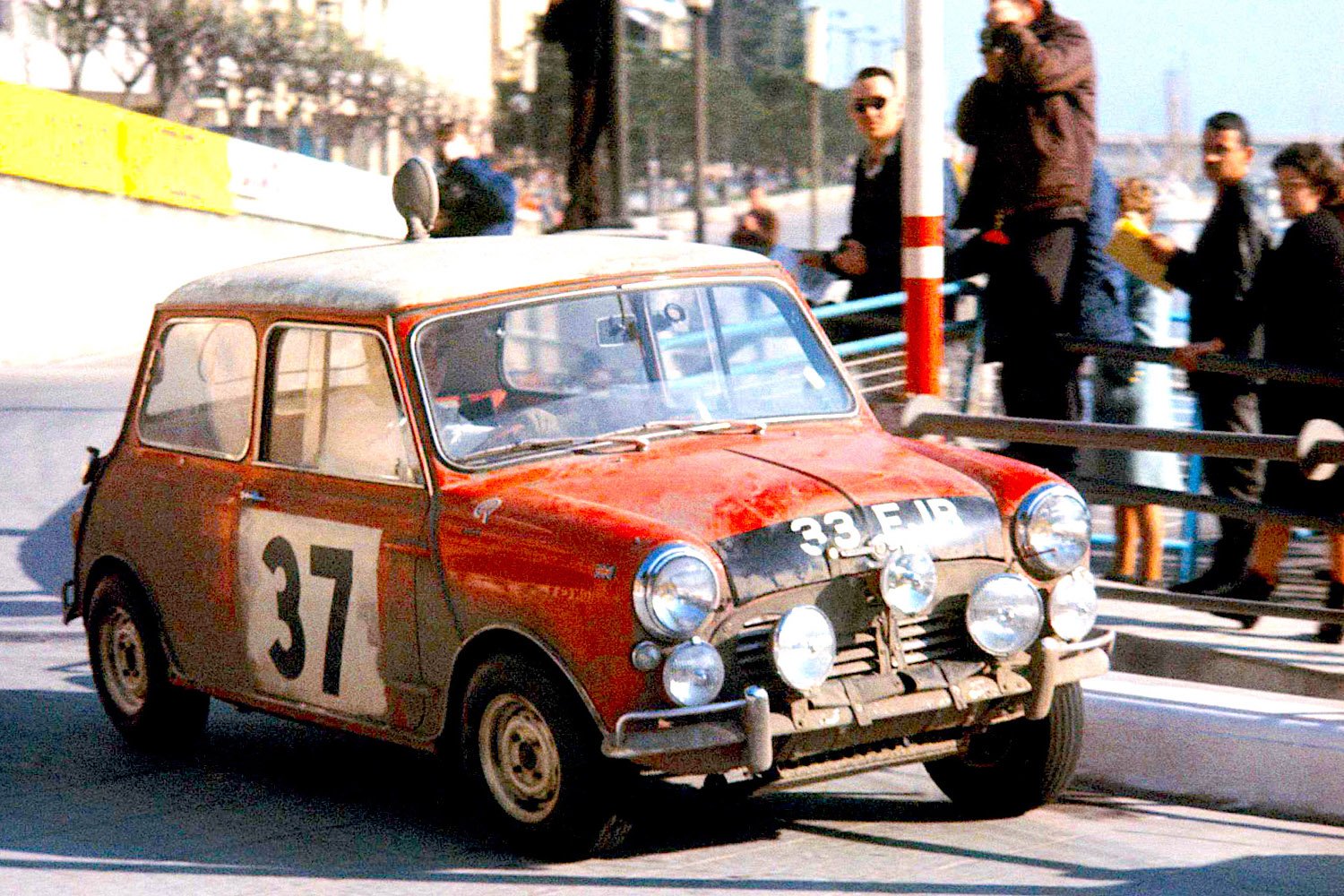 The Minis won again in ’65 and they were on their way to a hat trick in 1966 (below). But there were dark forces at play and what went down today 55 years ago, will go down as the sport’s less spectacular moments…

Rallying was becoming increasingly professional in the ‘60s when Stuart Turner was appointed as Competition Manager at BMC. He arrived just as the all-new the Mini joined a multi-talented his stable at the British giant’s racing department. Turner soon signed Paddy Hopkirk, Rauno Aaltonen and Timo Mäkinen as drivers and as noted, Hopkirk set the rally world aflutter when he and Liddon took a totally unexpected Monte victory today in 1964.

Mäkinen did the double the following year (below) and the team looked set to pull off an incredible hat-trick in ’66. But that chatter from the Med suggested that the Automobile Club de Monaco wasn’t so keen on the little British cars once again stealing its thunder… 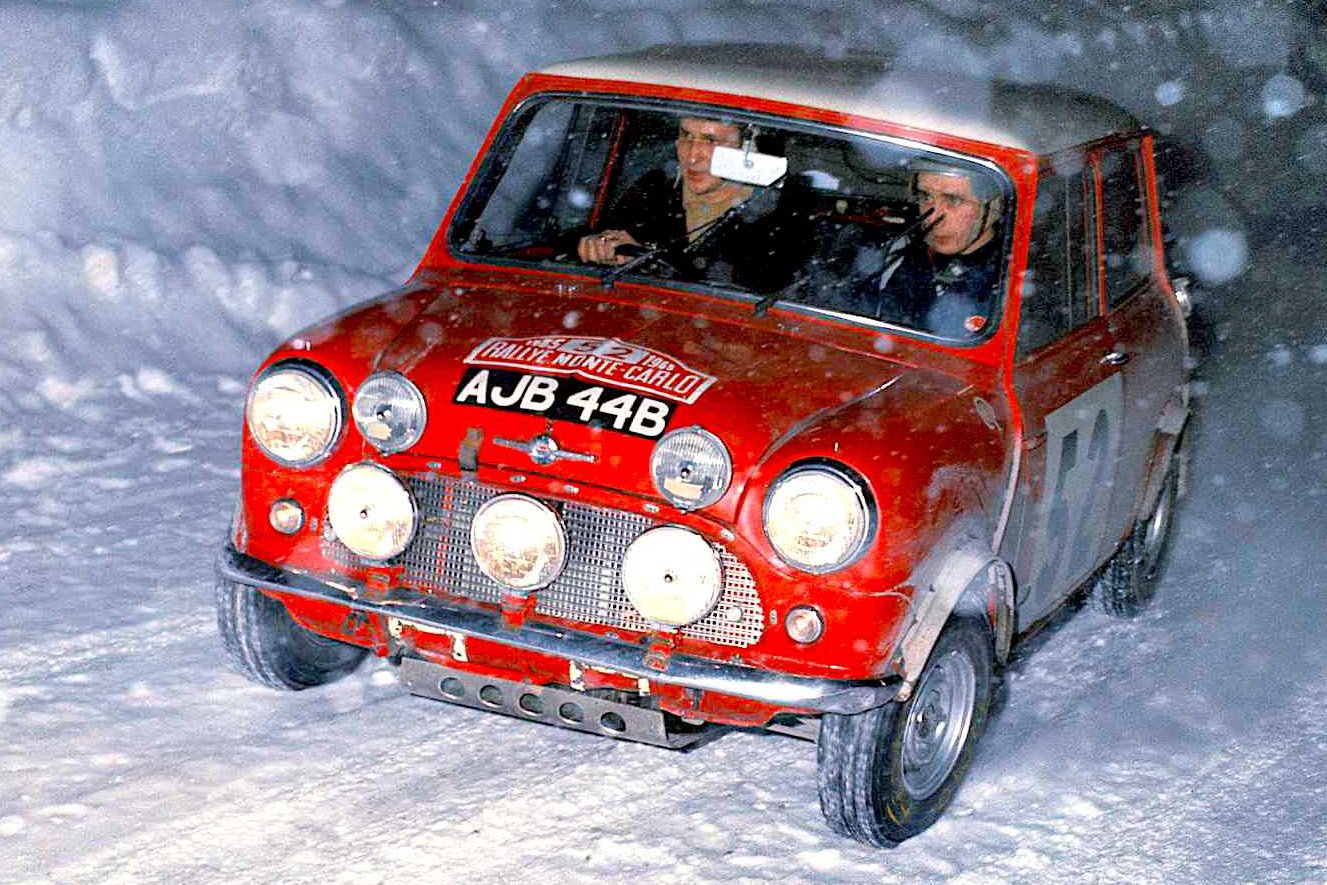 It was also at that time that new standard production Group 1 Appendix J regulations came into play. Those cars benefited their free-to-tune Group 2 rivals carrying an 18% handicap, which basically also made sure that a Group 1 car would win the Monte. That also meant that BMC had to build and sell 5000 identical standard production Cooper Ss before it could compete. Which BMC did and so did Ford, with the new Lotus Cortina.

Group 1 rules called for a car’s engine, wheels and interior, among many other aspects to be standard, but limited modifications were permitted. BMC took every precaution to ensure that its Minis wore built to meet every single of the many Group 1 and rally regulations. It even flew company and Royal Automobile Club representatives to meet the FIA in Paris to go over every last detail and ensure that there could not be any misunderstanding. 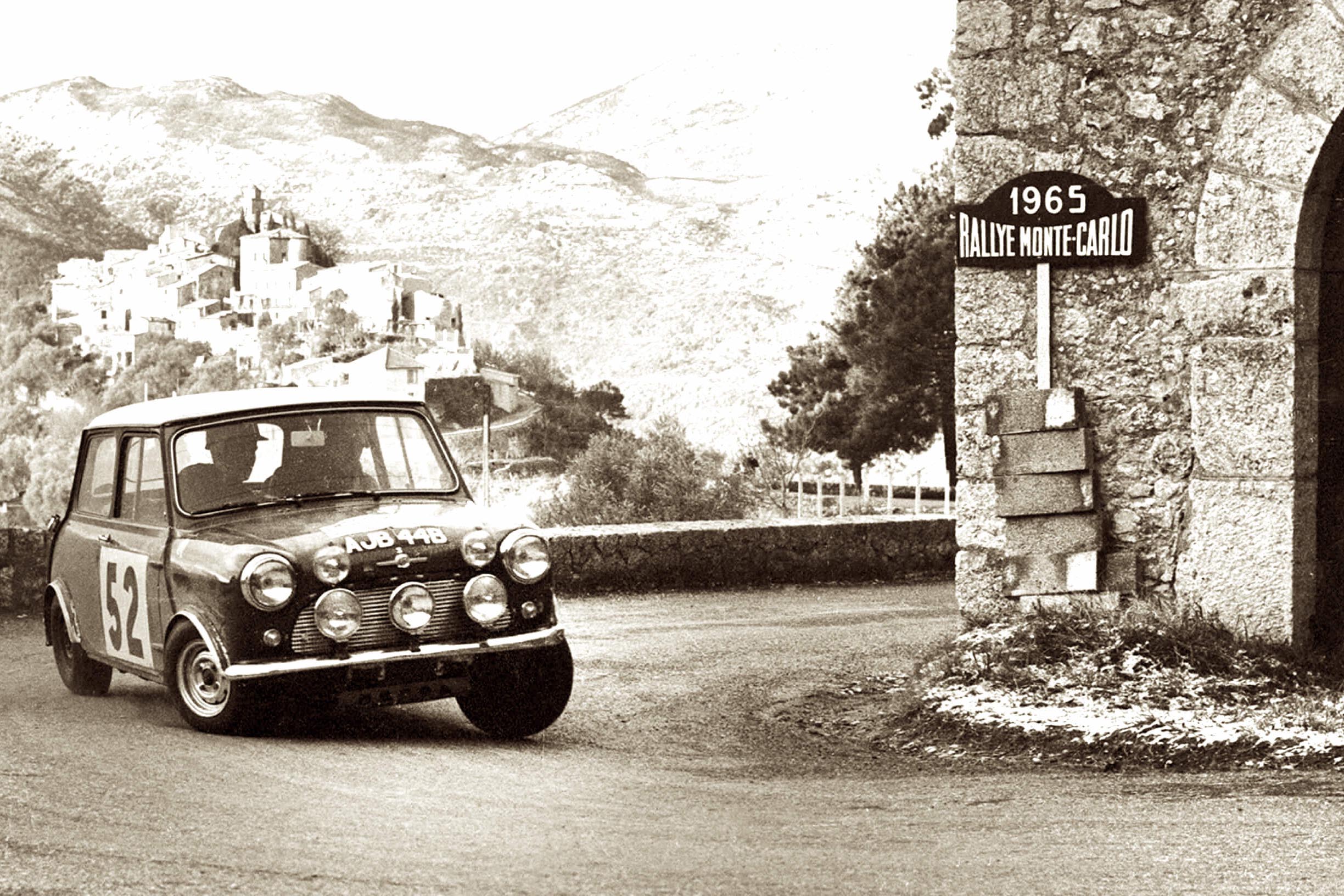 And so, the 1966 Rally Monte Carlo started. Crews descended from several starting points and arrived in Monaco for the real action. By the time all was said and done was done, Mäkinen led an incredible Mini hat-trick 1-2-3 clean sweep home ahead of Aaltonen and Hopkirk. And just to rub salt in to Continental wounds, Roger Clark took fourth in a Lotus Cortina and Rosemary Smith the Ladies Cup in her Hillman Imp.

But wait! The fat lady had not yet sung. Controversy had already flared up when when British Group 2 privateers were disqualified before the competitive section even started on reaching France. They had too many head and spotlights on their cars. The Group 1 cars including the Minis, were however allowed to proceed.

The Minis were fitted with iodine-vapour single-filament bulbs instead of the regular production car double-filament dipping bulbs. The works rally cars dipped their headlamps by switching to the spotlights (below).

Stepping back to the new Group 1 rules, the first draft of Appendix J allowed freedom on the number and type of lights on the cars. But a second draft removed the free lighting concession. Somehow however, the organisers, Auto Club Monaco and all the French competitors were aware of the second draft. But neither the British teams nor the Royal Automobile Club were aware of the change, come the London satellite start scrutineering. 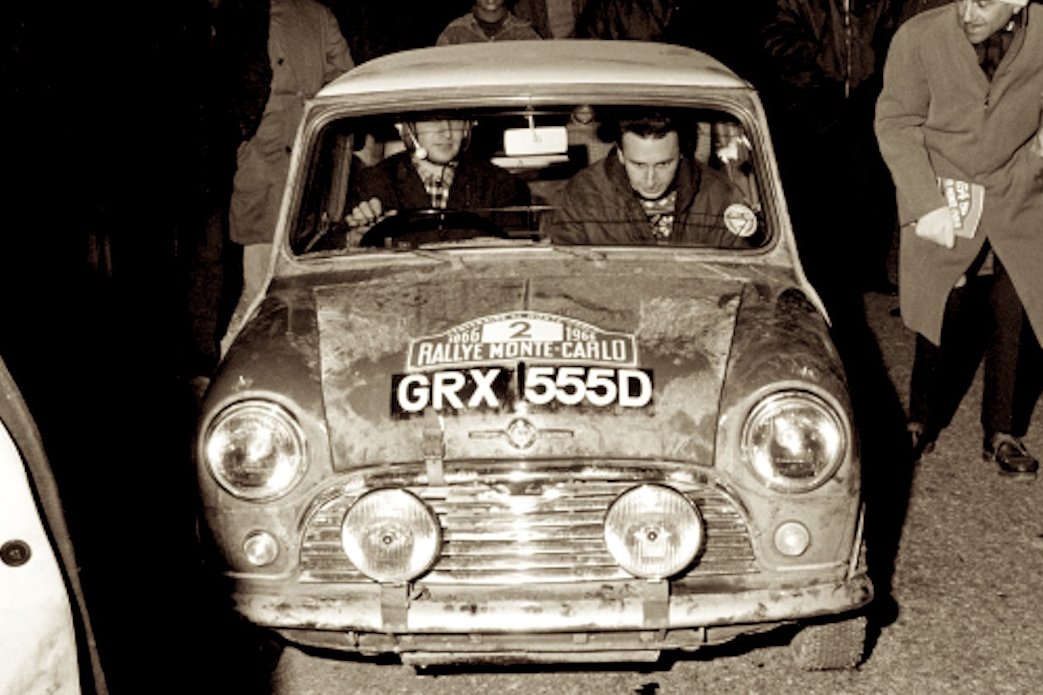 Shortly after the finish, ACM officials impounded and stripped the Minis, initially ignoring the headlamps.“They counted all the teeth on the gears in the gearbox and they took the tyres off and weighed the wheels and tyres separately,” Paddy Hopkirk admitted in a BBC TV interview. “It was ridiculous – they couldn’t find anything wrong.”

Eighteen hours later, the ACO disqualified the Minis, Clark’s Lotus Cortina and Smith’s Imp for the very lighting infringement that officials had known about — and sent crews packing for — three days earlier. “It was technically illegal,” Hopkirk conceded. “But it did not help us to win the rally. Of course that’s given the Mini ten times as much publicity as if we’d won the rally, because the whole world is saying, ‘The French are at it again’.”

And surprise, surprise — the ACM declared a Citroën had won its 1966 rally. Vivre le France! Its driver, Pauli Toivonen was however and clearly disgusted at the state of affairs and his hollow victory. Turner and Aaltonen went on to make it clear that they felt the entire fiasco had nothing at all to do with Citroën. 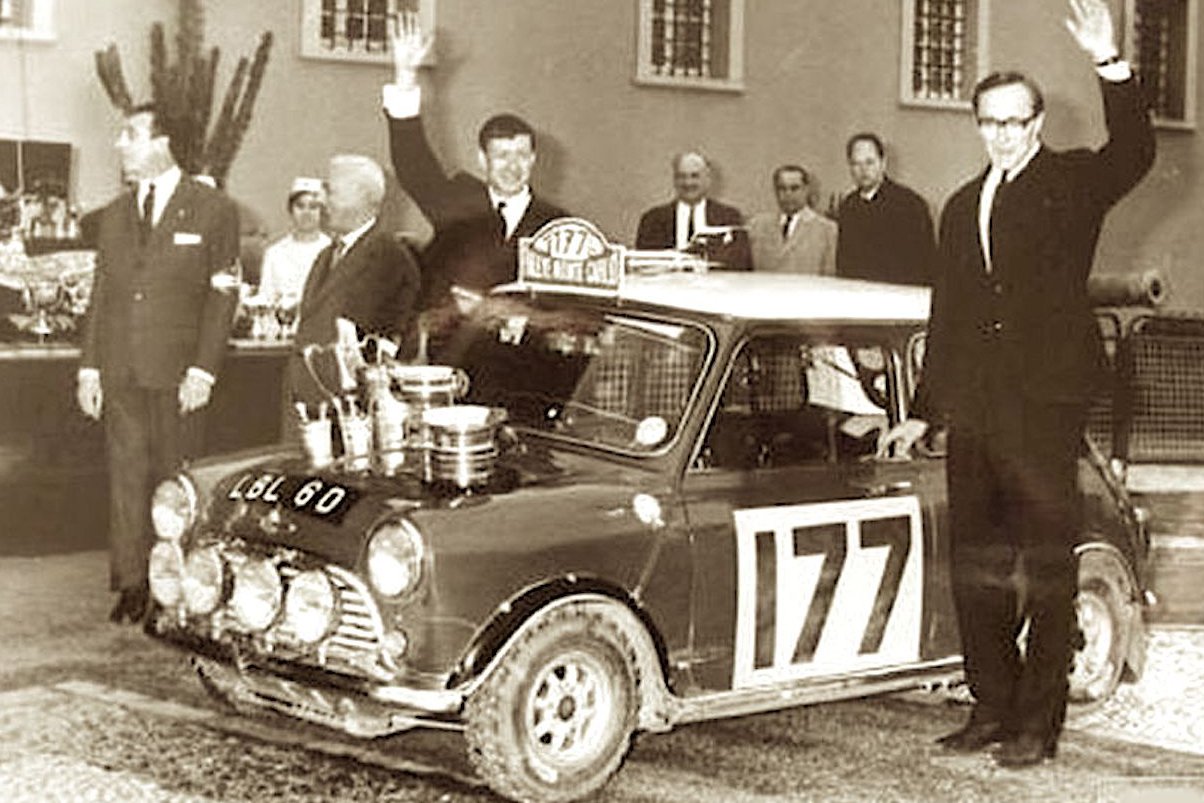 And instead of complaining, they came back the following year and under the huge glare of international interest, Aaltonen, Liddon and their little Mini Cooper S quite simply blew the opposition to the weeds (above).

It will forever remain a mystery how it came to be that the entire British contingent failed to receive that second draft of regulations banning multiple headlights. Or why the Group 1 entries were allowed to continue, while others were not. But as even Ayrton Senna would one day discover, Gallic rules are often written and read in a manner that étrangers will never understand.

The history books may argue, but in spirit, the magical little Minis really won four Monte Carlo Rallies on the trot. It’s just that grumpy little grey men so often find reason to alter events to suit their own little egos…