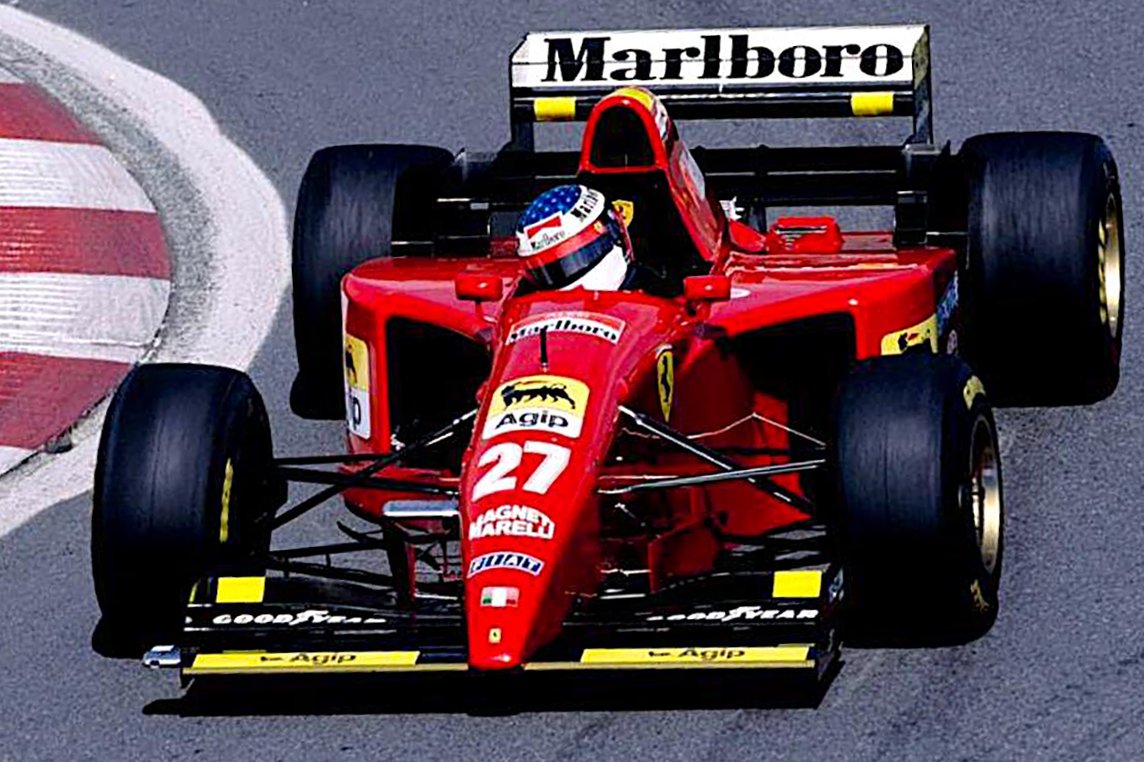 Ferrari has made no bones of the young Giuliano driving one of its Formula 1 cars this week, thirty years after his team veteran dad Jean first turned laps testing for the great Maranello team.

But who is Jean Alesi? And what set him apart? Perhaps a touch too passionate, exciting and aggressive a driver, Jean was particularly talented in the wet. He may have only won a single race in Canada in 1995, but his career proved challenged by Jean consistently finding himself in the right place at the wrong time.

Born to Sicilian parents in Vaucluse in Avignon, France, Jean grew up around his family’s body shop and was soon influenced by rally driver and hill climber dad Franco’s amateur racing antics. Alesi took up karting at 16 before moving on to race in the French Renault 5 Turbo championship, and on to Formula 3, where he won the 1987 French title. 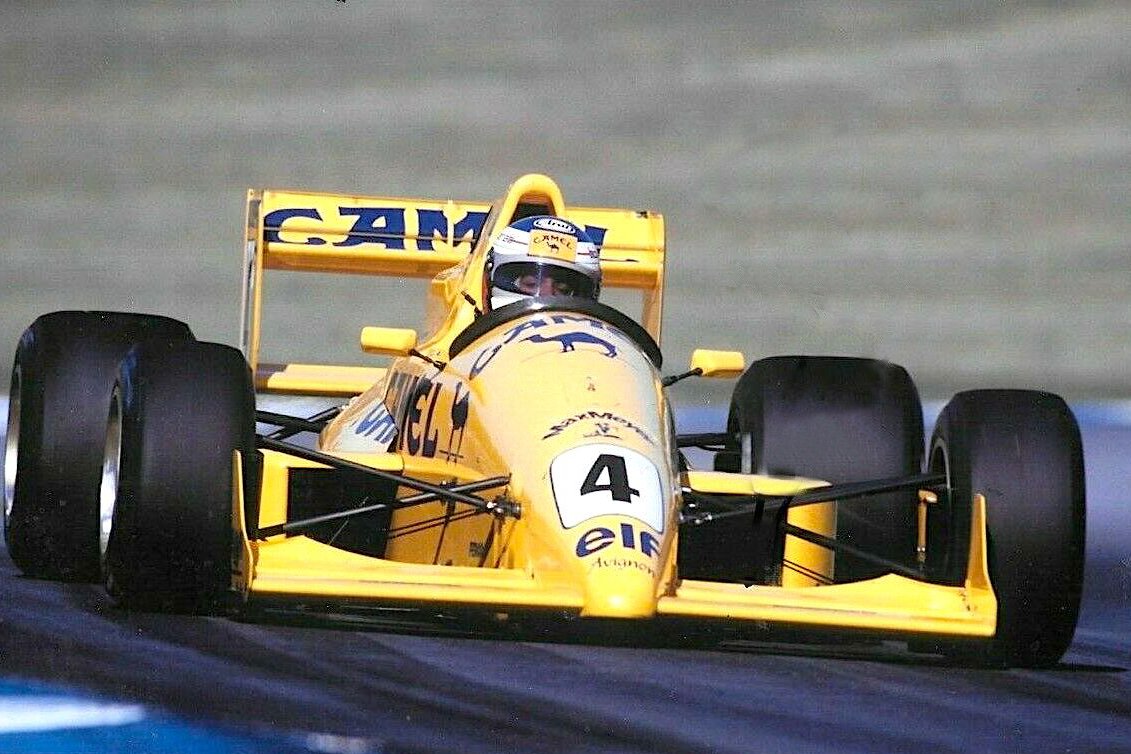 That opened the door to Alesi finding a Formula 3000 drive with Oreca in 1988. He took a couple of podiums en route to tenth in the championship before joining Eddie the Jordan Formula 3000 team the following year (above).

He tied with Érik Comas tied on points, but took the 1989 Formula 3000 — in essence the old F2 title on a count-back of wins. His three trumped Comas’ two. During that season, where Alesi also raced in the Le Mans 24 Hour, he was for once in the right place at the right time when unsponsored Ken Tyrrell signed a deal with Camel that clashed with Michele Alboreto’s rival cigarette brand Marlboro backing. Alboreto left and Alesi was drafted in.

Sensationally Alesi found his way up to second in his Grand Prix debut at home in France (below) and brought the Tyrell home a magnificent fourth, prompting Tyrrell to offer him an 18-month contract. Alesi dovetailed his Tyrrell duties with his Formula 3000 commitments with Johnny Herbert taking the Tyrrell wheel when Alesi’s Formula 3000 races clashed. Jean went on to score points twice more in his rookie outings in Spain and at Monza. 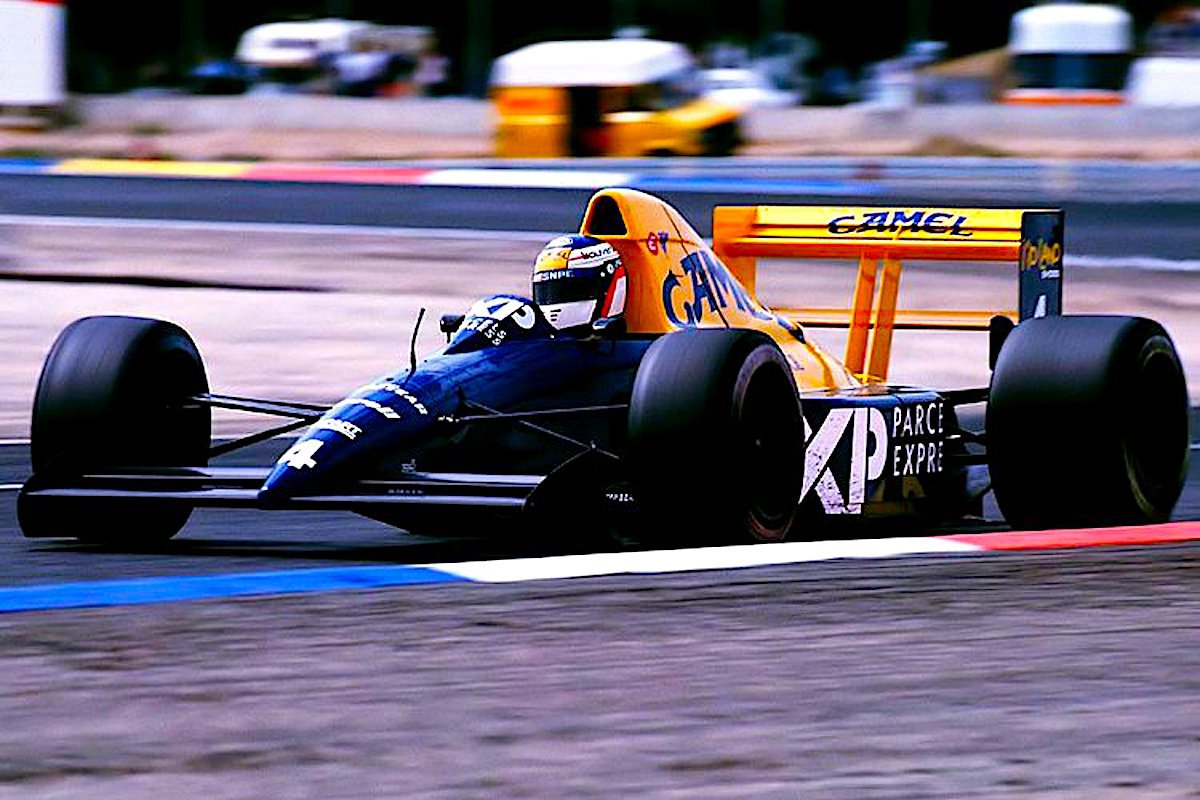 Not only did Alesi fend off mighty pressure from Ayrton Senna’s works Honda V10 powered McLaren, but he also had the cheek to re-pass Senna after the World Champion initially passed the Tyrrell for the lead!

Alesi added a couple more second places at the other street venues that brought the best out of the Tyrrell, before qualifying his under-powered steed fifth at Monza. He then passed Alain Prost’s Ferrari for third before going off while chasing Gerhard Berger’s McLaren down for second. Soon, Tyrrell, Williams and Ferrari all claimed to have secured Jean’s services for the following season. 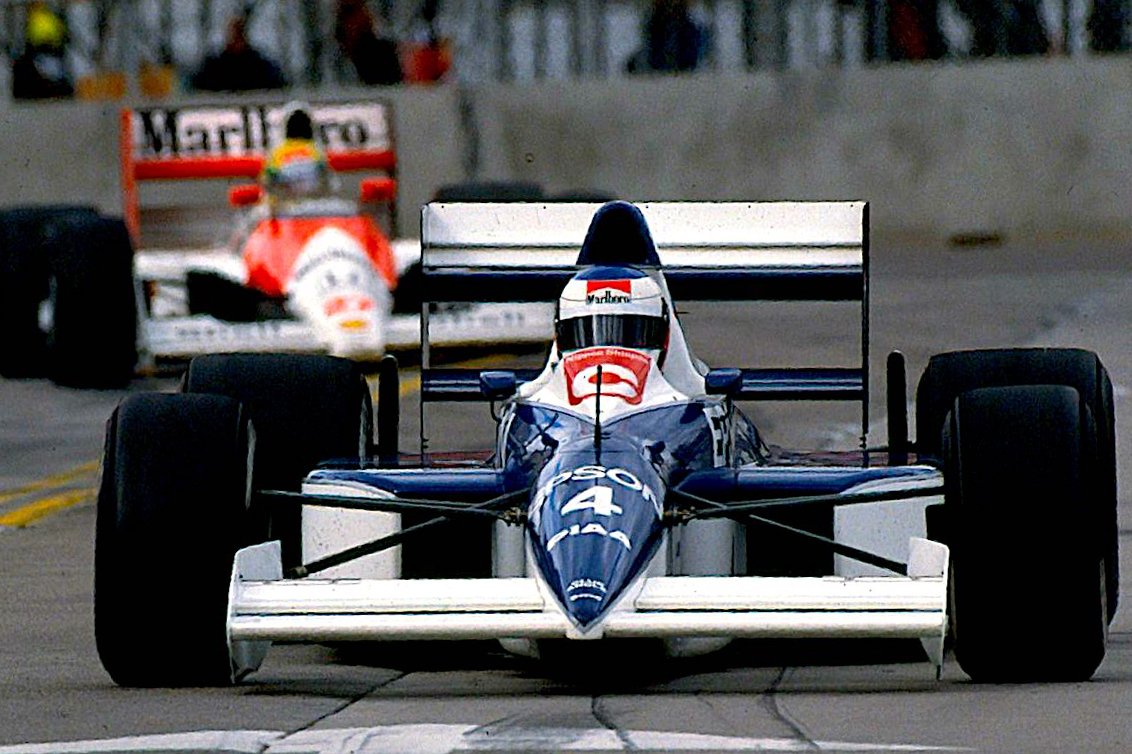 He even signed a contract with Williams for ’91, but then opted to join Ferrari alongside Prost. Alesi was valuable enough for Maranello to pay Williams four million dollars to release him. Prost and Mansell had been a strong championship threat at Ferrari the previous year and the Italian team had, as McLaren’s Ron Dennis so succinctly put it, won the Winter World Championship. What could possibly go wrong?

That proved to be Alesi’s first wrong move at the wrong time. Indeed he delivered a trio of podium thirds at Monaco, Germany and Portugal, along with a series of top six finishes, but his Ferrari failed him nine times, including another failure while leading in Belgium (below). He scored 21 points and finished seventh in the championship.

Riccardo Patrese, who took Alesi’s deserted Williams seat, meanwhile finished third behind Senna and Williams teammate Mansell in the championship. At the same time, Ferrari fired Prost for labelling his car a ’truck’ after the Japanese Grand Prix. 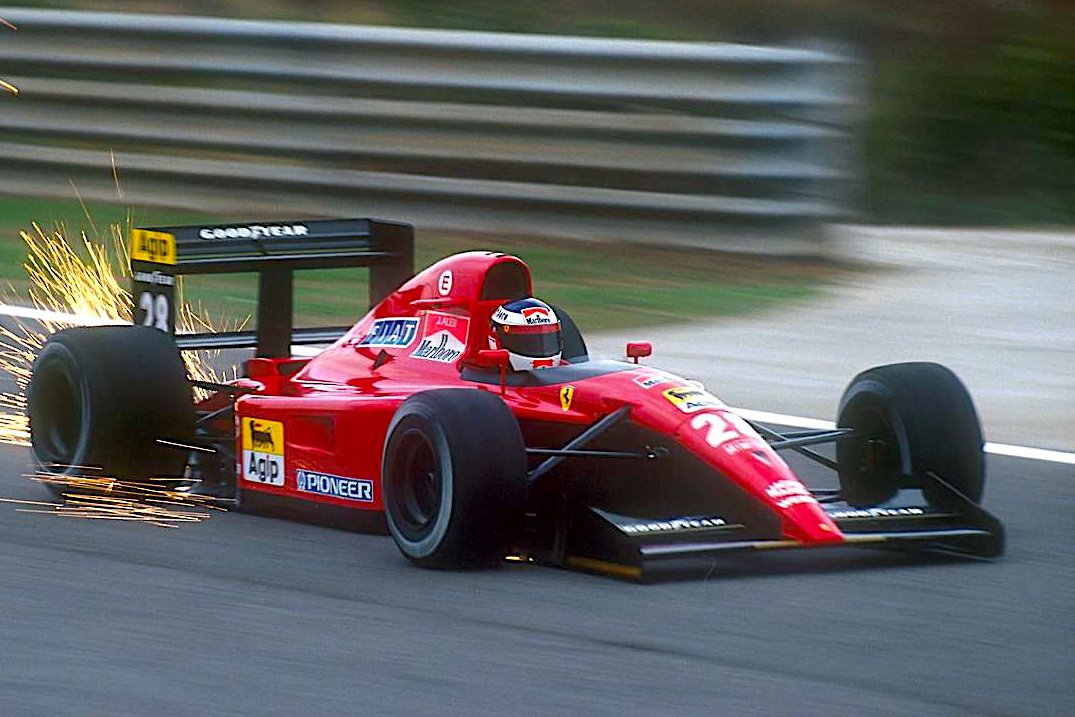 So Alesi became Ferrari’s number one for ’92, but if the previous year’s car was a truck, Aleasi must have bitten his tongue about the recalcitrant F92A. A couple of thirds were the best he could muster in the early season, but that Alesi magic was back at his damp home grand prix in France. Jean turned in lap times on slicks that were comparable Nigel Mansell’s wet Williams pace, before retiring with another engine failure.

Ferrari handed Jean an ‘improved’ F92AT later that season and he qualified a fine third at Monza, but retired early in the the race after fuel pump failure. He squeezed out a couple of points finishes in the final two races to scrape an unlikely seventh in the championship on 18 points.

It was a dark time at Maranello — Alesi’s teammate Ivan Capelli endured an even more disastrous season and was replaced by Nicola Larini later on. Williams, which Alesi had spurned two years earlier delivered a dominant championship 1-2 as Mansell led Patrese home. 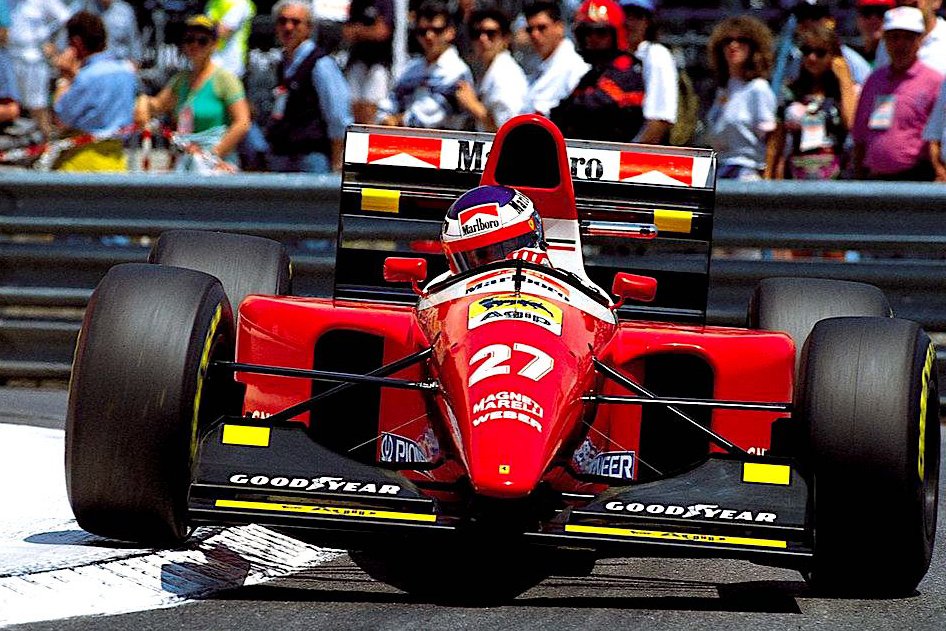 Gerhard Berger then returned to Ferrari for ’93, but the pre-season was fraught as the team struggled to come to terms with the temperamental new F93A’s active suspension. Four retirements followed in the first five races of the season that mustered just a pointless eighth in Brazil. Jean was at his wit’s end but then he shone as always at Monaco (above) and that third place finish led to him signing a further two-year contract with Ferrari.

Monaco was however a flash in the pan as the retirements, pointless results and a Hungary collision that almost came to blows with Christian Fittipaldi once again had the enigmatic French-Sicilian down in the dumps. The Ferrari however improved towards the end of the season as Alesi ended second at Monza, led early on in Portugal and fought back to sixth in the championship with 16 points.

The ’94 Ferrari proved competitive but unreliable as Berger entrenched himself as the team leader. Jean was third in the season opener, but he hurt his back in a Mugello test shunt and was substituted by Nicola Larini at the Pacific and San Marino Grands Prix. He bounced back with fifth at Monaco and followed that up with third in Canada and then second at Silverstone after Schumacher was disqualified. 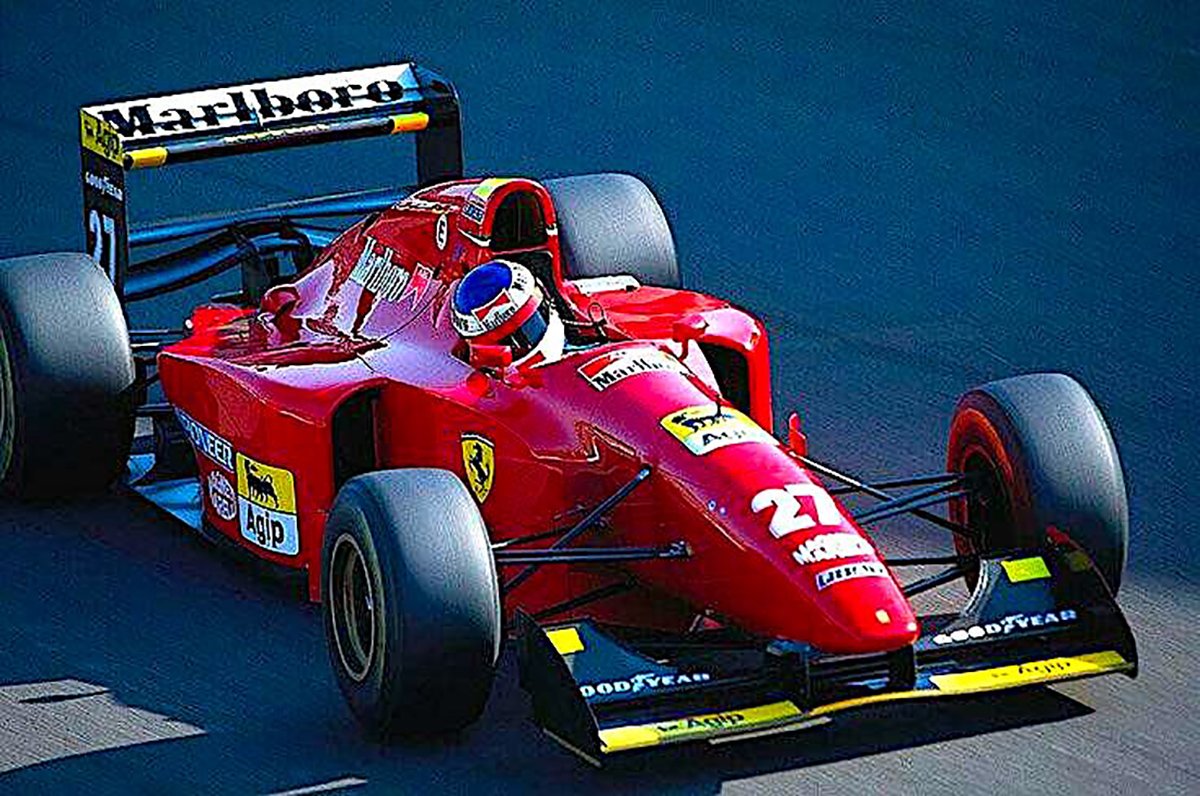 Those strong results were peppered with retirements and reliability woes in between, but Alesi scored his maiden F1 pole at Monza (above). He thrilled the tifosi to lead until his gearbox failed in the pit lane at his first pit stop. He managed a third in Japan and sixth at Australia to wind up fifth in the championship with 24 points.

1995 started better for Alesi at Ferrari with fifth at Brazil and a couple of secodns at Buenos Aires and Imola. But he also twice retired from second with an engine failure in Spain and after a shunt at Monaco when he had nowhere to go when Martin Brundle crashed the Ligier ahead of him.

Many of his races a Ferrari may have been wholly forgettable, but Jean Alesi will always remember the race on his 31st birthday. That was the day he won his first and only Grand Prix in Canada (top) despite the Ferrari running out of fuel on the slow-down lap and Jean hitching a ride home with Michael Schumacher (below). 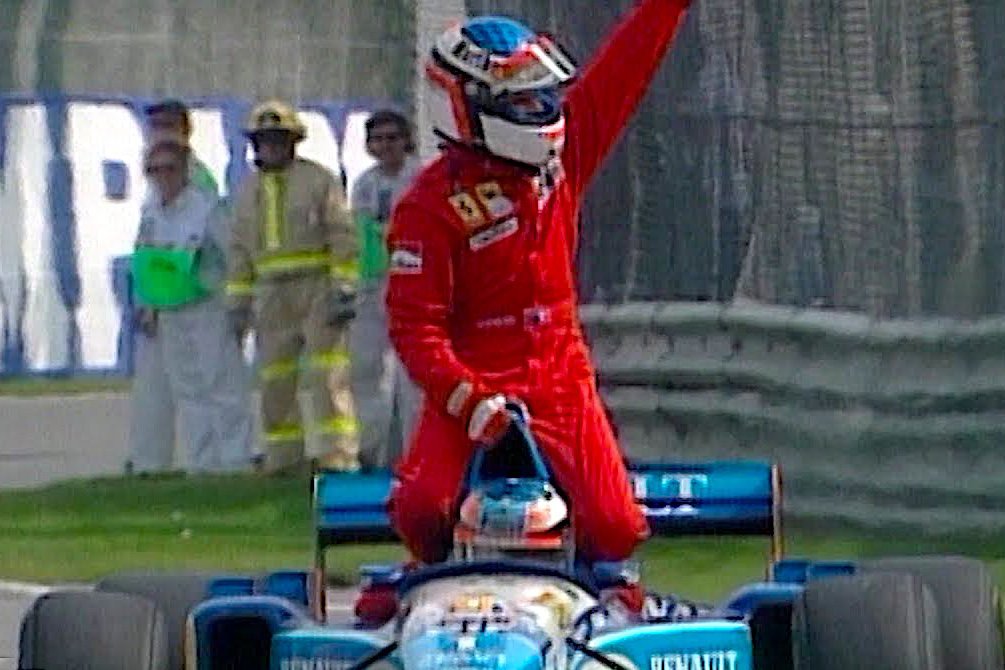 He finished second at the British Grand Prix, but then suffered four consecutive retirements, twice from the lead at Spa and at Monza. And then the Ferrari’s pace gradually left it, as the season wore on. Worse still was that Jean soon learned of Michael Schumacher’s impending arrival at Maranello, before a heated argument with team boss Jean Todt after refusing to obey team orders to allow Berger, behind him in the points, to pass in Portugal.

Alesi then led for most of the way at the European Grand Prix on slick tyres in damp conditions only to be passed by Michael Schumacher two laps from the end after Jean was hindered by low fuel and lapped traffic getting in the way. He delivered another wet weather comeback only to suffer late retirement in Japan, before crashing into Michael Schumacher who was due to replace him in his final race for Ferrari in Australia.

Alesi’s Ferrari years were over — he and Berger not content to be Michael’s number 2, swapped places with Schumacher at champions Benetton. But that team would soon slump as Byrne, Brawn and others slowly but surely all jumped ship to follow Schumacher to Ferrari. The team dropped down the grid as the season progressed, but Jean soldiered on to a beast ever fourth in the drivers’ championship on 47 points. 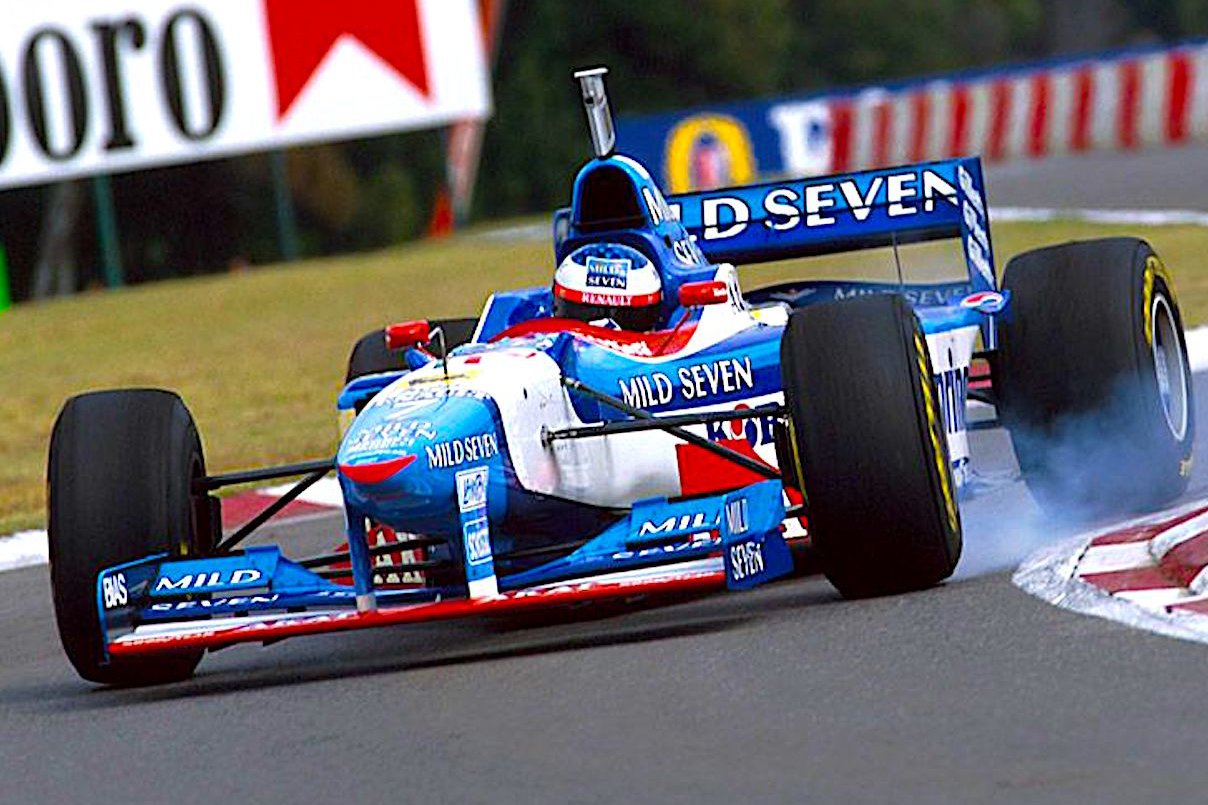 There was further regression at Benetton as the brain drain continued apace to Ferrari into 1997. Jean then ignored calls to pit and ran out of fuel in the Australian season opener before lean pickings early in the season. He fought back though and was soon third in the title race (above), but two dubious contretemps with Coulthard and Irvine raised eyebrows. All was forgotten as he put it on pole and led at Monza until a slow stop cost him the win.

He soldiered on to fourth in the ‘97 championship with 36 points as Jean left Benetton an inked a two-year deal with Sauber Ferrari for ’98. A variety of results over those two seasons culminated in his final podium behind the Jordans at a soaking Spa (below). At the end of his Sauber tenure, Jean was mooted as the departing Irvine’s replacement at Ferrari for 2000.

Instead he opted to join Alain Prost’s new former Ligier team as Rubens Barrichello went to Ferrari to complete the dream team that would go on to utterly dominate the next five F1 seasons. 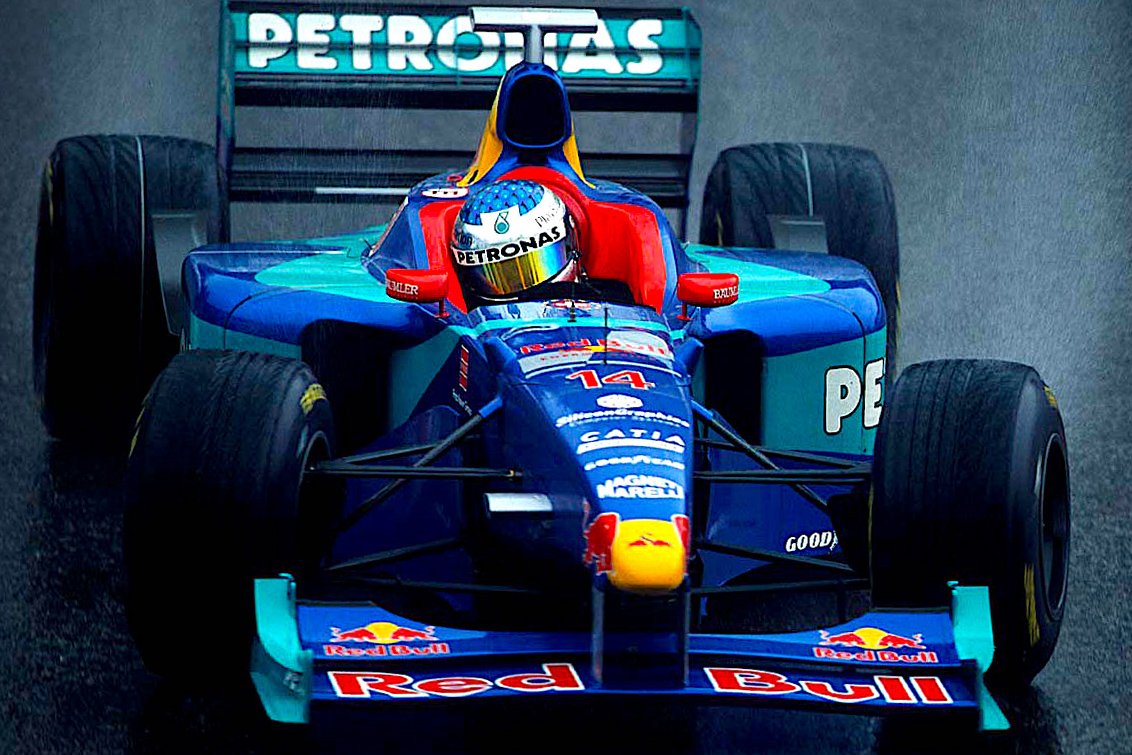 Alesi failed to score a single point for the first time in his career that season. But Prost’s car was reliable in 2001 (below) and Jean finished every race he started in it that year and even found points at Monaco, Montreal and in Germany. He however walked away from Prost after the German race, swapping places with Heinz-Harald Frentzen who had been sacked at Jordan.

So Jean ended his F1 career with five races for the team that saw him into the top level (bottom). He scored his final F1 points in Belgium and made his 200th start in the US. He was offered a drive with Arrows, but declined and retired rather than face another season in a minnow team, choosing to rather to work on F1 tyre development with McLaren. 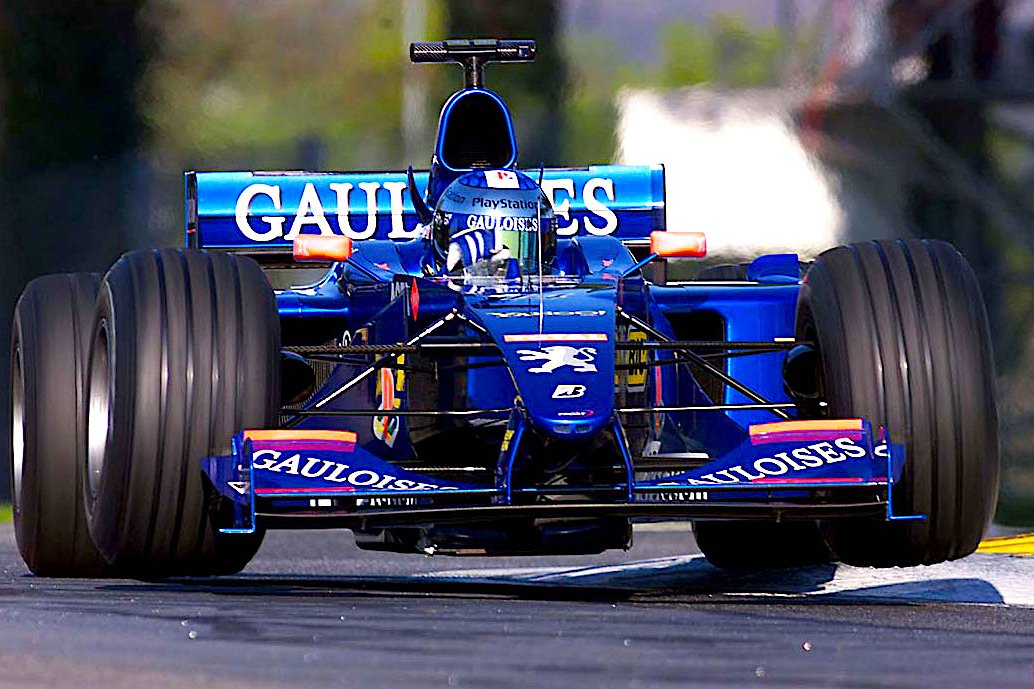 Five seasons followed for Mercedes in the DTM where he won several races, before taking up F1 ambassadorial roles with Lotus and Pirelli and sporadic drives in GT racing, at Le Mans and a failed shot at the Indy 500.

Today Jean Alesi hangs out with his wife, Japanese pop star Kumiko Goto at his Avignon vignerons, where he has become a self confessed wine junkie. Except on race weekends where you will find Jean in the back of one of his four children, son Guiliano’s Formula 2 pit. Giuliano has now had a chance in an F1 Ferrari too. Whether he impresses the Ferrari Driver’s Academy enough to warrant a future Formula 1 seat, remains to be seen. 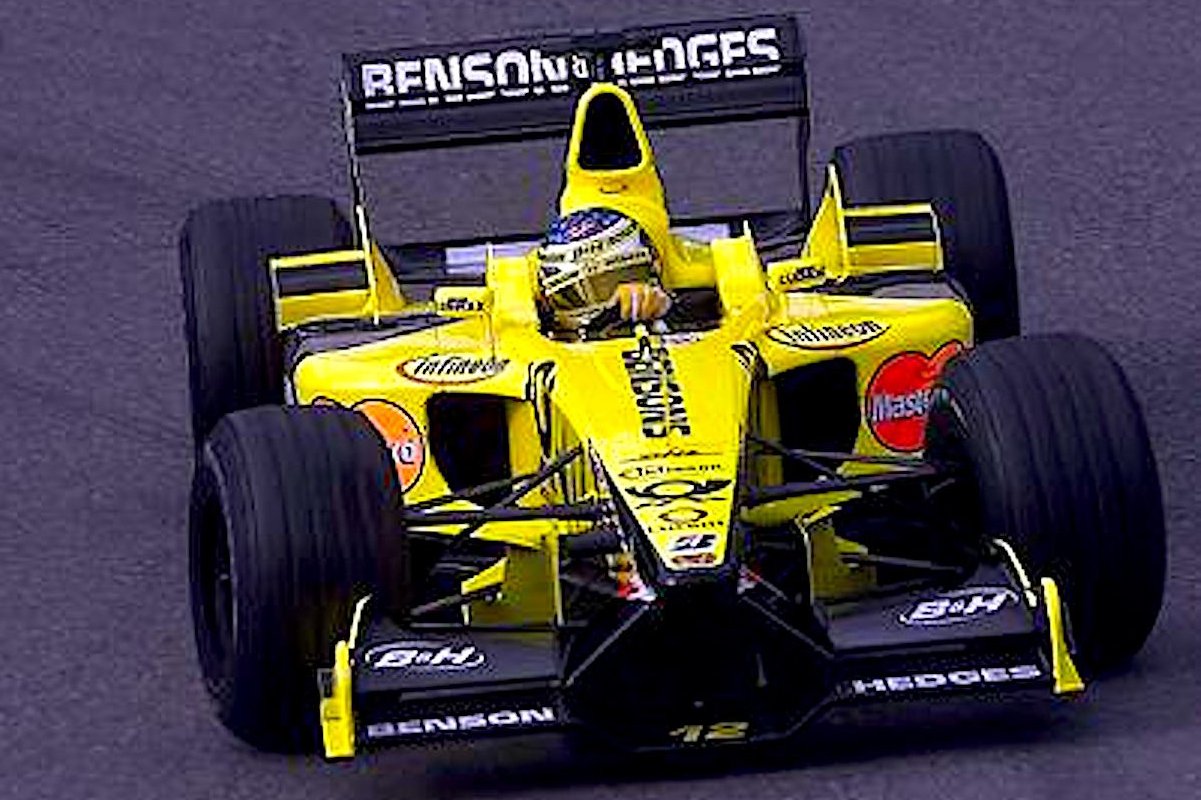 Dad Jean is however one of those drivers, that after reding this, like me you will wonder, ‘hell, did he only win one grand prix?’

Yes, he really was that good a driver. If only Jean Alesi had been as good at makeing career decisions as well has he drove those cars. It surely was simply a case of being at all the right places. At the wrong time, every time.