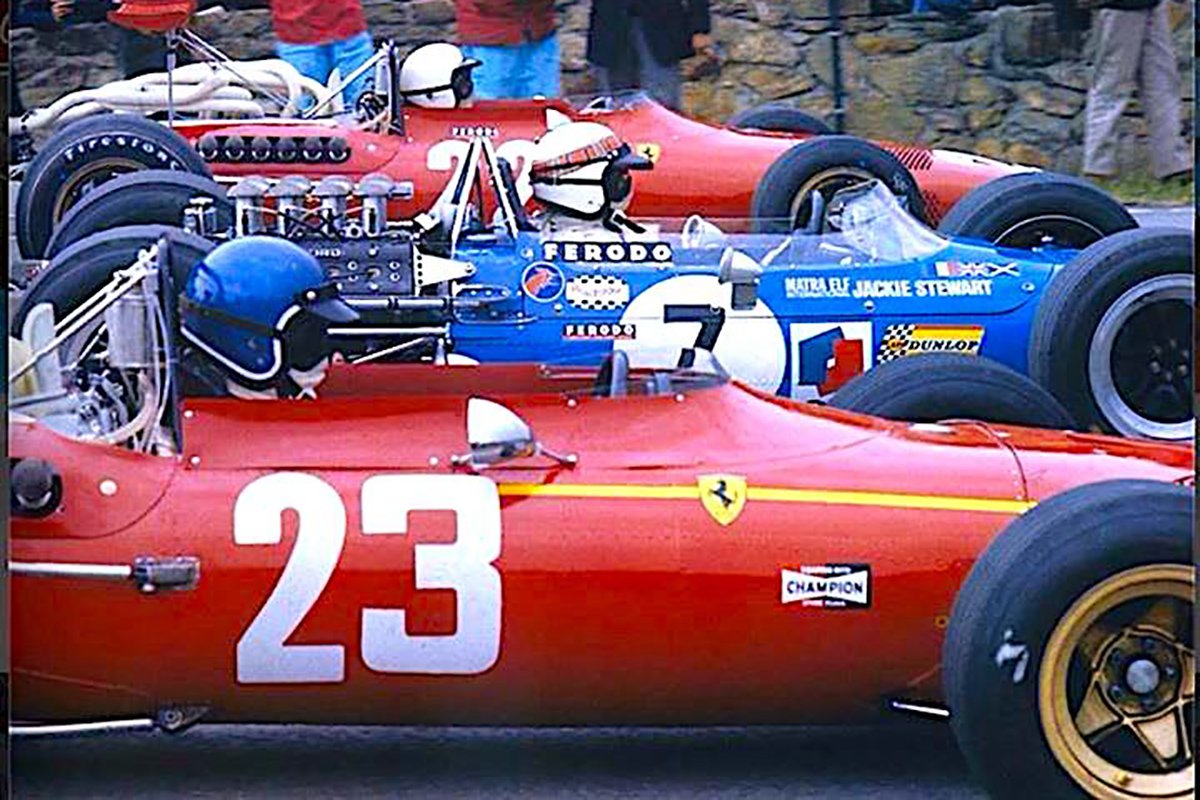 Leclerc and Sainz are Ferrari’s youngest driver line-up since Amon and Ickx. We look back 53 years to see what went down at Ferrari in ’68

Someone mentioned that Ferrari’s 2021 Formula 1 driver line-up is its youngest since 1968. At 23, Charles Leclerc was born on 16 October 1997 and 26-year old Carlos Sainz Junior on 1 September 1994. Which will basically make their combined age a square 50, should the 2021 season actually start at Bahrain on 28 March.

Not to let the facts interfere with a good story, Andrea de Adamich, who out-qualified both his Ferrari teammates at Kyalami was like Sainz will be in Bahrain, twenty-six and a quarter that day at Kyalami. But he was fired after Kyalami and Ferrari ran Ickx and Amon in its 312/68s for the rest of season. 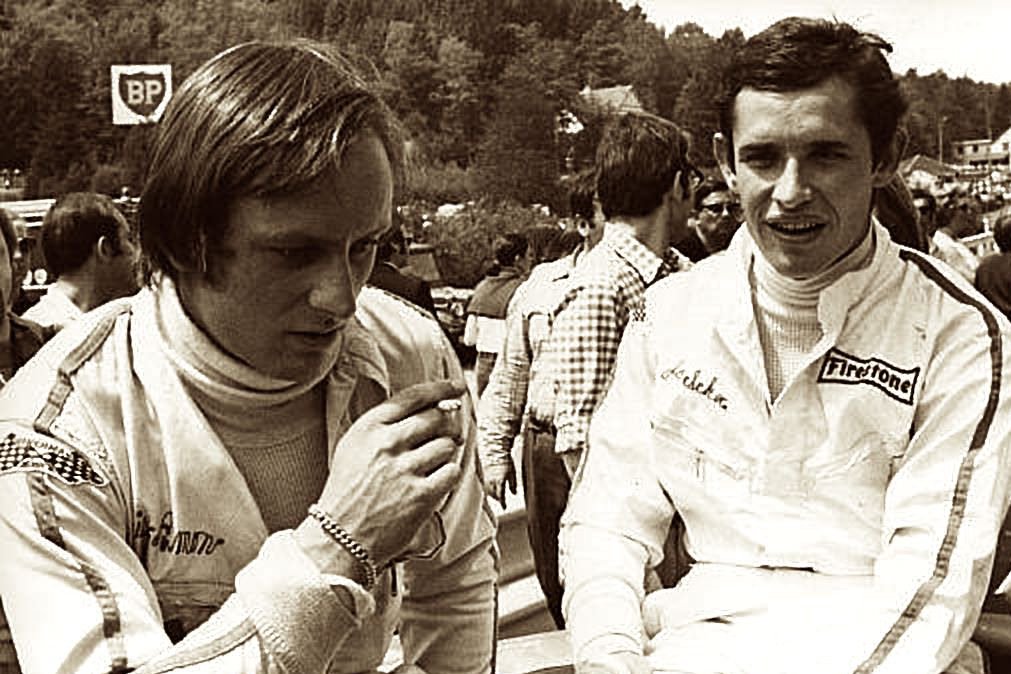 So let’s give it to them — Ickx and Amon (above) were a combined total of 47 years five months and a couple of days old in their first race of ’68 — a fair bit younger than even this year’s relatively wet behind the ears line-up. All of which makes it worth our while to look back at ’68 to perhaps get a handle on how 2021 may pan out

Many believed that Enzo Ferrari hiring two young guns to race his latest 3-litre V12, rather than opting for an established star in one of the cars was risky. Ickx and Amon were both brilliant, talented and fast young drivers, but they lacked the experience to take the likes of Graham Hill, Jack Brabham and Jackie Stewart on mano-a-mano. 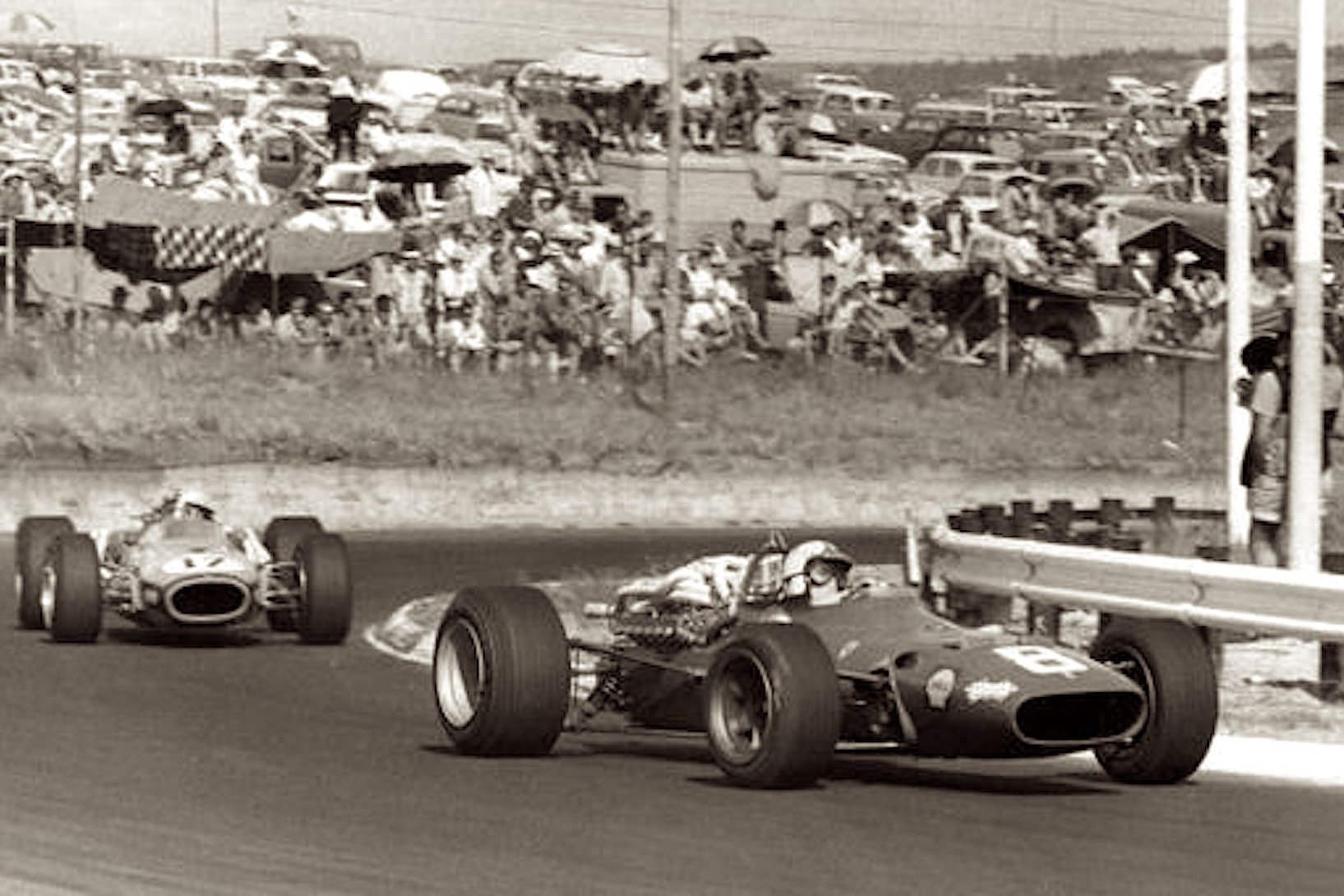 Enzo was however also fighting a financial war at Maranello as Ford hovered ahead of Fiat’s impending ’69 takeover. So trimming the team back to two cars driven by two quick but cheap drivers clearly made a lot of sense. Or lets rather call that saving many millions of lire for the Maranello team.

A quiet, underrated yet talented development driver, de Adamich lined up behind Lotus pair Clark and Hill, Stewart’s Matra, Jochen Rindt, Jack Brabham and Ferrari refugee John Surtees, now in a Honda at Kyalami. He and lckx however retired while Amon (above) went on to finish up fourth. Clearly pressed to run three cars, Ferrari then opted to axe the Italian as he pruned his effort back to two cars.

That left ’68 F1 rookie Ickx and Amon, who had been in F1 since 1964 and the faster of the duo, to carry Ferrari’s can. They went on to share four pole positions between them over the season’s twelve races that yielded a single win, a second and three third places through the year. 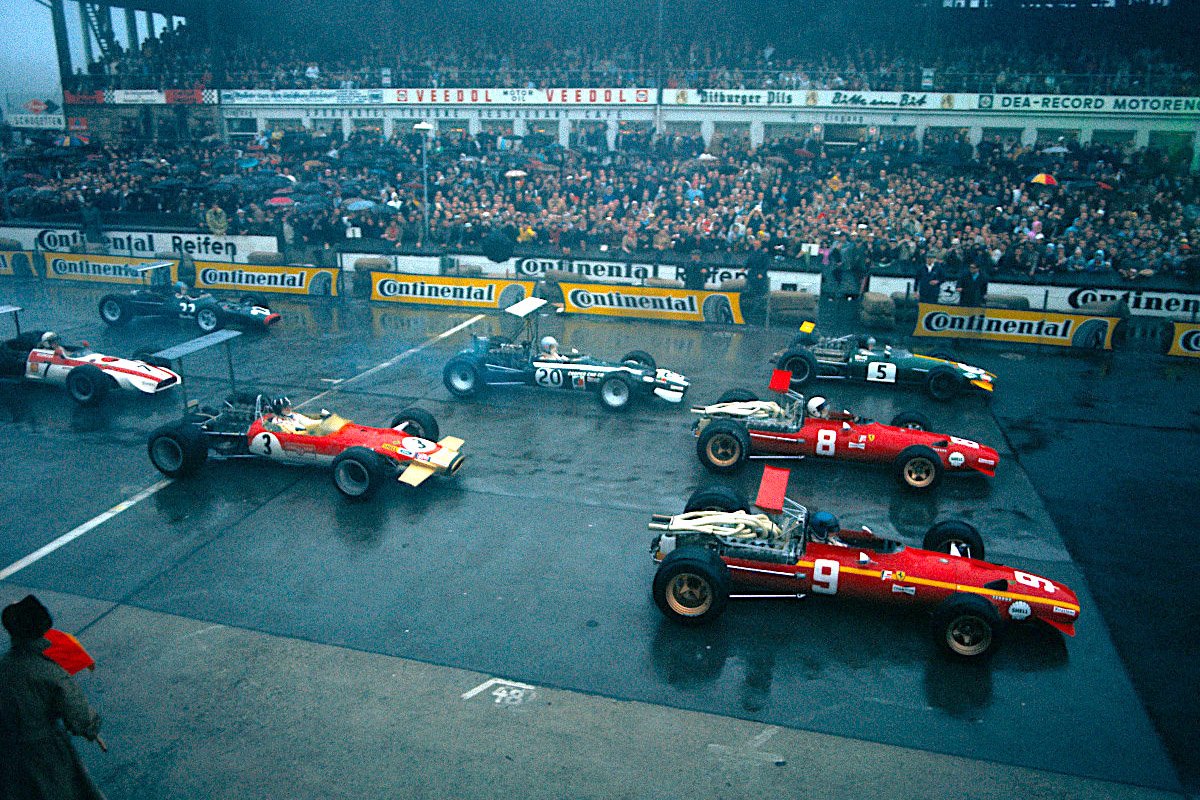 There were a few highlights, not least the soaking wet German Grand Prix at the Nürburgring. Ickx had already established himself as both a rain and the Ringmeister when he put it on pole (above) by — wait for it — ten seconds ahead of Amon around the treacherous 21km Nordscheife. Jochen Rindt’s Brabham Repco was a full 15 seconds back in third.

Unfortunately the Ferraris failed to deliver on that potential in a chaotic race hampered by heavy as another talented young driver, Jackie Steward delivered a mesmerising race win.

Then the Ferrari 312/68 arrived at the Belgian Grand Prix sporting an aerodynamic downforce inducing aerofoil wing— a Formula 1 first. Genius ingegnere Forghieri mounted his revolutionary device midships over the engine and the result proved as astounding as its outer-worldly looks. 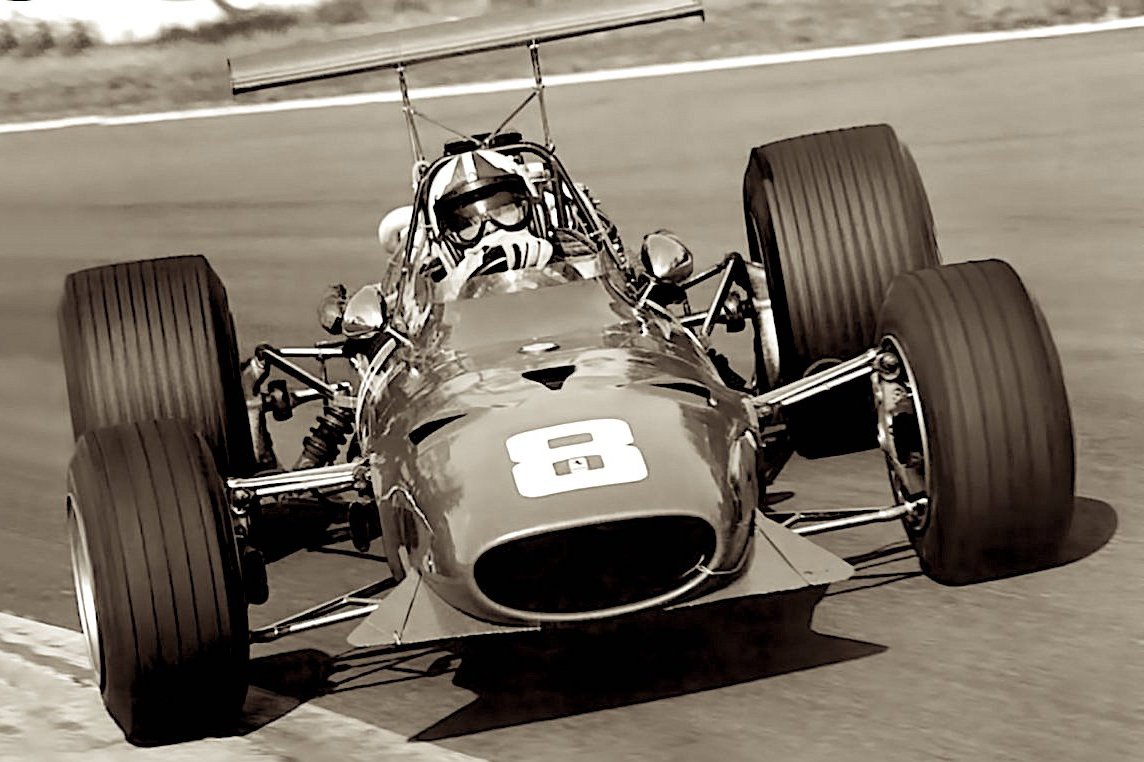 The downforce generated produced so much extra grip in the corners, that Amon took pole by almost four seconds from Stewart’s Matra at Spa that weekend. Sadly Amon (above) retired again while leading when a stone pierced the radiator. Home hero Ickx meanwhile fought a race-long misfire to come home third.

Ickx bounced back to score a spectacular maiden win in the rain at the French Grand Prix at Rouen (below). Jacky was however sidelined when he broke a leg in a sports car crash as Derek Bell was drafted in alongside Amon while the Belgian recuperated.

Reliability, rather than the lack of a senior team leader ultimately proved Ferrari’s 1968 bugbear. The team failed to finish any of the final three races. Some however still suggested that ‘il Grande John’ Surtees’ set-up and development expertise and pure raw pace may have benefited the team and delivered far better results. 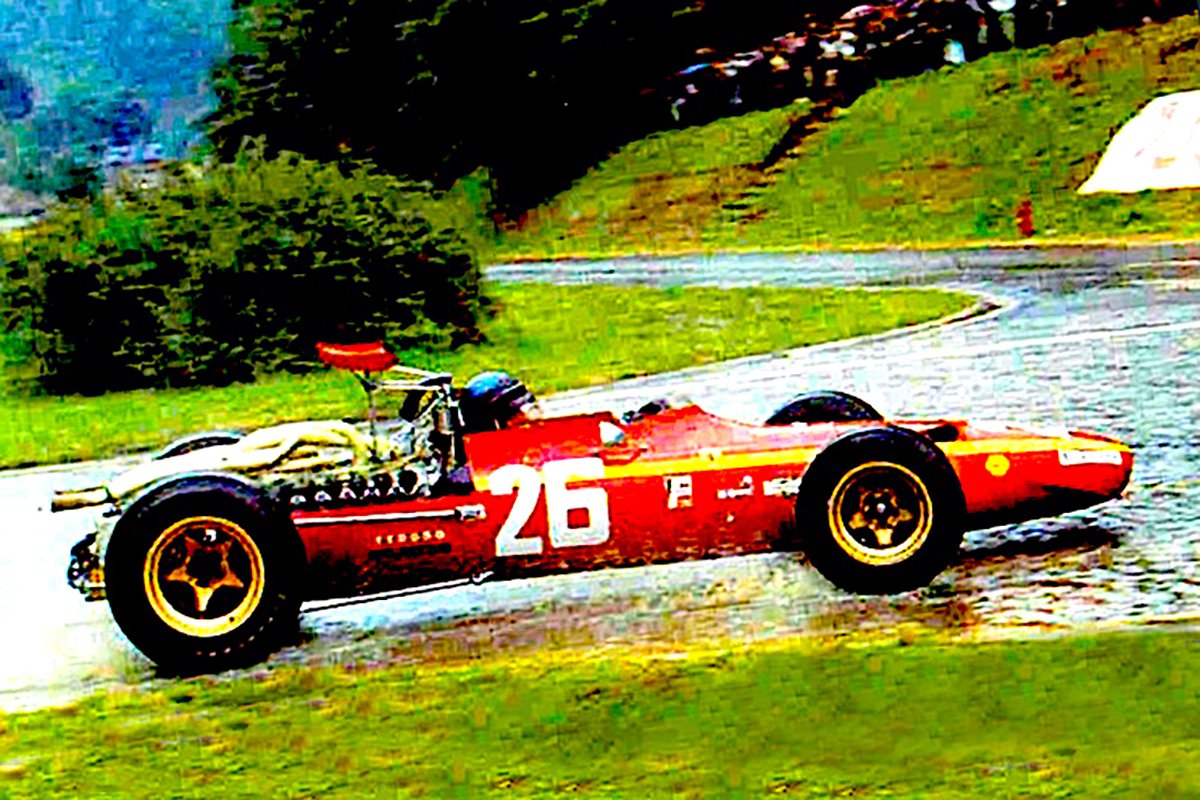 1968 however proved a tragic year as Clark died early in the year and Lotus teammate Spence weeks later at Indy. That left Graham Hill to pick up the pieces to deliver Chapman the title in the Lotus-Cosworth 49.

All of which leaves us to ponder what the youngest Ferrari driver line-up since ’68 can muster in 2021.

There seems to be a subtle spring in Maranello’s step this early in the build up. But were Leclerc and Sainz to deliver the four poles, a race win and a few seconds and thirds that their peers did 53 years ago, it would be a significant improvement over last year’s casino.

Somehow we think the tifosi will be praying for more and considering their drivers’ superior experience in spite of their relative youth, like them we trust those prayers will be answered… 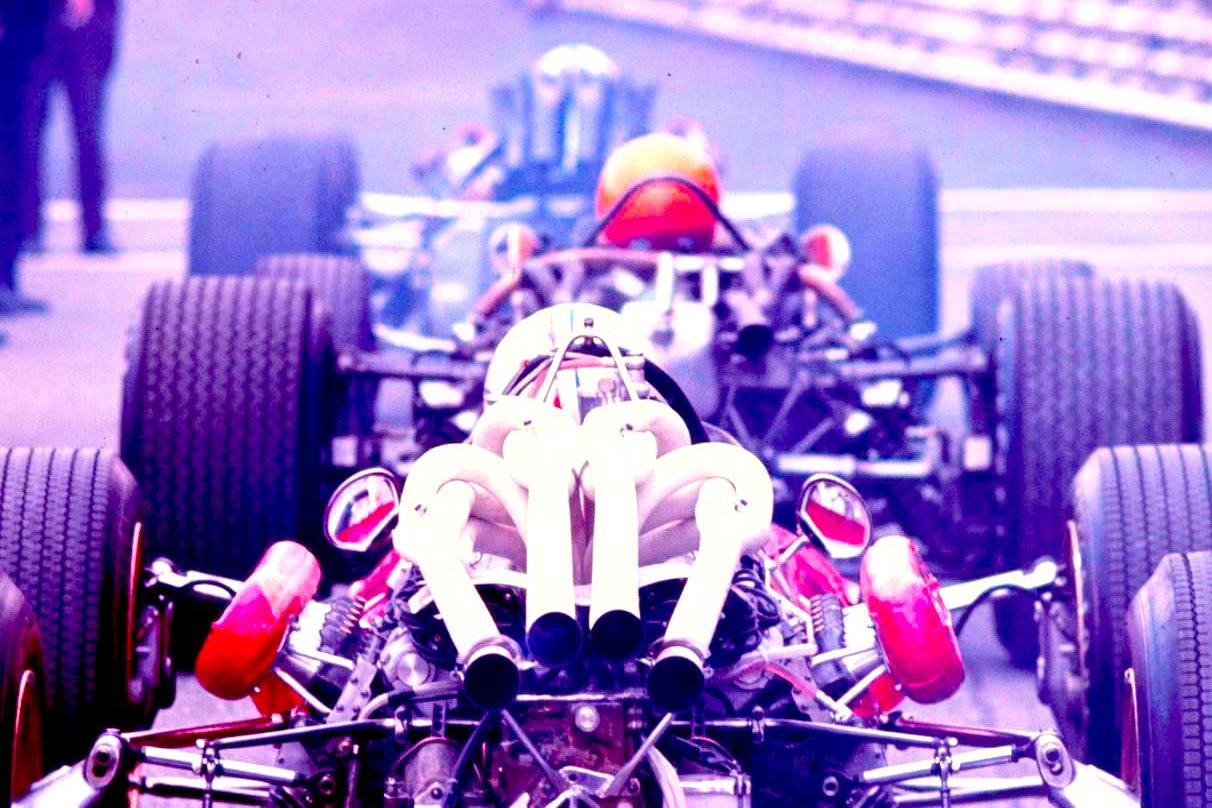