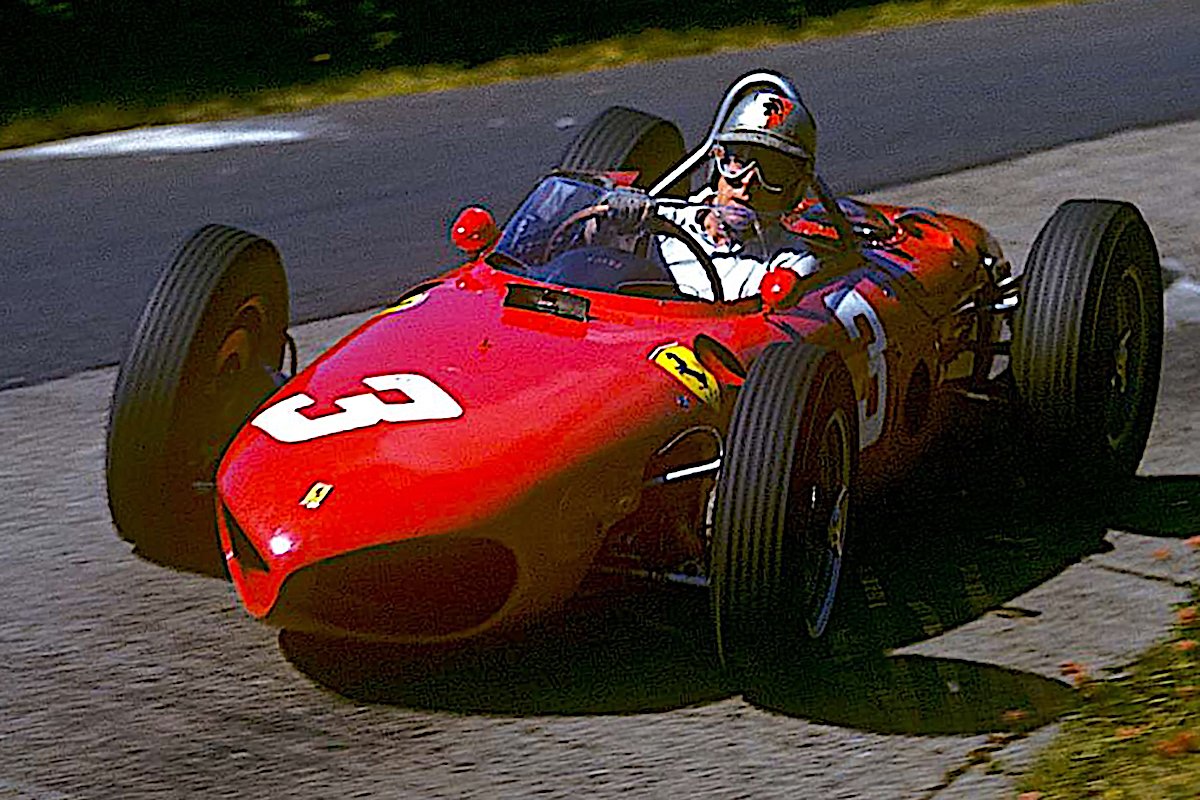 Racing has always attracted the rich and famous. Eeven blue blood. Wolfgang von Trips was the best of them

One of the more memorable names from Formula 1’s early days, Wolfgang Alexander Alber Eduard Maximilian Reichsgraf Berghe von Trips is possibly the personification of ‘racing royalty’ and born into German nobility on May 4 1928.

While his family wanted young Wolfgang to develop a love and knowledge for agriculture so he could manage the family farming business around its Burg Hemmersbach castle in the Rhineland, in his youth, von Trips would frequently visit the nearby Nurburgring, where he developed an underlying appreciation for motorsports.

His affliction was halted by the outbreak of the Second World War, but once the conflict was over, von Trips returned armed with a driving license, plenty of land and the family motorcycle. His two-wheeled thrills tempted Wolfgang to pursue something even more exciting and without any prior experience, von Trips went car racing in a Volkswagen Beetle.

His early exploits are not adequately recorded, but in 1954 he bought Porsche 356 and entered the Mille Miglia. In spite of his relative youth and inexperience, he returned from his thousand-mile thrash from Brescia to Rome and back second in class and 33rd overall. 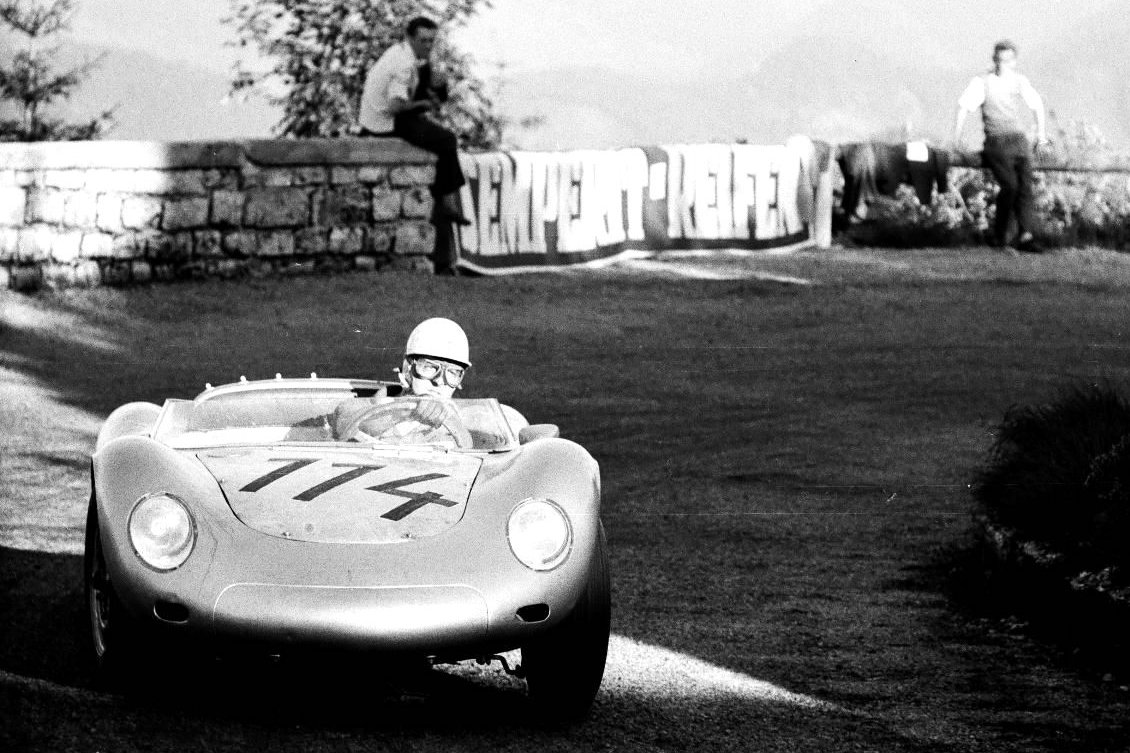 Luckily for Taffy, as his close friends called him, legendary Mercedes race team manager Alfred Neubauer noticed von Trips and offered the young German a seat in one of his silver arrows sports cars. Von Trips thrived on the opportunity, but progress was be put on hold by another calamity.

This time it was the 1955 Le Mans disaster where von Trips’ Mercedes teammate Pieirre Leveigh and 82 spectators were killed when his magnesium bodied SLR exploded into the crowd after a collision. Mercedes pulled out of motorsports entirely but rather than calling it quits, Wolfang reunited with Porsche

His won his class en route to fourth place overall in the 1956 Le Mans 24-hour, where in a season that also yielded a couple of class wins at Sebring, von Trips attracted none other than Enzo Ferrari’s attention. A call followed soon enquiring as to the availability of the young count’s driving services… 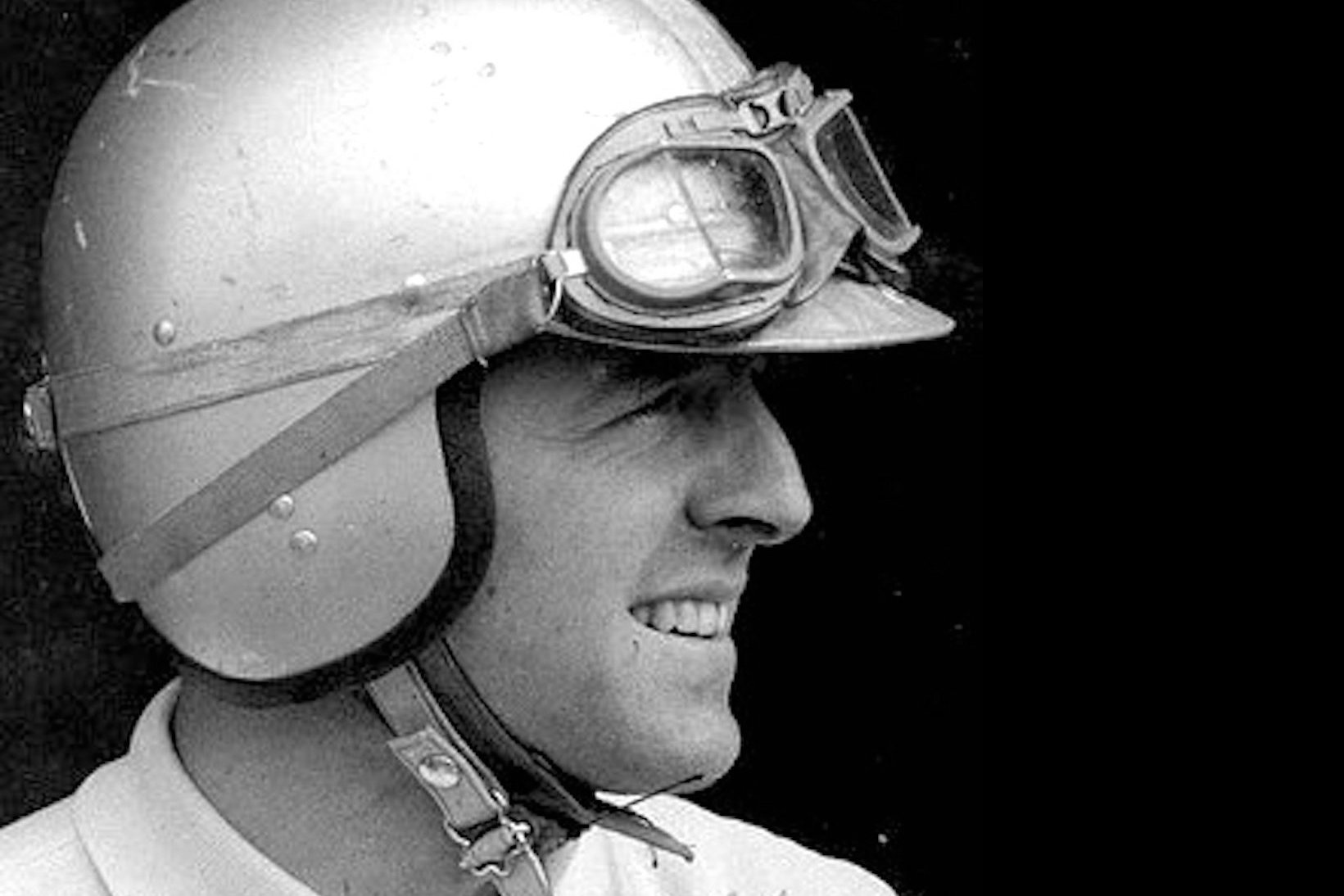 Ferrari’s quest proved fruitful to von Trips, who went on to spend the majority of his racing career driving Enzo’s cars. The plan was for Wolfgang to make his Formula 1 debut at the 1956 Italian Grand Prix with Ferrari, but yet again, Taffy’s career was put on hold.

His Lancia-Ferrari D50 suffered a steering failure, causing the car to spear into the Monza trees in an accident in which his injuries were fortunately limited to a broken arm. They were still sufficient to delay von Trips’ F1 debut into 1957.

Wolfgang was back in action for the season opener in Argentina – a 100-lap race around the 4km Buenos Aires circuit where von Trips had the dubious honour of filling the reigning then four-time world champion Juan Manuel Fangio’s seat after the great Argentinian had jumped ship to Maserati on his mission to a fifth world title.

Fangio’s move proved the right call as it transpired that the top four positions were filled by Maserati’s 250Fs, headed by the great home hero. In an attempt to curb Maserati’s domination, the top two Ferrari cars were shared between five drivers – starting eleventh, the number 18 Ferrari shared by von Trips, Cesare Perdisa and Peter Collins rose to sixth place finish to miss the points by a position. 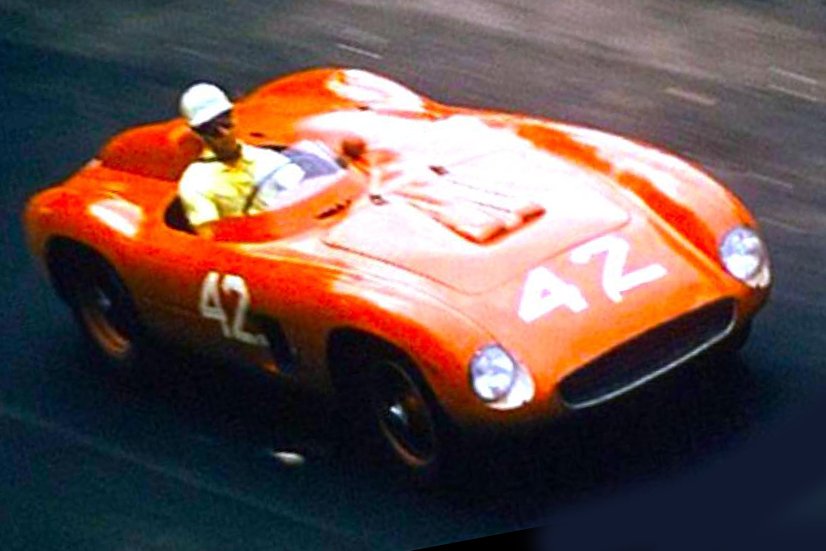 Taffy was back in action at round 2 in Monaco, but retired ten laps from home after engine failure before missing the next five races before returning for the season finale at Monza a year on from his accident. This time however, von Trips enjoyed a little better Italian luck as he scored his first points and podium with third aboard Ferrari’s 801 to wrap up 14th in the ’57 title race with four points to his name.

1958 started quietly with von Trips’ season commencing at round two at Monaco but marred by a late engine failure. Taffy was only back in a Ferrari again at round six at Reims – a gruelling old school street circuit through the French countryside and villages. Mike Hawthorn won with von Trips third place in a race marred by the death of their Ferrari teammate Luigi Musso.

Wolfgang followed that result up with a fourth and a fifth at rounds eight and nine in the respective German and Portuguese Grands Prix to see him amass nine points to end up 12th overall in his part season. 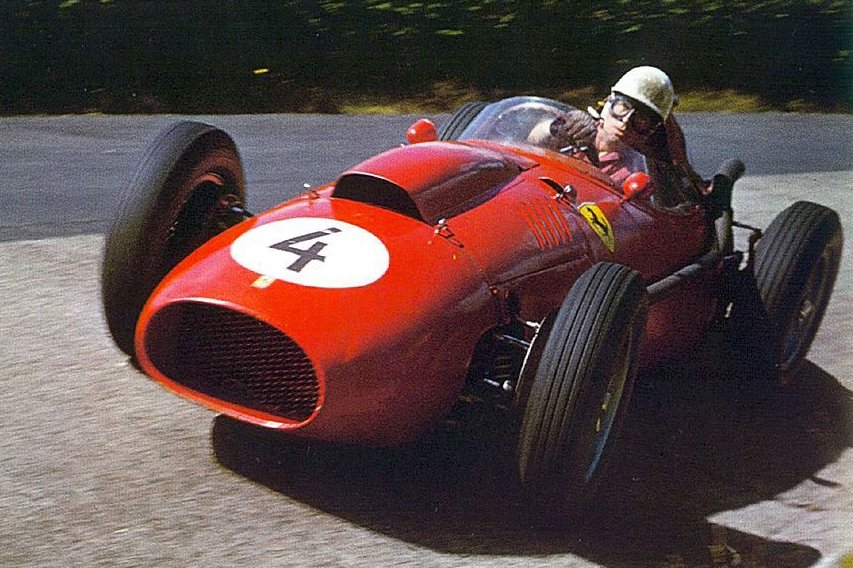 1959 proved a quiet year for von Trips, but 1960 saw the nobleman compete in his first full season in Formula 1, which although it did not deliver a rostrum for Wolfgang, his results through the year proved far more consistent with five points-paying finishes delivering ten points over the ten rounds to see Taffy to seventh in the ’60 championship.

Many tipped Wolfgang von Trips as a serious title contender in 1961 armed with the all-new rear-mid engined 1.5-litre ‘shark nose’ Ferrari 156 and the ‘horse behind the cart’ for the first time.

The predictions appeared on point from the get-go when the season started late at Monaco, a race for once free of the reliability niggles that troubled him in the principality over the years. This time however, von Trips crashed the 156 with two laps of the chaotic race left to run, but he had done enough to grab fourth place.

Race two took the pack from Monte-Carlo to the Dutch beaches at Zandvoort where von Trips qualified second with an identical time to pole man, title-rival and teammate Phil Hill. Von Trips passed Hill on the first tour and led every lap of the race. The two had a clear advantage along Zandvoort’s straights, allowing them to leave the pursuing Jim Clark’s Lotus in their wake as the Ferrari pair to scrapped all the way to the line where they were still under a second apart when the chequered flag flew.

Then in his fifth year in the sport and with his first win under his belt, Wolfgang was demonstrating his potential as a naturally fast racer. The momentum carried on into Belgium, with Ferrari again dominating in a 1-2-3-4 finish around the 14.1km circuit with von Trips finishing third over the thirty lap endeavour just 0.7 seconds behind Phil Hill. His run was paused by a retirement at Reims but it very much be resumed at the British Grand Prix.

Once the torrential rain eventually dried up at Aintree, Ferrari had locked the podium as von Trips stood on the top step following a dominant drive to a 45 second win over Hill. Taffy’s fourth podium of the season German Grand Prix following another wet race on the daunting Nurburgring Nordschleife, where von Trips ended second behind Stirling Moss following another race-long battle with teammate Hill. 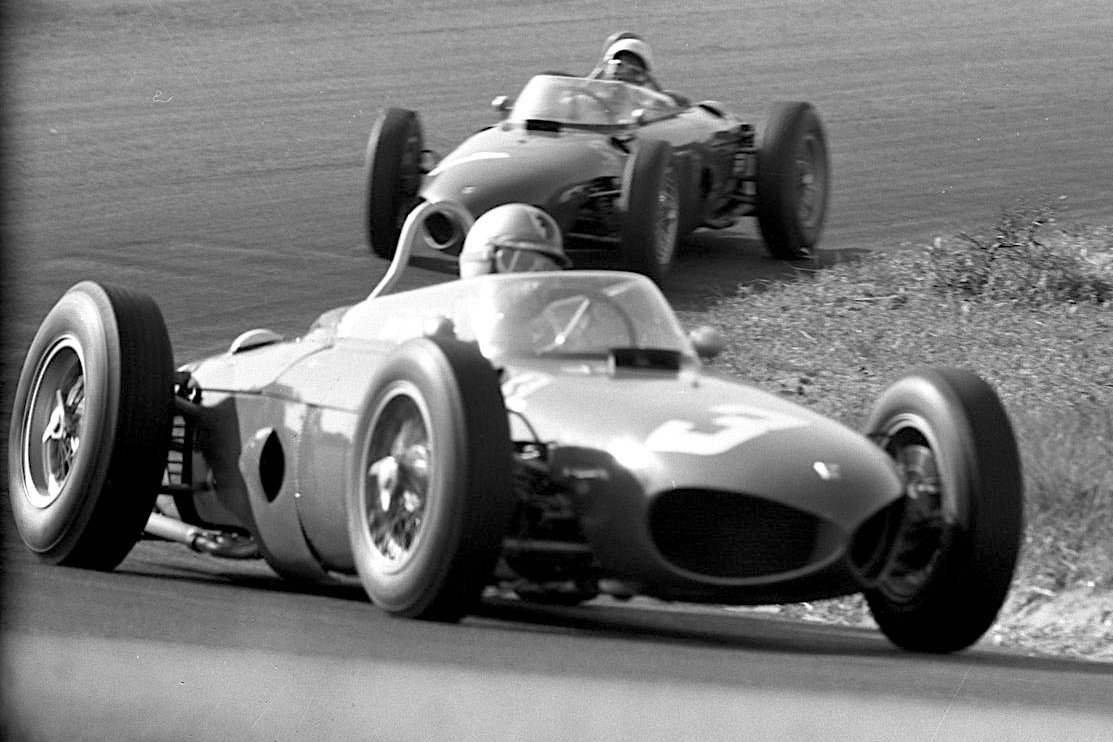 The next round was at Monza, which returned to a road and oval combination format on 10 September 1961 with four drivers were mathematically in with a shout for the title, but the real fight was between Ferrari teammates Phil Hill and Wolfgang von Trips. Von Trips qualified on pole position in front of the adoring Tifosi, but he and Jim Clark collided on the run down to the Parabolica.

Von Trips’ Ferrari 156 speared across the track and up a grass embankment where several spectators were watching the race. Von Trips was killed as he was thrown from the airborne car, but the Ferrari somersaulted into the crowd to also take the lives of fifteen spectators.

Unaware of the tragedy, Phil Hill raced on to win the race and secure the driver’s championship, but Ferrari pulled out of the final round US Grand Prix Watkins Glen out of respect if its fallen driver.

Wolfgang von Trips personified racing royalty. Born to a privileged background, Taffy lived his dream as he forged a career out of his passion. In the early days, he raced under the pseudonym Alex Linther to try not draw attention to his lineage – a move not uncommon, as you will read throughout our Racing Royalty series. Rarely however, has there ever been a royal driver so naturally talented as was Taffy von Trips.

Until his tragic accident, there was every possibility he would be crowned champion. Yet fate would not have it and instead Wolfgang von Trips’ tragic loss inspired technological and regulatory change to promote driver safety that has since reduced the tragedy of Formula 1 to the very bare minimum.