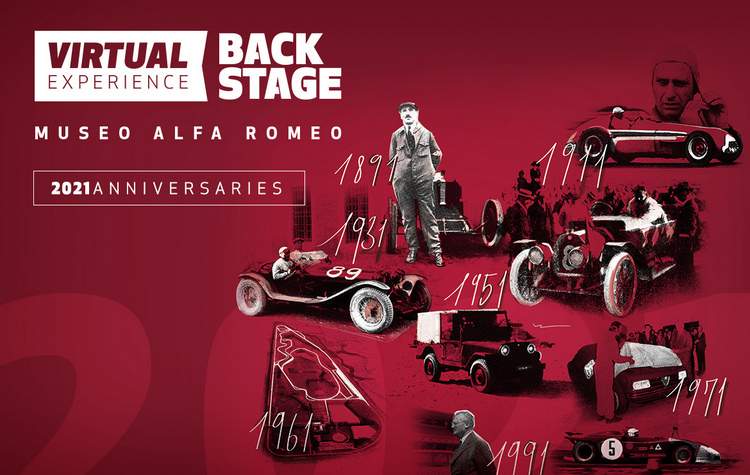 The activities of the Museo Alfa Romeo are back on track – virtually, for now – with a calendar of monthly appointments.

Twelve important pages in the brand’s long and glorious history, which the Museum has decided to celebrate by giving all the brand’s fans a special calendar that can be download in pdf on the portal museoalfaromeo.com.

From the men to the victories, from the cars to the plants, these twelve conferences – one for each month – will characterise the activities of the Museo Alfa Romeo throughout 2021 with its Backstage events, a series of monthly conferences addressed at an audience of fans to dive deep into the yet unknown or less renowned pages of the Biscione’s history.

The conferences will take place on Sunday afternoons at 3 p.m. (Italian version) and 6 pm (English version). In addition to the valuable materials stored in Alfa Romeo’s Documentation Centre, they rely on the testimonies of former employees, designers, test drivers and race drivers, as well as of many other people who have experienced these stories first-hand. The complete calendar of events can be downloaded here

In this time of strongly limited mobility, our Backstage conferences will be streamed live on our Facebook profile @museoalfaromeo. But once the Museum reopens its doors to the public, the conferences will also take place live, to allow fans to participate directly with their Alfa Romeos and enjoy the traditional parade on the Museum’s internal track.

The first Backstage conference will be streamed live on Sunday, January 31st at 3 p.m. (in Italian, while the English version will follow at 6 p.m.) and will be dedicated to the 50th anniversary of a victory that became a legend: Alfa Romeo’s triumph at the 1971 Targa Florio, with Nino Vaccarella-Toine Hezemans’ victory, followed by De Adamich-Van Lennep, also on a 33/3.

In addition to rare or unpublished documents currently preserved in the Alfa Romeo Documentation Centre, the audience will be able to listen to the direct testimony of Toine Hezemans and the passionate story of Andrea De Adamich, who will be answering questions for the audience after the conference.

The next appointment is on February 28th, with a conference that will celebrate the 110th anniversary of Juan Manuel Fangio’s birth, who, in 1951, won the second Formula 1 world title for Alfa Romeo behind the wheel of the Tipo 159 Alfetta. On March 28th, Vittorio Jano will be in the spotlight, the “father” of the P2, born in 1891.

Another important anniversary – which will be remembered in our conference on April 18th – is the launch in 1961 of the construction of the Balocco Proving Ground, Alfa Romeo’s Experimental Centre which at the time was counted one main track and other smaller tracks to test drive the road and #racing vehicles produced by the Milanese carmaker.

In addition to the operations strictly linked to series production, for which the track had been specifically designed and built, the track hosted the activities of Autodelta, which developed its race cars in Balocco.

Then we move on to the twentieth anniversary of a prestigious title, that of “car of the year”, won by the 147 in 2001. Alfa Romeo’s sportscar will be in the spotlight at the Backstage event on Sunday, May 30th, while on June 27th, the stage will be entirely dedicated to the 4C Concept, which was presented at the Geneva Motor show in 2011 and is currently preserved in the Museum’s Collection, in the section of the storage rooms which are now open to the public upon reservation.

A due tribute must be paid to the memory of President Giuseppe Luraghi on the 30th anniversary of his passing and his life and works will be the object of our Backstage conference on Sunday, 25th July.

110 years separate us from the first ALFA competition contended by a vehicle that had been produced in the Portello plant: in 1911.

In fact, Nino Franchini and Giuseppe Campari on board the ALFA 12 HP won the Modena Regularity Race, the Biscione’s first-ever race. This will be the topic of our Backstage talk on Sunday, 29th August.

2021 also marks the 70th anniversary of the AR 51, better known as the “Matta” (Crazy one), the off-road vehicle produced by Alfa Romeo from 1951 and mainly intended for the Armed Forced: this will be the topic of our Backstage event on Sunday, 12th September, while on October 10th, we will celebrate in great style to mark the 50th anniversary of the Alfasud. Not only the best-selling Alfa of all time, but also one of the most technologically advanced cars of the period.

The last two Backstage conferences are dedicated, on November 14th, to the 164 Protéo Concept – presented at the 1991 Geneva Motor Show, it was a futuristic coupé-cabrio designed by the Style Centre on the platform of the 164 – and, on December 12th, to the 8C 2300, the authentic icon of the brand which debuted in 1931, the same year in which it led Nuvolari to victory in the Targa Florio and e Howe-Birkin in the 24h Le Mans.