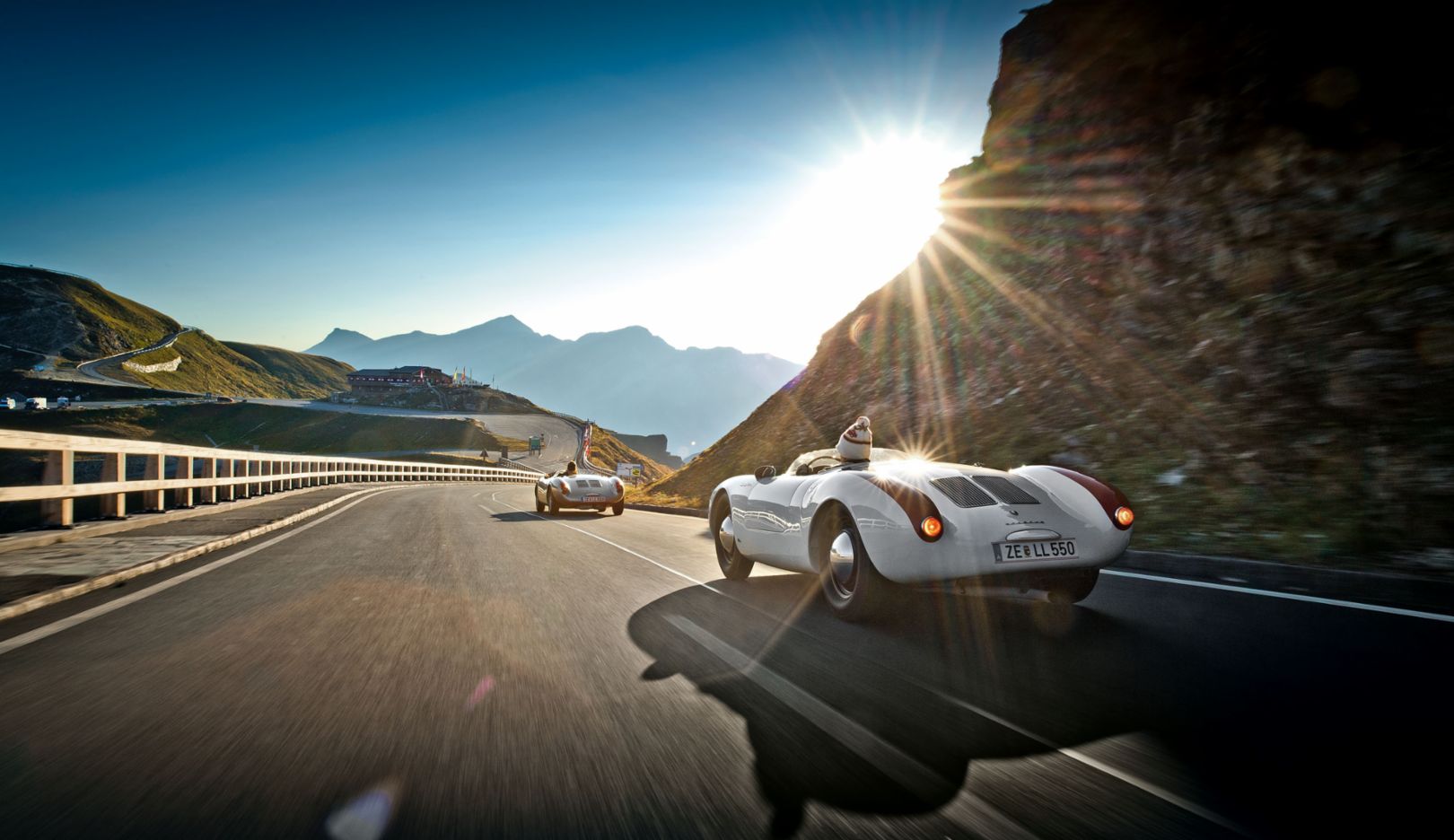 70 years after old man Ferdinand Porsche died, his grandson and great grandson take us for a spin in two of his finest.

Ferdinand Porsche passed away today, 70 years ago. We take a spin over one of his favourite roads with two with his two scions. Enjoy the ride!

The Großglockner – that epic high Alpine mountain road figures prominently in Porsche family lore. What a panorama: at an altitude of 2,571 metres, the Edelweißspitze offers a magnificent view of the Grossglockner (as it is pronounced, but say those double esses softly!), Austria’s highest peak. A seemingly untouched high Alpine landscape stretches out below it. A landscape like a painting, which has impressed viewers for hundreds of years.

At seven in the morning, the air up here is still cool. But the rising late summer sun is already bathing the highest peak in the Glockner Group in warm light. Below the Edelweißspitze, one of Europe’s most spectacular roads – the Großglockner High Alpine Road – winds its way up the mountain in a series of hairpin turns.

Still at a distance, two light-coloured dots dance their way through the corners with elegance and speed. As they approach, the sound of their engines reverberates up from the valley, as unique as their contours, which appear ever more sharply in the morning light. Two Porsche 550 Spyders – a rare pair of the first Porsche sports cars to write racing history in the 1950s.

Pure driving pleasure on an empty road. Both the drivers and the cars are very clearly in their element on this challenging mountain stretch. They are at home on the terrain.

Stopping at the Fuschertörl restaurant at an elevation of 2,407 metres, the two drivers take off the wool caps that protect them from the icy wind. We enjoy a real premiere: two Porsches – Wolfgang and Ferdinand, father and son – sit at the respective wheels of the two Porsche cars. 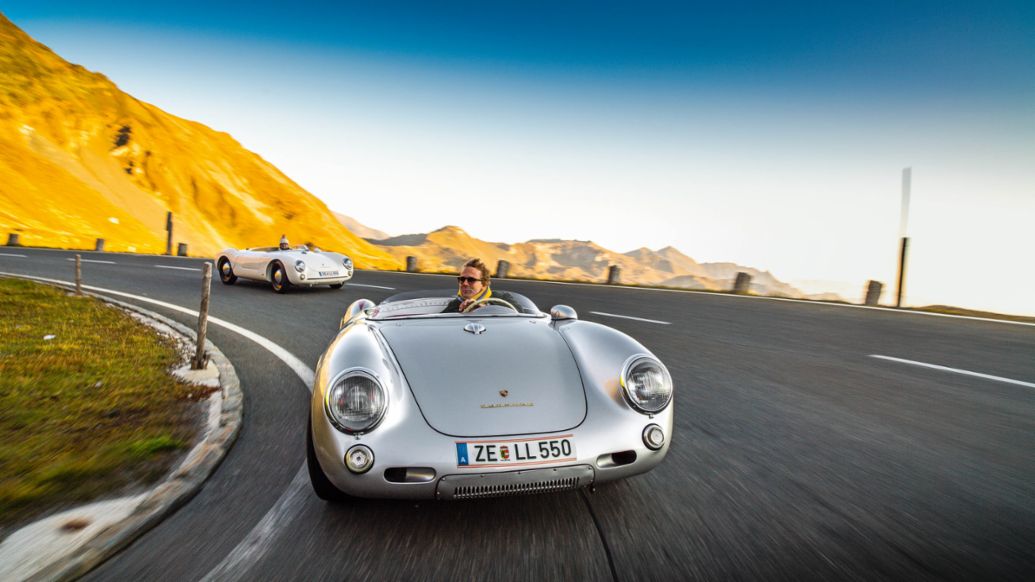 This is the first time they have driven two 550 cars together up the Großglockner High Alpine Road, even though the stretch essentially serves as the family’s home course.

“My grandfather Ferdinand began the family custom of doing test-drives here on the mountain, and my father Ferry kept the custom going,” says Dr. Wolfgang Porsche over breakfast on the restaurant’s terrace. “It was on one of those drives that he discovered the Schüttgut estate.”

Located around 35 kilometres away in the town of Zell am See, the Alpine farmstead has symbolised the family’s deep connection with the region south of Salzburg for decades. Today, Schüttgut is the residence of Wolfgang Porsche.

Father and son have enjoyed driving the pair of historical racing cars through hairpins with nicknames like Piffalpe and Hexenküche. “This is just the second time that I’ve driven a 550 Spyder,” says Ferdi Porsche (“Please call me Ferdi, not Ferdinand,” he hastens to say.)

“Even at 50 km/h it seems like you’re moving fast because you’re basically sitting in the open air.” It feels a little cool, “but that just adds to the experience.” As do the spartan furnishings of this uncompromising racer,  with its thin bucket seats and low front windshield that can barely block the airstream.

The result of this streamlined quality is a weight of only around 600 kilograms. The 1.5-litre boxer engine’s 110 hp made the car a superior performer in the mid-1950s. Named after its inventor, the Fuhrmann engine was Porsche’s first drive system designed specifically for racing. The silver Spyder that Ferdi is driving was originally used for club races in the USA before coming to Austria, where Wolfgang acquired it for his collection. 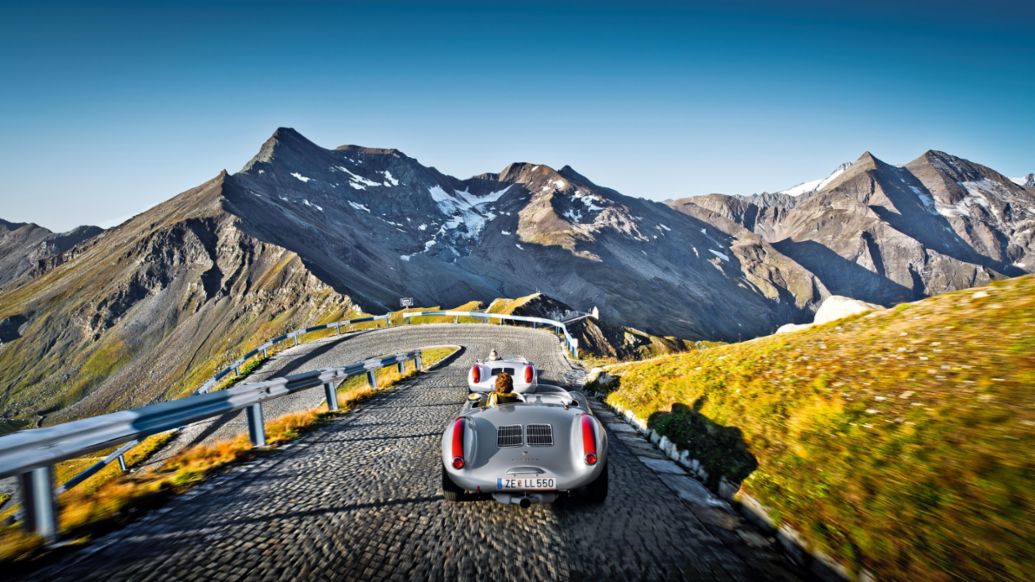 Father and son share a love of cars. The passion is passed down from generation to generation in the Porsche family – which should hardly come as a surprise. “Nothing has changed since my grandfather’s time,” says Wolfgang. “Everything we do revolves around cars.”

He himself began gathering experience behind the wheel as a child. He was just 12 when he was allowed to drive the 10,000th Porsche off the factory floor in Zuffenhausen in 1956. “I could hardly sleep the night before,” the now 77-year-old recalls with a smile.

The passion for sports cars finds a worthy context in this road on the Großglockner. The Chairman of the Supervisory Board of Porsche Automobil Holding SE and Porsche AG takes every opportunity to drive up to the peak.

And whenever he does, he takes a souvenir photo at a very specific place along the road. The car may change, but the backdrop remains the same. This has led to an impressive photo gallery of classic Porsche cars against the majestic Austrian peak.

The white 550 Spyder that Wolfgang Porsche is driving today is already part of this photographic collection. It has an impressive vita. It once served Ferry Porsche as his private vehicle, and was later driven in competitions by Porsche racing director Huschke von Hanstein, including the spectacular ice race in Zell am See.

This particular family tradition is also being carried on because Wolfgang’s son Ferdi began running a new version of the race together with Vinzenz Greger in 2019. Wolfgang appeared in precisely this white racing car at the premiere of the GP Ice Race in 2019.

The enthusiasm shown by the primarily young spectators who flock to the GP Ice Race demonstrates to Ferdi that “the passion for cars lives on in my generation.” That makes him all the more pleased that “the Taycan puts the company at the forefront of technological developments in e-mobility.”

The fact that he bears the name of his great-grandfather – who was already designing electric cars in the late 19th Century and first gained acclaim with the Lohner-Porsche electric vehicle back in the year 1900 – is yet another of the family’s fascinating stories. 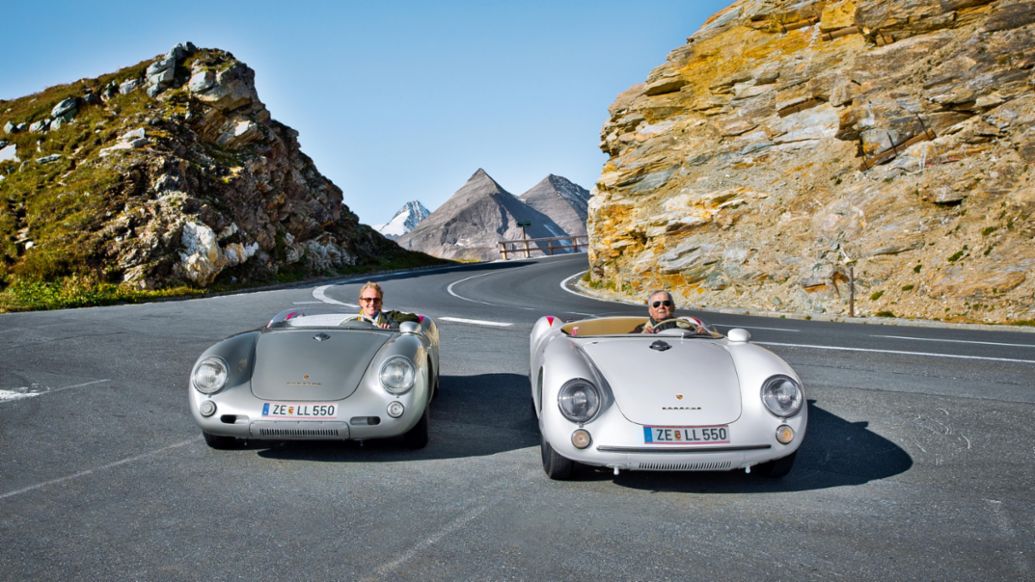 For Ferdi, a 27-year-old who has just completed architectural studies in Vienna, environmental consciousness plays a major role. “As an architect you always need to deal carefully with nature as well.”

“The passion for cars lives on in my generation.”Ferdinand Porsche

Living in harmony with nature is also important for his father, Wolfgang. “I’m a farmer in my spare time,” he says, and mentions his extensive pastures and 200 or so Pinzgauer cattle with evident pleasure. “They are a lightweight type specially bred for steep slopes, because heavier breeds trample the vegetation,” he explains. Schüttgut is also home to fruit trees, honey production, and more.

“We bake bread and process our own meat,” says Wolfgang, not without pride. A committed hunter, he comments that “we are practically self-sufficient.” The only thing they no longer have is poultry. “But we’ll get that back up and running too,” says Ferdi without any prompting.

Although this city dweller doesn’t share his father’s love of hunting – or “not yet” as the latter interjects – he is becoming ever more aware of the benefits of country life. Zell am See and the surrounding area make that easy.

“Where else could you find all of this?” he asks.

“In the summer we go swimming, and in the winter we can start skiing right out the door.” Generations of family traditions and values live on. As the father notes, “We’ll always be down to earth. It’s important to me to pass that on to my children.” Has he succeeded? “Yes,” attests Ferdi. “We had a very normal upbringing – though perhaps with a somewhat sharper sense of speed.” 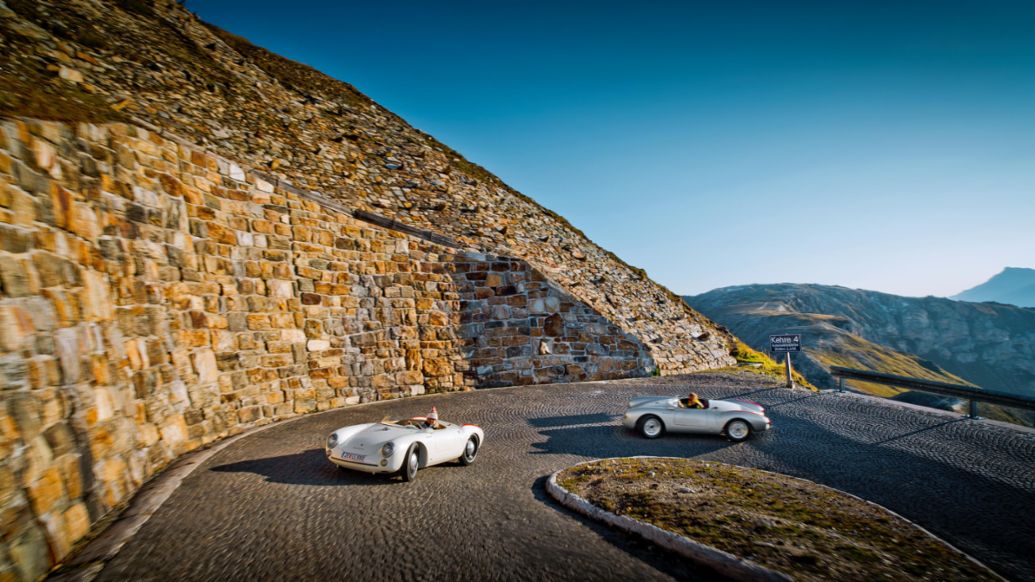 Favourite place: Wolfgang Porsche always takes a souvenir picture at the same spot. This time the photographer does the honours for a generational portrait.

Even in good weather, an excursion on the Großglockner High Alpine Road is a challenge – and all the more so in a 550 Spyder. Before Wolfgang Porsche sets off back down toward the valley this morning, he has a request for photographer Stefan Bogner.

Can they stop at the usual place and take the obligatory souvenir shot? Nothing would please Bogner more. And that is the genesis of a truly unusual photo – four Porsches and all of them original.