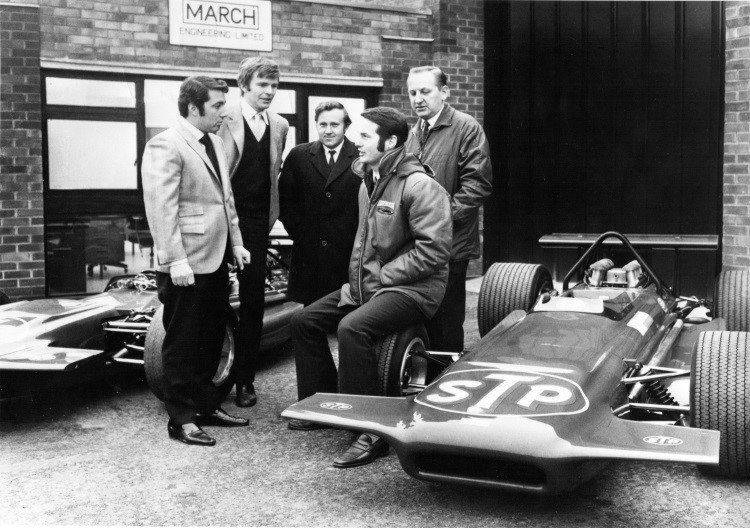 March Cars hit the big time when it unveiled its first F1 car, the 701 today in 1970. We look back at the little race car maker’s many giant killing acts

They were today’s equivalent of Dallara, a race car manufacturer that built and ran race cars in Formula 1, Formula 2, Indycar and even sportscars founded by men who played important roles in the history of motorsport as did the team they spawned.

In 1969 March Engineering was established with the intention to become a racing car production business providing chassis for customers competing in all racing categories. Each of the four founders chipped in 2,500 GBP to form a company that was to become, with the exception of Formula One, more successful in more classes than any other manufacturer ever. 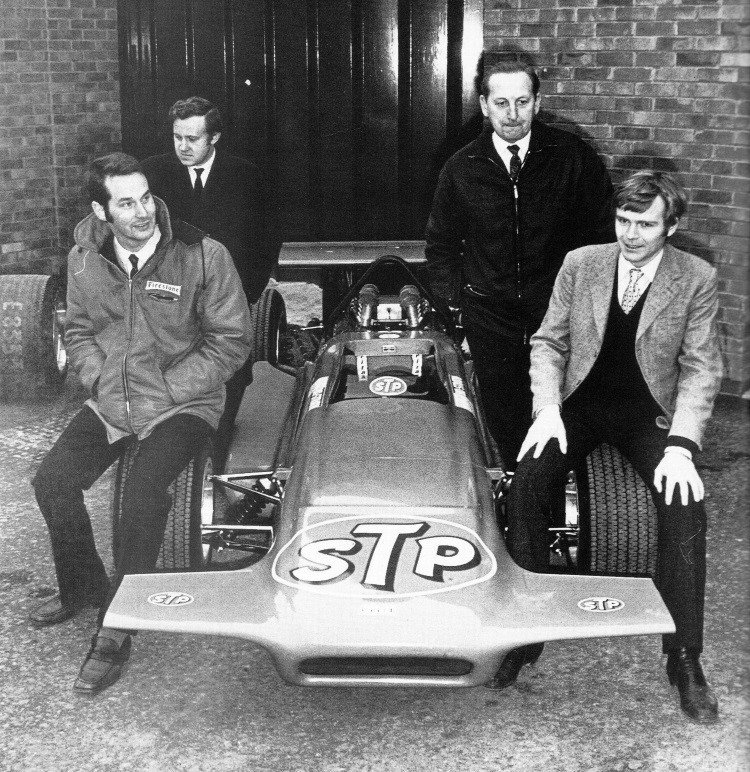 The four founders, Max Mosley, Alan Rees, Graham Coaker and Robin Herd, each had a specific area of expertise. While Max Mosley looked after the commercial side of the business, Robin Herd did the design, Alan Rees managed March racing teams and Graham Coaker oversaw the production in their Bicester factory located on Murdock Road.

After building a Formula 3 car, known as the 693 – for 1969 Formula 3 (above) – in Graham Coaker’s garage the company turned to Formula 1 in with the 701 chassis – its name as always derived from the year it was made and the formula the car was destined to race. The 701 was unveiled today in 1970 (top), the same same year Jackie Stewart gave March its first F1 victory in the non-championship Race of Champions and won the Spanish GP (below) the following month.

Also, in 1970, the company ventured into Formula 2 as well, but the competition was intense and there were no wins. March also appeared in Formula 3, Formula Ford 1600 and Can Am but without any major success. 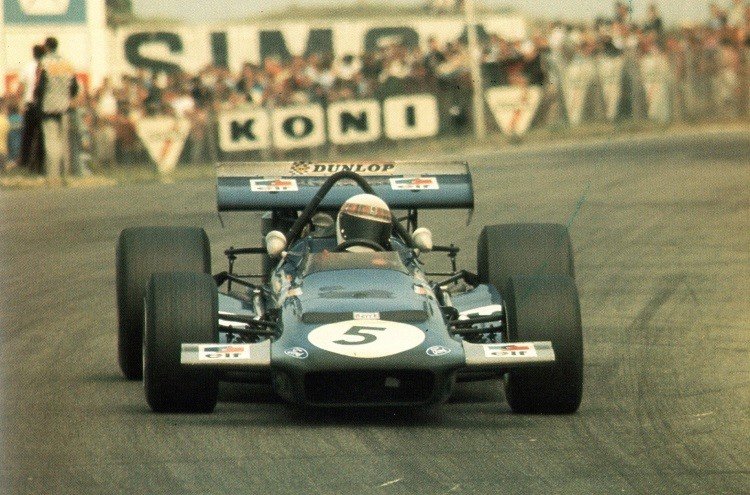 For the 1971 Formula One season March came up with the remarkable 711, aerodynamic design by Frank Costin, featuring an elliptical front wing known as the “Tea Tray.” Ronnie Peterson finished runner-up in the World Championship without any wins, but five second places. The same year he wrote history by finishing second in the closest (by 0.01 seconds) and fastest GP race ever (150.754 mph at Monza). That record stood for 32 years, until 2003.

In Formula 2 Peterson (below) was dominant in the factory March 712M (1971 F2 Monocoque), winning five championship races and taking the European F2 title. There also were some victories for customer cars and a March 713 won the British Formula 3 title the same year. 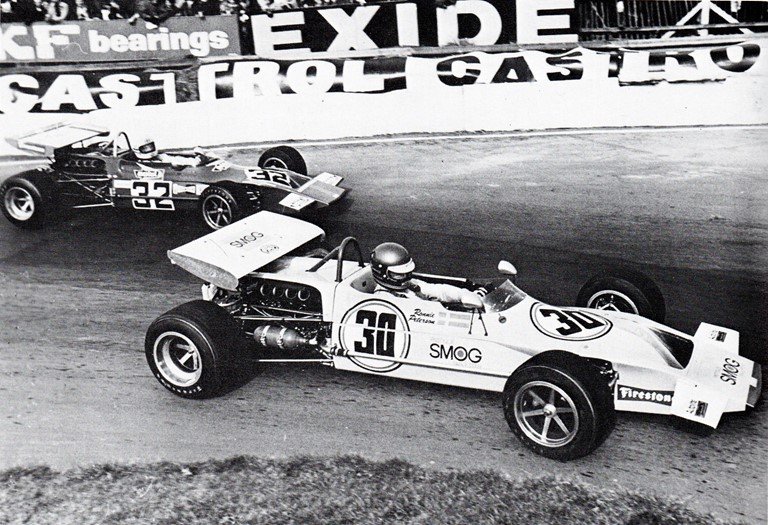 Graham Coaker left March in 1971 and tragically crashed racing one of two March F2 cars he had accepted as part of his leaving settlement. He died in hospital as a result of complications from the crash combined with pre-existing health issues. The company lost a second of its founding members at the end of 1971 when Alan Rees quit to join Shadow as team manager.

In 1972 March did not enjoy the same success as the previous year. Ronnie Peterson (below) and Niki Lauda drove the factory cars while Henri Pescarolo drove a March entered by Frank Williams. Rolf Stommelen drove for Eifelland in a car with a body designed by Luigi Colani. After re-engineering the cars twice, Peterson’s third place at the Nurburgring was the only decent result. 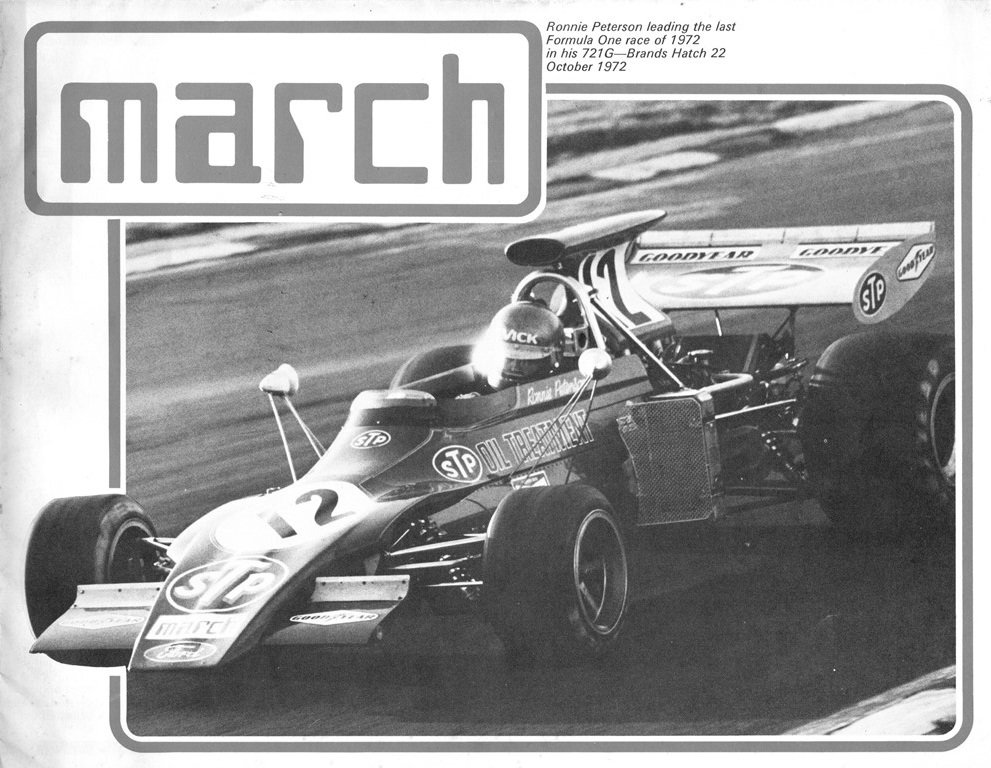 In 1973 the March factory team ran an unsponsored Formula 1 car for Jean-Pierre (a.k.a. ‘Jumper’) Jarier. In Formula 2 March began an exclusive engine deal with BMW and Jarier won the title with ease. The relationship with BMW continued until the end of the 1984 European F2 season.

In 1974 Patrick Depailler and Hans-Joachim Stuck began a domination of F2 that lasted for 8 years. March managed to win the European title three more times with Bruno Giacomelli in 1978 with a complete sweep of all the events, Marc Surer in 1979 and Corrado Fabi in 1982. The 1978 F2 car, known as the 782, developed a reputation among racers as the best non-ground effects open wheel race car ever built. This reputation is still in effect today. 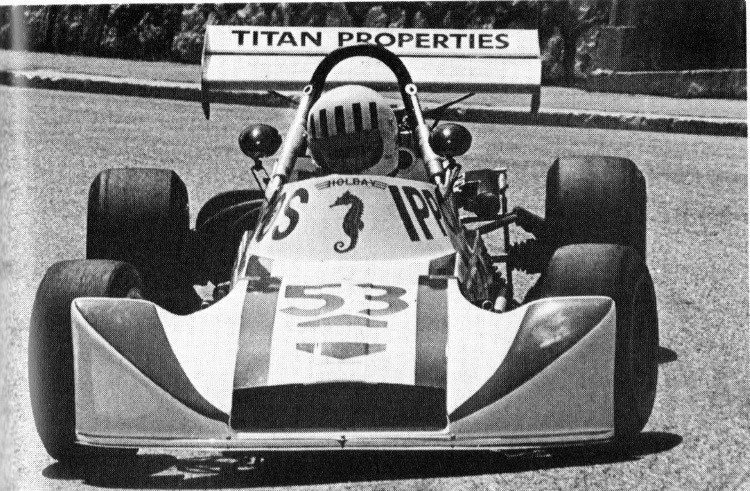 In 1974, a year full of promise with no reward, the F1 factory team ran Hans Joachim Stuck in a Jagermeister-sponsored car and Vittorio Brambilla in a Beta Tools car. Although Brambilla won the rain-shortened Austrian GP in 1975, March had little reason to celebrate in Formula 1.

In Japan’s Formula 2, March enjoyed three consecutive titles at the start of the 1970’s. Meanwhile in Formula Atlantic, a March chassis won the British title in 1972/3 and had parallel success winning the British Formula 3 title in 1974/5/6. 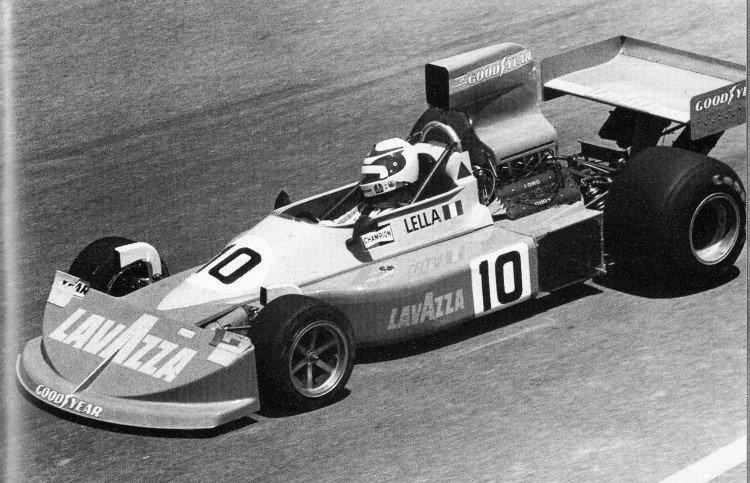 In 1975 Lella Lombardi (above) became the first woman to score a Grand Prix point and did it in a March 751.

In 1976 Peterson scored the team’s third and last GP win at Monza (below). In spite of the slim results produced, March was the last F1 manufacturer ever to sell a car to customers that had the potential to win a Grand Prix. 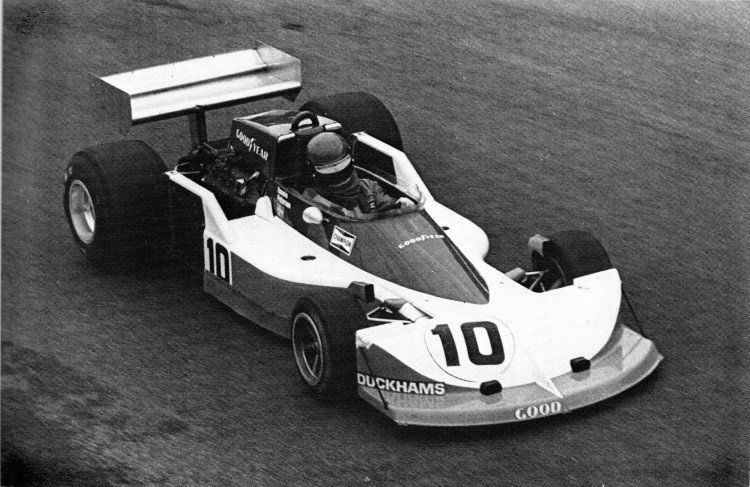 Over the winter of 1976 and ’77 March produced a 6 wheeled GP car called the 240 (below) using the naming convention often employed to name railway locomotives. That car used all front wheels, four located at the back, giving the rear wing much cleaner air flow and reducing the frontal area substantially.

A similar car assisted 4-time British Hill Climb champion Roy Lane to win several rounds of the championship in 1979. It was extraordinarily successful in rainy conditions. Roy commented that it was one the best handling cars he had driven and enjoyed fantastic wet road traction.

During the 1977 season March failed to achieve much and, at the end of the year, Max Mosley decided to leave the race car business. Robin bought Max’s shares, paid off most of the convertible debentures, and became, in effect, the sole owner of the company.

Max Mosley went on to become the legal advisor to FOCA and later a member of the FISA F1 Commission. Robin, in turn, sold his F1 assets and FOCA membership to Günter Schmid of ATS and turned his attention to the customer cars full time. The final March title in Great Britain came in 1979 with Chico Serra (below) winning the British F3 Championship ahead of five more Marches.

March moved on to win its first European F3 title in 1979 and had continued success with Michele Alboreto’s win in 1980 and Mauro Baldi’s win in 1981 as well as finishing first and second in a 813-based car entered by Euroracing in 1982. There was no other Formula 3 car built by March until 1989 when March had its F3 operation continued by Ralt, which it bought in 1988.

By 1980 Ralt started to dominate in F2 and F3 and March started struggling. Robin Herd decided to expand into the American market with an IndyCar and an IMSA GTP car. Famed McLaren designer Gordon Coppuck carried out the initial IndyCar planning before he was put in charge of the F2 designs and newly recruited Adrian Newey took over. 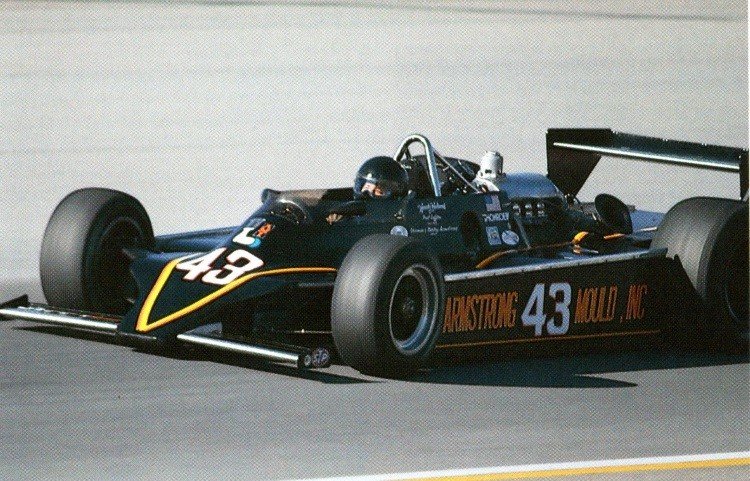 n 1981 March built its first large sports car, called the BMW M1C (below), aimed at both IMSA and FIA Group C. This chassis became the basis of a new ground effects design the following year called the 82G. The prototype design was created by Dr. Max Sardou. By 1983, Adrian Newey developed the car into a winner.

In IMSA racing Al Holbert took the March 83G (with Porsche and Chevy power) to the 1983 title. In 1984 March won the Daytona 24 and another IMSA GTP title. Nissan raced several Marches under their name between 1985 and 1989 but lacked real success. Later, Nissan stole the March name and applied it to one if its internationally marketed econo-sedans.

In 1981 Robin Herd made a half-hearted effort to return to F1 with a joint venture between March and RAM Automotive called March Grand Prix. The 811 car was basically a heavyweight copy of the Williams FW07 which had run successfully the previous year but improvements came too late and during this season Robin Herd decided to retire again from F1 again.

From 1983 onwards, March gave up running a factory team in F2 (below) concentrating its efforts on the Onyx semi-works team. More successful during the mid-1980s was Satoru Nakajima winning three consecutive Japanese F2 titles with his March.

The new Formula 3000, which replaced F2 in 1985, gave March more reason to celebrate with Christian Danner being the first champion in a March chassis. He was followed in 1986 by Ivan Capelli and in 1987 by Stefano Modena both driving Marches but the arrival of the Reynard chassis in 1988 precipitated the withdrawal from March from this class.

1986 was the first year of the American Racing League (ARS) the equivalent of the European F3000 (below) and March was able to win every single event with cars referred to as “Wildcats”. 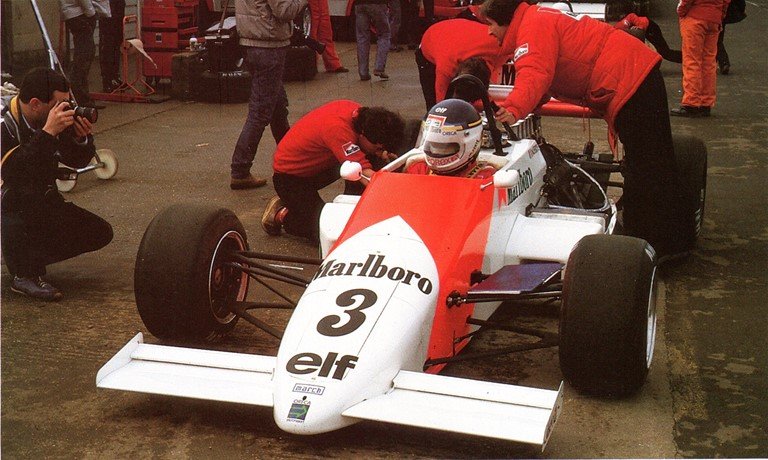 At the height of the CART success in 1986 Herd introduced the March Group PLC to the London Stock Exchange. He also entered a new Formula 1 program with a Ford powered, Leyton House sponsored 871. The car was designed by Gordon Coppuck and driven by Ivan Capelli.

In August 1987 Adrian Newey returned to March and designed the more successful 881 March-Judd resulting in March pulling off a few giant-killing performances (below) and  not only finishing in the top three only once but fifth overall in the 1988 Constructor’s Cup that season. 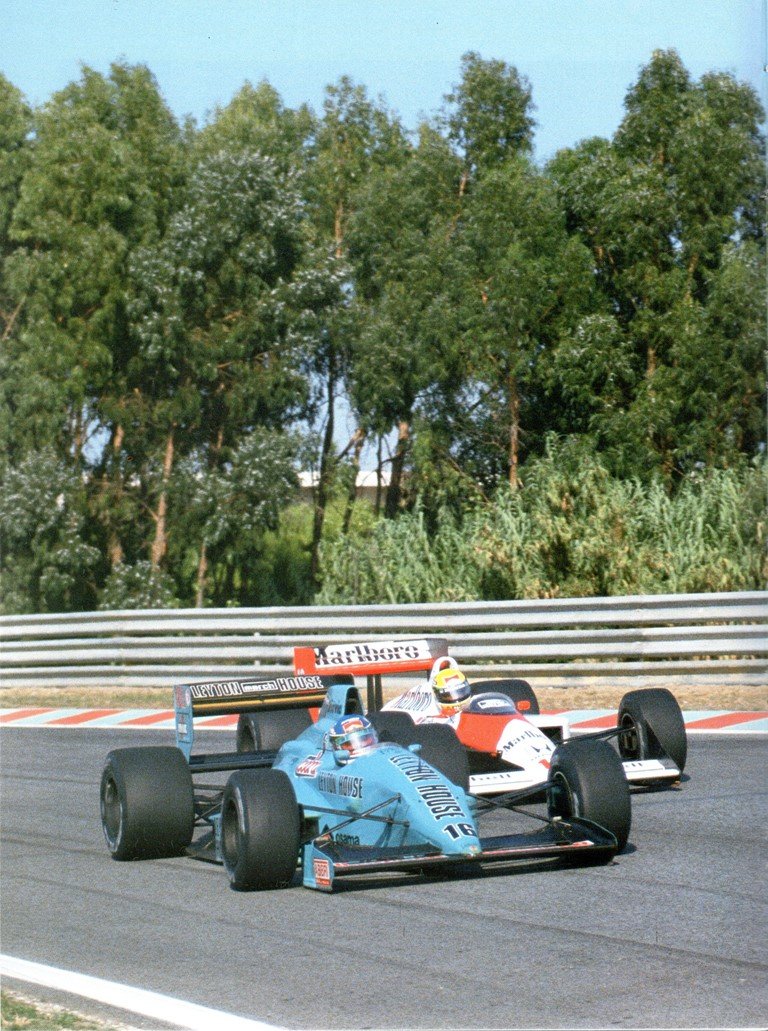 In an effort to bolster the customer markets March bought Ralt in 1988 but Reynard was taking over the market while, at the same time, the CART program was fading. Robin Herd stood down as chairman, under pressure by the board and financial advisers and weary of the stresses, to make room for industrialist John Cowen who decided that the company must diversify its financing if it was to survive.

Production was cut to supplying the 85B/86A Wildcat chassis (below) for the American Racing Series. The company also cut back its CART operations by limiting production to exclusively building cars for Porsche and Alfa Romeo. Unfortunately, these programs lacked real success. 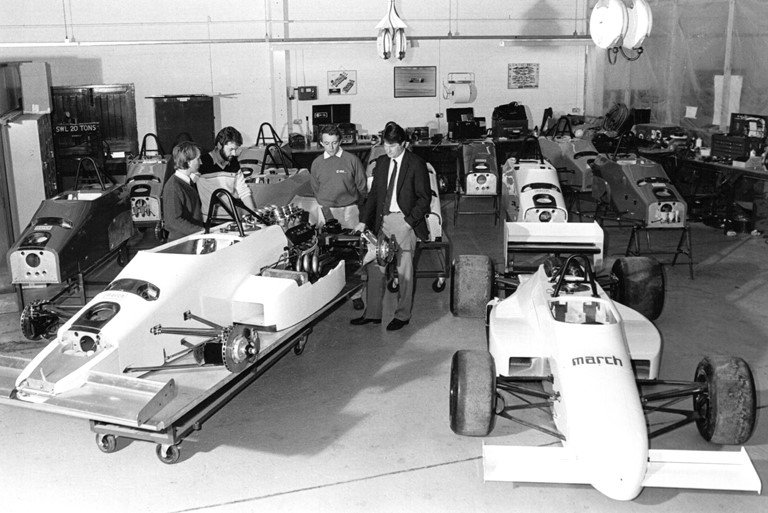 At the start of 1989, as Cowen was faced with the possibility of putting the company into receivership, the boss of Leyton House, Akira Akagi,bought the March F1 and F3000 operations as well as the wind tunnel in Brackley. March Racing now changed its name into Leyton House Racing Ltd. with Adrian Newey as one of three executive directors.

March Group PLC was split up into March Merchandising Ltd., Ralt (production cars), Comtec and March Engineering (prototypes). Robin Herd left March at the end of 1989 and Newey moved on to Williams Grand Prix Engineering in 1990.

In 1992 Leyton House was renamed March F1 but financial constraints and the arrest of team principal Akiri Akagi for fraud in late 1991 constrained the team to the use of 1991 models and the budget was limited to money the drivers brought in. Formula 3 success in France, Britain and Germany in 1992 could not prevent March Cars operation from losing money and by late 1993, the assets of March were acquired by and liquidated by Andrew Fitton and Steve Ward.

It was the end of an era.