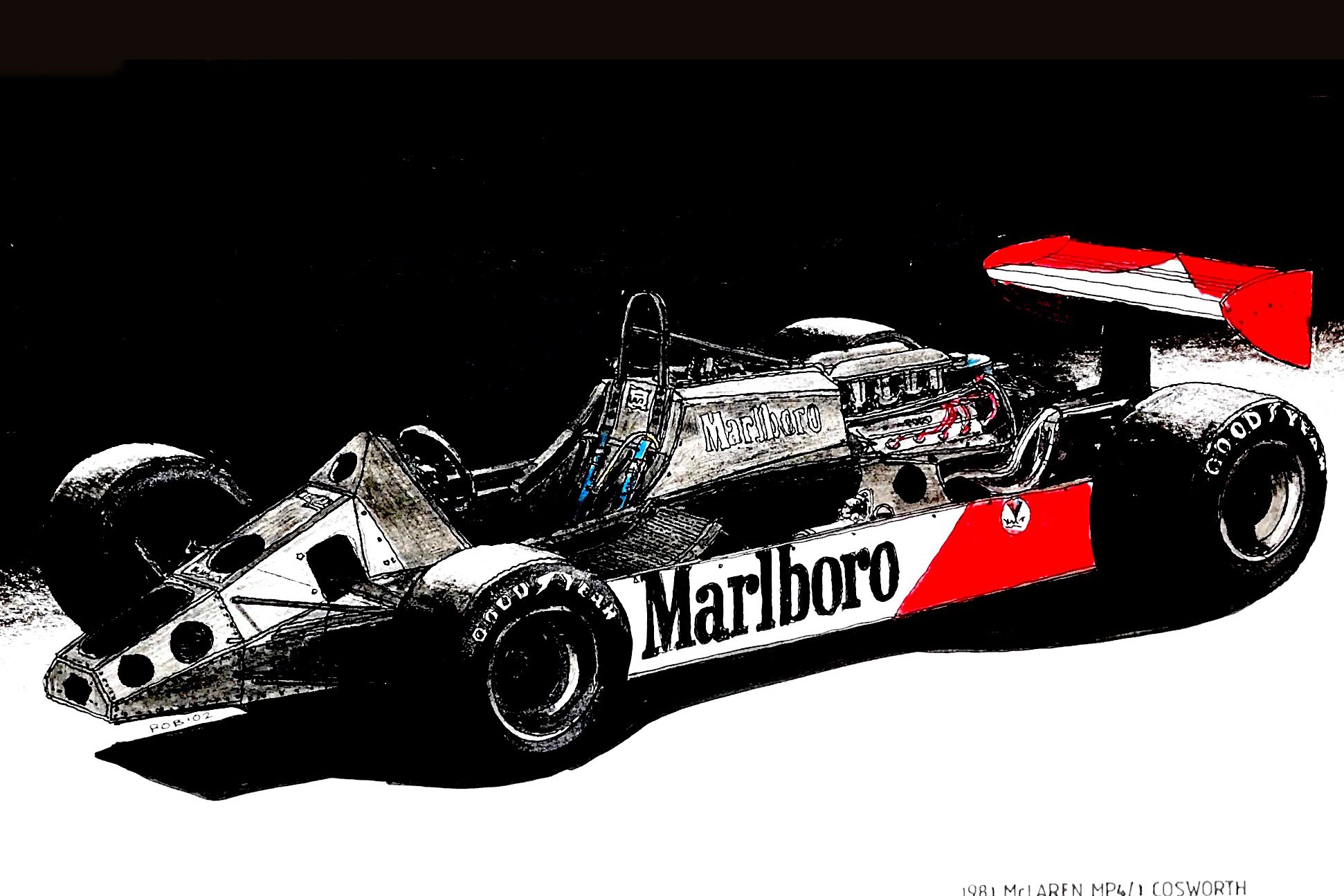 It may have been overshadowed by its turbocharged rivals in those early years of that Formula 1 era, but the neat, competent, Cosworth-powered McLaren MP4/1 was a technological innovator. It not only ushered in the Ron Dennis era in at Woking but it also quietly started winning against all odds as it set the foundation for the team’s huge success that followed.

Dennis took leadership of the iconic team in the lead-up to the 1982 grand prix season and brought designer John Barnard with him to pen his first McLaren for Niki Lauda and John Watson to drive.

The radical all-new MP4/1 was however saddled with a humble normally-aspirated Ford Cosworth V8 in the face of Ferrari, Renault and Brabham-BMW’s mega power turbos. Barnard however had a trick up his sleeve as he became the first designer outside of the aero industry to apply radical new carbon fibre Kevlar technology to his latest Formula 1 design. 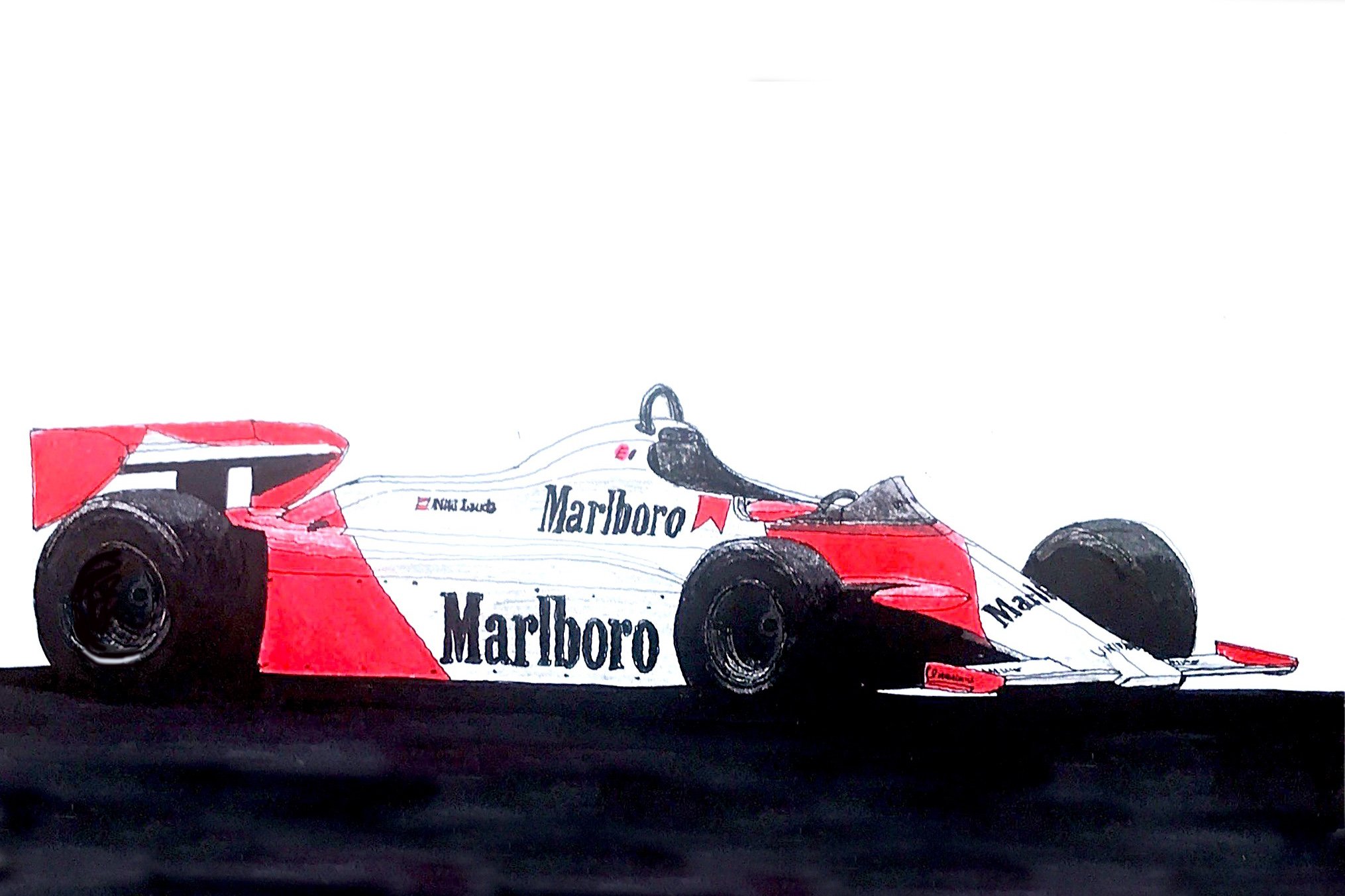 Barnard became au-fait with that new technology when in contact with US aerospace engineers while he worked on IndyCars in Arizona. He became intrigued by the revolutionary new composite material and its processes at a time when its limits, application and technology were becoming better understood by engineers and designers.

Albeit expensive and brittle by nature, carbon fibre is far more durable, significantly lighter, stiffer and structurally competent than the previous alloy and metallic monocoque solutions of riveted aluminium — it was quite simply a win-win-win-win for F1.

Thinking outside the box, Barnard and the McLaren team painstakingly designed, crafted and developed the MP4/1’s revolutionary carbon fibre monocoque tub through an intensive and exhausting program and while the designer earned himself a name for being pedantic and difficult, his methods were soon to bear fruit. 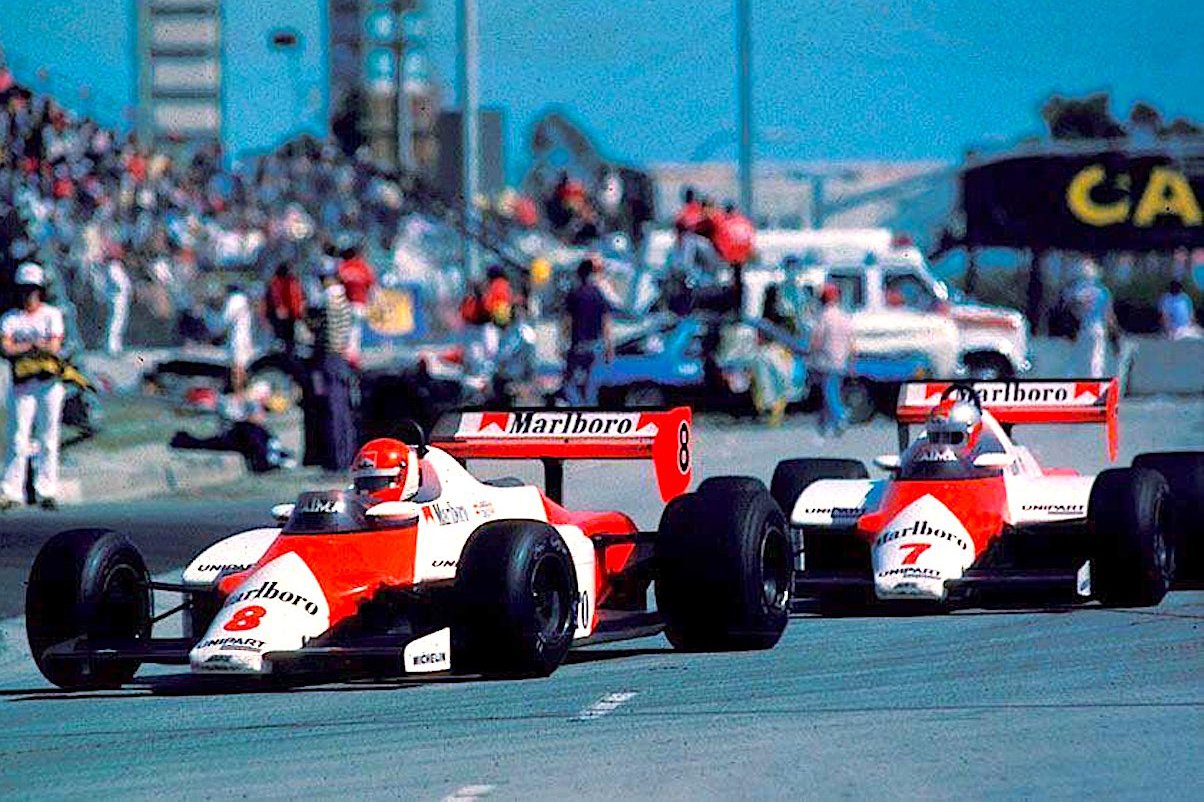 The pioneering MP4/1 was beautifully built, stiff, practical and clever. Barnard also divorced the car’s bodywork from its chassis to allow the surface panels to be aerodynamically crafted and altered and modified without impacting on the tub structure as the seasons progressed in a process.

That also saved significantly on engineering time and budgets. The MP4/1’s bodywork exuded fine build quality with tight joins and shut lines in another Barnard fetish and the white and dayglo Marlboro graphics enhanced the car’s appearance too.

MP4/1’s simple body forms and transitions carried through to the rear of the car, which was waisted inwards to shroud the rear suspension and transmission, while also smoothing airflow to the working bottom surface of the rear wing for maximum downforce. The underbelly was further shaped upwards to contribute to even more downforce and optimum flow. 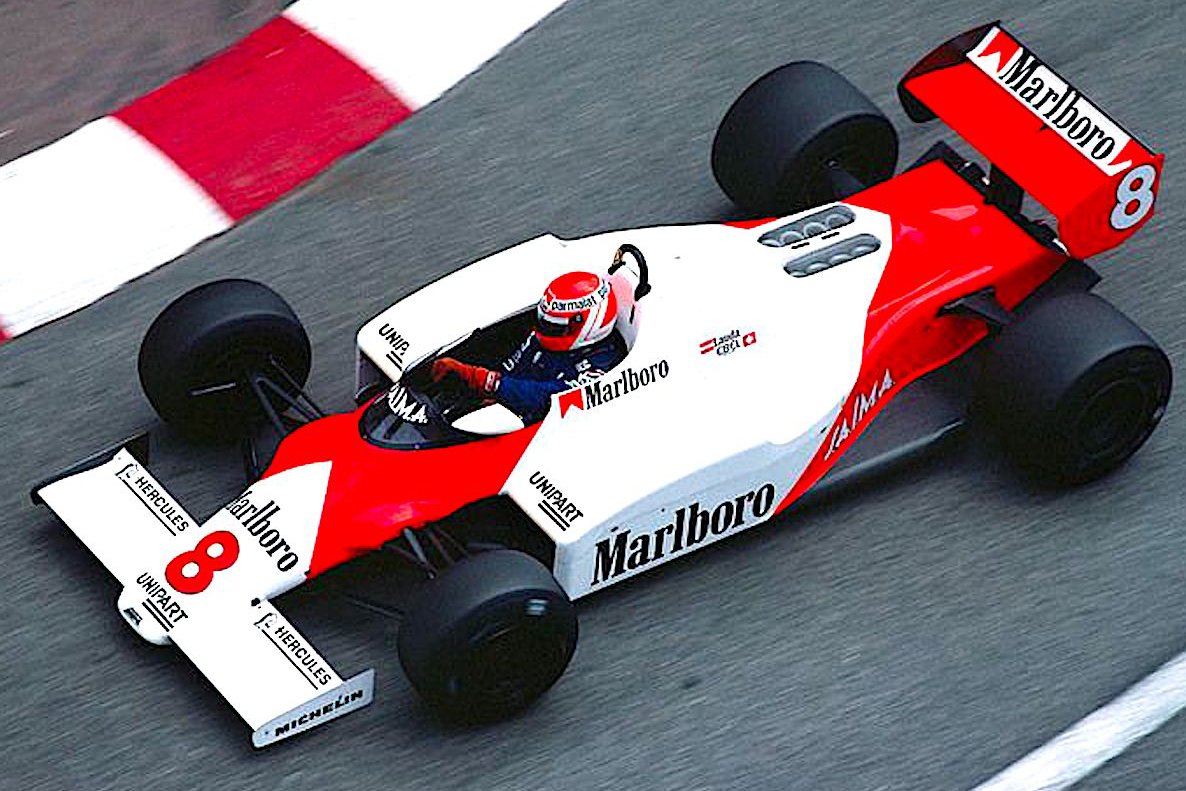 Lauda admired Watson’s speed and overtaking ability, while the mild-mannered and polite Irishman was easy to get along with. The plan soon came together, for in spite of the Cosworth-powered’ MP4/1’s distinct power disadvantage, the team was soon winning.

First came Watson’s popular and overdue 1981 British GP victory (below), then Lauda’s first win of his second comeback at Long Beach in 1982 before four more wins to come for Watson and Lauda in 1982 and ’83, that in spite of the McLaren and its ancient naturally aspirated 3-litre Ford Cosworth being decisively outgunned. 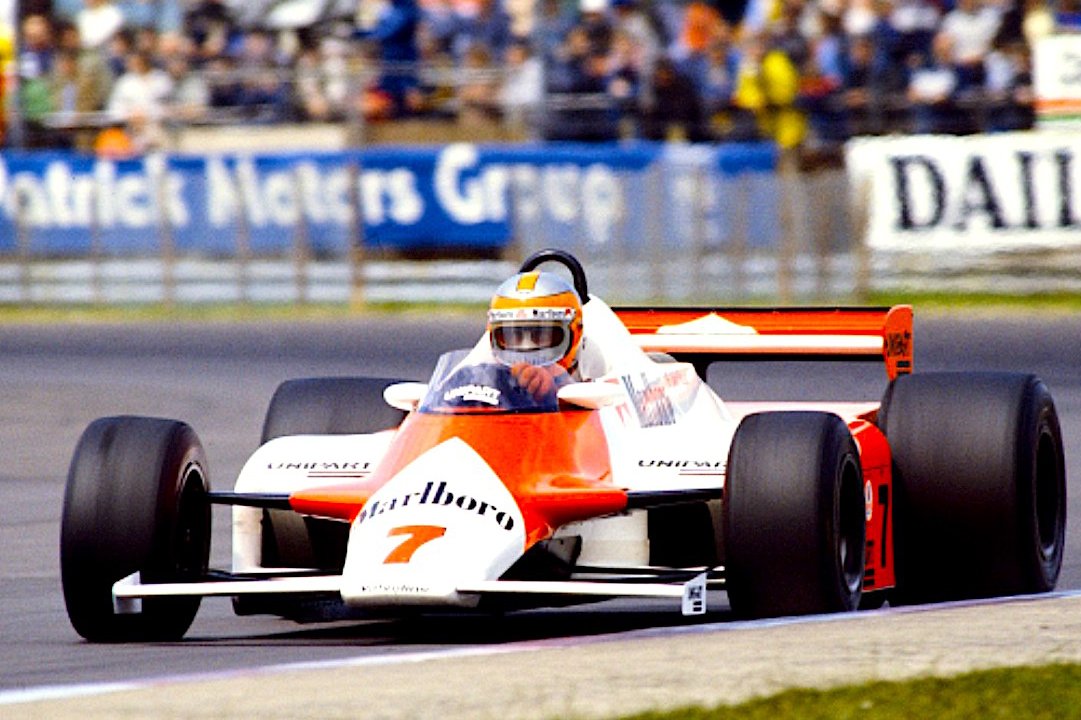 In fact, many consider the McLaren MP4/1 to be the true 1982 Formula 1 World Constructors’ Champions, slating the old official points scoring system as flawed — one of several titles have gone to more consistent performances, rather than to the fastest drivers and teams of their era.

One need only recall Stirling Moss losing to Mike Hawthorn in 1958 despite Moss winning four races to Hawthorn’s’ one, Jimmy Clark’s losing to Denny Hulme with a similar deficit of wins in ‘67, and Mansell to Prost and Piquet in 1986 and ’87.

For example, Rosberg to take the ’82 title, in spite of winning only one race with only one win, where a more adequate system could have crowned double-winner Didier Pironi as driver’s champion and the most successful team of the year, the giant-killing McLarens as construction champions. 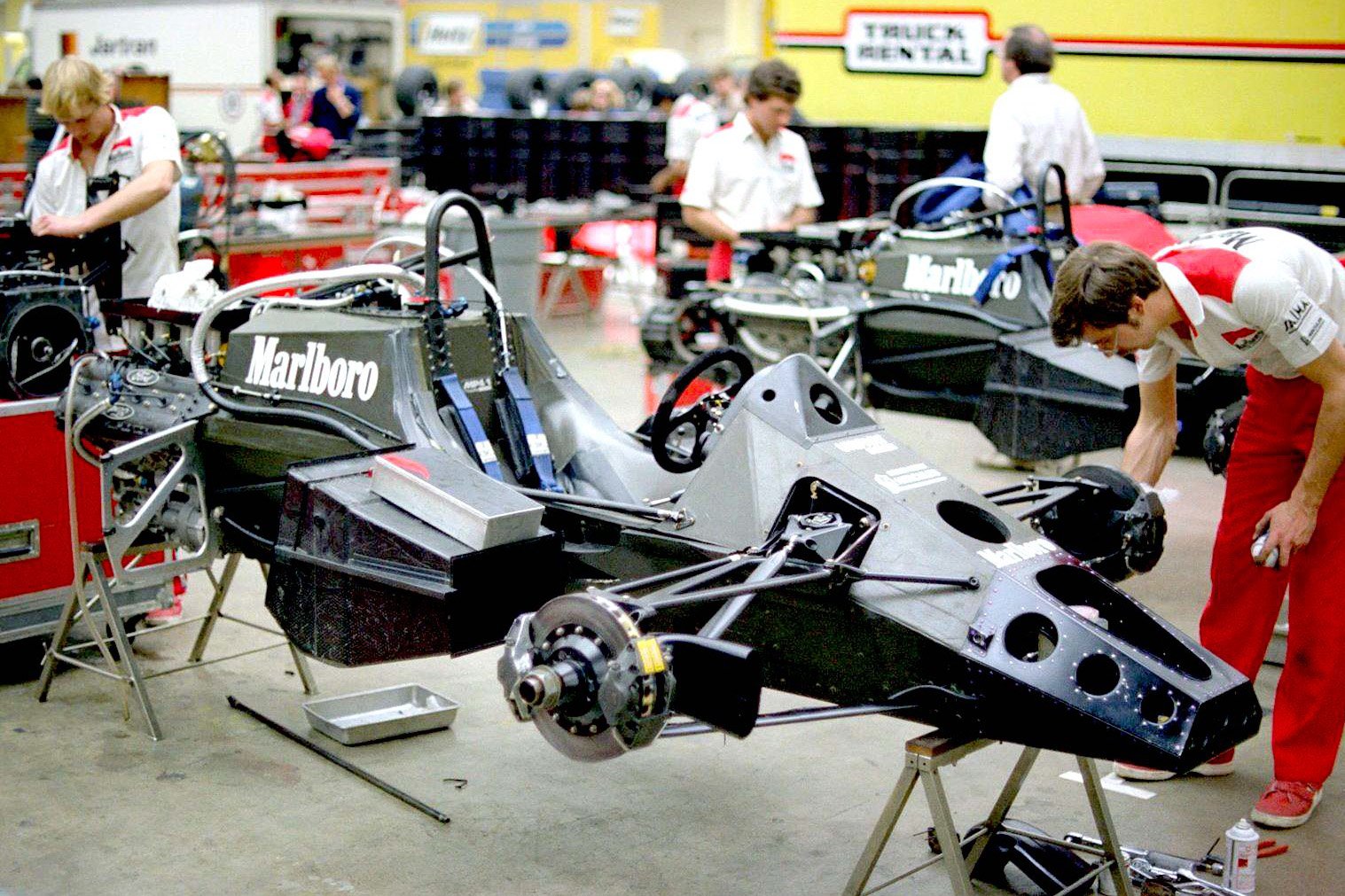 John Barnard went on to become the most successful designer of his time through his McLaren and then Ferrari years with 42 grand prix victories between 1981 and 1995 — only Italian wizard Vittorio Jano could claim more at the time at 47 wins.

Dennis and Barnard’s first Ford-powered MP4/1’s performance versus the might of those mad turbos of 1981-2, will however always go down as a giant-killing performance. (Input & illustration by Patrick O’Brein)