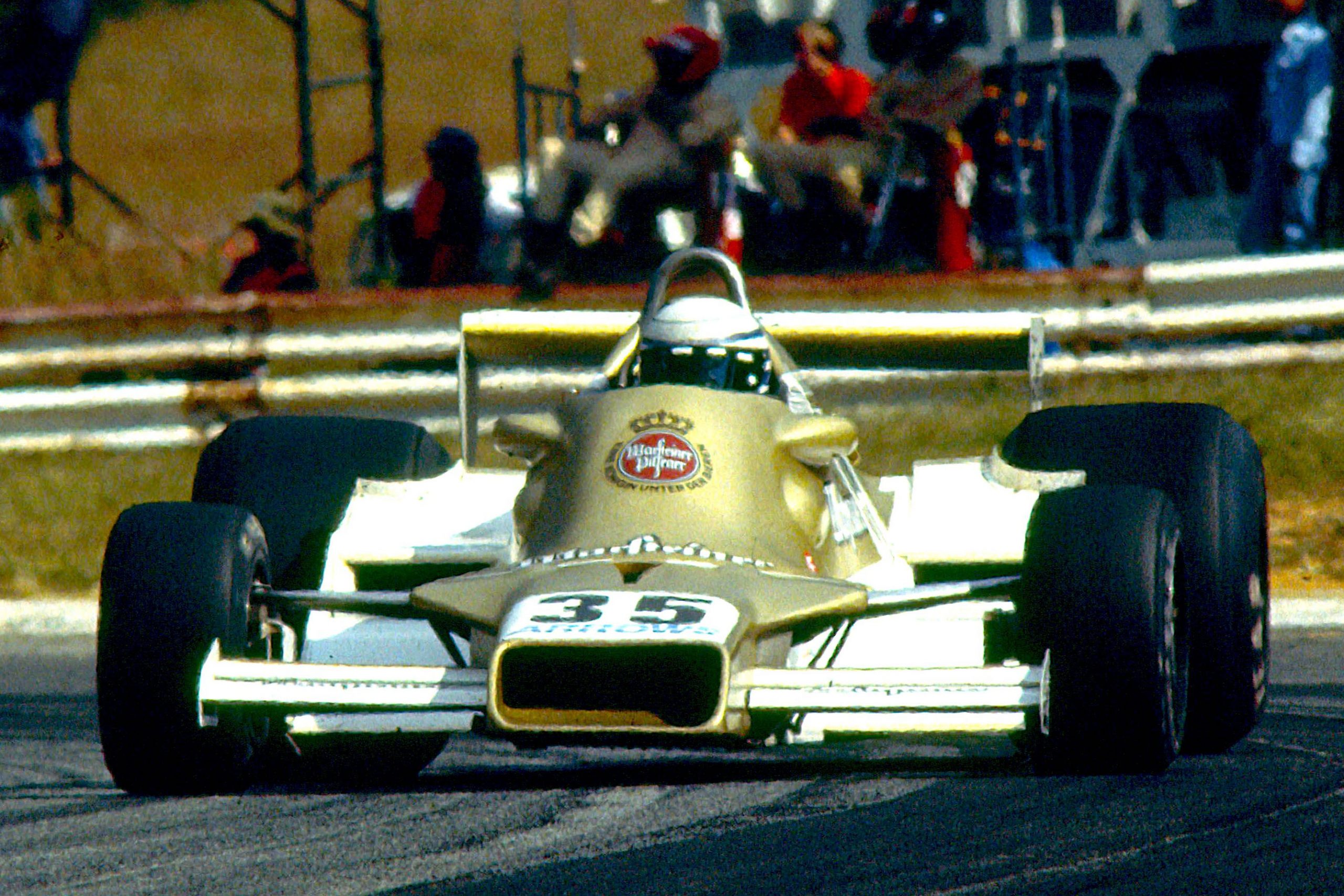 While it never won a race, Formula 1 team Arrows launched this week in 1978 was never far from the spotlight for all the wrong reasons. Even its arrival in F1 was cloaked in a dark shadow, so to say. It was something the oft-controversial team would never quite shake off.

Arrows came to be after Alan Rees, Jackie Oliver, Dave Wass and Tony Southgate along, with key sponsor Franco Ambrosio left their former Shadow Formula 1 team after falling out with founder Don Nichols. The five decided to set up their own team and in November 1977, Arrows, an anagram of their collective surname initials, came to be.

They went as far as to hire former Shadow drivers Gunnar Nilsson and Riccardo Patrese and the FA1 (Ambrosio’s initials) was rolled out at a snowy Silverstone this week in 1978. There were immediate complications however, when Nilsson was diagnosed with cancer. He was replaced by Rolf Stommelen who arrived with the added advantage of a beer truck full of Warsteiner cash.

Despite it being built in just 53 days, the new Arrows FA1 failed to make the season-opener in Argentina. The team got to Brazil however, where Patrese brought the FA1 home tenth on debut. Arrows’ second race in South Africa proved sensational when Patrese’s gold machine (above) took the lead and seemed on course for an unlikely victory, when his DFV cried enough in a cloud of oil smoke down the old Kyalami straight with fifteen laps left to race.

If anyone had not noticed Arrows’ Formula 1 arrival with the FA1 (below) by then, they surely would after what came next. 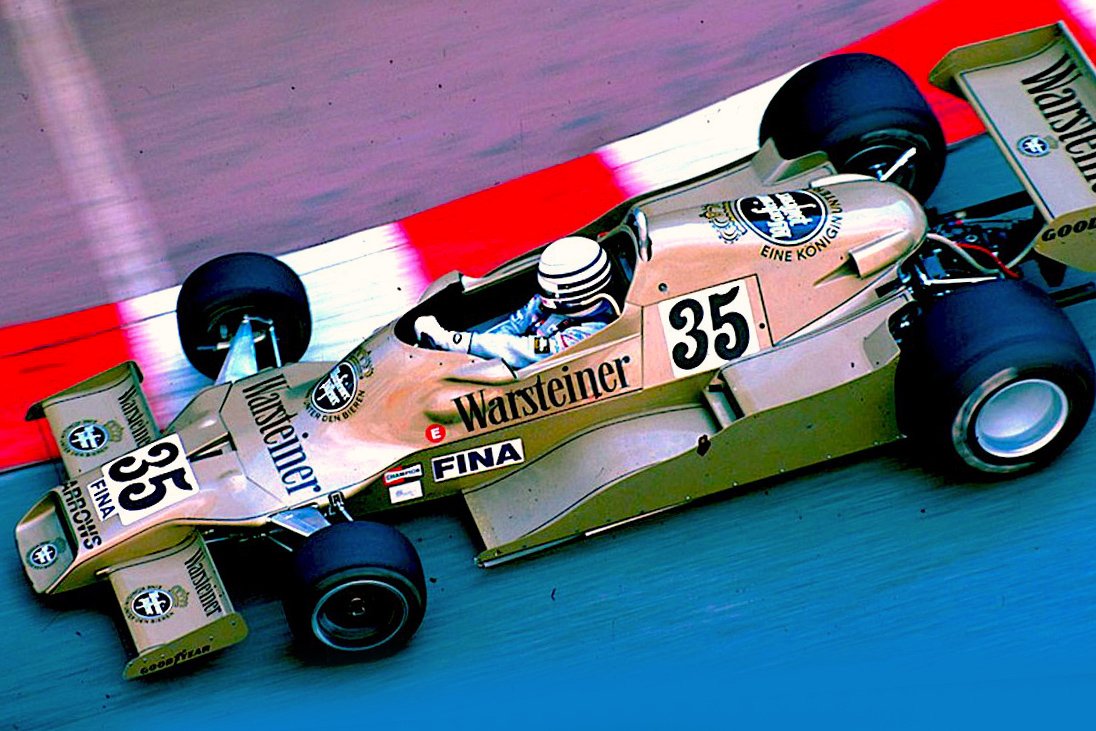 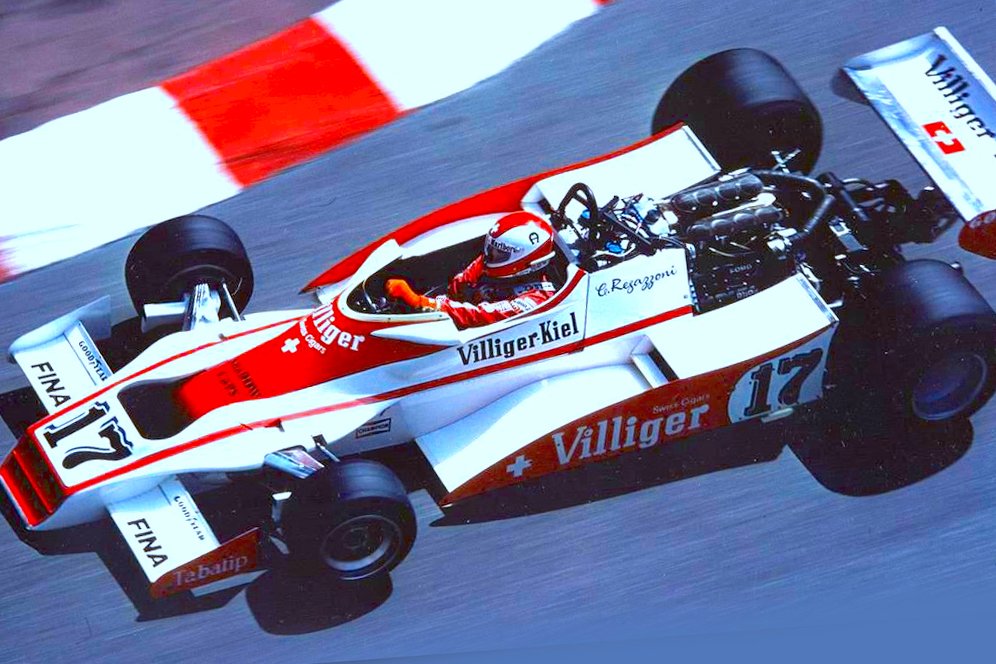 The team’s former employers, Shadow’s all-new DN9 (above) duly arrived late at the non-championship Silverstone International Trophy a couple of weeks after Kyalami. Its car was nothing new. In fact it was all but identical to the Arrows FA1, except its white and red hues!

It was no coincidence either — Arrows designer Tony Southgate had of course penned the FA1 (above) as the Shadow DN9 before marching out of his old team, quite clearly clutching those DN9 blueprints in his fist. And with FA1 dubiously based on the DN9’s intellectual property, the very next thing Shadow did, was to sue Arrows. The hearing was only in August, so the DN9 actually raced against the FA1 through the second bit of the season.

It went well — Patrese scored Arrows’ first points in Long Beach and again in Monaco, before coming in a brilliant second behind Niki Lauda’s equally infamous Brabham Alfa Romeo fan car in Sweden. But then in the London High Court ruled in favour of Shadow, citing that the Arrows possessed more than 40 percent of the Shadow’s concept. And it banned the FA1 from any further participation. 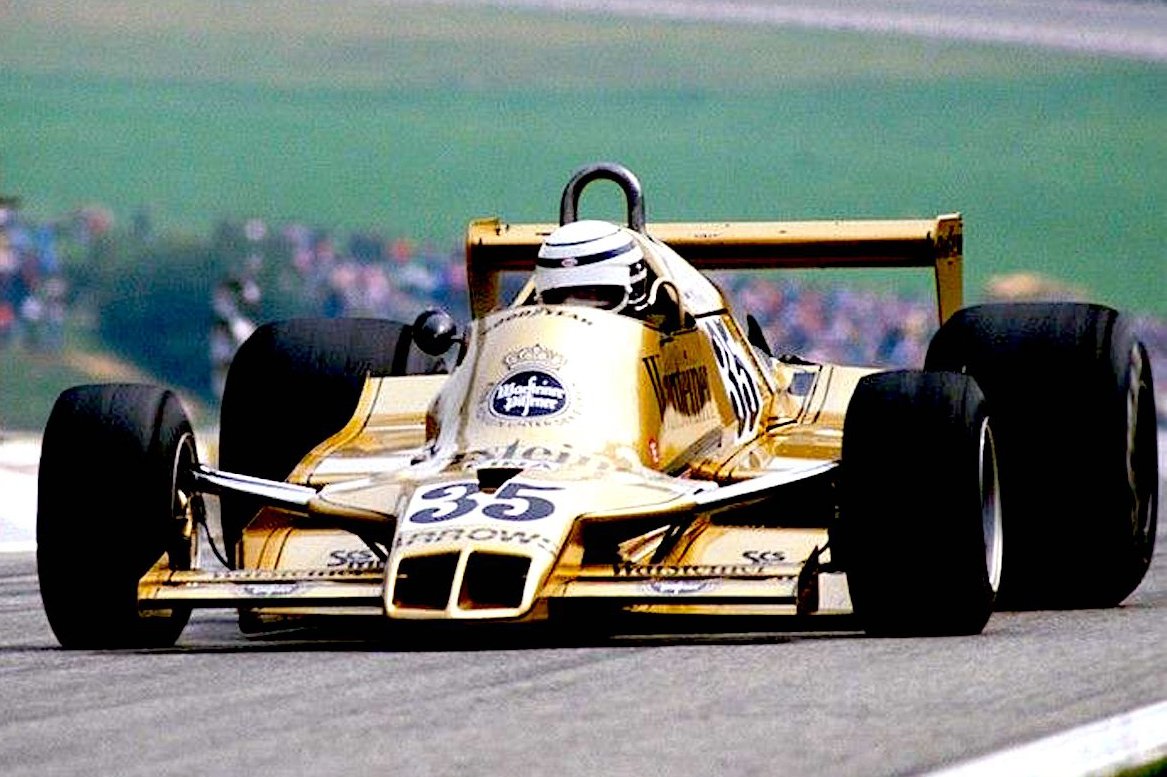 You don’t think Arrows was caught out by that, do you? Of course not!

Well aware of the inevitable, Arrows wasted little time in designing and building the all-new A1. This time it took 52 days and the team tugged the veil off he car just three days after that High Court judgment. The new car debuted in Austria. But wiile FA1 had shown winning potential from the get-go with its DN9 DNA, the rushed A1 was no match, although Patrese did go on to finish fourth in Canada. Stommelen however struggled to even get into qualifying.

In reality, the Arrows A1 used a number of FA1 bits, but the team did hand its redundant banned chassis to Shadow to keep as spare for the identical DN9.

It was not an easy time for Arrows — the new car was called A1 rather than FA2 because Ambrosino had run into cash problems of his own. That led to sponsorship drying up and the end of that relationship too. But building two new cars from scratch in record time also took its toll and the team was against the ropes. 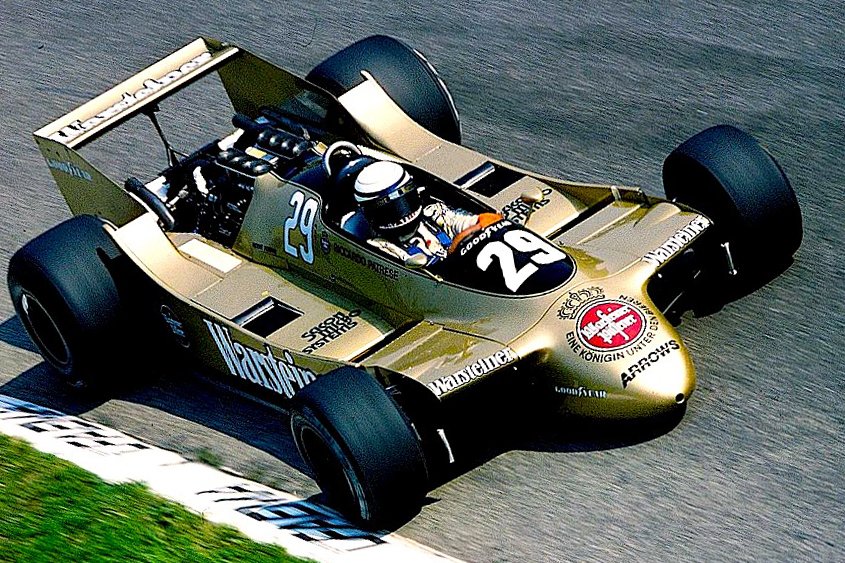 Worse still, poor Gunnar Nilsson’s condition deteriorated through the year and he passed away on 20 October.

Shadow would soon splutter to an end, but the Arrows story went on. Tony Southgate penned the perhaps too radical ground effects A2 (above) for a ’79 season highlighted by five points for Patrese and Jochen Mass, who threatened a third at Monaco. The 1980 A3 proved more competitive — Patrese was second in Long Beach as the team ended 7th in the title chase. The A3 (below) continued in 1981 — Patrese put it on pole at Long Beach and added two podiums with a second and a third. 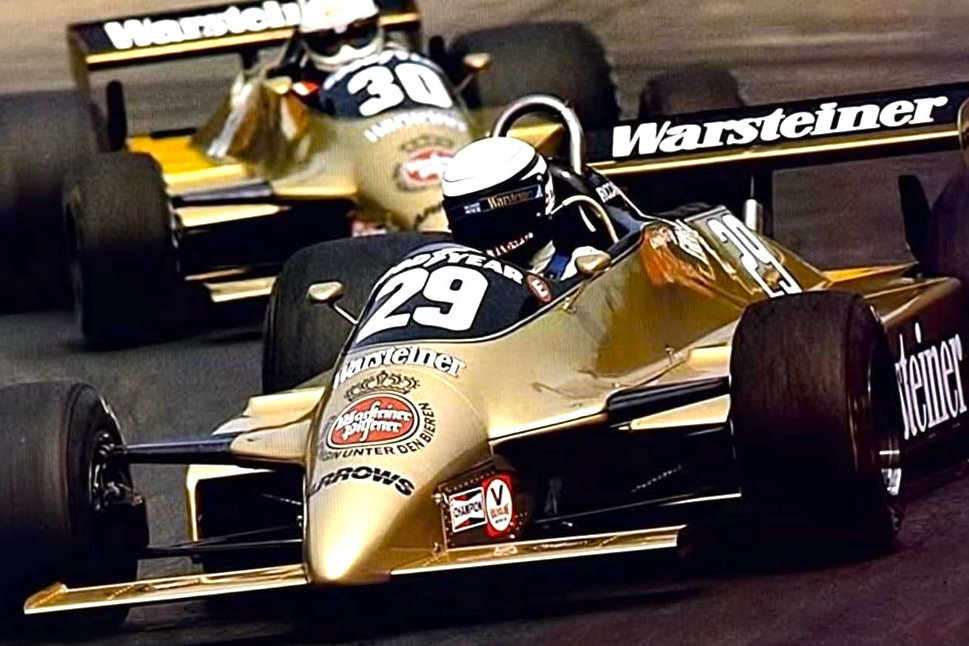 A few lean years followed with the Cosworth DFV powered A4, 5 and 6 and a varied driver line-up including Marc Surer, Mauro Baldi and Brian Henton. They others scored all of nine championship points through to 1983. Arrows then switched to BMW turbo engines for the A7 (below) to come home ninth in the 1984 and 8th in the ’85 Constructors’ Championships. A highlight was Thierry Boutsen’s second at Monaco behind Elio de Angelis after underweight winner Alain Prost was excluded.

But Tony Southgate left and the 1986 season was a disaster after British Aerospace was delayed with the team’s first carbon chassis. Founder partner and designer Dave Wass left after a poor season that mustered a just single championship point. 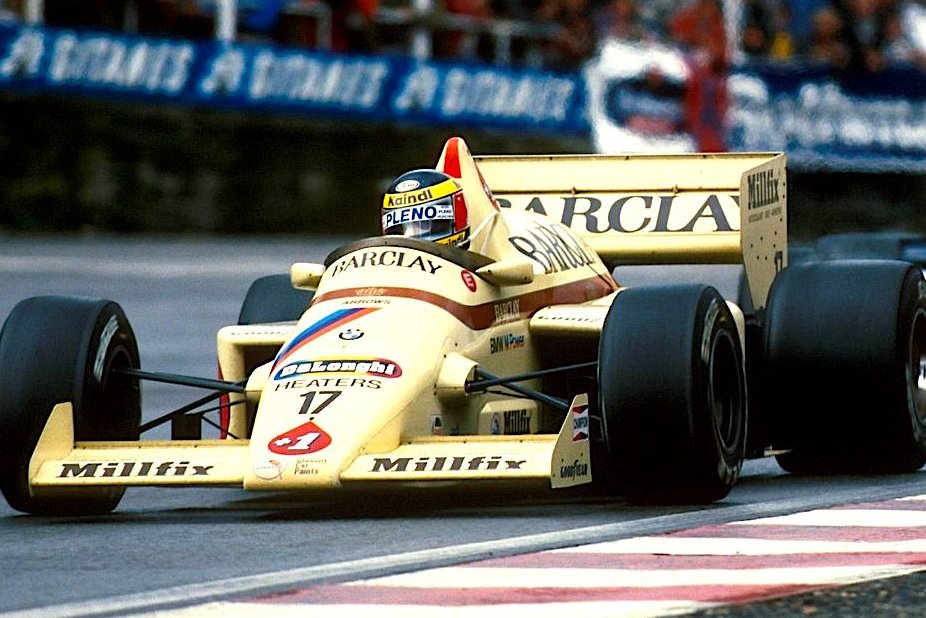 That left Alan Rees and Jackie Oliver in control and they hired Ross Brawn to design the A10 for ’87 with Megatron badged engines after BMW’s exit. Eddie Cheever and Derek Warwick’s regular points finishes saw the team to seventh in 1987 and a best-ever fifth in the 88 Constructors’ championships on a record 23 points. That in spite of issues with the A10B (below) dealing with limited boost as the turbo era came to an end.

Warwick and Cheever stayed to drive Brawn’s A11 Cosworth DFR V8 in 89, which Cheever’s drove to a home town third in Phoenix, while Warwick’s long pit stop put paid to a likely win in Brazil. He also led before losing second to an engine failure in Canada. 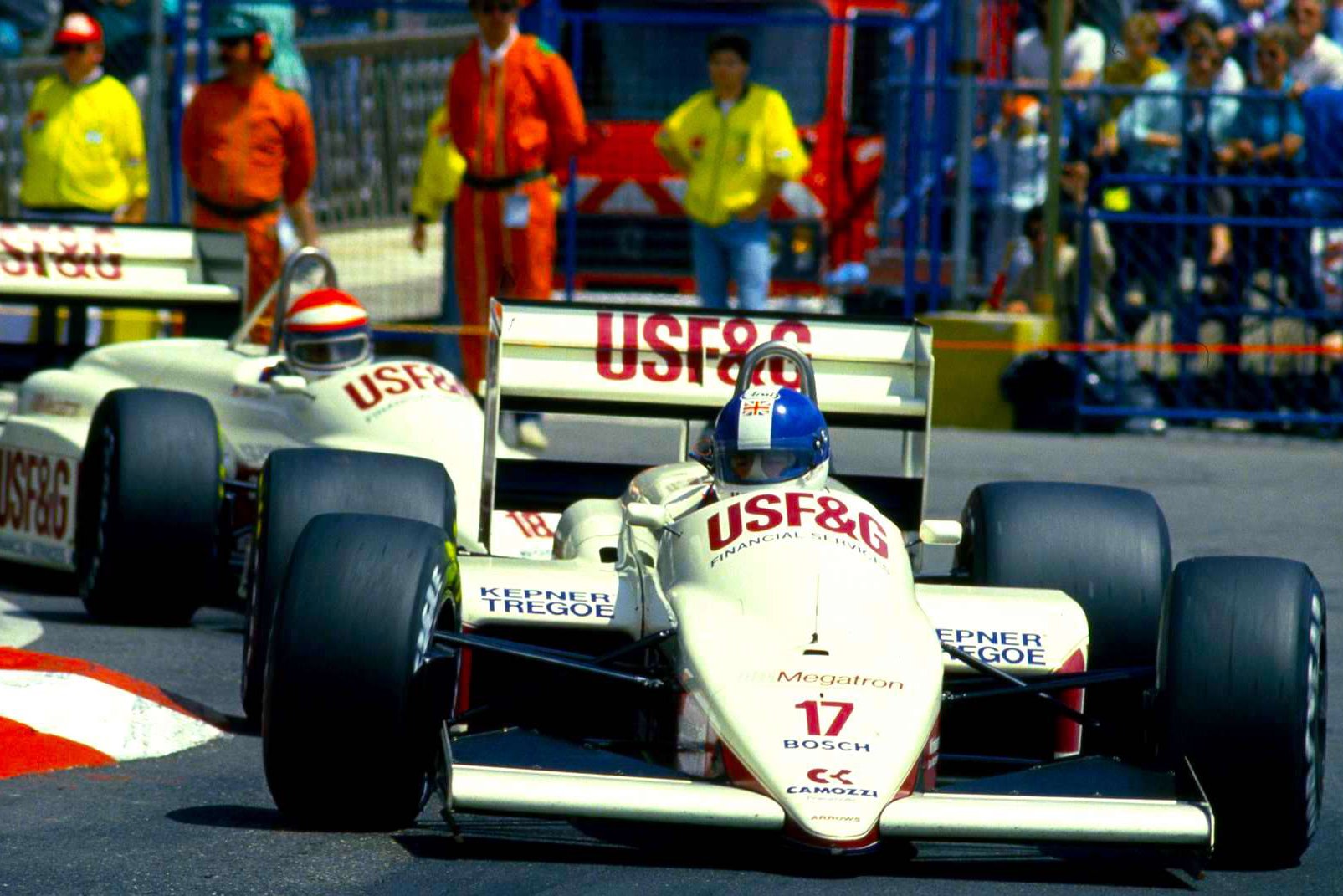 The Footwork era followed as Oliver sold his shares in the team to Wataru Ohashi, but Jackie stayed on as team principal. Alan Jenkins designed the 1990 A11B, with which Michele Alboreto, Bernd Schneider and Alex Caffi could only muster two points. The team was renamed Footwork with Porsche V12 engines in ’91. The engine proved overweight and underpowered and Porsche quit, so the team switched back to Ford V8s. Alboreto, Caffi and Stefan Johansson failed to score points.

The F in the model name was back for Footwork when Jenkins then designed the simple but effective ’92 FA13 for Mugen power, which Alboreto and Aguri Suzuki (below) found six points in and the FA14, that Suzuki and Derek Warwick scored four points with the following year. A strong 1994 season brought several points finishes for Christian Fittipaldi and Gianni Morbidelli in the innovative FA15 Ford, topped by Morbidelli’s second in the Hart-powered FA16 in Australia in 1995. 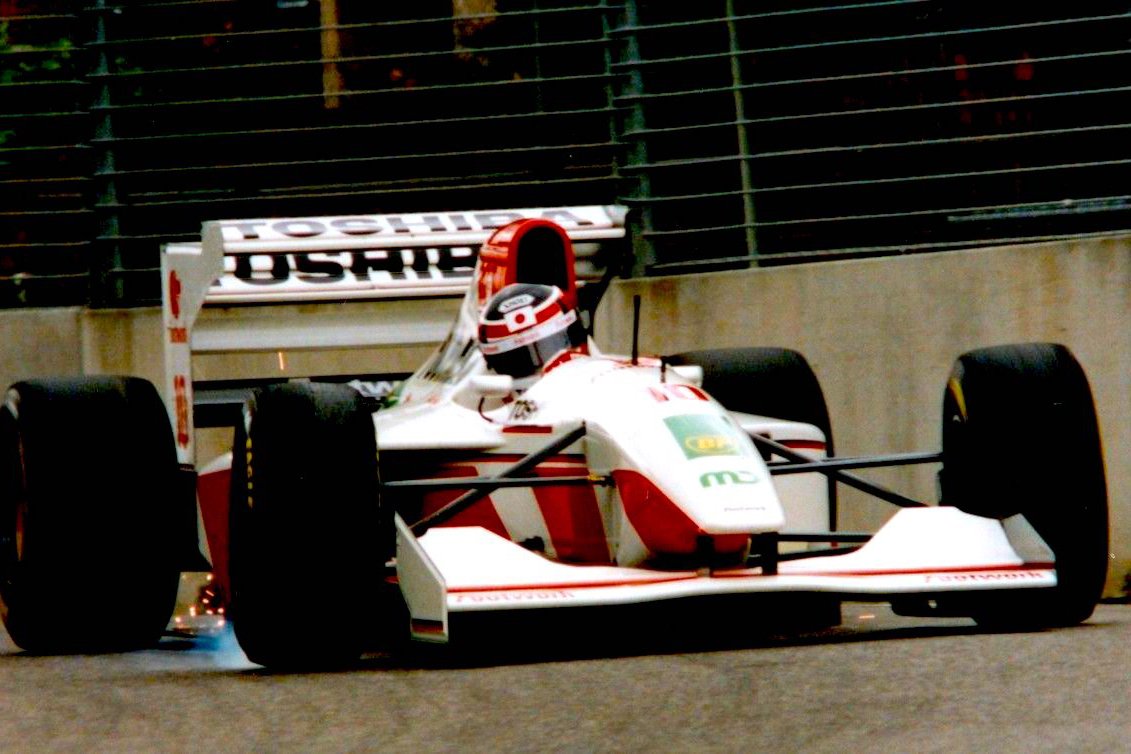 But Jackie Oliver was once again left high and dry as Ohashi-san’s support dried up and Tom Walkinshaw bought 51% of the team from Alan Rees in 1996. Jos Verstappen and Ricardo Rosset struggled through the season before Walkinshaw then dropped the Footwork name and the F from the model nomanclature, and brought Arrows back with Frank Dernie as designer of the A18. He also signed Damon Hill and wealthy Brazilian Pedro Diniz to help pay Hill’s salary, while John Judd prepared the team’s Yamaha V10s.

Arrows once again came so close to score a maiden victory in Hungary in 1997. Hill (below) passed Michael Schumacher for the lead, only to be foiled by a tiny last lap hydraulic seal failure as he limped home second. 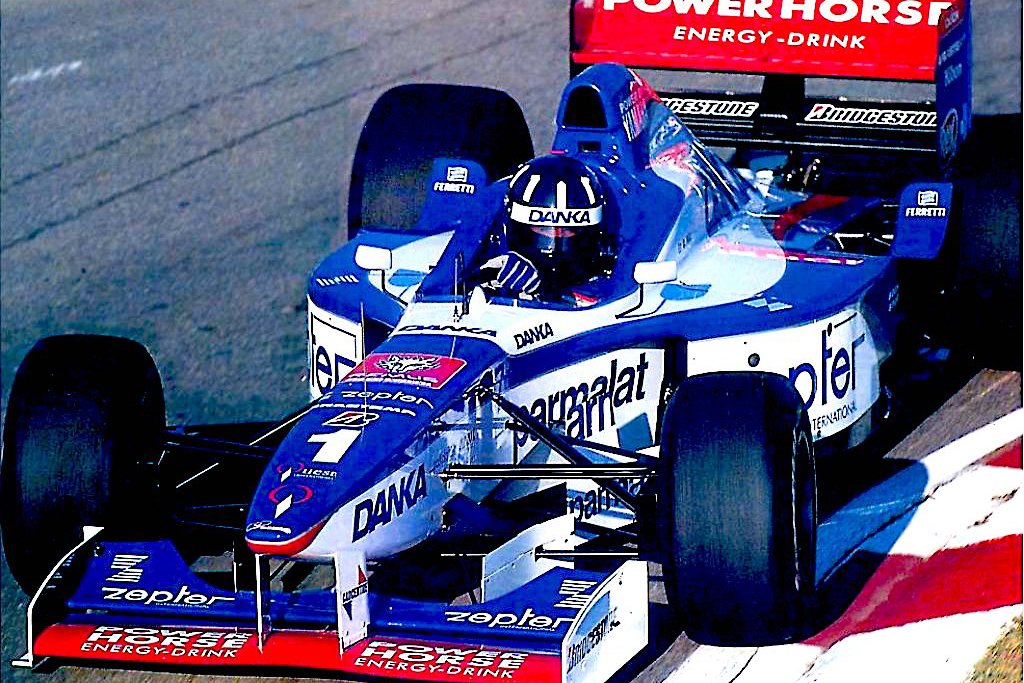 Mika Salo then took over the reins for 1998, when Walkinshaw replaced Dernie with legendary designer John Barnard and Arrows built its own V10 engines after buying Brian Hart’s shop. It was a difficult season highlighted by a fourth and a sixth at an eventful Monaco. Barnard left after clashing with Walkinshaw, who then took complete control as he bought Jackie Oliver out. Mike Coughlan designed the ’99 A20 with rookie Pedro de la Rosa and Tyrrell refugee Tora Takagi buying drives.

Jos Verstappen returned to Arrows alongside de la Rosa in the A21 (below)with rebadged Renault Supertec power for a competitive midfield challenge on 2000. The team swapped again to Asiatech rebadged Peugeot V10s for 2001 after team manager Steve Nielsen and designer Eghbal Hamidy left, while F1 debutant Enrique Bernoldi joined Verstappen behind the wheel, who soldiered to a solitary point in Austria. 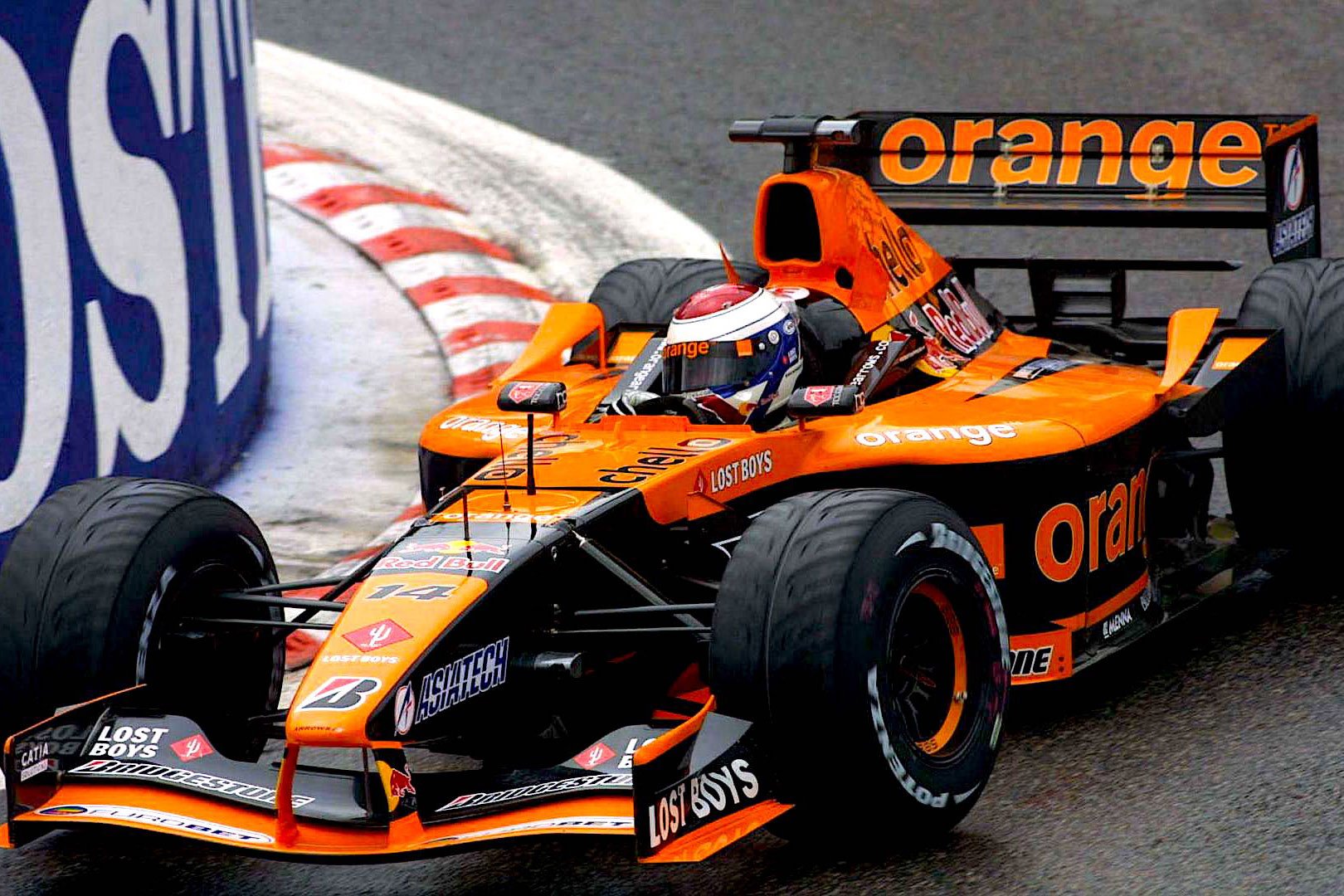 Another swap to Cosworth V10s for 2002 saw Bernoldi joined by Heinz-Harald Frentzen. But Verstappen sued for breach of contract on top of costly payout to Pedro Diniz, who took his funding to Sauber for 1999. Plus a third litigation from Frentzen on his not being paid. Arrows had however run out of money and with mounting debts to Cosworth among others, its drivers deliberately failed to qualify for races the team could not afford to start.

The team went into liquidation at the end of that season and series of convoluted failed and half-deals followed with among others, Craig Pollock, Dietrich Mateschitz and Walkinshaw’s friend Charles Nickerson’s Phoenix Finance. Arrows’ assets were eventually sold to Minardi’s Paul Stoddart, before dissolving into Super Aguri, which eventually itself folded in 2008.

A team that quite literally emerged from the emerged from the shadows, Arrows ultimately suffered a chequered and controversial history wrapped up perhaps poignantly by its inability to ever take the chequers and win a single Grand Prix in 382 starts.

Arrows may have picked up five second places among its nine podiums, but its legacy will rather be remembered by break ups, make-ups and how many times it was sued. Seems nobody has ever counted those.