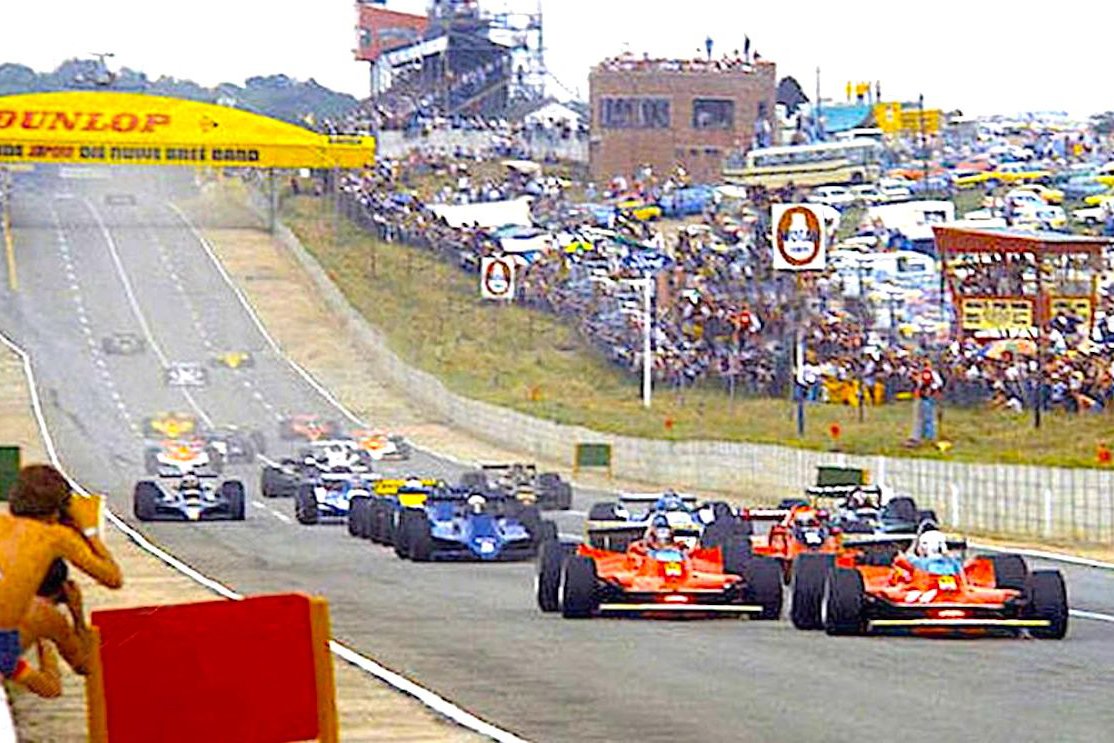 F1 boss Domenicali seems adamant that South Africa should return to the GP calendar. Here’s why such a race makes so much sense

News of new Formula 1 boss Stefano Domenicali this week suggesting the need for the sport’s return to South Africa prompts a look back to a race that was once integral to Formula 1. In fact, there was already a South African Grand Prix many years before Formula 1 was even a thing.

The South African Grand stretches all the way back to 1933 when expat American journalist Brudd Bishop arranged the Border 100 race on a 22 km track around the coastal city of East London. A year later, the first South African Grand Prix was run on that Prince George circuit — that race drew an international entries and was won by Whitney Straight in a Maserati 8CM. (below) 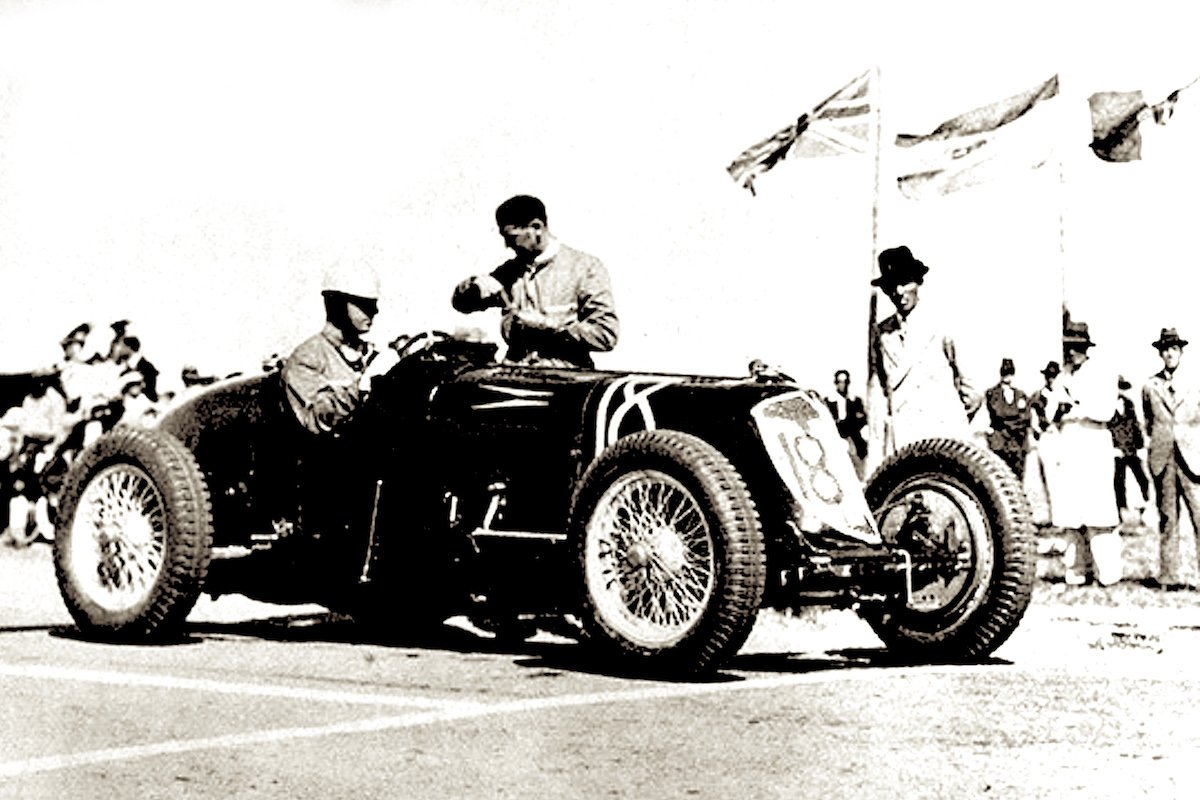 Those early SAGPs were held around New Year’s Day every year, when East London, 1000 kilometres due south of Johannesburg, was bustling with upcountry holidaymakers. A fact that also made the chronology of the race inconsistent as that date occasionally straddled two years and missed a few as well. Italo-South African Mario Massacuratti won the second SAGP in 1936 on a shortened 17km track in a Bugatti 35B.

Pat Fairfield sensationally beat the supercharged V8 Auto Unions in the ’37 race in his little ERA, when tyre wear problems beset Bernd Rosemeyer (blowing out a tyre at the notorious Potters Pass below) and Dick Seaman’s monstrous silver racers . The South African Grand Prix then formed a mini series with other races including the Grosvenor Grand Prix in Cape Town, where mighty Auto Unions shook off those tyre issues for von Delius to win, while Fairfield went on to to the double at the Rand Grand prix in Johannesburg. 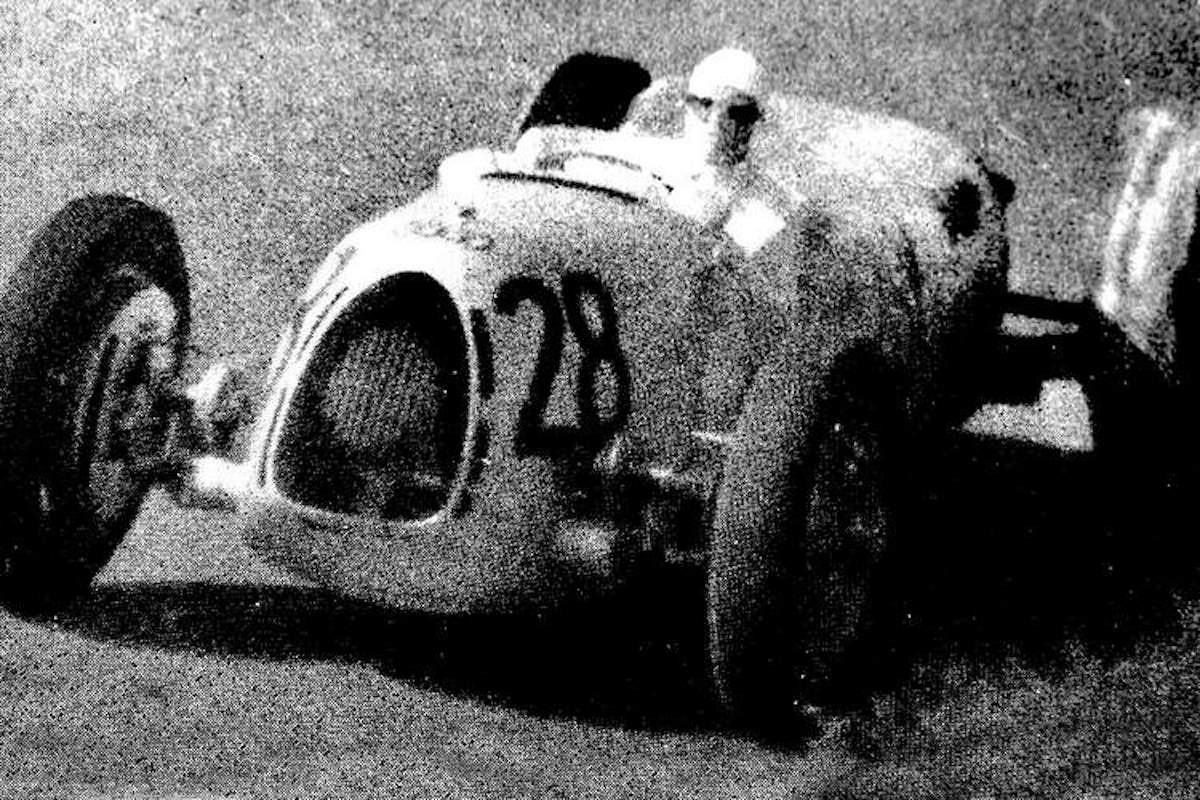 Another local hero, Buller Meyer pulled off another incredible giant-killing win when he beat a platoon of factory Maseratis aboard his splendid Riley special. But the Trident fought back when Gigi Villoresi won one of the last motor races before the outbreak of World War 2 in ’39 race in a Maserati 6CM.

It took fourteen years for the Grand Prix to return to the newly-built 3.9km mile East London Grand Prix Circuit that used a portion of the original track near Potters Pass and is still in use today.

Those non-championship Formula 1 races also drew the cream of the world championship crop to race against the best of South Africa’s homegrown local series F1 racers. Paul Frère won the New Year’s Day 1959 race in his Cooper-Climax, before Stirling Moss won another race run on Old Year’s Eve that year in his Porsche and Jim Clark won his first SAGP in a Lotus-Climax early in 1961. Once again, the SAGP formed part of a splendid African summer Formula 1 series. 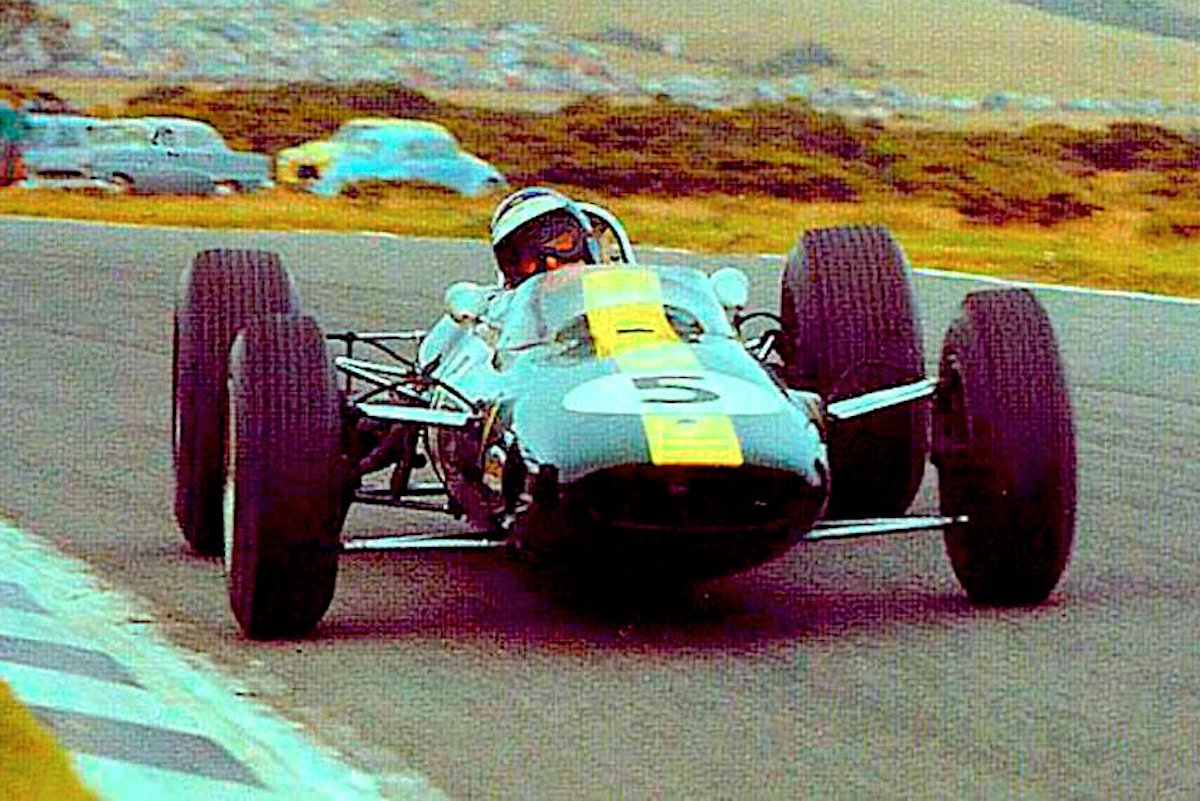 The South African Grand Prix became part of the Formula 1 World Championship in 1962 when Graham Hill won for BRM, before Jim Clark (Above) won two more SAGPs in his Lotus Climax each side of 1965 when the race was not run. The Scotsman’s Lotus teammate Mike Spence won the non-championship race in 1966  to draw the curtain on Grand Prix racing in East London (below). That idyllic beachside Grand Prix circuit however remains a firm favourite among local racers across Southern Africa.

In 1967, the South African Grand Prix moved to the brand new 4.1km Kyalami Grand Prix Circuit built midway between Johannesburg and Pretoria, where local hero and South African champion, Rhodesian John Love kept the capacity crown on its toes when he took the lead and stayed ahead for most of the race until he had to pit for petrol because the tanks of his Tasman-spec Cooper Climax were too small to go the distance. That let Mexican Pedro Rodriguez through to score Cooper’s last race win in his Maserati-powered machine, from Love. 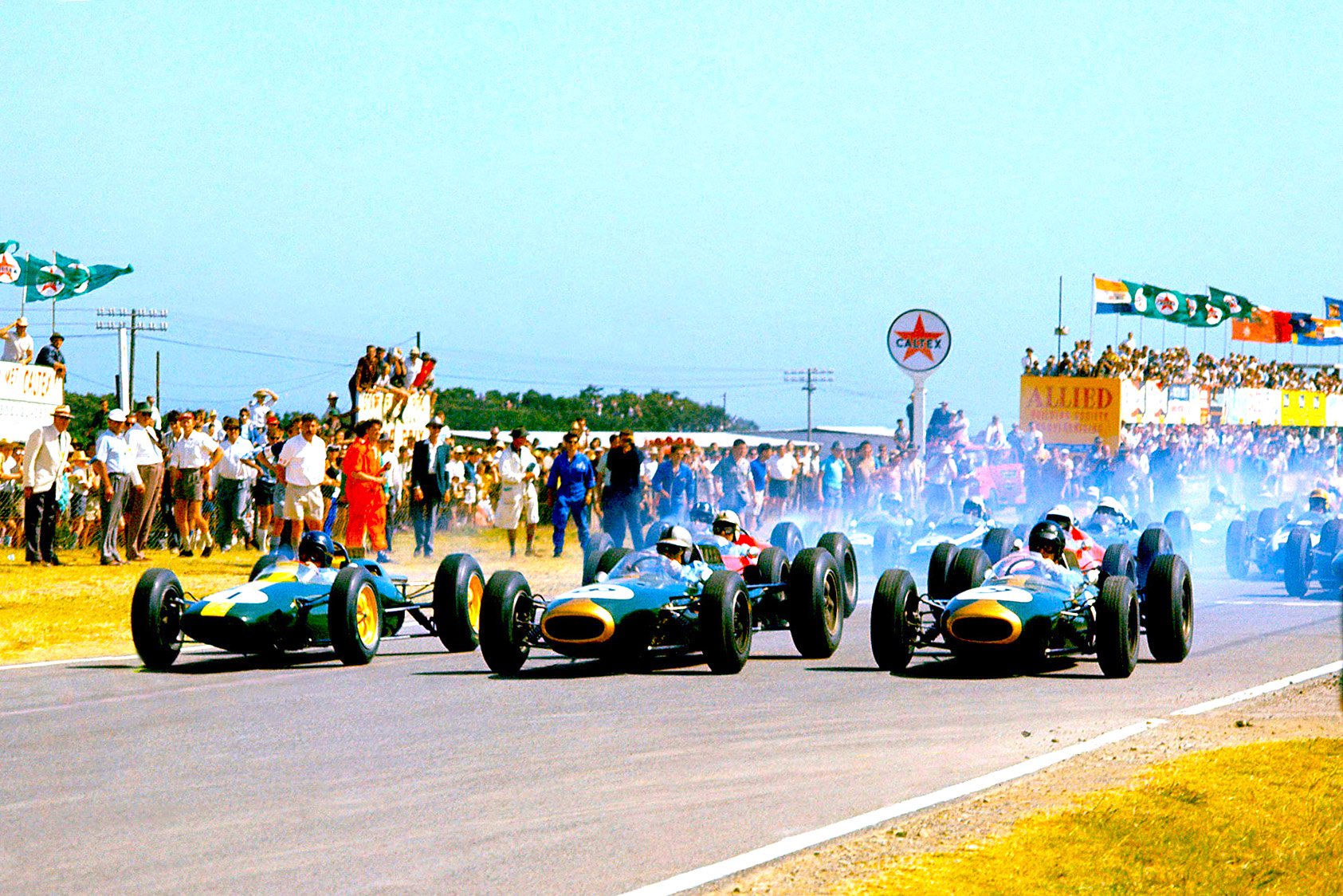 Jim Clark won his fourth SAGP in his Lotus-Ford on New Year’s Day 1968, his final Grand Prix win before his untimely death. Traditionally run on a Saturday rather than a Sunday, the South African Grand Prix moved to a new first weekend of March date from 1969, when future 3-time world champion Jackie Stewart surprised to win in his Matra Cosworth, before former triple champion Jack Brabham took his last GP win in his Brabham-Ford in ’70.

Another future champion Mario Andretti won his first GP for Ferrari in ’71 and ’67 champion Ferrari Denny Hulme scored his final GP win for McLaren in ’72 (below). Hulme scored his only ever F1 pole position for the 1973 SAGP before Jackie Stewart steered his Tyrrell to victory and Argentine Carlos Reutemann won for Brabham in ’74. A South African finally won a world championship South African Grand Prix when young East London star Jody Scheckter drove his Tyrrell to the 1975. 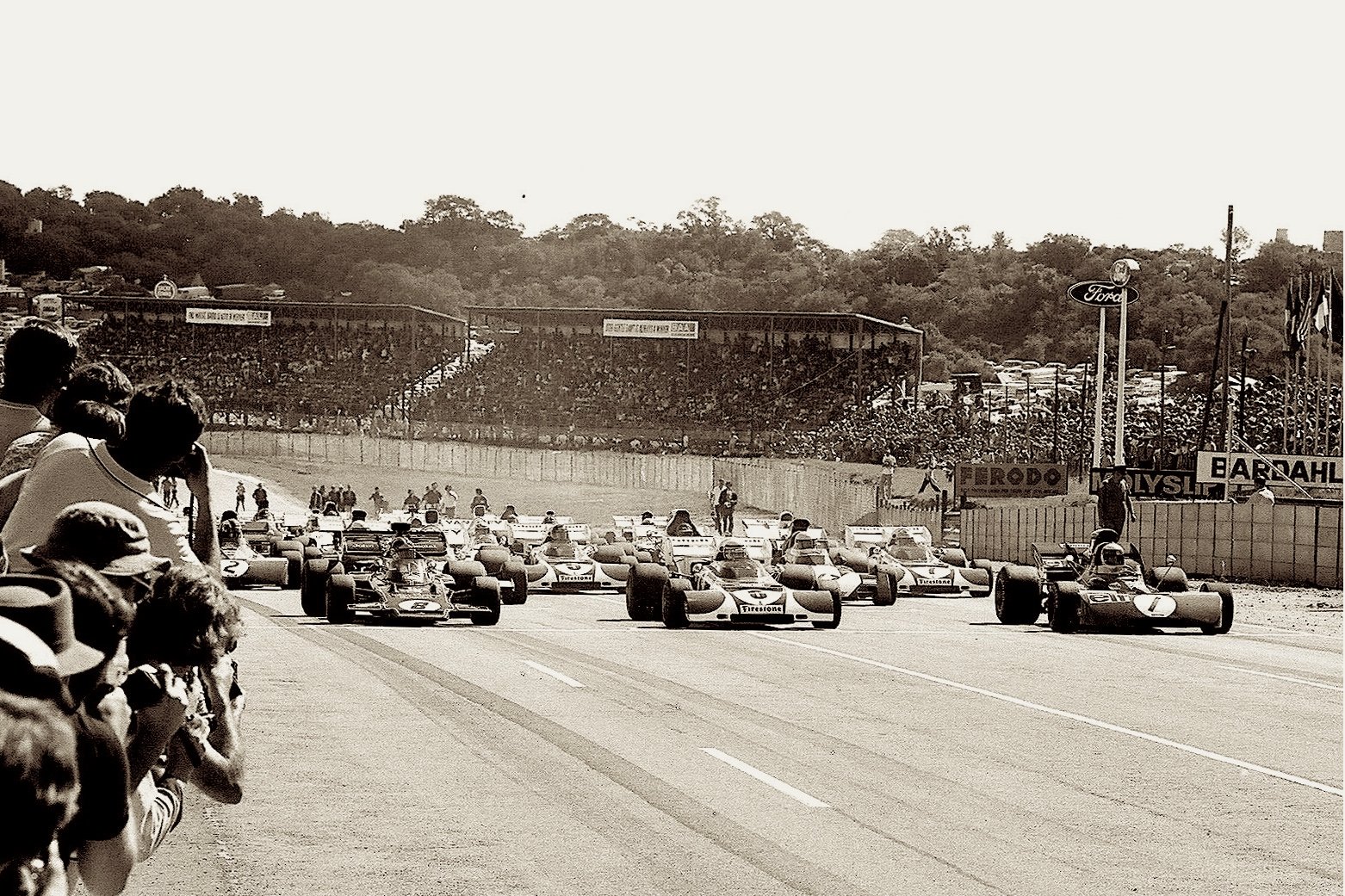 Niki Lauda scored back-to-back SAGP wins for Ferrari. Lauda’s ’77 win was his first after his fiery accident at the Nurburgring, sadly marred by the death of Welshman Tom Price and Kyalami marshal Frederick Janse van Vuuren in a tragic accident late in that race.

Swede Ronnie Peterson pulled a last lap move on Patrick Depallier’s Tyrrell to steer his Lotus to the ’78 win before Gilles Villeneuve held Ferrari teammate Jody Scheckter and the Renaults off to the 1979 win (top). Scheckter would become South Africa’s only Formula 1 World Champion later that year before Frenchman René Arnoux used the advantage of his Renault’s boosted turbo power in Kyalami’s thin 1.6km altitude air to win the 1980 race. 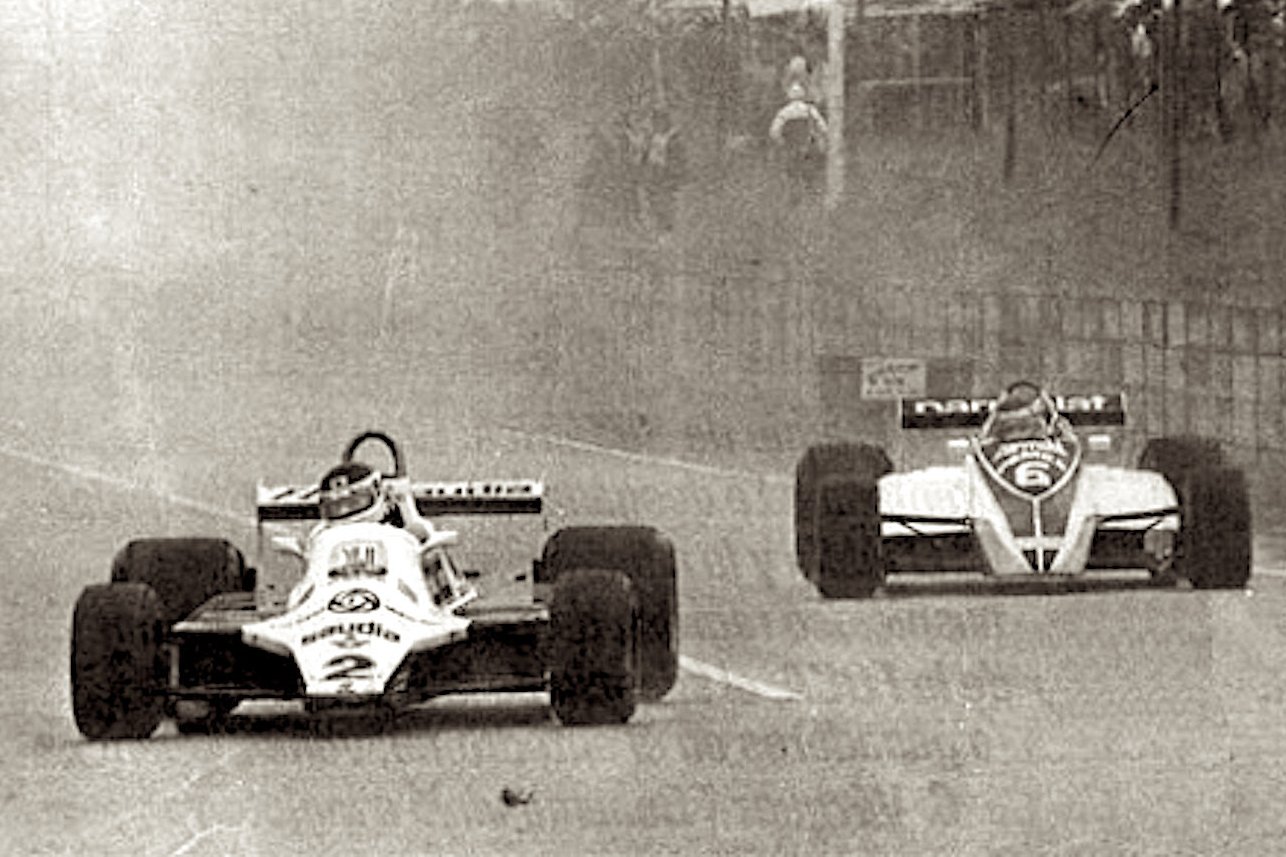 The 1981 South African Grand Prix did not count toward that year’s World Championship after Ferrari, Renault and Alfa Romeo sided with the FISA camp and boycotted the race won again by Carlos Reutemann (above) for his FOCA-supporting Williams team, as the war between the two F1 factions came to a head, thirty years ago this week.

All was sorted by 1982, but that year’s South African race was highlighted by the GP drivers going on strike! All was however resolved in time for Alain Prost to win that year’s GP for Renault.

The SA Grand Prix moved to the end of the season for 1983 and that brought its own controversy as race winner Riccardo Patrese’s teammate Nelson Piquet took the title by finishing third amid questions around the legality of his Wlliams-BMW’s fuel. Niki Lauda took his third South African Grand Prix win for McLaren-Porsche in 1984 and Nigel Mansell won it for Williams-Honda in 1986. 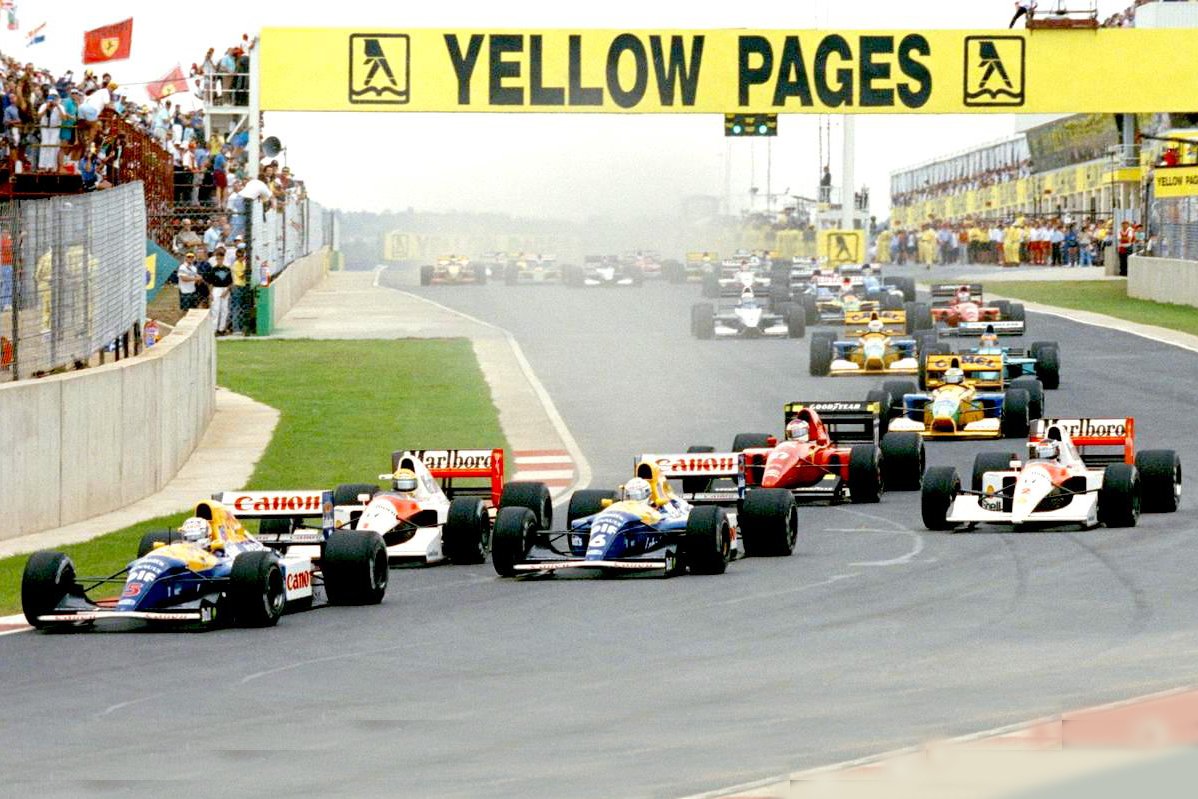 The great old Kyalami Grand Prix Circuit was then broken up, with the old main straight and the Leeuwkop and Crowthorne corners sold off to a commercial project and a new track built to the southeast.

There were no grands prix there until SA returned to the World Championship in ’92, where Nigel Mansell picked up where he had left off at Kyalami to steer his Williams-Renault to that 1992 victory (above). Alain Prost returned to F1 to win the final 1993 South African Grand Prix for Williams-Renault against past and future champions Senna and Schumacher (below) and Damon Hill. 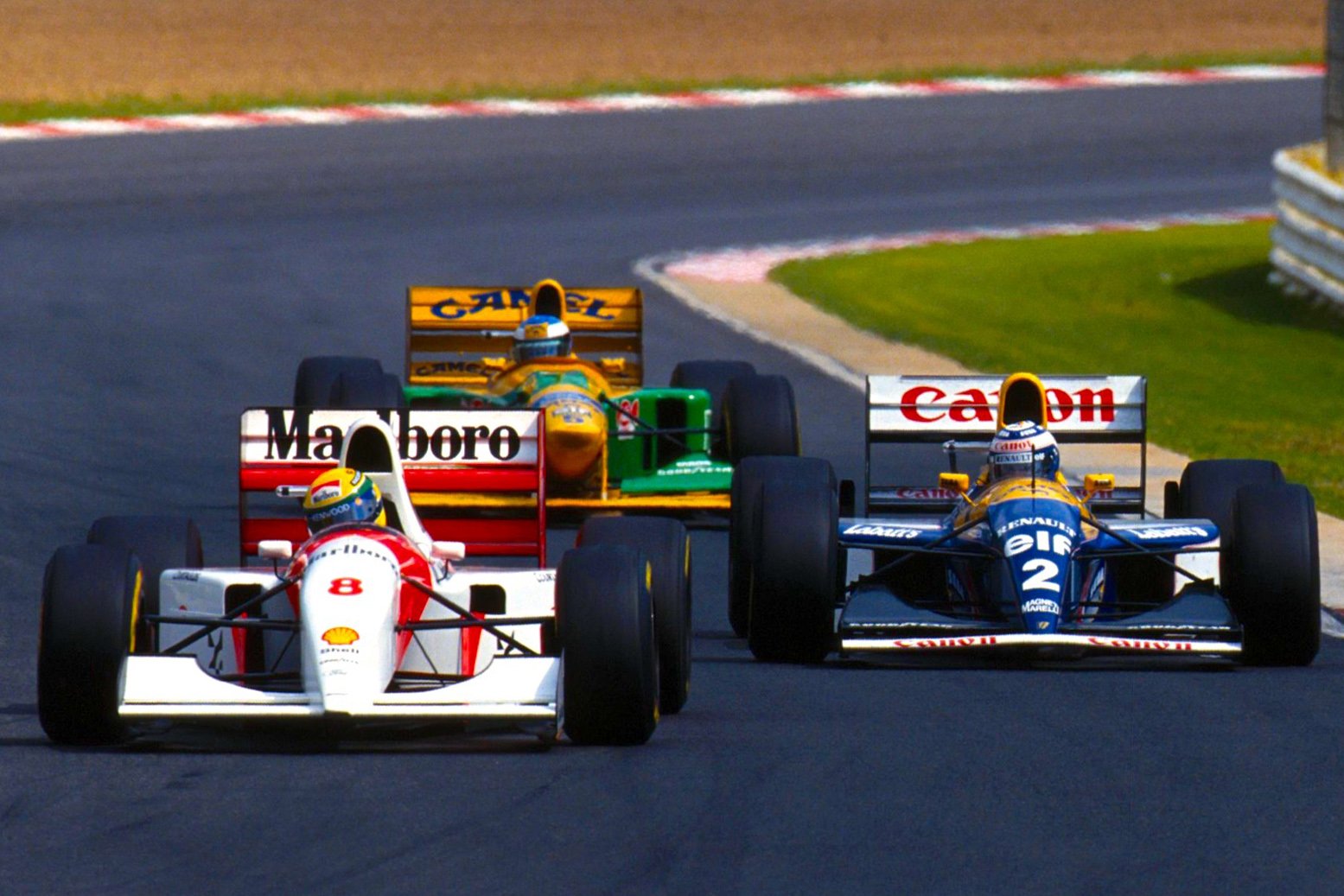 Kyalami has remained intact and was five years ago acquired on auction by local Porsche distributor Toby Venter, who completely restored, renovated and lengthened the circuit, which while it is not F1 graded, ‘will not take very much to achieve Formula 1 specification’ according to Venter.

The Johannesburg businessman has never hidden his desire for his circuit to host a Grand Prix again, and Kyalami last year hosted its second rejuvenated 9-hour as the ICGT Challenge finale — among the only international flyaway races through locldown. The Coronavirus however put plans for a Kyalami World Endurance Championship 6-hour this month, on ice.

There have been several attempts to bring a South African Grand Prix back since 1993 including two plans in Cape Town as well as various apparent Kyalami efforts, but Domenicali’s comments this week on top of Lewis Hamilton’s pleas for an African race last year and the ongoing efforts of the Jody Scheckter-led South African GP initiative are just the latet tangible sign that a Grand Prix could very well be back on the cards in South Africa…