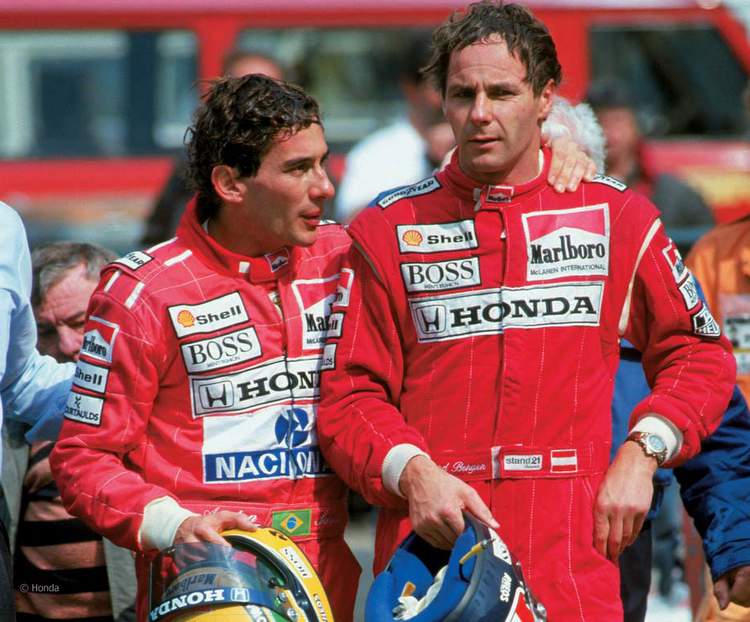 Gerhard Berger can joke about how he plagued Formula 1 legend Ayrton Senna with frogs, and tossed the Brazilian’s briefcase out of a helicopter over Monza, but there comes a point in every tale where the laughter stops.

Triple F1 World Champion Senna died after crashing at Italy’s Imola racetrack 25 years ago on Wednesday and Berger is wary of too much focus on the pranks that framed their friendship.

“We had bloody hard racing at the time. Really hard,” the Austrian, a winner of 10 grands prix and survivor of a fiery crash at Imola in 1989, told reporters at a recent lunch.

“And then just to remember frogs, you feel no good. I’m happy to tell (the story) sometimes, but in general when I think about Ayrton I like to think about this era — maybe the best era in Formula 1.”

The well-polished practical jokes played by the pair, McLaren team mates from 1990-92, are very much part of the legend, however, and still raise a laugh when Berger relates them.

The Austrian once said he taught Senna how to laugh, and the Brazilian showed him how to drive.

An old favourite is the tale of how Senna’s passport photograph was replaced with a pornographic image, then unwittingly presented to immigration. Questioned later by police, Berger blamed Senna’s old rival Alain Prost.

The frogs appeared during a holiday in Australia with Senna, McLaren boss Ron Dennis and then-wife Lisa.

“I went running in the evening and there was this golf course and these big things jumping around. So I went to the concierge, gave him $100 and said bring me some,” grinned Berger.

“He brought me a whole bag full. I think 50. So I asked Lisa Dennis to help me. We had dinner and I picked up Ayrton’s room key and we went to his room and put these bloody frogs everywhere.”

Berger’s follow-up, when a furious Senna confronted him the next morning, was to enquire: ‘And where did you find the snake?’.

The Austrian was racing for Ferrari at Imola, qualifying third with Senna on pole for Williams, on the fateful May 1.

The weekend was already a grim one, with the death of Berger’s compatriot Roland Ratzenberger in qualifying and Brazilian Rubens Barrichello crashing heavily on the Friday.

But Berger also remembers a smile in the midst of it. “As a Ferrari driver you always bring the big style in Imola and I remember the people were all shouting. I was out of the car and he (Senna) was still in the car, he was laughing under the helmet. So that was my last eye contact with him.”

After a safety car period, Senna crashed at Tamburello — where Berger had his accident — while leading Michael Schumacher’s Benetton. Berger, driving past, saw nothing to worry about.

“When they stopped the race, (former F1 supremo) Bernie (Ecclestone) came and said ‘well, he’s out of the car’ and in our language, ‘out of the car’ means he’s OK. So I didn’t even ask,” he recalled.

The race re-started and Berger retired soon after. Back at the garage, the Austrian was stunned to hear Senna was fighting for his life. He and fitness trainer Josef Leberer flew to the hospital in Bologna and were invited in to the operating theatre.

“They were still doing something on his head so it was covered. Honestly I think he was dead already,” said Berger. “We stood in front of him for a while and then we left.”

Berger considered his future and was back on track in Monaco two weeks later.

“These things are all very hard. You lose a colleague and in this case I lost a friend. But on the other side we all know that in our sport, at this time, this happens and you have to cope with it,” he said.

Williams, with star designer Adrian Newey, won the 1996 and 1997 championships. Berger has no doubt that had Senna lived, the record books would have looked very different.

“Racing is racing, and it went back to normal quite soon,” he said. “But sometimes I would think and say ‘If Ayrton would be still in the Williams when the Newey time came… I don’t think you would see for five years any of the others winning’.

“His dream was always to go to Ferrari,” added the 59-year-old, who now oversees the DTM German Touring Car series that starts at Hockenheim this week.

“He always told me: Gerhard, I want to be one day in Ferrari but I just have never seen the moment where they have been good enough that I know I can deliver.” (Originally published on GrandPrix247)