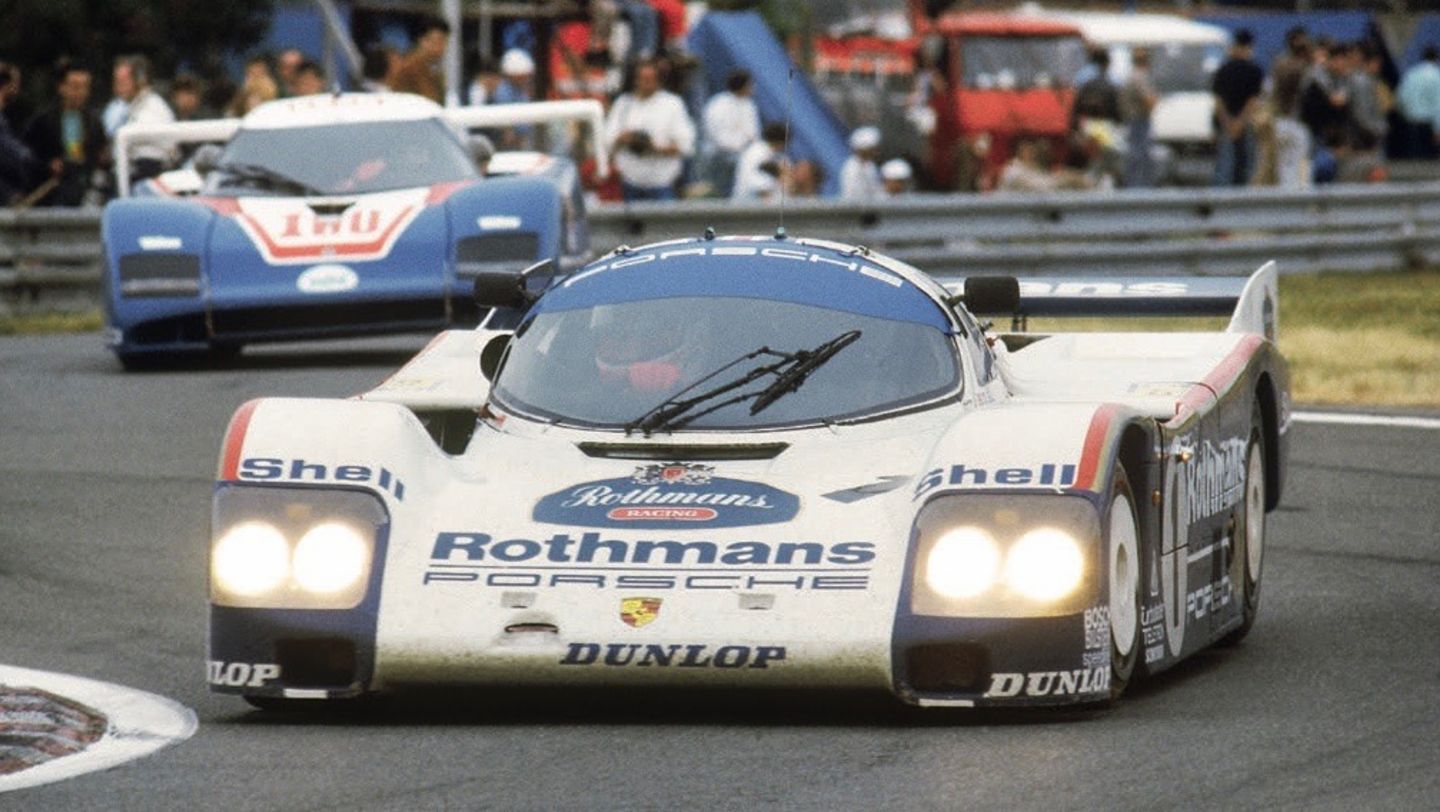 Porsche and Le Mans have always been a family affair. This was also the case with the first overall victory exactly 50 years ago. Dr. Wolfgang Porsche remembers. 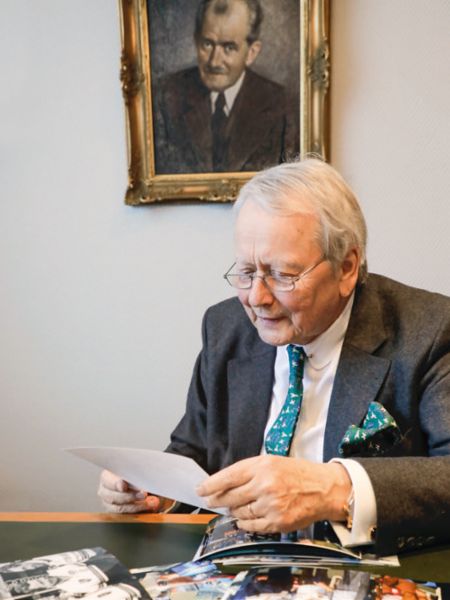 Nothing has changed. It feels like a time capsule. The furnishings exude the flair of Germany’s Wirtschaftswunder—the miraculous postwar economic recovery when Porsche grew from a small family enterprise to a sports-car company of worldwide renown. Successful showings at Le Mans played a key role in its rise.

Lined with dark green leather, the executive desk is currently covered with seven decades’ worth of photos of Le Mans. Dr. Wolfgang Porsche’s eyes sparkle upon spotting himself as a thirteen-year-old on the pit wall with his father in 1956. “Of course I loved to accompany him,” he says.

“But I wasn’t allowed to go every time because the race was always held during the school year.”

Skipping school was not exactly an option, even in the race-crazy Porsche household. The entire family would go more regularly to the Nürburgring for the German Grand Prix, which was often held during summer vacation.

The photos of Le Mans are also a journey back in time for Wolfgang Porsche, who’s now seventy-seven. They show glimpses of different periods of his life up to the present day.

A photo taken in 2017, for example, reveals not only how the young teenager has changed since the 1950s but the changes in the world of motorsports as well. It shows Wolfgang Porsche in the control room. In the twenty-first century no one sits on the pit wall with a stopwatch and handwritten charts.

Instead, engineers sift through enormous volumes of data on their monitors to develop the best strategy for the twenty-four-hour race.

“The rainstorms at night were extraordinary. At times the water shot straight across the track. It was incredibly dangerous.”Dr. Wolfgang Porsche

But the inimitable magic of the classic endurance contest remains unchanged – for Wolfgang Porsche as well. “For me it’s not just about being there but supporting the entire Porsche team,” he says. “I suffer through the mechanical issues and am thrilled when we succeed.” 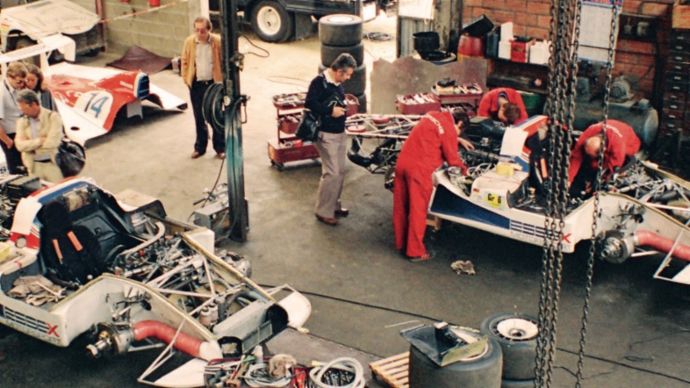 1979: “The Porsche team used the garage in Teloché for decades. It had a family-like quality to it, and friendships developed with people in the town. The neighbors were always stopping by to visit. It’s unthinkable today.”

“The atmosphere at our workshop was both casual and highly professional.”

Porsche has had all manner of tragedies and triumphs in Le Mans, and no manufacturer has been more successful on the course near the Sarthe River. The photos reveal an unparalleled devotion to the iconic race. 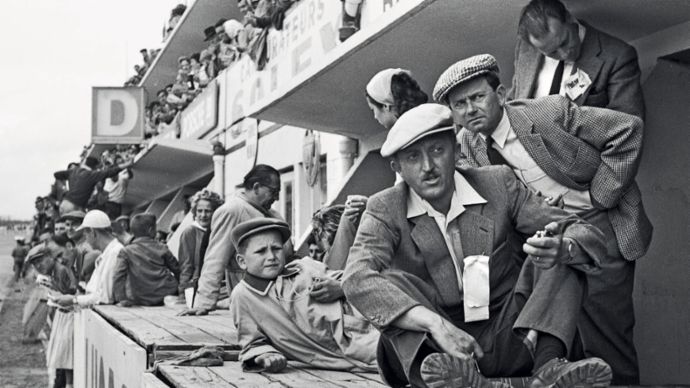 1956: “My father was really excited every time he headed off to the race with our factory director Hans Klauser, who’s on the right in this photo. You could feel how happy they were.”

Since the very first appearance of two modified Porsche 356s in 1951, no year has passed without the presence of Porsche race cars driven by factory or customer teams. Which is why Le Mans is also known as “Porsche’s living room.” 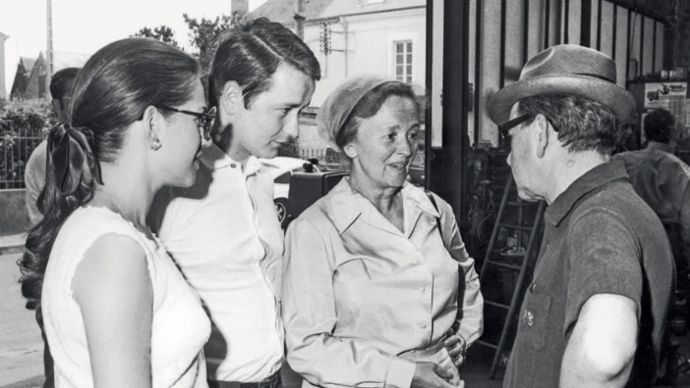 1970: A rare visit of his mother Dorothea Porsche to Le Mans

In a photo from 1970, Wolfgang Porsche spies his mother Dorothea, who didn’t regularly attend the epic race, next to his father, Ferry. That was the year of the eagerly awaited first overall Porsche victory by Hans Herrmann and Richard Attwood in the 917 short tail.

A car and an event that Wolfgang Porsche will never forget. That win was a “phenomenal milestone,” he says. “It was the first time we showed we could beat the really big names. It was a breakthrough on the international stage.” 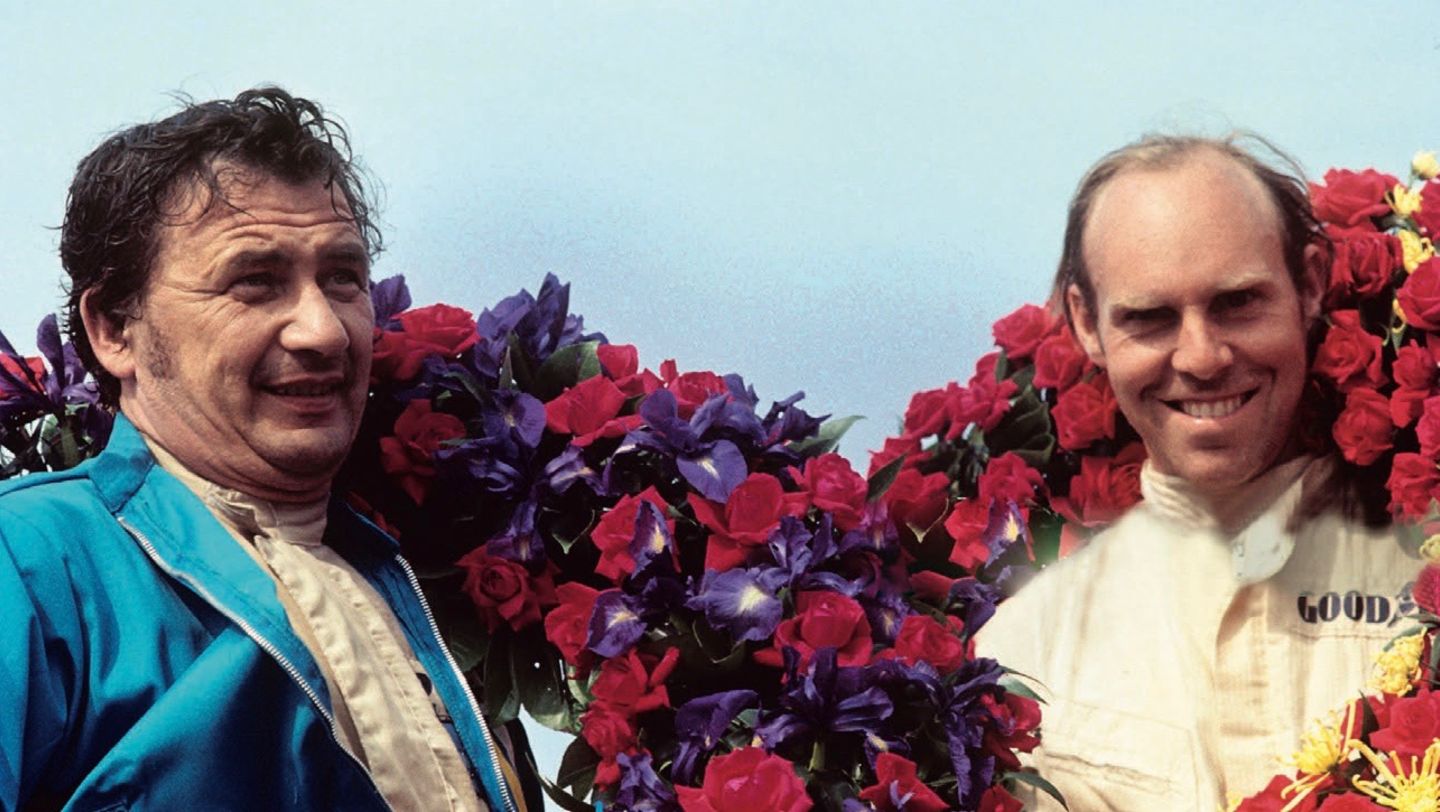 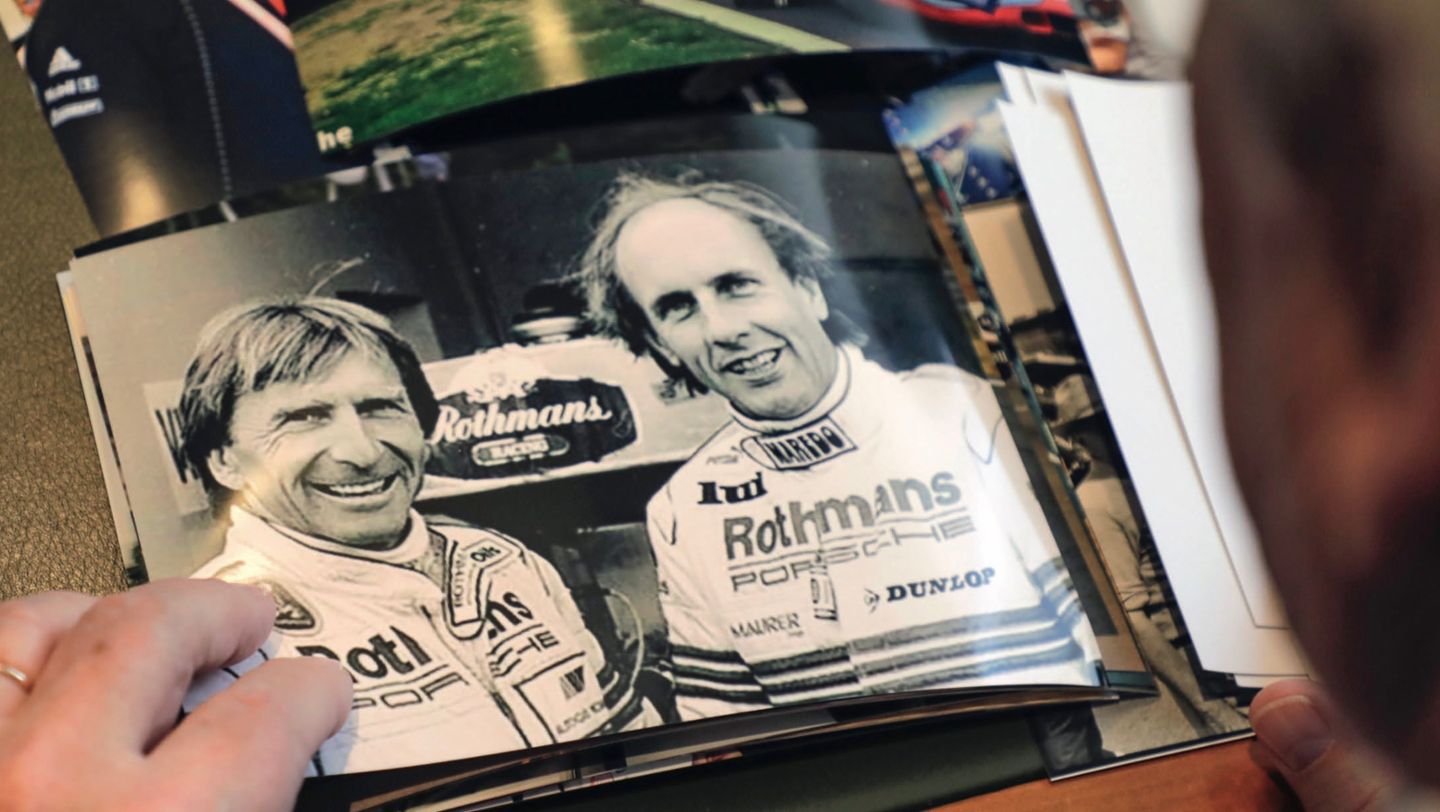 (…) Especially Jacky Ickx, Derek Bell, Jochen Mass, and of course Hans-Joachim “Strietzel” Stuck. Strietzel is still good at anything he touches and his cheerful nature is infectious.” 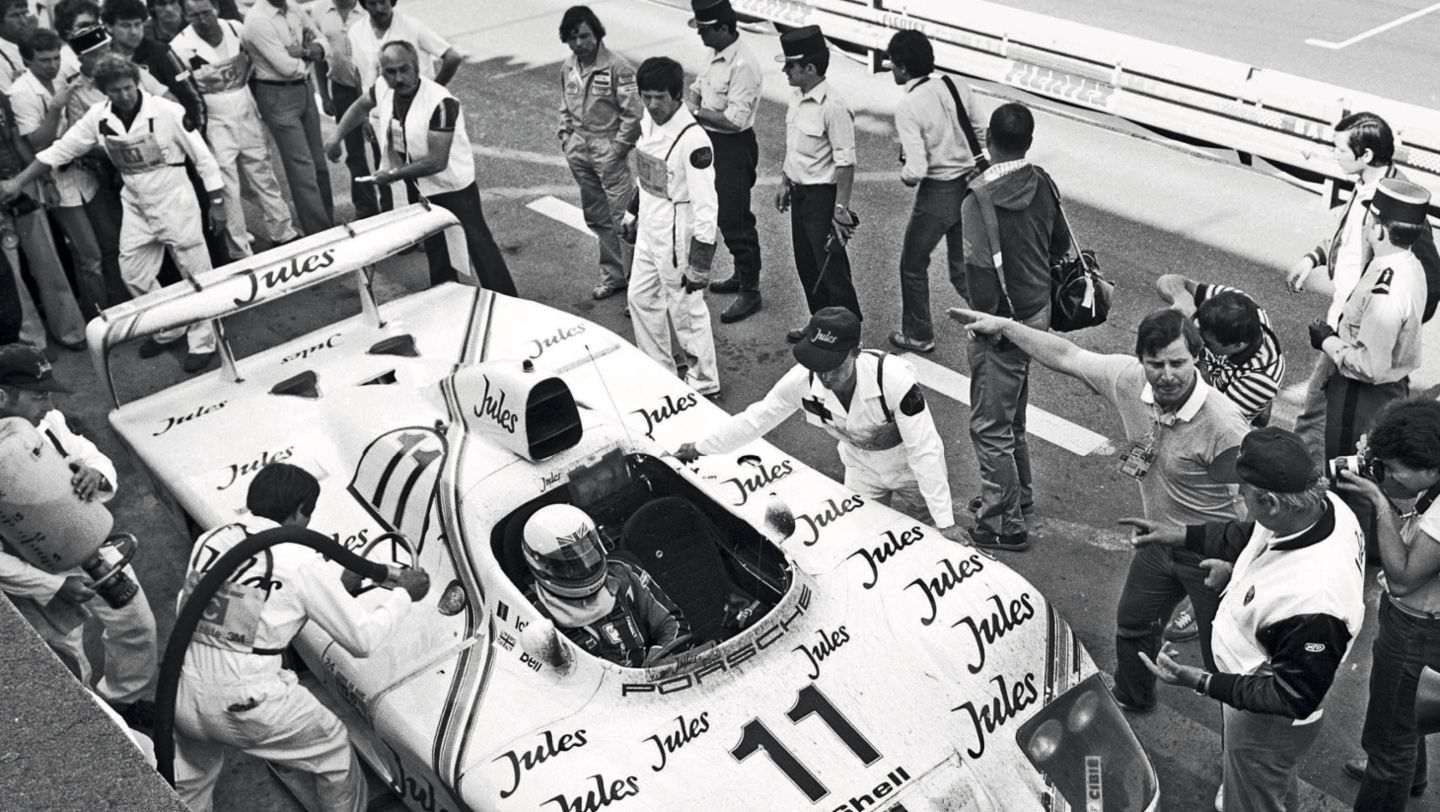 1981: “Our victories at Le Mans showed that turbos are fuel efficient and well engineered, which was crucial for the success of the production models.” 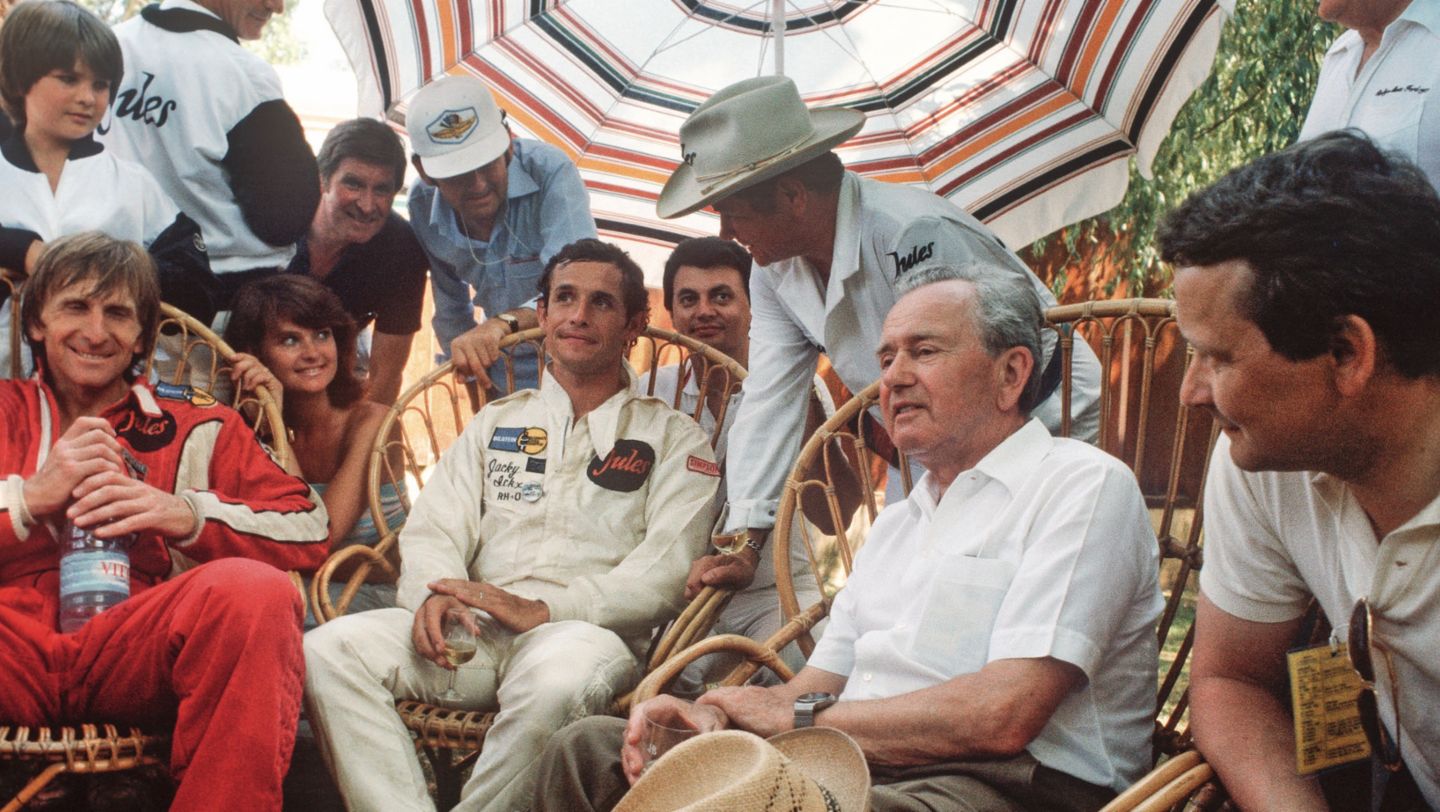 1981: “For me it’s not just about being there but supporting the entire Porsche team. I suffer through the mechanical issues and am thrilled when we succeed.” 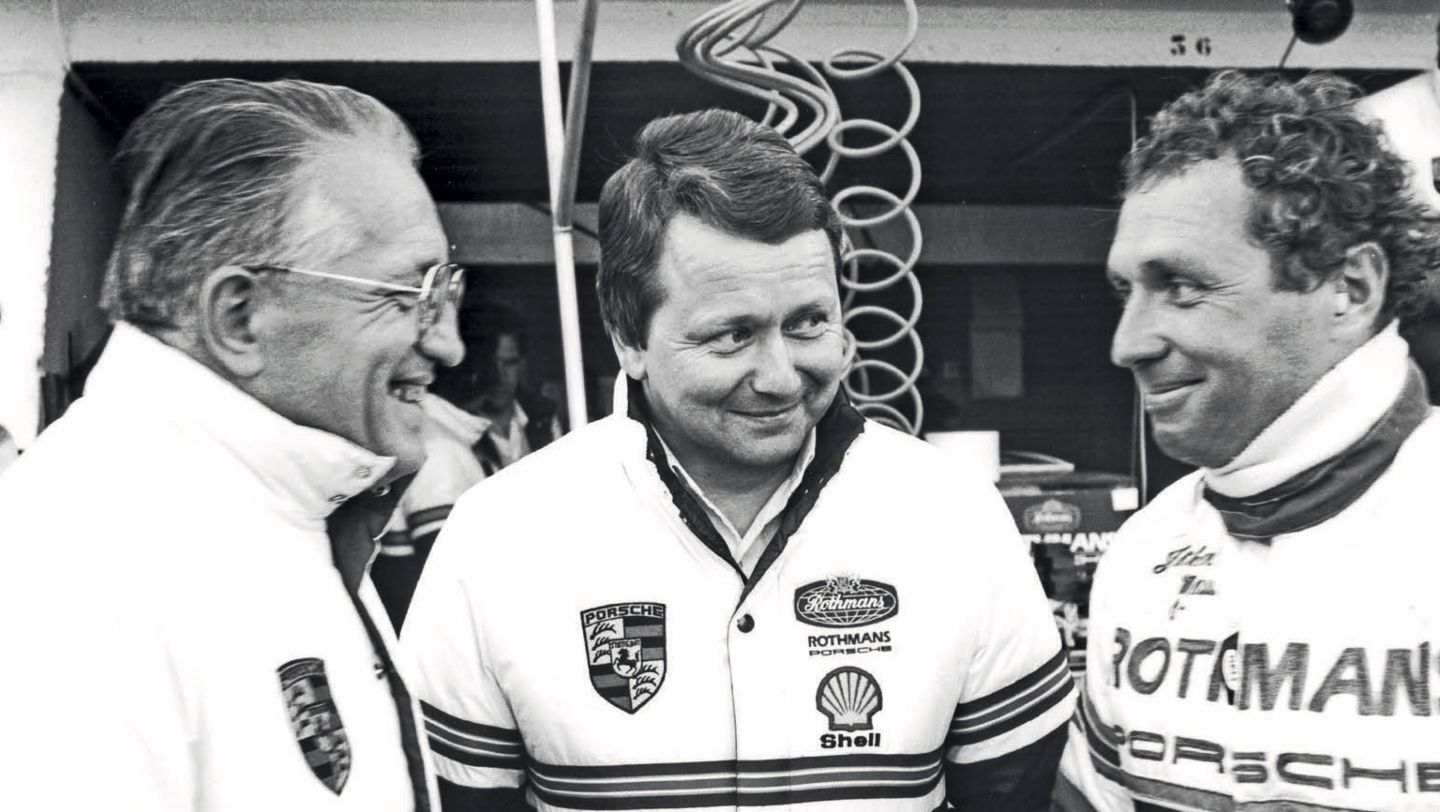 The next half a century brought eighteen more overall victories—too many to list individually. The race in 1976 holds a special place in Wolfgang Porsche’s heart: the Porsche 936 was the first turbocharged car in history to win Le Mans.

A few years into the energy crisis, debate was heating up in some countries over whether to ban cars, making this win all the more valuable.

They could boast: “We showed that turbos are fuel-efficient and well-engineered, which was crucial for the success of the production models.”

Porsche had only recently introduced the 911 Turbo as its first road-going production car with a turbocharged engine.

“Racing remains fundamental to Porsche. It’s in our genes.”

Close connections between racing and production continued when Porsche sent a factory team back to the top LPM1 class of the world’s toughest endurance race in 2014. Three overall victories in a row—in 2015, 2016, and 2017—continued to fuel Porsche’s story of success, not only at Le Mans.

Wolfgang Porsche spent those years cheering in the pit as well. “Racing remains fundamental to our brand. It’s in our genes,” he says. “And I’m happy to champion that cause in my position as Chairman of the Supervisory Board.” 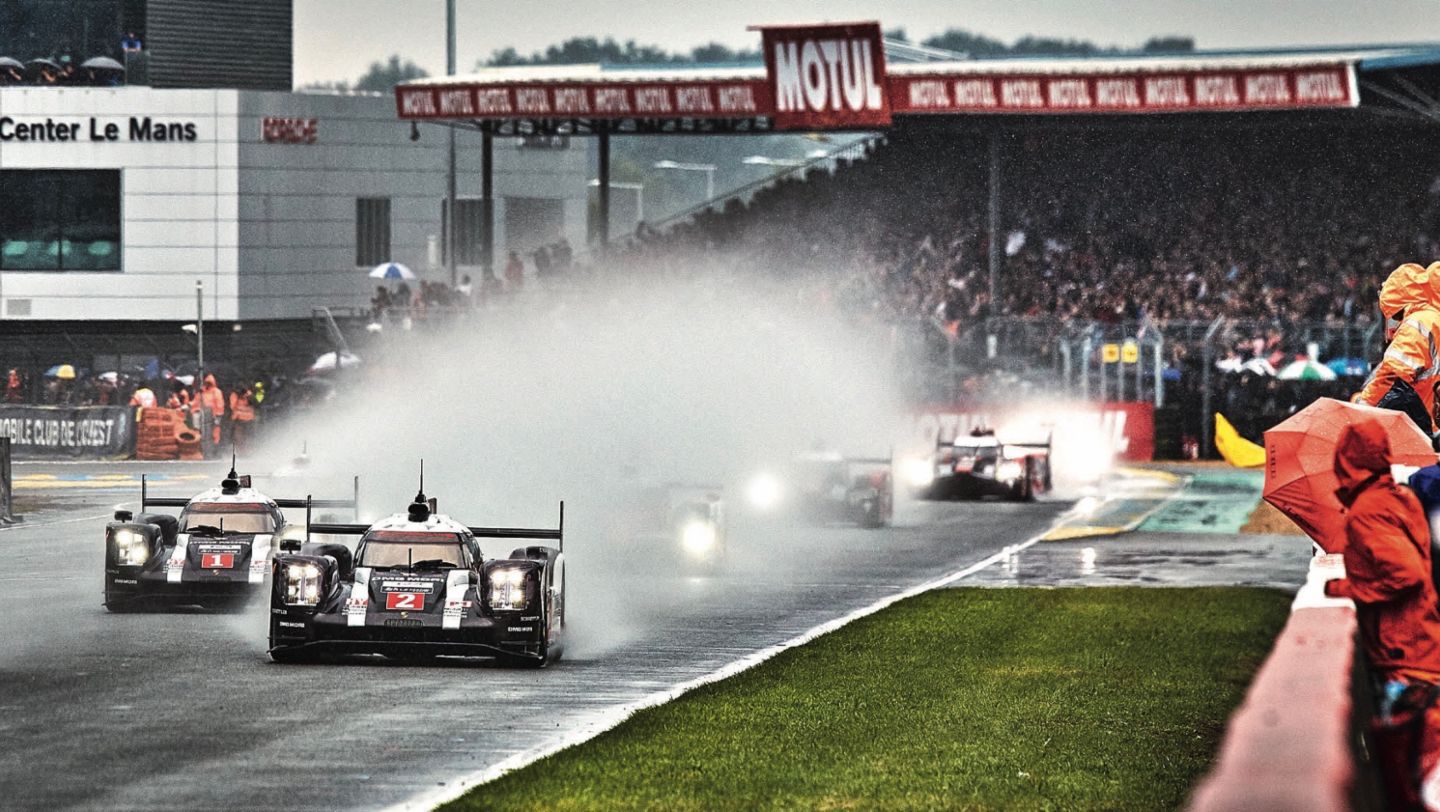 2016: “The end couldn’t have been more dramatic. The Toyota in the lead just rolled to a stop right when it passed the line for the final lap. That meant it dropped out completely, and we won in the last few meters.

I decided to go to the Toyota pit area and congratulate the team on their outstanding performance. I wanted to show that you should never lose respect for your opponents. Fairness is ultimately what sports are all about.”

He was also there with his team at the dramatic end of the race in 2016, when Toyota appeared sure to win, only to be overtaken by Porsche literally in the final meters.

“Anything can happen in those twenty-four hours.”

In 2017 he and the team went through the emotional ups and downs that only a twenty-four-hour race can offer. More than an hour was needed to change the electric motor on the front axle of the 919 Hybrid with start number 2. “It felt like we took the whole car apart and put it back together,” he recalls.

With what appeared to be hopeless prospects in the fifth hour of the race, Earl Bamber, Timo Bernhard, and Brendon Hartley then embarked on an unbelievable comeback. “Just a few hours before it was over, our number 1, which was in the lead, had to leave the race, and then the two Toyotas did too,” he says.

Once again, he felt sorry for the rivals but also delight at what had seemed an impossible victory for the underdog trio.

“Never give up—that’s the Porsche mindset. The race isn’t over until you cross the finish line.”

Hang in there and be there when it counts. Despite the end of the LMP1 era, Wolfgang Porsche still comes to Le Mans whenever his schedule allows.

“I’m excited about the performance of our GT cars,” he says. “That’s of great interest to me, because our customers drive in that class too. And nothing is more important to us than our customers.” Yes, Le Mans is a family affair—and every customer is part of the family.