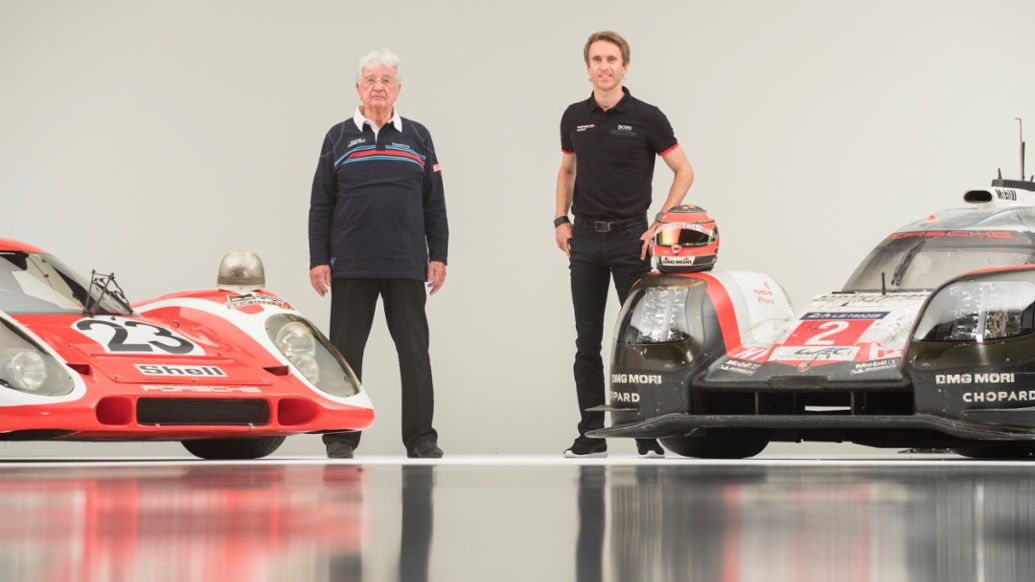 The 1970 victory in Le Mans over half a century ago is one of the most important motorsport successes for Porsche.

What better excuse for a meeting of the protagonists of old – and today: Hans Herrmann with his Porsche 917 KH and 2017 winner Timo Bernhard with the Porsche 919 Hybrid.

You just need to look at the helmets to appreciate the progress that has been made in motorsport. The old helmet: a delicate, grey half shell. It gives the impression that you could easily push it in. The new helmet: a brightly coloured high-tech piece of protection, with the perfect ergonomic shape – it looks as if even a blow from a hammer would bounce off it.

We are in a photographic studio in Friolzheim between Stuttgart and Pforzheim, and the atmosphere is sizzling. Not because of hot spotlights trained on the protagonists, but those involved: Hans Herrmann, 1970 Le Mans winner, standing in front of his original car from those days, the Porsche 917 KH, with his old helmet.

And Timo Bernhard, the latest Porsche Le Mans overall winner, with the 2017 Porsche 919 Hybrid and his helmet. All four are celebrated champions, the two drivers drove both the last and Timo also the first lap of their victorious races.

When such absolute giants meet, the first topic up for discussion is always the progress made in safety over the years.

“We still drove in pairs,” remembers the now 92-year-old Herrmann, adding with a wink: “The young guys today look lazy by comparison: they drive in threes. One of them can go and sleep for eight hours.”

But even then the differences in speed between the various classes were already dangerous: “the top speed of the slowest class was around 200 km/h. We flew past them at 384 km/h.”

“Motorsport is definitely still dangerous,” adds Bernhard, “but there’s no comparison between motorsport today and back then. Fear was a constant companion 50 years ago, that was no longer the case for us.” And

Herrmann remembers: “When I bought a tube of toothpaste back then, I used to stand in the shop thinking: ‘Hope you get to finish it.’”

The technology behind the cars

What the two protagonists mean is illustrated by the two race cars facing each other in the studio. The 917 KH with starting number 23, which started under the Porsche Salzburg name, weighs no more than 800 kilograms and was powered by a 4.5-litre 12-cylinder engine that drove the rear wheels at 580 PS.

The engine had to be warmed up for around ten minutes before the car was ready to race. The artificial resin skin is just 1.2 mm thick. Inside it is so tight that the driver’s helmet could touch the roof. A tubular frame protects against excess weight, but not against the consequences of possible cold deformation.

On the other side the much larger-looking 919 Hybrid, which two technicians and a race engineer had to prepare in a carefully choreographed affair lasting two hours before it could be allowed onto the circuit.

The record winner was a rolling test laboratory for future Porsche technologies: a 2-litre V4 turbo petrol engine with 368 kW (almost 500 PS) for the rear wheels paired with an electric motor with 294 kW (over 400 PS) for the front axle – making the Porsche an all-wheel drive.

The electric motor is supplied by a lithium-ion battery, which in turn is fed by the braking energy at the front axle and by exhaust gas energy. The driver does not really have a lot of space here either, but is much better protected.

The battle scars of the 2017 race car with starting number 2 are beautifully preserved with a clear-coat finish. The 917 is also original, by the way, even though it looks as fresh as the day it left the racing department.

“The 917 was the high-tech car of its time. With it Porsche showed how to build the best prototypes according to the rules of the time,” says Bernhard. “The same goes for the 919 Hybrid.

This was the car that Porsche used to show how technology for the road is developed in motorsport – just look at the Taycan.” Did Bernhard ever drive the 917?

“Yes, twice. Of course not at the limit, but still enough to get a good impression of racing back then.”

As a result, Bernhard now has even more respect for Herrmann and his team mates. And would Herrmann like to get into the 919? “My goodness, absolutely not.”

Le Mans – the measure of all things to this day

As much as the technology may have changed: “The enthusiasm for racing continues unabated,” says Bernhard with certainty.

“Le Mans has the same significance today as it did 50 years ago. But now it is one of the last motorsport adventures, because no other circuit layout combines a race track with public roads.”

Hans Herrmann also watches every race since he quit driving himself – including every Formula 1 race. Consistency is key – as it is with everything in life: “After my close second place in Le Mans in 1969, I decided to retire from racing in 1970. I had promised my wife that too.

“No one knew at the time. The fact that I was able to actually finish my career with the win in Le Mans and one of the most important successes for Porsche was of course very nice.”

The highs of the racing drivers

The many dangers and upsets must have their upside. Bernhard loves to tell the tale of his then 85-year-old lady neighbour, who sat in front of the television for the whole night when he drove the Sarthe course and afterward said: ‘Mr. Bernhard, you kept me up all night, I just couldn’t switch off…’.

“This is a great example of how racing captivates people who wouldn’t otherwise have anything to do with motorsport,” says one of the world’s best racing drivers, who has been a brand ambassador for Porsche since 2020.

The time comes to leave Hans Herrmann and Timo Bernhard to themselves. The two must surely have more stories to tell.

A total of 19 overall victories, 108 class successes and indescribable emotions have linked Porsche with the 24 Hours of Le Mans, the greatest and longest-established motorsport event in the world, for more than six decades.

This makes the Stuttgart-Zuffenhausen sports car manufacturer the most successful marque in the almost 100-year history of Le Mans. On 14 June 1970, Porsche took the first overall victory there in the 580 PS 917 KH sports car.

At the 85th 24 Hours of Le Mans in 2017, Timo Bernhard together with his teammates Earl Bamber and Brendon Hartley took the flag after a dramatic race in the Porsche 919 Hybrid.