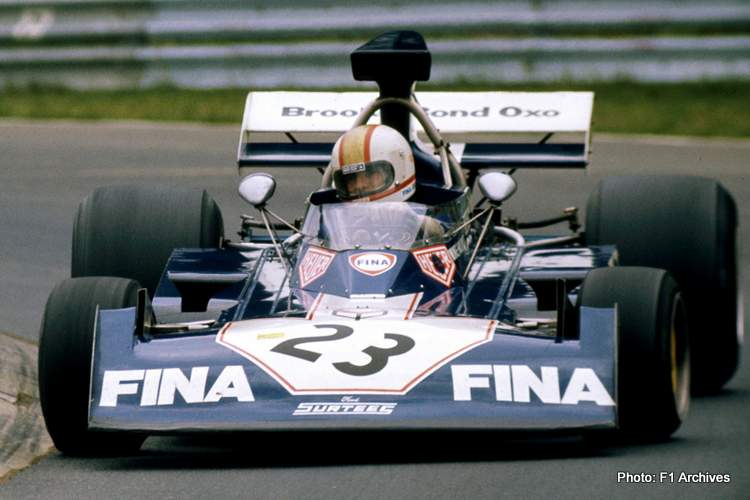 Many books and very, very many features have been written about Mike Hailwood, who is still considered by many as one of the greatest motorcycle racers of all time.

‘Mike the Bike’ Hailwood made his Formula 1 debut at the 1963 British Grand Prix at the wheel of a Reg Parnell Racing Lotus 24. At the time Hailwood was at the very height of his legendary two wheel career where he remained until 1967.

In 1971, with his grand prix motorcycle racing days behind him, Hailwood did two Formula 1 races with Team Surtees, ahead of a full season in 1972 at the wheel of the Brooke Bond Oxo Team Surtees TS9B.

He scored his best result at the Italian Grand Prix that year when he finished second to the Lotus of Emerson Fittipaldi.

Hailwood would never match his remarkable two wheel exploits in Formula 1, and only scored one more podium – third place at the 1974 South African Grand Prix at the wheel of a Yardley Team McLaren McLaren M23.

Hailwood was recognised for his bravery when in the 1973 South African Grand Prix when he pulled Clay Regazzoni from his burning car. Hailwood’s race suit caught fire in the process, and after being extinguished by a fire marshall he returned to help rescue Regazzoni.

Hailwood was awarded the George Medal, the second highest gallantry award that a British civilian can be awarded.

He retired from Formula 1 after being injured badly at the 1974 German Grand Prix at the Nürburgring.

On 23 March 1981 Hailwood had left his home in Tanworth-in-Arden, with his two children, Michelle and David, to buy fish and chips. On their way home a truck collided with the car, killing nine-year-old Michelle instantly. David survived, but two days later Mike died in hospital due to internal injuries. The truck driver was fined £100.

We pay tribute to the legend with images form his days as a Formula 1 driver.